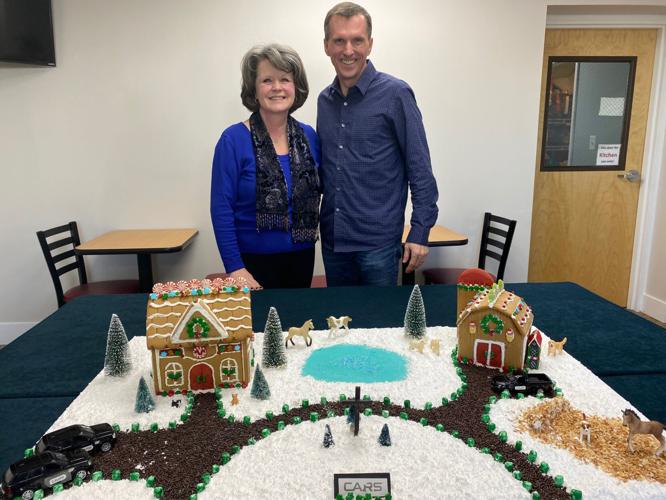 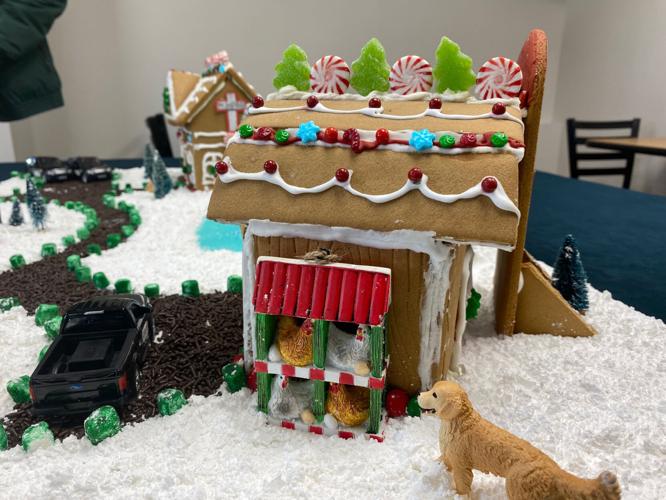 The farm-inspired creation includes a chicken house along with dogs and cats and a place for horses. 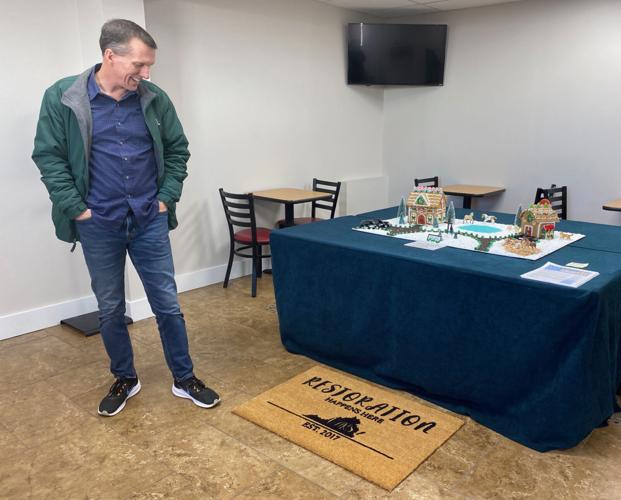 Pastor Mark Jenkins looks at the welcome mat given by his daughter for the up and coming CARS recovery center for women in the region. 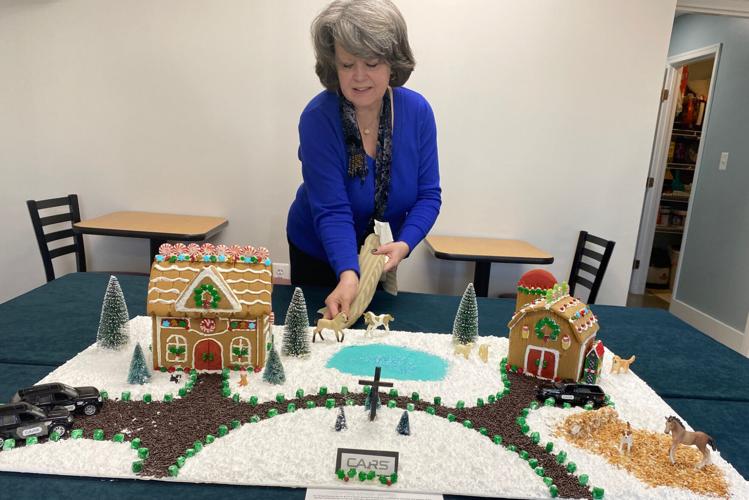 Jeanne Nixon touches up the powdered sugar on her gingerbread creation. It won Most Creative in a recent contest held by Cornerstone Realty. 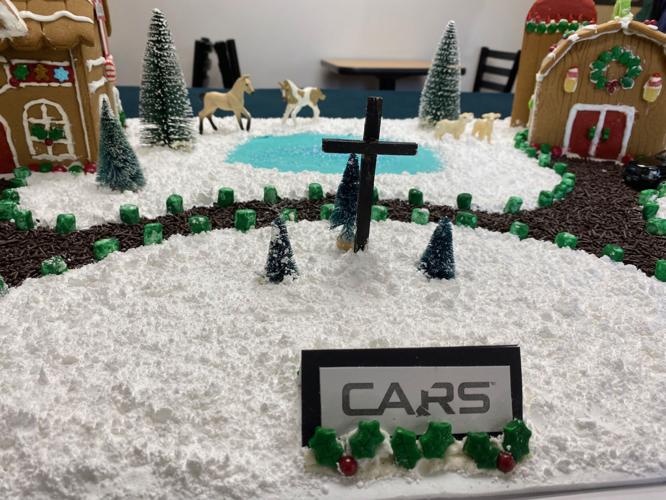 A sugarland depiction of the up-and-coming CARS Recovery Center for local women won Most Creative in the recent gingerbread contest of Cornerstone Realty.

A powdered sugar gingerbread dream for a CARS recovery home for women in the area, created by Steve and Jeanne Nixon. 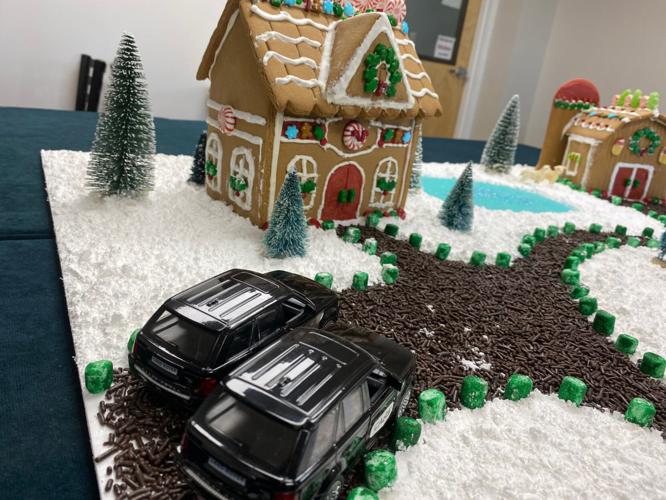 A chocolate sprinkles walkway at the gingerbread depiction of the CARS recovery center for local women.

A sweet dream in powdered sugar with a chocolate sprinkled path, one woman’s recent gingerbread depiction of the CARS faith-based recovery home for local women visualizes what could be for those struggling with addiction.

Culpeper County resident Jeanne Nixon, with her husband, former supervisor Steve Nixon, created the farm-inspired imagination of how the Christ-Centered Addiction Restoration Services campus might look once built. It was for a gingerbread house contest held in December by Cornerstone Realty.

“It’s such a dream of mine because we’ve had a front row seat to addiction, recovery and the fallout,” said Jeanne Nixon, who runs a local jail ministry.

She created the gingerbread recovery home to help others envision it. The CARS entry won “Most Creative” and was on display over the holidays at Mountain View Community Church, where Nixon has been a member since its founding almost 20 years ago.

CARS, associated with MVCC on Rogers Road in Culpeper, currently runs faith-based, weekly RESTORE (herestores.com) group meetings in Culpeper, Rappahannock, Madison Green and Warren counties. The dream, since forming in 2017, has been to open a recovery home, and it’s close to materializing.

Nixon, for the past 10 years, has visited in the local jail through a church ministry with women who would greatly benefit from such a residential offering. She has seen them die from addiction, and the pain has endured.

“We’ve had as many as 20 people in the jail library, packed, sitting on the floor,” she said of pre-COVID times. “We got to go back recently and the ladies were just so broken, been so long since we been and they haven’t had any spiritual care and support face to face that it really meant a lot to them.”

“Because they have children, like one of them, their daughter is cutting, which Brian’s daughter was cutting. God just allowed us to be in the jail and unfortunately, we’ve lost several of our young ladies over the last 10 years, one really dear one last year in February,” she said.

“So it’s always on our hearts where are we going to send our girls when they get out and it’s 5 degrees outside?”

An estimated 90% of the women in the jail are there with an addiction problem, Nixon said.

“Shoplifting, getting high or overdosed, whether they were prostituting, whatever, it all comes down to addiction. And beyond the addiction is abuse and heartache and heartbreak and broken families and these young ladies have just been through unspeakable things, like it is so huge, but just for the grace of God it could be me, our children, and I’m a mom,” she said. “I would rather die today than watch my children die and so many parents are burying their children and children are burying their parents.”

Nixon returned to the young woman she met in the jail who died. She had four daughters. Her second to youngest daughter lost her mother and father in a five-month period, Nixon said.

“Now this little child—can you imagine the pain—she is right at about 7- or 8-years-old, so she remembers her parents and she knows they’re gone. Then she’s got to deal with all that,” she said. “This addiction thing is impacting the entire family all of the time that our ladies are locked up and away from their children; are abandoned emotionally, physically.”

Everyone knows or has someone in their family who drinks too much, that is starving themselves from not eating, that’s cutting, that’s abusing alcohol, Nixon continued. It’s out of the scope of what most parents can handle.

The CARS recovery home for women is a starting point, and Nixon wanted to imagine what it could be and help others in the community visualize it—in gingerbread and candies, with close attention to detail.

“We need horses for horse therapy and fur love, like puppies and kitties. I’m probably stressing Pastor Mark out,” Nixon said while at the church with Pastor Mark Jenkins, CARS president. “I love to be by the water. We all need peace and quiet,” she said of the pond included on the gingerbread campus along with chicken and lambs.

An earlier site for the CARS home was on a farm setting, Jenkins said, and it’s still a possibility. He said many of the relationships with the women at the RESTORE group meetings started through the jail ministry.

“This is about addiction recovery,” Jenkins said, describing results from the meetings. “We’ve seen people get saved, people overcome addictions, Greene County just had a proposal. Two people who have found restoration in the group he proposed—a first for us to see. But to see there is life after addiction is one of the most beautiful thing we get to witness.”

A 40% down payment on the CARS recovery home is required in order to launch the initiative. Jenkins said they will reach that goal this year, with continued donations, like the $53,000 Welch helped to raise when he came to Culpeper last year to shine a light on addiction through his personal story.

The home will start with a half-dozen women who will stay seven months to a year before taking another step to an Oxford House group home, for example, the pastor said.

“A lot of addiction recovery homes will have internships for year two, stay on and help for another year, there comes your cost for that, learning, now they’re pooling into somebody else,” Jenkins said, noting, “Peer recovery specialists can do things that I can’t do because they walked the road.”

“Look, it’s got a barn, horses, we always like the equine possibility onsite or somewhere else if Lord opens that door so be it,” Jenkins said. “Right now we are asking, ‘Lord, show us a home that you can afford, you can afford anything, Lord,’ that we can use to get started.”

The pastor got emotional talking about a Christmas gift his 22-year-old daughter gave him, a welcome mat custom made with the lettering, “Restoration starts here, CARS, est. 2017.”

“She said, ‘Daddy, when you get the house, the women will have the door mat.’ The fact of the matter is this church — like everyone else — we’re full of broken people. I’m one of them and we need each other, we need the Lord,” Jenkins said of Mountain View being “recovery sensitive.”

“It’s OK to not be OK, but you don’t want to stay that way, we want to do our part. We’ve had friends die, she’s seen plenty of women, we have pictures,” the pastor went on.

“I’ve had friends ask for beds. We didn’t have beds for them and they wind up dead in Albemarle County and when the attorney in town says, ‘we have no beds,’ that’s what we’re trying to do. We believe that, through Christ and a safe place, people can be restored out of the desolation of addiction.”

Support the effort at herestores.com

Sierra Rodriquez dreamed of being in the military since the age of 9 and now she’s breaking boundaries aboard the USS Harry S. Truman.

Civil War general's remains come back to his hometown

The final resting place of Civil War Gen. A.P. Hill has been anything but that, as his remains were put in the ground, dug up and moved, three…

The Antioch Baptist Church hosted an induction ceremony for new officers of the Culpeper chapter of the NAACP.

Residents of all ages are encouraged to decorate their finest Valentine and drop it off or put in the mail to the new Prince William County district office of 7th District congresswoman.

Attendees of a recent celebratory brunch at a downtown Culpeper restaurant were treated to a meal, a drag show and lots of dancing.

Check out these charts that show current COVID-19 variants in the area, vaccination rates, and more.

4 charts that show where home sales are headed in Virginia

Are prices headed up or down? Where are the hotspots for buyers and sellers? Find out with these charts and graphs, updated weekly.

The farm-inspired creation includes a chicken house along with dogs and cats and a place for horses.

Pastor Mark Jenkins looks at the welcome mat given by his daughter for the up and coming CARS recovery center for women in the region.

Jeanne Nixon touches up the powdered sugar on her gingerbread creation. It won Most Creative in a recent contest held by Cornerstone Realty.

A sugarland depiction of the up-and-coming CARS Recovery Center for local women won Most Creative in the recent gingerbread contest of Cornerstone Realty.

A powdered sugar gingerbread dream for a CARS recovery home for women in the area, created by Steve and Jeanne Nixon.

A chocolate sprinkles walkway at the gingerbread depiction of the CARS recovery center for local women.