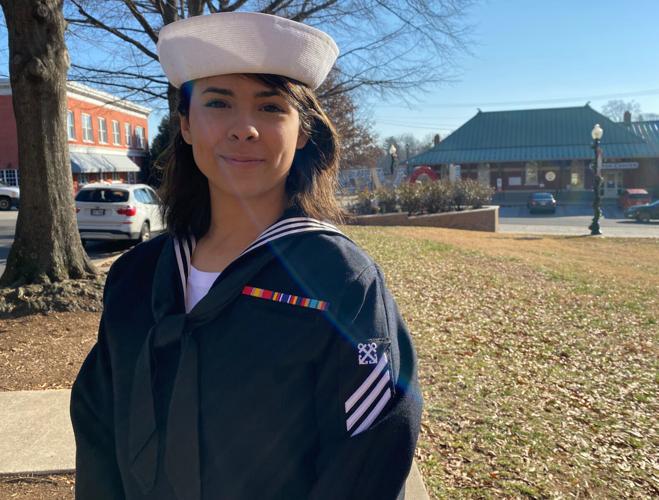 Sierra Rodriquez, who dreamed of being in the military since the age of 9, is now a boatswain’s mate on the USS Truman. 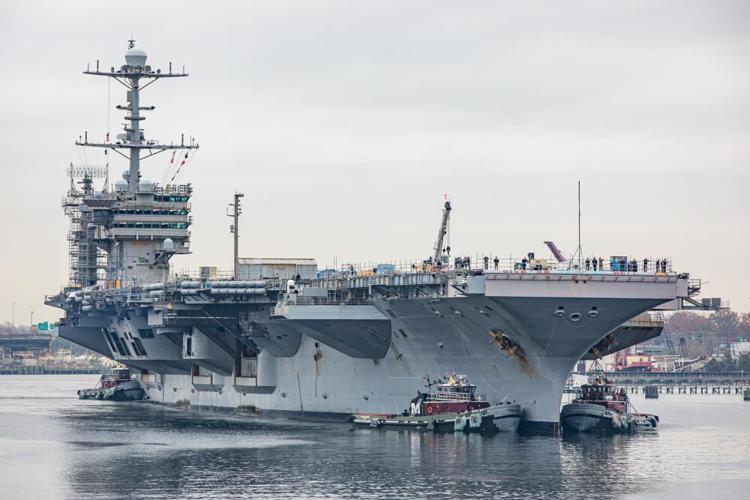 The Norfolk Naval Shipyard welcomed the USS Harry S. Truman back on Sept. 12. It is currently in Portsmouth for extended maintenance. 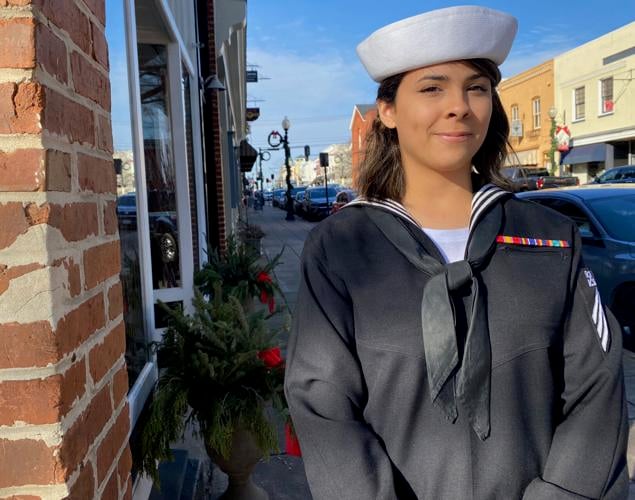 US Navy boatswain’s mate Sierra Rodriquez visited her hometown in December. She graduated from Culpeper County High School in 2018 and enlisted into the Navy in 2021. 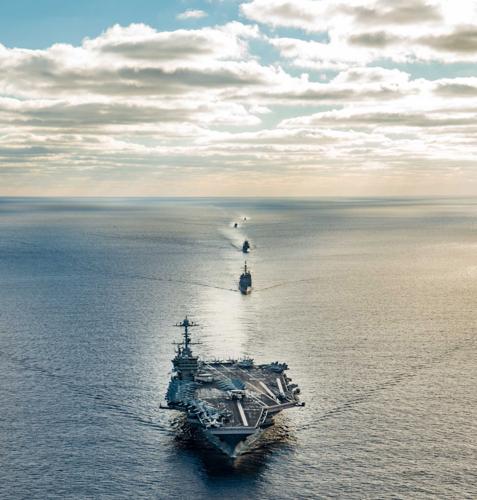 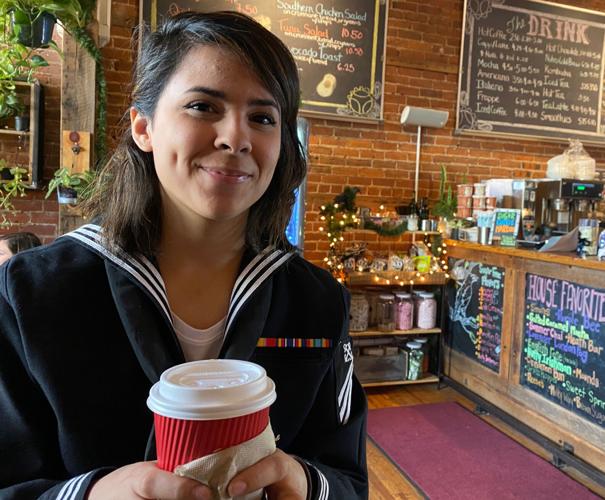 US Navy boatswain's mate Sierra Rodriquez, visits her hometown of Culpeper in December, enjoys some chai tea at Raven's Nest Coffeehouse during an interview.

U.S. Navy Boatswain’s Mate Sierra Rodriquez dreamed of being in the military since the age of 9 and now she’s breaking boundaries aboard the USS Harry S. Truman, a Nimitz class aircraft carrier currently at dock in Portsmouth.

In December, the 2018 graduate of Culpeper County High School reflected on the physical work maintaining the nearly 1,100-feet-long ship, her first deployment at sea to Europe on a key mission, the life voyage that brought her to the navy and why she plans to make it her career.

“A dream come true,” said the 22-year-old of being out on the open ocean, on Dec. 20 at Raven’s Nest Coffee House on East Davis Street.

“I love water…I wake up every day, oh what am I going to see today? More water. Seeing the waves, how water works, the history of how the water got there. I saw sharks, dolphins, a whale, a squid, stingrays, turtles, it was great.”

Rodriquez grew up in a military family — both of her parents were in the Army — and she knew early on she would follow in their path. It was not always easy growing up with her dad away on deployments and coming home changed and distant, the sailor said. The family lived in Manassas for a while and Rodriquez joined the Army JROTC program in high school there.

She was active for two years in the CCHS Marine Corp JROTC program when they moved to Culpeper. The sailor said it helped prepare her for the real thing and gave support when she needed it.

“I had a learning disability and once he figured that out he helped me out, study a little bit more, understand the curriculum and with his teaching helped me pass each test and I got promoted,” she said of a major who led the program at the time. “I graduated as a corporal…we became a family,” Rodriquez added of her time in JROTC, saying it’s the only part she misses about high school.

She opened up about being bullied in high school and wanting to prove to them and her father what she’s made of, as a reason for joining the military.

Rodriquez traveled after graduation and was working at a local brewery, living at home. She felt like her life was going nowhere. That was about to change.

“My best friend, Desiree, she’s in the Marine Corps…she helped me out and I was at an all-time low, she was like, ‘I got you,’ ” she said.

Rodriquez enlisted in the Navy on June 23, 2021, and based on her entrance exam results, was assigned a potential job. It wasn’t what she expected.

“The system was down so the only choice I had was culinary specialist, in the kitchen, and I was like, I don’t want to do that,” Rodriquez said.

A week later her recruiter called her with another offer.

“Boatswain’s mate—what do they do? He told me all about it and that his fellow shipmates do that exact same thing. I was like, yeah sounds really cool, sounds like a lot of work. I like to work, so sign me up,” she said.

But first came10 weeks of boot camp at Great Lakes in Illinois. Rodriquez thought she was prepared for it, but it turned out differently.

“I knew there was going to be a lot of yelling, especially the first few weeks so I kind of built myself up for that, but the fact that they’re in your face was—I can’t get that sound out of my head,” she said. “We did get beat a lot, we got IETs, intensive exercise training, you do a lot of pushups…It was horrible, but I did lose a lot of weight.”

Her favorite part of boot camp was entering “the gas chamber,” where recruits undergo an intensely noxious part of training.

“Each row had to lift up their mask, turn on the gas in your face, tear gas—it’s horrible,” Rodriquez said laughing, maintaining it was the best part. “It had to be because when my mom was in the Army she had a video of her being in her battalion in the gas chamber and it looked really cool and really fun—not going to lie.”

She thanked her mother, De’Onna Lee, for always supporting her in the military and never giving up on her, especially during the hard times when being on deployment.

Rodriquez graduated boot camp in September of 2021 and continued training nearby while waiting for her orders, which eventually came: Norfolk and the USS Truman. Rodriquez caught up with the ship in February 2022.

The naval aircraft carrier was on a nine-month deployment in response to Russia’s unprovoked invasion of Ukraine, according to a Department of Defense news release at the time.

“I finally got shipped out to my ship and that’s where my life started,” she said.

A boatswain’s mate does maintenance and preservation on the ship.

“Let’s say there is a hole on the hull of the ship, it’s our job to fix it. We do a lot of line handling to pull the ship into port and as we are going underway, we take all those lines in—one of my favorite duties. It gives me adrenaline and is a good workout,” Rodriquez said, of the approximate 20 others in her majority male crew, also responsible for the anchoring.

“We do a lot of painting and cleaning, it gets very tiring…you are learning more and more every day and I am, really. I think I know more than I should.”

She can also weld, as was recently highlighted in a US Navy hometown photo which ran in the paper in December. On deployment last year aboard the Truman, they stopped in Naples, Italy, Marseille, France and Palma, Spain. She visited Mount Etna, one of the world’s most active volcanoes.

It’s been a rewarding experience so far, the young sailor said.

“The people I serve with help me get through the good and the bad days,” Rodriquez said. “Being on an aircraft carrier, I feel honored to be part of such an important responsibility and mission.”

The military has its challenges as well, especially being a female, she said.

“It’s hard because all the males look down on us. A few times when I was in charge and I would tell some guys to do what they’re supposed to do and they’ll just tell me, ‘How about you go work in the kitchen? You’re good at that,’ or ‘Go clean a compartment,’ or they just won’t listen to me. So being a woman in the Navy, the military, is really hard because nobody takes you seriously.”

Rodriquez said she sucks it up and gets more serious. It makes her want to work harder.

The USS Truman completed its mission and arrived back in Norfolk on Sept. 12 before a short voyage on Dec. 8 to Portsmouth for extended maintenance. A small portion of its crew is now living full-time in a recently-outfitted 609-berthing barge across the pier, while the ship is repaired. The rest of the crew will use it when they have ship duty, about once a week, according to a Nov. 22 story in The Virginian-Pilot.

According to a U.S. Department of Defense release at that time, preparation for the Truman maintenance mission began over a year ago, alongside Norfolk Naval Shipyard project management and trade professionals.

“The diligence and dedication our crew exemplified during deployment, combined with our opportunity to serve alongside (shipyard) professionals, will be key in completing the modernization and repairs needed for Harry S. Truman to return to sea and ready for national tasking,” said USS Truman Commanding Officer Captain Gavin Duff in the release.

“It is also a chance for our team to focus on their personal and professional development as they reinvest in themselves.”

Rodriquez said they’ll deploy again in 2024 and was having fun catching up with friends and family over break. She had 10 days off around Christmas, but was looking forward to getting back to the hard work.

“I’ve always been that scrawny, skinny sibling—brother, sister a tad bigger than me—they always pinned me down, as siblings do, when we were younger and I just wanted to build myself up,” she said. “At first it was really exhausting but now it’s more of an enjoyment, like my adrenalin starts rushing. I love this.”

Being in the Navy has been life-changing, Rodriquez added. She loves the water and being around the planes that land on the carrier.

“When you’re on watch, on lookout, you sit outside, feel the wind—sometimes it sucks we hate the wind—but just sit there and admire everything,” she said.

Being on watch means looking out for any enemy or air contacts and sea life, the sailor said. Without saying too much, Rodriquez said there were some scary moments.

She said the Navy has given her a voice. Rodriquez signed up for five years.

“But (I’ve) been in the Navy now for a year and I am planning on extending that. I want to reenlist and see where my life goes,” she said.

“I feel like it’s the best thing that has happened so far, good days, bad days, but it’s my life, it’s always going to be like that, even as a civilian, so suck it up buttercup, get on with it.”

Crews with the Virginia Department of Transportation will be on duty overnight as light snow, sleet and freezing rain are forecast for the are…

Civil War general's remains come back to his hometown

The final resting place of Civil War Gen. A.P. Hill has been anything but that, as his remains were put in the ground, dug up and moved, three…

Paleontologists accidentally discover the first brain ever known to have evolved

Sierra Rodriquez, who dreamed of being in the military since the age of 9, is now a boatswain’s mate on the USS Truman.

The Norfolk Naval Shipyard welcomed the USS Harry S. Truman back on Sept. 12. It is currently in Portsmouth for extended maintenance.

US Navy boatswain’s mate Sierra Rodriquez visited her hometown in December. She graduated from Culpeper County High School in 2018 and enlisted into the Navy in 2021.

US Navy boatswain's mate Sierra Rodriquez, visits her hometown of Culpeper in December, enjoys some chai tea at Raven's Nest Coffeehouse during an interview.