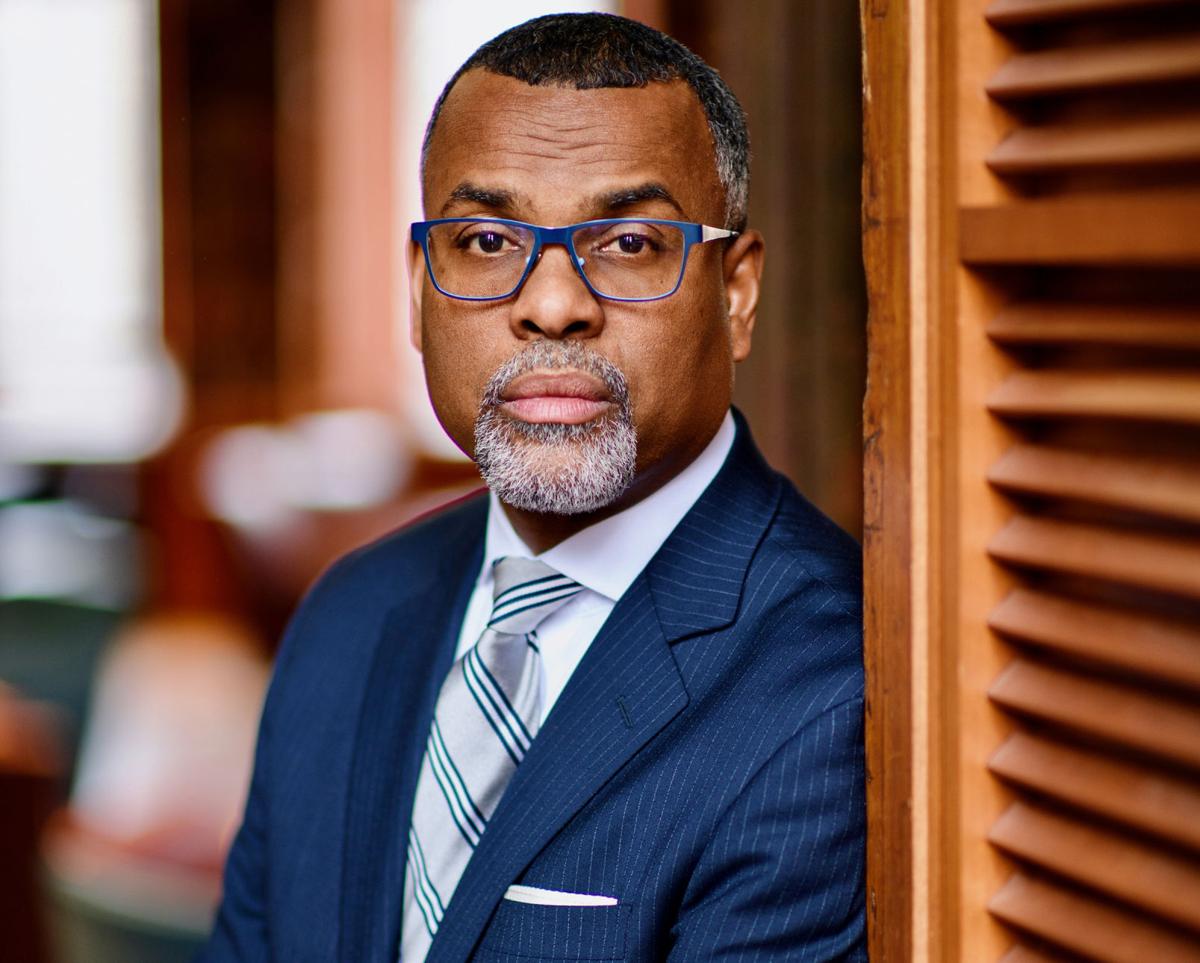 American writer James Baldwin is seen in 1983 at his home at Saint Paul De Vence on the French Riviera. He spoke to The Associated Press of his life and work and America’s continuing racial problem. 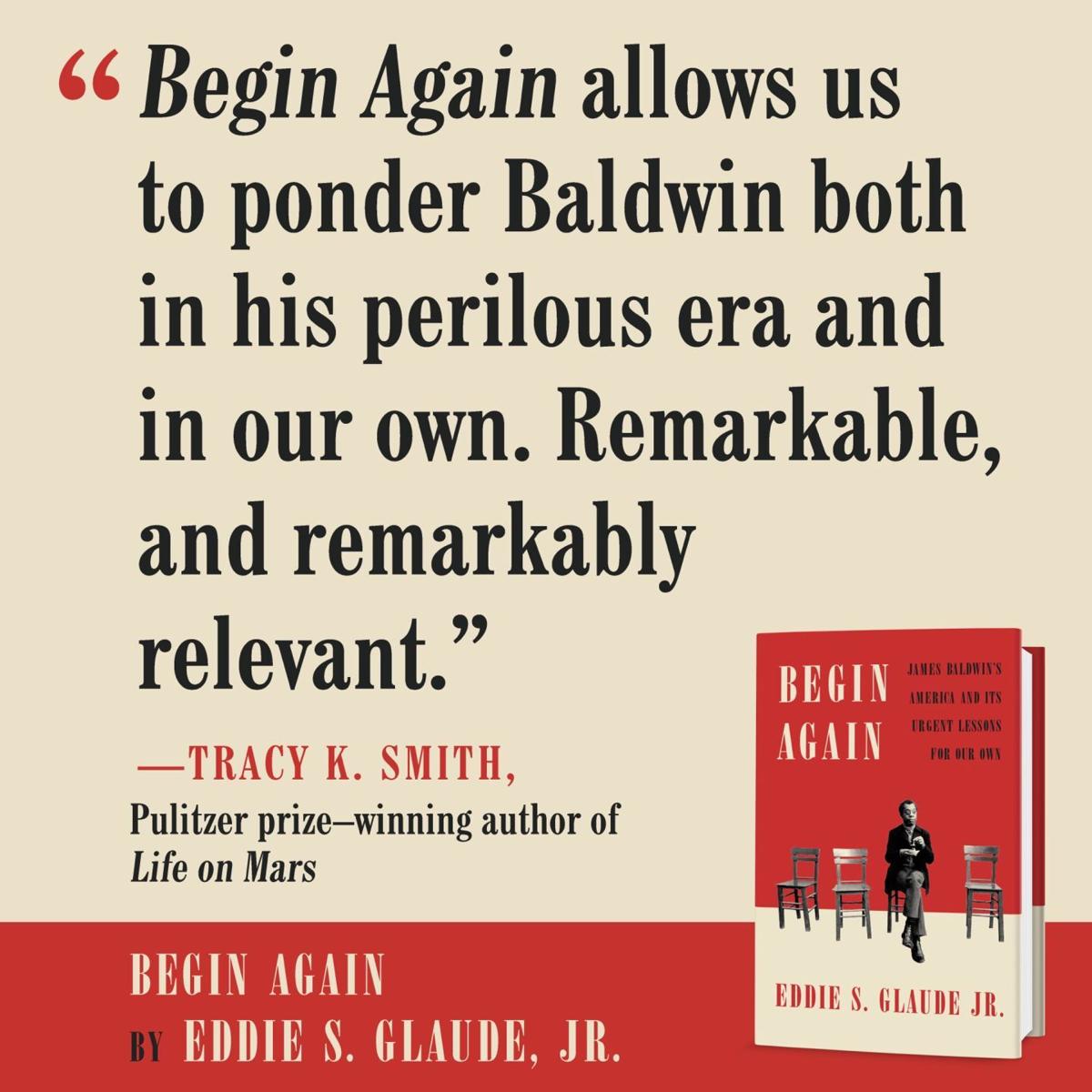 Both critic and motivator, Eddie S. Glaude Jr. doesn’t beat around the bush.

Americans, he says, have a lot of hard work to do to repair the fabric of our nation. Together.

But if they’ll have frank conversations and act on them, Glaude is hopeful about what may lie ahead. A realist about human foibles, he still has faith in people’s capacity for growth.

This Friday, the bestselling author, educator and political commentator will share his thoughts on white supremacy, the Black Lives Matter movement, the U.S. Capitol siege, and what to expect from the Biden administration on social justice. Germanna Community College invites one and all to take part in the Zoom discussion at 7 p.m. Friday, as part of its Black History Month celebration. Register at germanna.edu/bhm.

Glaude challenges everyone to examine our collective conscience “not to posit the greatness of America, but to establish the ground upon which to imagine the country anew,” his speaker’s bureau says.

He has the fervor found in good preachers and great teachers, a conversation reveals. “We’re at a crossroads, to use a blues metaphor,” he said in an interview this week.

Events have shown that Americans need to renegotiate what our obligations are to one another, Glaude said: “If we’re Americans, nobody should go hungry. Nobody should go broke because they’re sick. Everyone should at least have the ability to earn a living wage.”

The Princeton University professor’s current book, “Begin Again: James Baldwin’s America and Its Urgent Lessons for our Own,” is a New York Times bestseller and was named one of the best books of 2020 by The Washington Post and TIME magazine. In it, Glaude traces author James Baldwin’s disillusionment at the civil rights movement’s failure to force America to confront its lies about race, and asks what can people today learn from his struggle.

In the crucible of Baldwin’s late life, he suggests, we can find promise and a path through our own difficult times.

As his publisher sums it up, “ ‘Begin Again’ is Glaude’s endeavor, following Baldwin, to bear witness to the difficult truth of race in America today. It is at once a searing exploration that lays bare the tangled web of race, trauma, and memory, and a powerful interrogation of what we all must ask of ourselves in order to call forth a new America.”

A respected scholar of religion, Glaude is the James S. McDonnell Distinguished University Professor and chair of Princeton’s Department of African American Studies. He regularly contributes to TV programs such as “Morning Joe,” “Meet the Press,” PBS NewsHour and “Deadline Whitehouse with Nicolle Wallace.”

Glaude has expressed concern that Americans don’t have a robust conception of the public good, and that liberty has become a synonym for selfishness.

“We have to figure out how to be together, differently,” he said. “And there has to be some kind of baseline moral and social contract if we’re going to live together. It cannot simply be that you are free to do whatever you want to do, no matter its consequences.”

Provocatively, in a TV news segment broadcast on Christmas Eve, Glaude said that “America is broken.”

Since then, he noted, national poet laureate Amanda Gorman, in her remarks at President Biden’s inauguration, disagreed with him in some ways.

“She said, ‘America isn’t broken, it’s just not finished,’ ” Glaude said. Then he elaborated on his thinking.

“The top one-tenth of a percent are getting richer in the midst of unimaginable death. Our schools are broken. We’re not educating all of our children,” he said. “... When we look at the labor market over the last 40 years, we see that the wages of everyday, ordinary people have barely ticked up. But for the most part, they’ve been flatlined.”

And as the COVID-19 pandemic has killed 465,000 Americans and infected 27 million, the U.S. health-care system has been revealed to be fraught with many inequalities and inequities, Glaude said.

Government is in no better shape, he said. Just a few years ago, Glaude recalled, people worried about “the imperial presidency,” that unlimited executive power could threaten democracy if given to someone not committed to the norms of democracy.

“People said that was going to bite us in the behind, and it did,” he said.

Congress, too, is in trouble. Gerrymandering has injured “the people’s House,” Glaude said, and its own members say the U.S. Senate, once considered the world’s greatest deliberative body, is broken.

“The institutions of government seem to be broken,” he said. “We are all in our silos, with different information streams driving how we assess and understand the world. So you have selfishness and greed, along with death, combined with a deep distrust in democracy and, in some ways, what feels like the collapse of our institutions. And doubt around the norms of democracy. Then you combine that with a deep sense of loneliness, having everything to do with the first part: Selfishness. Greed. death.

“We’re not simply ‘bowling alone’ these days, to use Robert Putnam’s language,” Glaude said. “Our eyes are either stuck to these devices or we are locked up in our homes or we’re hidden behind masks. Our relationships to each other are mediated by various social-media platforms. America doesn’t feel right.”

Then, he alluded to his boyhood in Moss Point, Mississippi, which he left at age 16 to begin studies at the Morehouse College, the historically black school that was the alma mater of Dr. Martin Luther King Jr.

Calling himself a country boy from the coast, he used a weather metaphor to discuss the nation’s current condition. “Whenever there’s a big strong hurricane, your house may survive, but you gotta do stress tests to see where the leaks are coming or if there’s been structural damage,” he said. “We gotta check. Because America is in trouble, it seems to me.”

But he’s hardly given up on his country. Far from it.

“I find hope because I have a fundamental and abiding faith in us,” he said. “Human beings, as Baldwin suggests, are at once disasters and miracles.

“I’m not talking about engaging in a kind of litany of our past sins,” he said. “What I’m talking about is to think of the country as not being the ‘shining city on the hill,’ but actually being a fragile experiment in democracy. Our history reveals that, over and over and over again.

“So part of what it means to imagine ourselves otherwise is to confront who we actually are, and the monstrous things that we’ve done, alongside some of the extraordinary things that we’ve done. The confrontation with the past is really about a confrontation with the present, because the past is already in us. It’s here. It’s alive and moving us about, whether we are conscious of it or not,” Glaude explained.

“So part of the work that needs to be done is to understand—and this is very hard for folk to wrap their minds around—there’s nothing redeemable about the idea of whiteness,” he said. “What I mean by that, is there’s nothing redeemable about the idea that white people ought to be valued more than others. There’s no way you can salvage that notion. But that doesn’t mean we are irredeemable.

Clergy can and should play a big role in fostering that difficult but essential dialogue, he said.

“We need religious leaders to step up in synagogues and mosques and temples and churches,” Glaude said. “Because people are grieving, man. Folk are burying people. Our suffering is the bridge, our pain is the bridge to each other’s humanity. And those who are leading places of worship ... have to do that pastoral work in the midst of all the economic trauma and dislocation, all of the racial tension. People are burying folks and then they can’t go to the funerals. They can’t go to wakes, they can’t sit shiva, they can’t say goodbye right. And if people don’t die right and don’t say goodbye right, we’re haunted.”

Born on the coast of Mississippi an hour from New Orleans, Glaude grew up Catholic in the Josephine tradition. Then at age 16, he went to Morehouse College, where “I got drenched in Baptist waters,” he said. “Heard some of the best preaching in the world at Morehouse’s Kings Chapel.”

Asked about one Republican lawmaker’s recent statement that Democrats’ “lenience” toward rioters during last summer’s Black Lives Matter protests encouraged the U.S. Capitol riot, he said, “It’s almost a shame that we would have to even attend to such a claim. It is ludicrous.”

“What we know is this: Five people are dead. Hundreds of police officers are wounded. ... They tried to replace the American flag with the Trump flag. They put up the gallows and claimed that they wanted to lynch Mike Pence. If they had found Pelosi and AOC and Rashida Tlaib or Ilhan Omar, who knows what would have happened?,” he said. “Excuse my language, but we need to understand the (BS) for what it is. Because too much is at stake to entertain it. That’s whether you’re conservative or whether you’re progressive. Too much is at stake to entertain that nonsense."

Glaude’s earlier books include scholarly volumes on religion as well as “Democracy in Black: How Race Still Enslaves the American Soul” and “In a Shade of Blue: Pragmatism and the Politics of Black America.”

Legislation to enlarge two wilderness areas in Virginia’s George Washington National Forest is on its way to the U.S. Senate, thanks to Rep. A…

Just in time for spring, the grounds of The Free Clinic of Culpeper are getting a fresh look and a new purpose.

With spring just days away, Culpeper Renaissance Inc. has devised a way to honor military veterans in a way nobody will miss.

Chamber to host Culpeper Clerk of the Court candidates forum

American writer James Baldwin is seen in 1983 at his home at Saint Paul De Vence on the French Riviera. He spoke to The Associated Press of his life and work and America’s continuing racial problem.