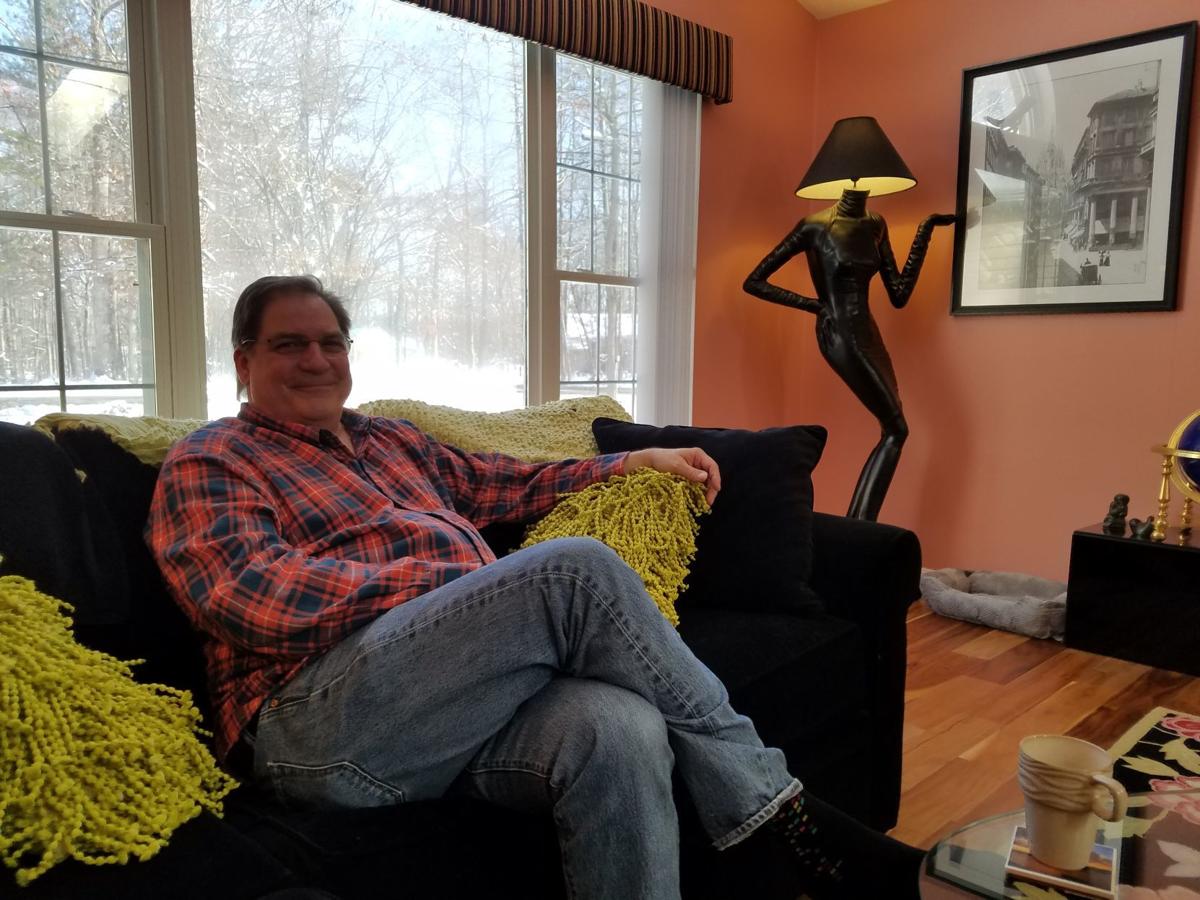 Voice actor Bill Lord relaxes in his home in Lake of the Woods. He and other nationally known audiobook narrators will hold a regional workshop about their profession on Feb. 2. 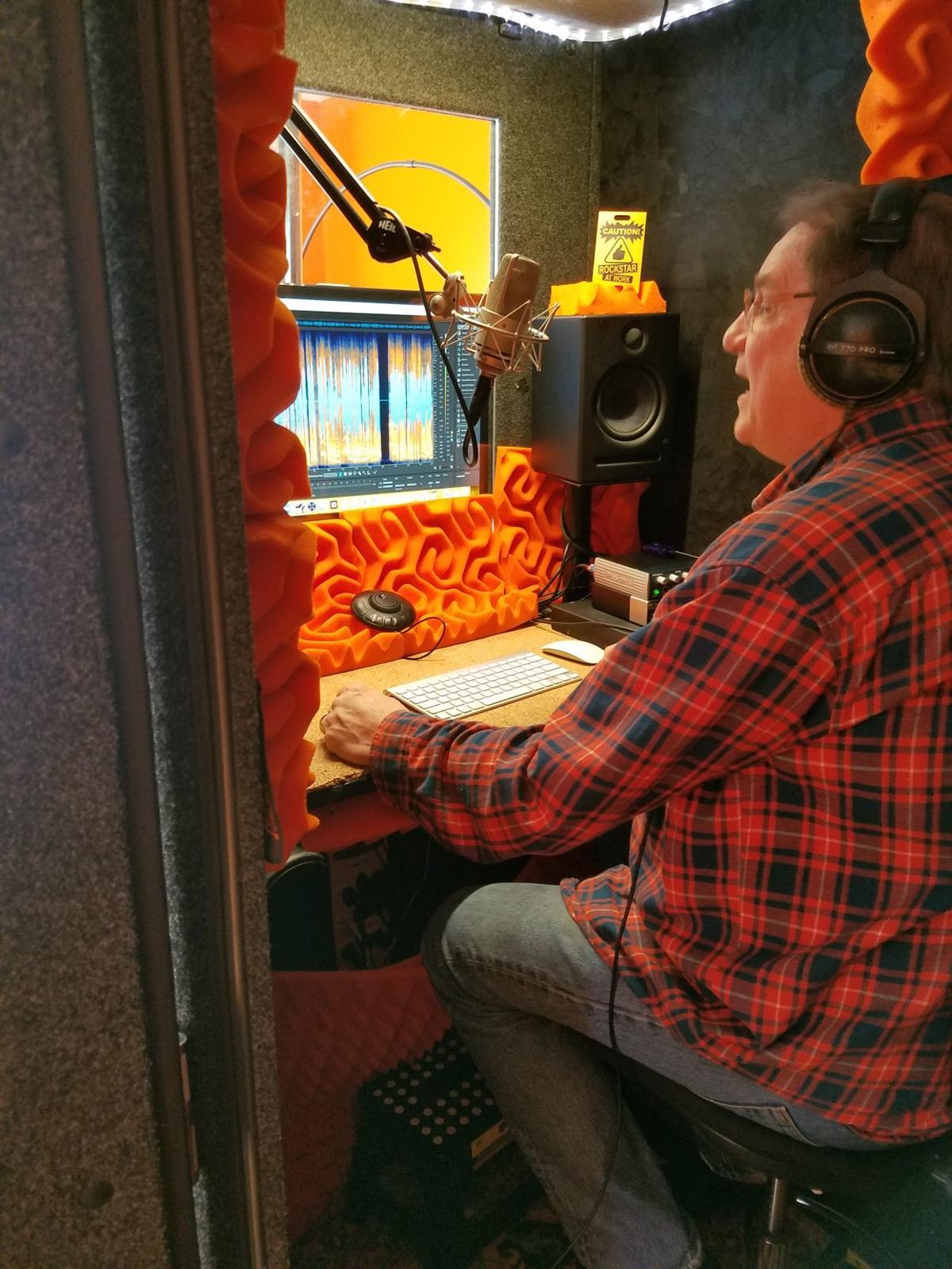 Voice actor Bill Lord reads into the microphone in the sound booth of his home studio in Locust Grove. 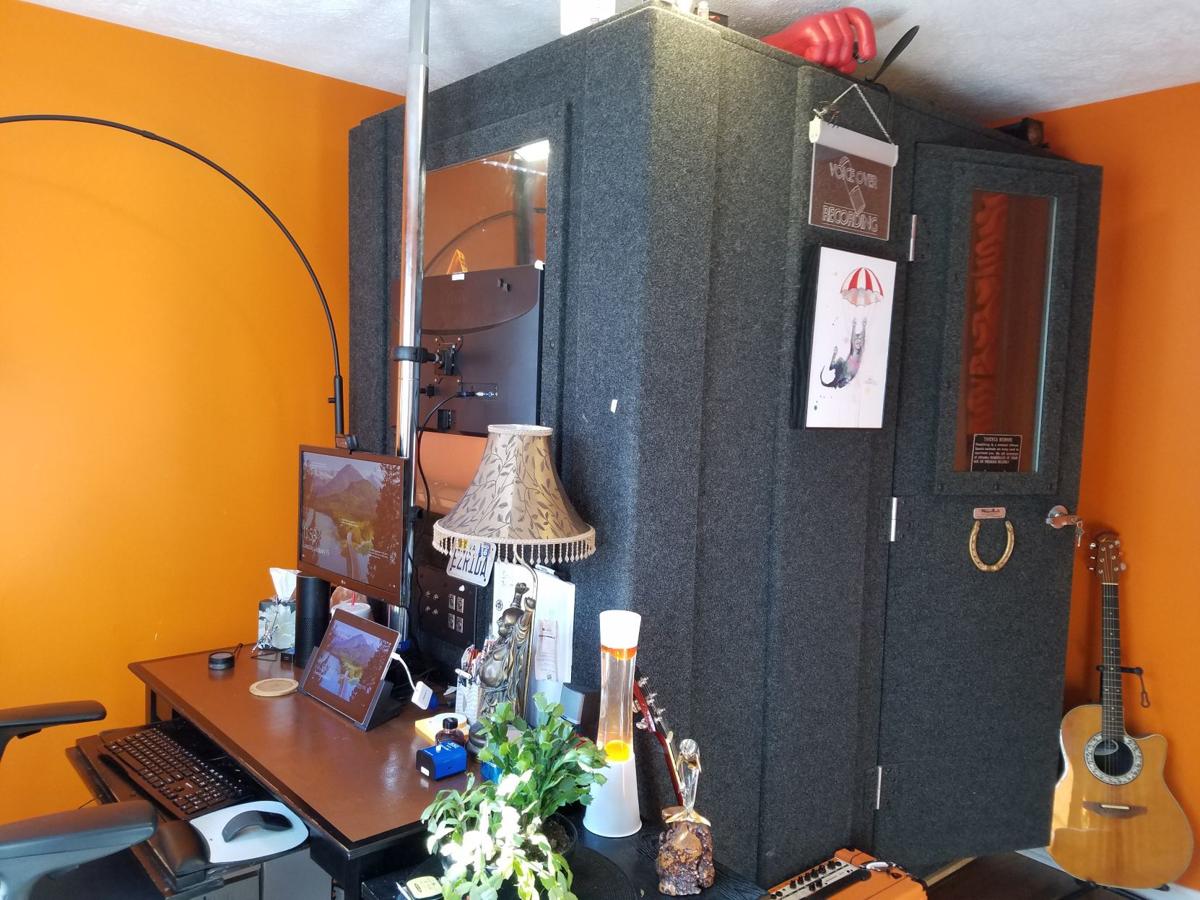 Bill Lord installed a sound booth in his home in Locust Grove. 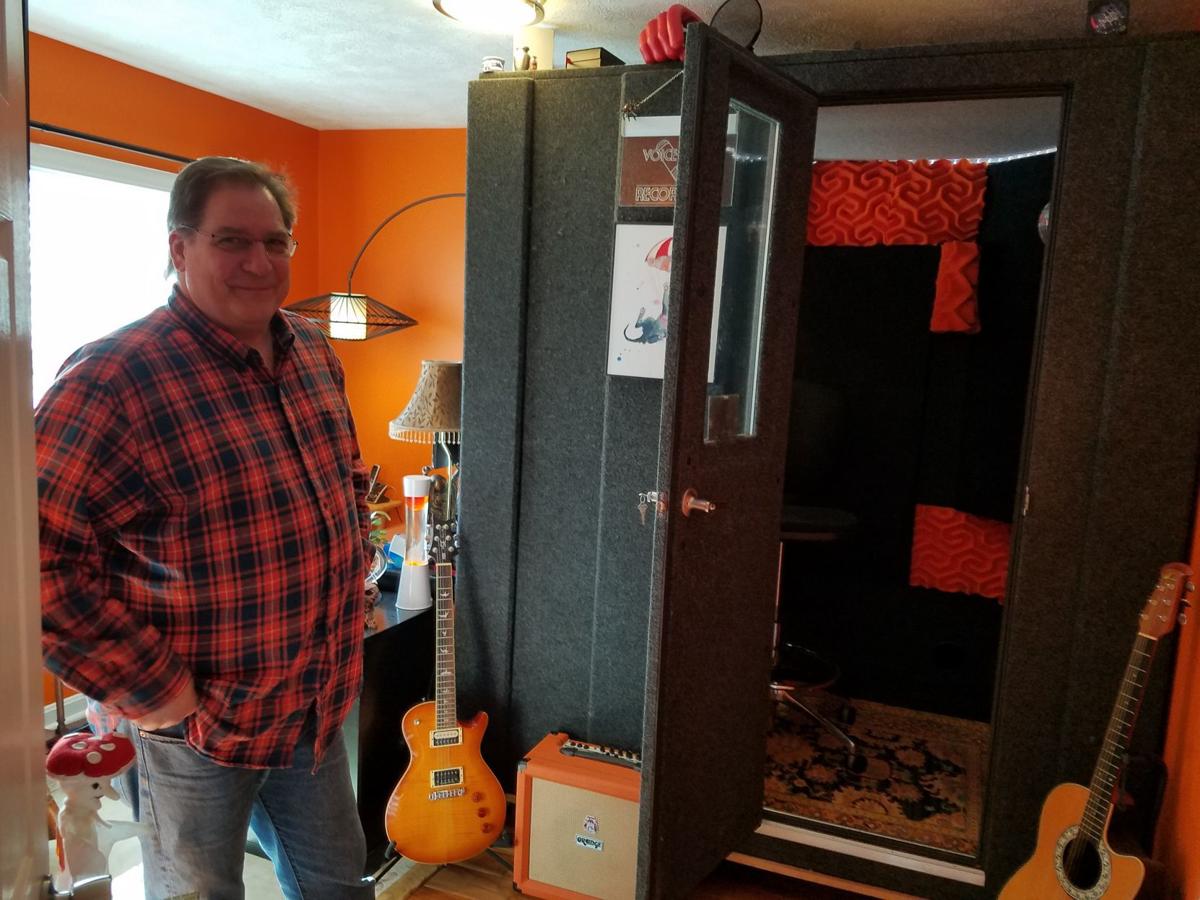 Bill Lord created a sound studio in a room of his home in Lake Of the Woods.

A quick search on Audible.com for Bill Lord brings up a list of titles, ranging from mysteries and science fiction to histories and classics.

Lord has navigated them all, pronouncing every word in a small sound booth, giving each character the breath of life.

Chatting in his Lake of the Woods living room—illuminated by a light fixture with svelte black legs he has christened Joanna—Lord’s tone and the groovy atmosphere put me at ease while we discuss what it means to be a voice actor.

“It really is an acting profession, there’s more to it than simply reading,” he says of the book narration field. “Understanding the intent of the author, character development, keeping characters consistent—there’s a lot that goes into it.”

For those who’d like to try the profession themselves, Lord has organized an audiobook narrator workshop in Locust Grove on Saturday, Feb. 2. Award-winning audiobook narrators Johnny Heller, Carol Monda and Jo Anna Perrin will be sharing their combined experience and know-how during the one-day event, 9:30 a.m. to 5 p.m. at the Lake of the Woods clubhouse.

Chances are, you’ve had the voice of at least one of the presenters in your ear, if listening to audiobooks is something you enjoy. Between the three of them and Lord, they’ve narrated more than 1,000 titles.

“Johnny has become a dear friend, and he wanted to visit,” Lord said. “So we thought, ‘why don’t we do a workshop?’”

Locust Grove is well positioned for such a workshop, located in a lovely country setting near Washington, D.C., Richmond and Charlottesville.

“It’s a neat way for us as friends to spend time together,” Lord added.

According to the Audio Publishers Association, audiobook sales in the United States is the fastest-growing segment in the publishing industry, with a six-year trend of double-digit growth year-over-year.

“26 percent of the U.S. population has listened to an audiobook in the last 12 months,” the APA website states. Audiobook sales in 2017 totaled more than $2.5 billion, up 22.7 percent over 2016, with a corresponding 21.5 percent increase in units.

It follows, then, that audiobook narration is one of the fastest growing markets for actors.

Lord came to the profession after a 17-year career as a disc jockey and production director at a classic-rock radio station in Virginia’s Hampton Roads region, making thousands of voice ads in every imaginable category along the way.

“Living in Detroit in junior high and high school, I grew up listening to Mark Parenteau [a DJ for WABX], and I thought he was just the funniest guy,” Lord said.

Later, after Lord moved to the Boston area, he was surprised to hear Parenteau’s voice on the radio waves again. Lord learned that Parenteau had relocated to Boston as well.

“I couldn’t believe it. I went to the station building and held up a sign to the window that read, ‘Mark, I used to listen to you in Detroit, I’m a great fan,’ and he invited me in,” Lord said.

Parenteau became a friend and mentor for Lord, sharing industry tips and introducing him to many rock greats, such as Aerosmith band members and others.

After his 17-year radio stint, Lord was ready for a change. For about a decade he worked in government contracting, but ultimately he had to admit that—though lucrative—the work left him “sort of deflated. It just wasn’t enough of a creative outlet for me. I needed something more,” he said.

So in 2013, he started looking into voice acting, studying with Heller, Monda and Perrin.

“I fell in love with the medium; it’s really become a passion,” Lord said. “It’s something I’ve come to enjoy deeply.”

The first book he recorded for pay was a collection of science fiction stories, “Sci-Fi Motherlode,” by Robert Jeschonek.

“I really went all in with that one—it’s a 12-hour book. Each story has four or five characters, and there were 18 stories, so I was basically developing 100 different characters,” Lord said.

Lord said about every 90 seconds as he’s reading, he’ll have to stop and go back and record a phrase again.

“I’ll make a mistake or have the wrong inflection—it’s rare to read for longer chunks than that,” he said.

Every one hour of finished audio requires roughly six hours of narration and production work, according to Lord.

“It’s not nearly as simple as many people imagine it to be,” he said. “A lot of work is behind what you hear.”

After starting with sci-fi, Lord ventured into mysteries and thrillers, tried his hand at classics, then branched out into history and a quickly growing area, e-learning. He said he’s considering giving romance a try.

Lord’s book narration has led to other opportunities. A portion of his daily routine includes responding to requests from agents, publishers, or casting sites for audition recordings.

“I’ve done a lot of automotive commercials that air in Texas and Oklahoma,” Lord said. “And I’ve started doing some voice-over jobs, like documentaries.”

Lord said the upcoming Locust Grove workshop is geared to help both those with simply an interest in learning more about the profession as well as already-established voice actors looking to further hone their skills or broaden their horizons.

“That’s the beauty of a workshop like this—no matter where you’re at on the spectrum, you’ll get valuable information,” Lord said. “And better yet, it’ll be a lot of fun.”

Where: Lake of the Woods Clubhouse, 102 Lakeview Parkway, Locust Grove

Info: Lunch will be provided. Please prepare a one- to two-page excerpt from the literary genre in which you’re interested in working. Each attendee will receive individual coaching and instruction, as well as general information about business and marketing aspects of the industry.

Watch Now: How will Biden’s Environmental Protection Agency be different?

Watch Now: How will Biden’s Environmental Protection Agency be different?

Legislation to enlarge two wilderness areas in Virginia’s George Washington National Forest is on its way to the U.S. Senate, thanks to Rep. A…

Just in time for spring, the grounds of The Free Clinic of Culpeper are getting a fresh look and a new purpose.

Chamber to host Culpeper Clerk of the Court candidates forum

Voice actor Bill Lord relaxes in his home in Lake of the Woods. He and other nationally known audiobook narrators will hold a regional workshop about their profession on Feb. 2.

Voice actor Bill Lord reads into the microphone in the sound booth of his home studio in Locust Grove.

Bill Lord installed a sound booth in his home in Locust Grove.

Bill Lord created a sound studio in a room of his home in Lake Of the Woods.