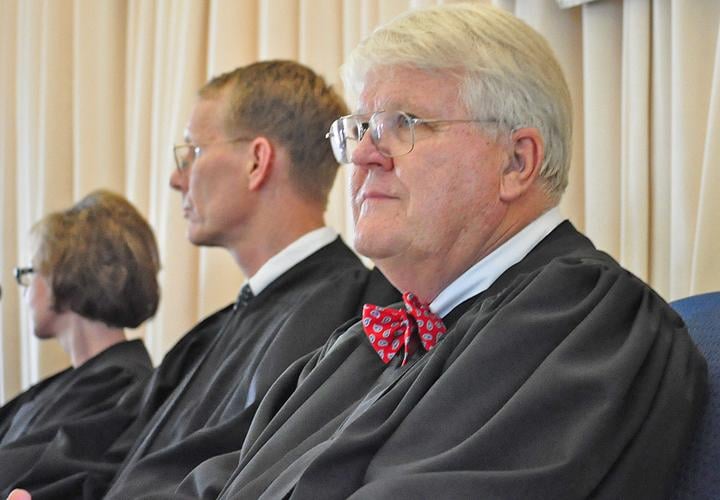 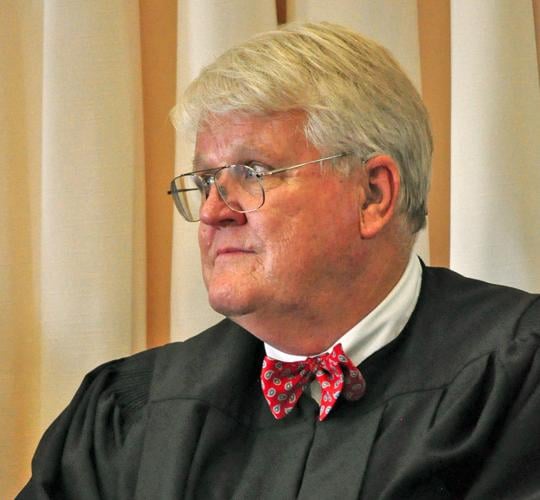 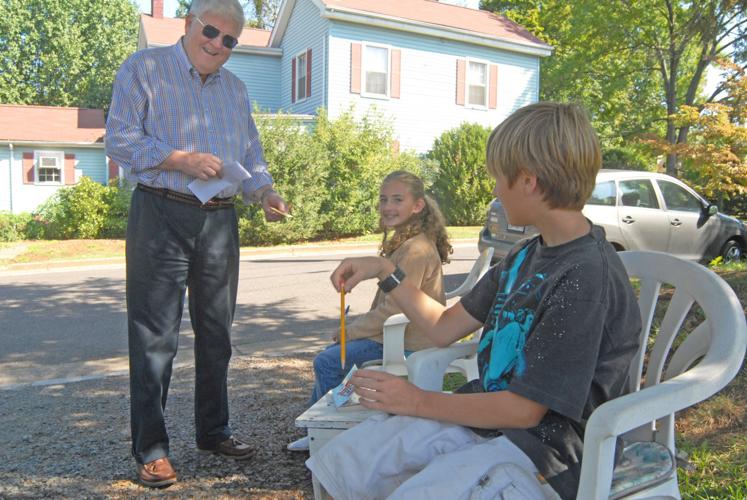 Judge Roger Morton checks in with young volunteers Sydney Berben and Kash Thomas, from left, at a North East Street house during the 2009 East Street Garden and Art Show. 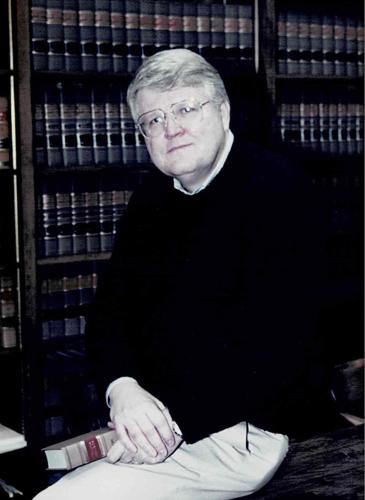 General District Court Judge Roger Morton in the library at his firm, Button, Yeaman and Morton.

Friends and colleagues remember him as an astute member of Virginia’s 16th Judicial Circuit who listened to the people and was level-headed.

Morton’s wife of 55 years, Virginia Beard Morton, was 20 years old and a Longwood College sophomore when she first spotted him from her second-story dorm-room window standing in the rotunda below.

“I remember seeing him, didn’t know him, he was quite tall,” Virginia Morton said by phone Friday. “I was sick and tired of having blind dates who were shorter than me, so a friend of mine, she had a date with him, but had a conflict. ‘Do you want to go in my place?’ I said, ‘Oh yeah, I think he is that tall guy.’”

Morton was a wonderful dancer, his wife said, and it was something they loved to do together and had in common. He was from the small town of Farmville and wanted to practice law in a small town, she said.

“Being from the Richmond area, it was a big change for me,” Virginia Morton said.

But when they saw the view of the mountains driving west on State Route 3, they knew Culpeper was the place for them, she said: “We’ve been here ever since. It’s been wonderful—the support of the people.”

Judge Morton finished law school in two years, attending over the summers during the Vietnam War. He wanted to finish in case he got drafted, Virginia Morton said.

“The greatest blessing of our lives, he had eczema,” she said.

With the stress of trying to finish law school and possibly getting called up for war, the skin condition flared to its worst, Virginia Morton recalled. It got him out of going to war and onto the bar in their new home.

She described how he was always there for her as a husband, including when she wrote a historical novel, “Marching Through Culpeper.”

Roger Morton shipped and handled more than 10,000 copies of the heavy book.

“He always followed through, and he would tell people, I am in charge of shipping and handling,” Virginia Morton said.

During the 15 years Virginia worked as an interior designer, Roger Morton would be there to help hang drapes and shades, though not always with enthusiasm, she said.

“It’s a side of him not many people saw,” Virginia Morton said.

The couple has one daughter, Amy Virginia Morton of Edgewood, N.M.

As a state delegate, Davies nominated Morton for the judgeship—twice. The first time, a Democratic House member said he would not elect a Republican.

“I told him Roger was not a Republican, but really an independent,” Davies said via email. “He opposed his election, and another person was chosen. Two years later, I nominated Roger again and he won. Thanks to Sen. Edd Houck’s work in the Senate and my work in the House, we prevailed. It was a win for our region.”

Morton was an excellent General District Court Judge who used his common sense and worked hard to make sure justice was done, Davies said, adding, “He did things informally.”

He recalled an encounter in the courtroom with Judge Morton.

“He took a recess and asked me to join him in chambers. When I went in, he asked if I was having problems hearing. I told him, yes. He pointed out he did, too, and had gotten hearing aids. He urged me to do so, too. I did.”

On another occasion, Morton called a recess and told the parties to go outside and discuss a solution. They did.

“He looked out for our community and the region. He will be missed,” Davies said.

Morton was appointed General District Court judge for the 16th Judicial District of Virginia in 1999, and served until his retirement in 2012. He heard a variety of traffic and criminal cases in Culpeper, Madison and Fluvanna counties.

“He treated everyone with dignity and respect,” said Durrer, a former local prosecutor and defense attorney. “He made the lawyers who appeared in front of him better. I learned so much trying cases before him.”

Morton committed himself to public service and worked hard to make Culpeper a better place for everyone, Durrer said.

“He keenly knew that the General District Court represented the court that most citizens interacted with,” he said. “He made everyone feel welcome and comfortable in the courtroom. We are all better for it.”

Judge Morton was born in Farmville and moved to Culpeper in 1969 after graduating from Hampden-Sydney College and T.C. Williams School of Law at the University of Richmond, according to his obituary.

Morton settled in Culpeper with his new bride, Virginia, taking a position at Button, Slaughter and Yeaman. The law firm, still located downtown on historic lawyer’s row on West Davis Street across from the courthouse, later became Button, Yeaman and Morton.

During his time in private practice, Morton was Culpeper town attorney for nearly 22 years, appointed on Sept. 1, 1976. Upon leaving that post, he as recognized as a judge on May 12, 1998, according to Culpeper Town Clerk Ashley Clatterbuck.

The Town Council minutes state: “Mayor (Waller) Jones presented a plaque to Roger L. Morton in recognition of his 21.5 years as the Town’s Attorney. Mr. Morton received a standing applause and was wished the very best with his upcoming General District Judgeship.”

Morton also served for a time as an assistant Culpeper County commonwealth’s attorney under John Bennett, according to Vincent Vala’s 2012 Star-Exponent article on the judge’s retirement party.

Culpeper County Commonwealth’s Attorney Paul Walther said Morton was was great to work with as a judge. “Always listened to what people had to say. I never heard him lose his temper in court,” Walther said.

In a social-media post Friday, Del. Rob Bell, an Albemarle defense attorney, said, “In court, (Judge Morton) was always respectful, decent, and helped teach a whole generation of Central Virginia lawyers how to try cases. He will be missed by so many.”

At Morton’s retirement party from the bench a decade ago, the judge thanked everybody who got him there and everyone who kept him there, Vala wrote.

“It’s been great,” Morton said. “But I’m 67 now and my hearing is not so good anymore. I’d rather go out maybe a little bit early than hang around and going out a little bit too late.”

Morton said then that he planned to stay active in the community.

“I’m still going to be active as a volunteer with the county library and helping to keep up the law library here,” he said.

After retirement, the judge did just that, creating a public law library committee to increase access to materials stored in the courthouse. The committee moved the little-known public law library from the courthouse to the public library in Southgate Shopping Center in 2014, according to a Star-Exponent article by reporter Rhonda Simmons. The law library books were integrated into the library’s reference collection, with other law books, and a digital law research station was established.

The move continues to allow the community more access to law books because the library is open evenings and weekends, unlike the courthouse.

“There’s a lot more usage there than we are getting here,” Morton said during a 2013 committee meeting in the courthouse.

Judge Morton was a longtime Rotarian and a member of Culpeper United Methodist Church, where he served on the board of trustees and as a youth counselor.

He was a car enthusiast and chocolate connoisseur who enjoyed sailing, hiking, golfing, dancing to beach music, and infusing humor into all situations, including the courtroom, his obituary says.

In lieu of flowers, donations in memory of Judge Morton may be made to Hospice of the Piedmont, Development Department, 675 Peter Jefferson Parkway, Suite 300, Charlottesville, VA 22911. In keeping with his wishes, a private Celebration of Life will be held.

The controversy regarding parking on Main Street Madison has taken yet another turn. After a decision in July to mark a problematic no parking zone with delineators, the town council has again put the plan on hold.

When artist Stacy Ridgeway moved to Culpeper with his family this year, the father of a kindergartener and a fifth-grader wanted to get all students involved in the creative project on main hallway at A.G. Richardson.

Judge Roger Morton checks in with young volunteers Sydney Berben and Kash Thomas, from left, at a North East Street house during the 2009 East Street Garden and Art Show.

General District Court Judge Roger Morton in the library at his firm, Button, Yeaman and Morton.