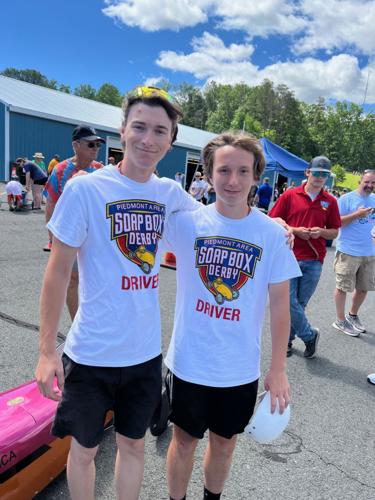 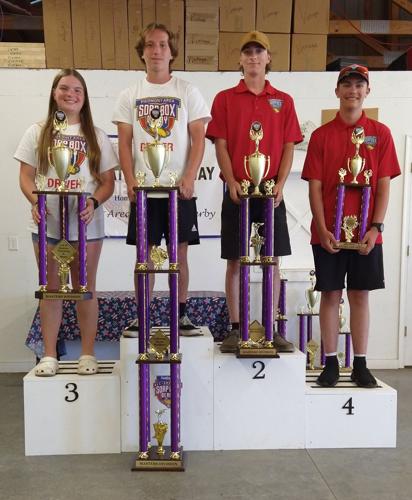 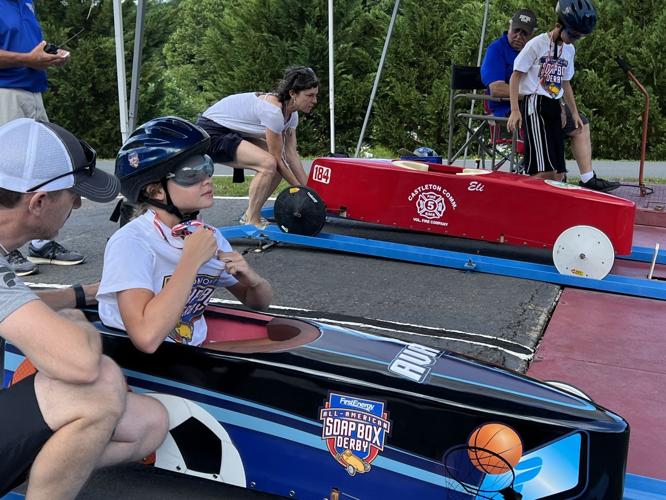 Two riders and their pit crew prep before taking off at last week’s Soap Box Derby. 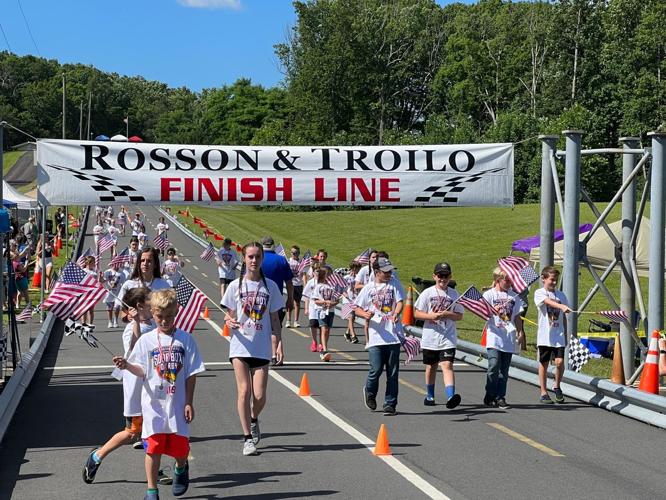 The Drivers Parade is a tradition of the Piedmont Area Soap Box Derby. 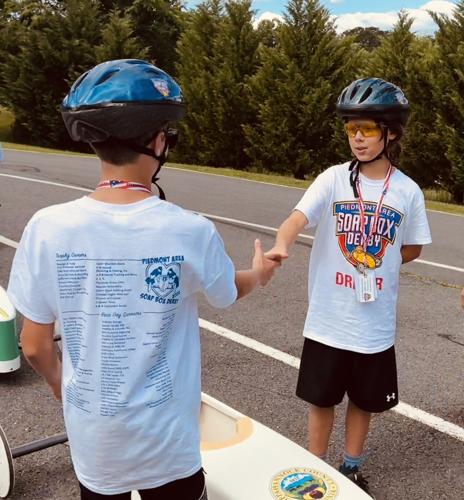 Sportsmanship ruled the day at the 19th running of the Piedmont Area Soap Box Derby Saturday at Paul Bates Raceway. 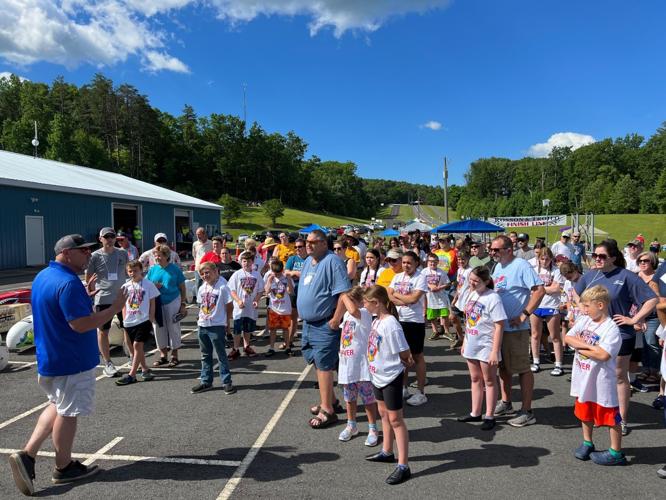 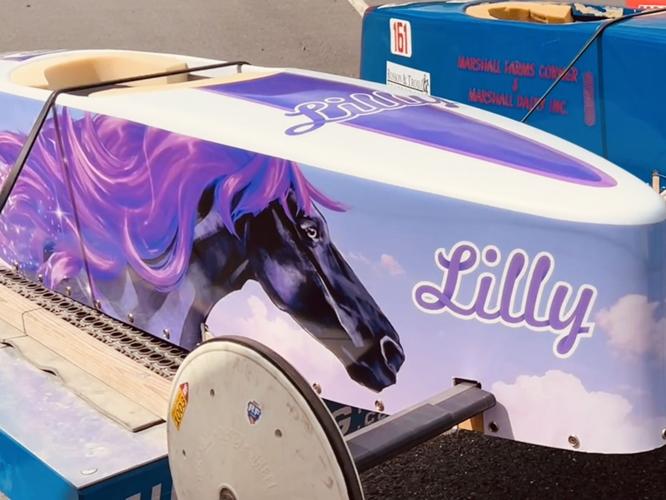 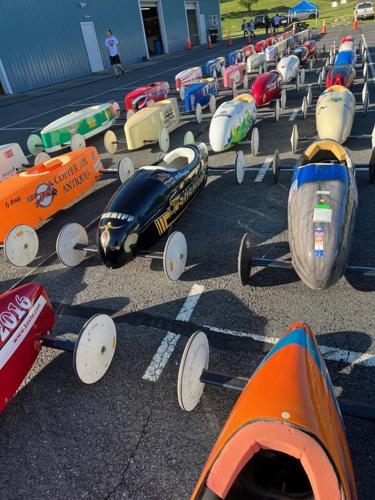 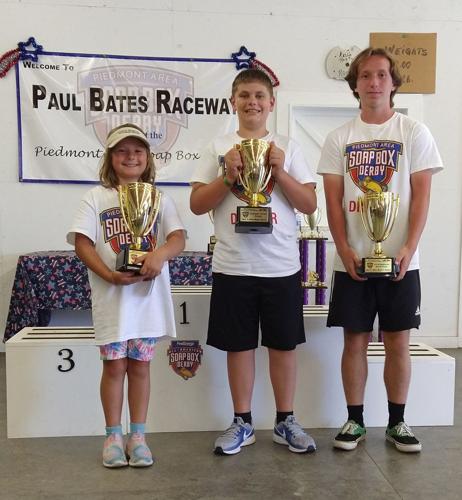 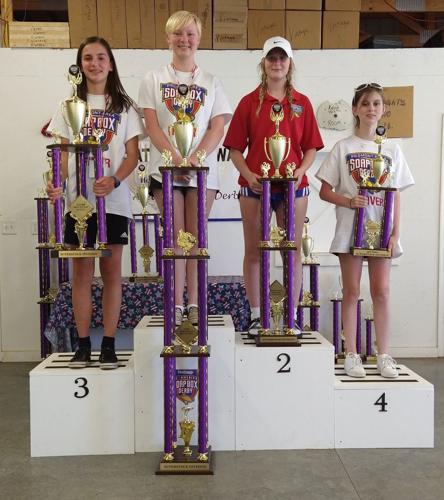 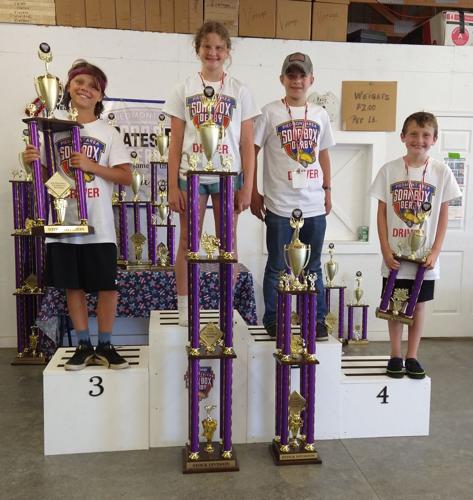 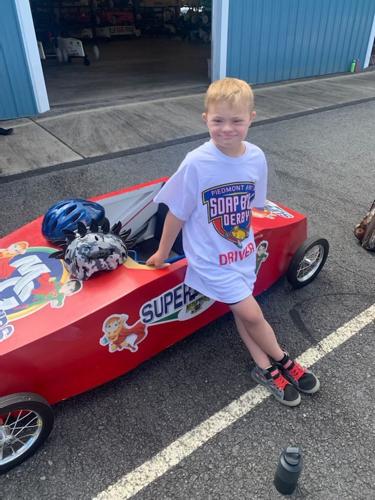 A Super Kids driver waits for his partner to guide him down the hill Saturday at the Piedmont Area Soap Box Derby. 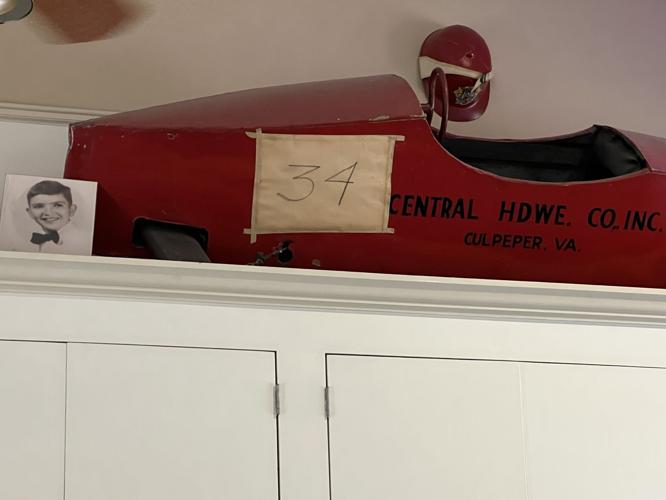 Jesse Yowell’s 1949 first-place ride is on display at the Culpeper Museum. 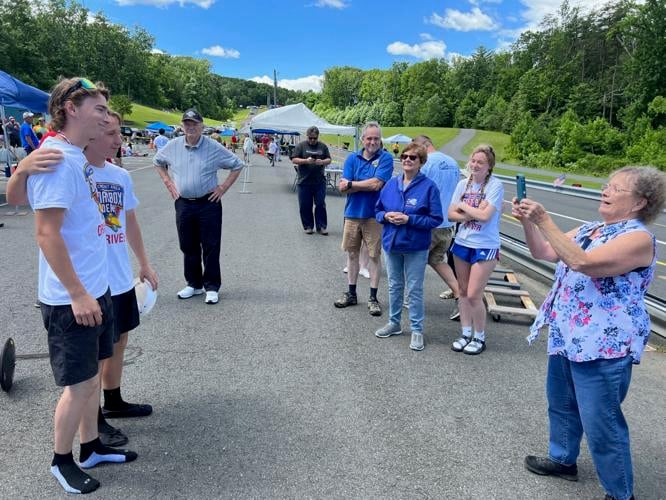 By DAVY MEISTER FOR CULPEPER STAR-EXPONENT

Engaged in one more ... thrill on the hill.

Masters of the track, shoehorning their slender frames into sleek fiberglass tubes that zipped 989 feet downhill on what many believe is the fastest Soap Box Derby track in America. Subtract their car numbers—310 from 330—and you get their number of combined years on the track.

“Durica and Rutherford!” a nearby fan gushed, “These two are fun to watch!”

All eyes were on the duo as they slotted their carts at the top of the hill, waiting for the signal from below to send them.

“You, too, buddy!” Aidan Durica answered back.

It was the finals of the Masters Division, first of three age divisions to compete at the Piedmont Area Soap Box Derby regionals held Saturday at Paul Bates Raceway—and these two veteran racers did not disappoint.

It took double elimination to decide the outcome, and when their wheels crossed the finish line for the last time, Eddie Rutherford, 16, won by a differential of less than a blink of an eye: 0.048 to be exact.

The champ, driving a silver bullet etched with “Fast Eddie” on the side, was short on words after claiming the top spot—but not his proud grandmothers.

Eddie, instead, wanted to turn the focus on his competitor.

“I love that guy,” said Eddie after being surrounded by a sea of family and friends taking tons of cell phone photos. “I’ve known him since I was really, really little. There’s nothing bad to say about him.”

Aidan Durica was understandably emotional after the finals heat.

“It’s awesome that Eddie got to go,” the soon-to-be 19-year-old (born on the 4th of July) Virginia Tech student said, demonstrating sportsmanship, a point-of-emphasis of the local derby. “We raced double-elimination and it was a great race.”

Durica, who, as an eight-year-old, competed at the Paul Bates Raceway when it first opened in 2008, also has another derby love—mentoring Super Kids, youngsters unable to pilot their own car.

“That aspect is wonderful,” said Aidan, who was already planning that special ride later in the afternoon. “The ability to race with the Super Kids is one of my favorite things to do.”

Hundreds of spectators gathered Saturday, many lined up along the immaculate racetrack in shade tents, to cheer on 53 racers, on a spectacularly gorgeous balmy 70-degree day.

Riders were giddy with excitement and nervous energy poured from the race pits where riders tweaked carts before heading to the top of the hill in preparation for a heart-pulsing descent.

All had hopes of advancing to the next level with a chance of adding their names to the impressive list of five local world champions crowned since 2008.

(Riders can punch their tickets to nationals in Akron, Ohio, one of two ways: Win your local derby, or accumulate the necessary rally points at various open competitions.)

It was all downhill from here.

Rounding out the Masters Division winners on Saturday were Kayla Crawford, third place, and Johnathan Johnson in fourth.

One thing that has remained consistent is the imagination on display as young, creative minds continue to mold magic on wheels.

Culpeper has a rich soap box derby history since its first champion was crowned in 1949—when Harry S. Truman was President and gas was 27 cents a gallon.

The 12-year-old boy zipped down Blue Ridge Avenue in his bright red custom box, (you can see it at the Culpeper Museum!) before coming to a stop, steps away from what would later become Culpeper’s first community park.

And, the derby rolls on.

Davy Meister, a retired schoolteacher and coach with a background in print journalism, is a freelance writer who lives in Culpeper. Reach him at meisterdavy@yahoo.com.

When artist Stacy Ridgeway moved to Culpeper with his family this year, the father of a kindergartener and a fifth-grader wanted to get all students involved in the creative project on main hallway at A.G. Richardson.

7 charts that show where home sales are headed in Virginia

Are prices headed up or down? Where are the hotspots for buyers and sellers? Find out with these charts and graphs, updated weekly.

Two riders and their pit crew prep before taking off at last week’s Soap Box Derby.

The Drivers Parade is a tradition of the Piedmont Area Soap Box Derby.

Sportsmanship ruled the day at the 19th running of the Piedmont Area Soap Box Derby Saturday at Paul Bates Raceway.

A Super Kids driver waits for his partner to guide him down the hill Saturday at the Piedmont Area Soap Box Derby.

Jesse Yowell’s 1949 first-place ride is on display at the Culpeper Museum.