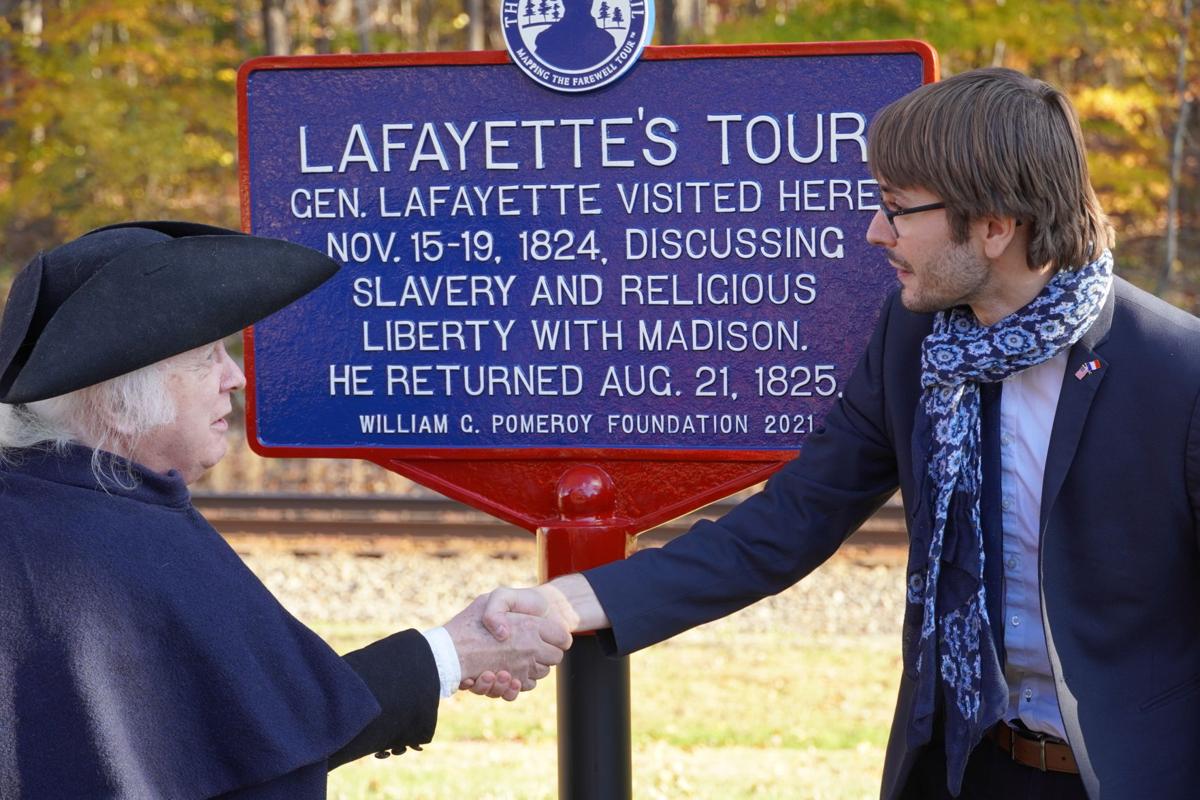 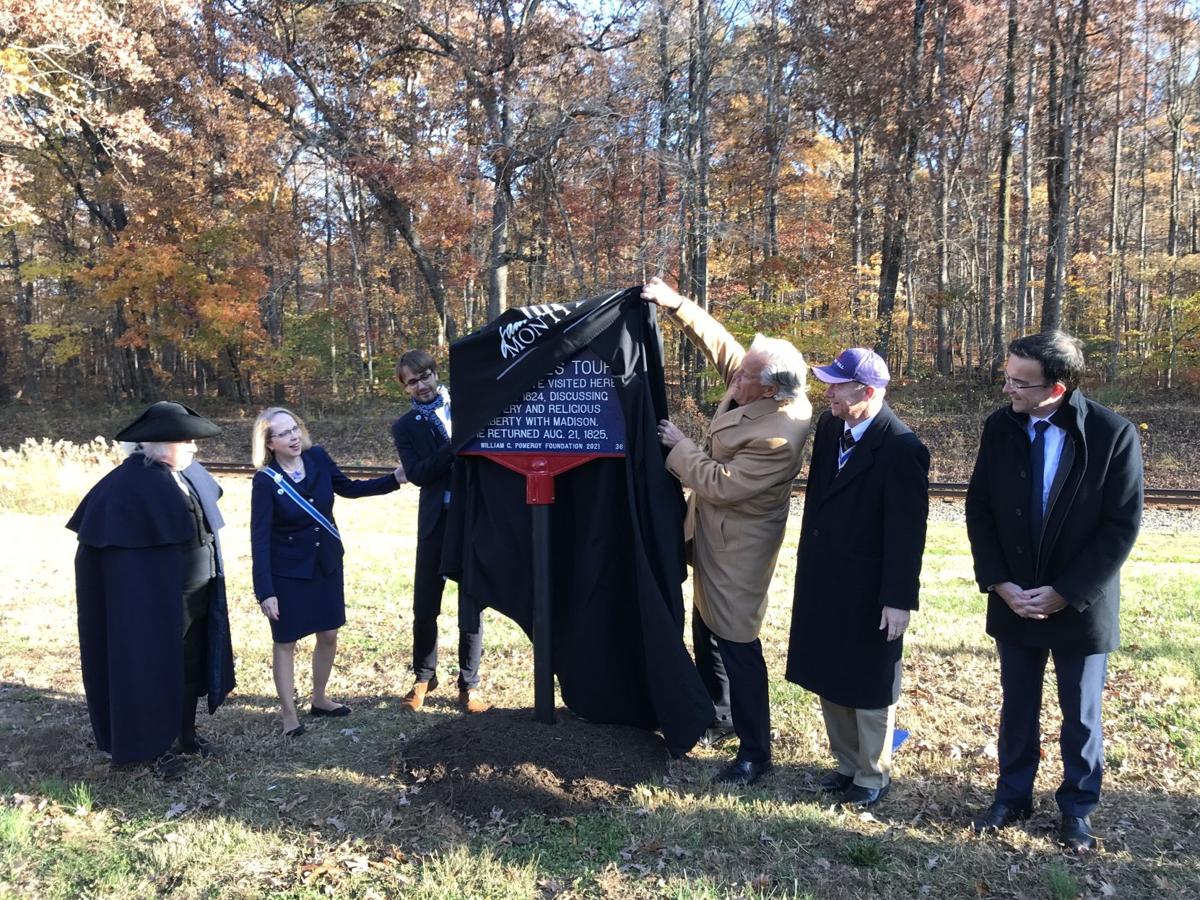 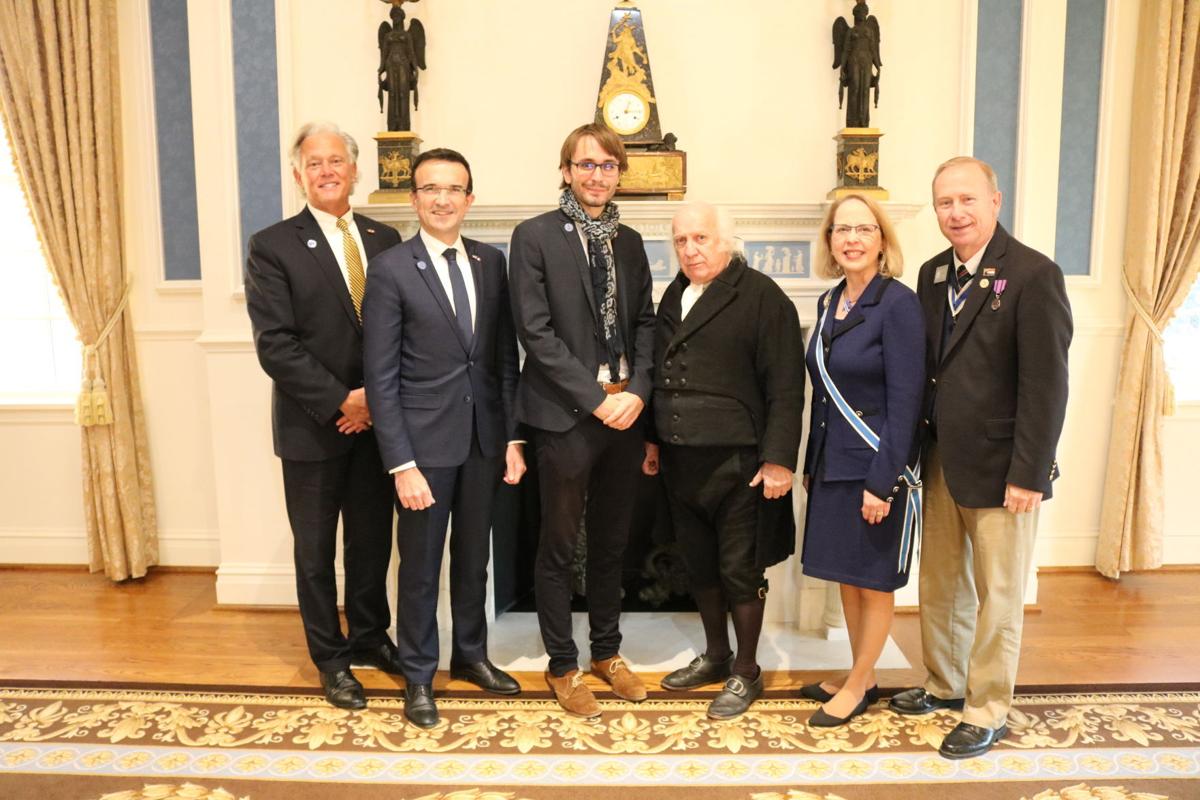 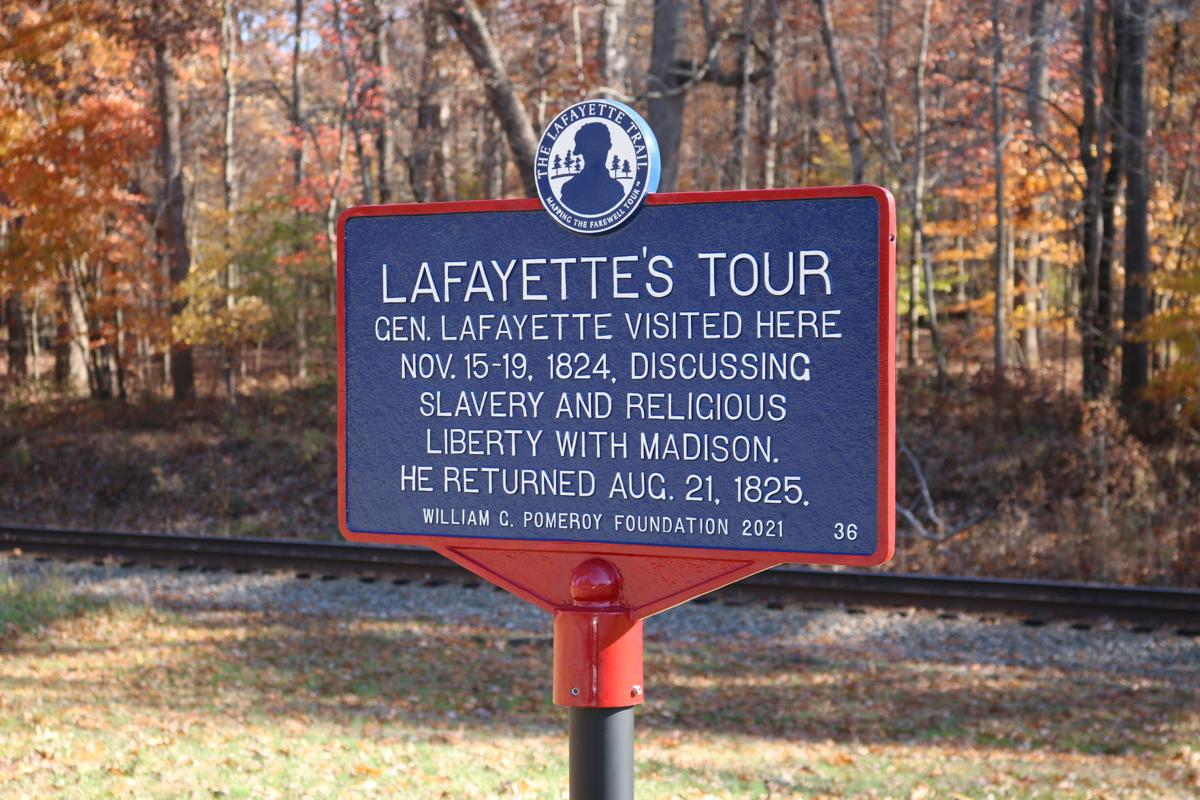 The Lafayette Trail marker’s unveiling draws a large crowd to the historic Montpelier Station railroad depot on State Route 20, near the entrance to James Madison’s Montpelier, in Orange County, Va. 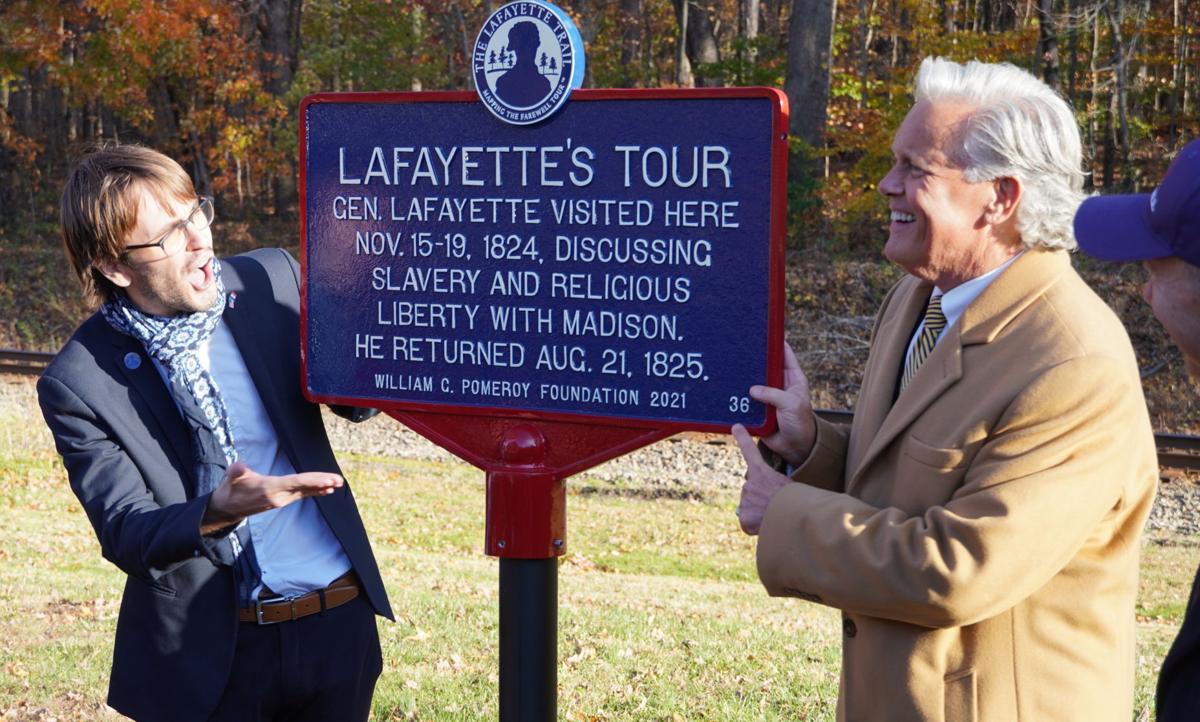 Julien Icher, the young Frenchman who isPresident and founder of the Lafayette Trail, shares a light moment with Montpelier Foundation Presidents and CEO Roy Young.

When the Marquis de Lafayette visited the United States nearly 200 years ago, long after his valor in the American Revolution, it was a very big deal. Enthusiastic crowds greeted the Frenchman, the last surviving major general of the Continental Army, wherever he went.

On Pennsylvania’s Brandywine battlefield, thousands came to see him and citizens erected a tall stone column to him and his contributions to the American cause.

In Fredericksburg, residents drove carriages miles west on the Plank Road to meet the marquis and welcome him, then hosted a ball for their distinguished guest in town.

So it was with plenty of precedent that dignitaries gathered Nov. 15 at James Madison’s Montpelier to honor this combat veteran and French aristocrat with a public marker to his memory. Specifically, the memory of his Nov. 15-19, 1824, visit with Madison, the nation’s fourth president, at his plantation in Orange County. They discussed two hot-button topics important to both men: slavery and religious liberty.

The marker at the presidential home joins dozens of others along The Lafayette Trail, a recently-born nationwide network of historic sites dedicated to the general’s Farewell Tour, when Lafayette visited all 24 states.

At the invitation of President James Monroe and Congress , Lafayette came as America prepared to celebrate the 50-year anniversary of the Declaration of Independence. His visit had “a huge effect” on popular opinion in the young republic, said Julien Icher, president and founder of The Lafayette Trail project, an independent, tax-deductible nonprofit.

Lafayette—who felt strongly that America’s republican principles were far superior to what had been tried in Europe for centuries—renewed citizens’ sense of confidence in the United States, he said.

In 1825, Lafayette visited the town of Culpeper and stayed at Greenwood on the 1,500-acre plantation of William Clayton Williams. John Williams Green, a justice of the Virginia Supreme Court of Appeals, received Lafayette and former President James Monroe at his home. The Federal-style house still stands today on Orange Road. The marquis also visited Culpeper’s Masonic Hall at its original site on Main Street; the building was destroyed by 2011’s Louisa earthquake. Its site is now a pocket park across from the Culpeper Voter Registrar’s Office.

On slavery, the marquis and Madison basically agreed to disagree, though they felt similarly about the immorality of human bondage, Icher said.

The marquis was an abolitionist with a deep commitment to universal human rights, so he challenged Madison to live up to the ideals of his nation’s founding generation, he said.

Informed by The Enlightenment, the Frenchman could afford to make recommendations to Madison about domestic politics, Icher said.

Madison’s more practical desire was to preserve the states’ union at all costs, even by compromising on slavery—”a very traditional view, as a founding father,” he said.

“Even before today’s events, nearly every visitor who has taken a tour of Montpelier has heard the story of Lafayette’s visits,” Montpelier Foundation President and CEO Roy Young said during the Lafayette Trail marker’s dedication. “We can imagine that when Lafayette introduced the topic of slavery to Madison’s friends, that was a difficult conversation, just as our conversations about ‘whole-truth history’ with visitors today can be difficult.

“We believe, however, that these are important conversations to have, and our connection with The Lafayette Trail will create even more opportunities to engage in thoughtful dialogue with our visitors as a presidential site, a site of former enslavement, and the birthplace of the U.S. Constitution,” Young said.

“We know this Lafayette Trail marker will stand at James Madison’s Montpelier as a testament of Lafayette’s legacy in the United States for today and generations to come,” said Deryn Pomeroy, trustee of the William G. Pomeroy Foundation.

Gilbert du Motier, the Marquis de Lafayette, fought heroically in the Revolutionary War and commanded American troops in several battles, including the siege of Yorktown. During the long conflict, he and George Washington, on whose staff he served, became lifelong friends.

After returning to France, Motier became a key figure in the French Revolution of 1789 and the July Revolution of 1830. In his later visits to America, he was a stabilizing force at a time of great political divide in the United States, Icher said.

The Lafayette Trail Inc.’s mission is to document, map and mark Lafayette’s footsteps during his Farewell Tour of the United States in 1824 and 1825.

The nonprofit aims to educate the public about the national significance of Lafayette’s tour, promote a broader understanding of his contributions to American independence and national coherence, and prepare for the 2024-2025 bicentennial celebrations of his tour.

To learn more, visit thelafayettetrail.org. The trail project is active on Twitter and Facebook, and produces a YouTube series on its work and travels. See https://twitter.com/LafayetteTrail or @julien_icher and #FollowtheFrenchmen.

James Madison, for whom Orange County was his lifelong home, is famed as father of the U.S. Constitution and architect of the Bill of Rights. It’s less well known that he birthed Virginia’s Statute for Religious Freedom, which became a foundation of the First Amendment and ensured separation of church and state—a sharp break with European ways.

Montpelier, dedicated to Madison’s brainchild—government by the people—calls itself “more than a museum.” Want to know more? Visit www.montpelier.org.

The William G. Pomeroy Foundation supports the celebration and preservation of community history; and raising awareness, supporting research and improving the quality of care for patients and their families facing a blood-cancer diagnosis. For more, visit wgpfoundation.org.

The Lafayette Trail marker’s unveiling draws a large crowd to the historic Montpelier Station railroad depot on State Route 20, near the entrance to James Madison’s Montpelier, in Orange County, Va.

Julien Icher, the young Frenchman who isPresident and founder of the Lafayette Trail, shares a light moment with Montpelier Foundation Presidents and CEO Roy Young.