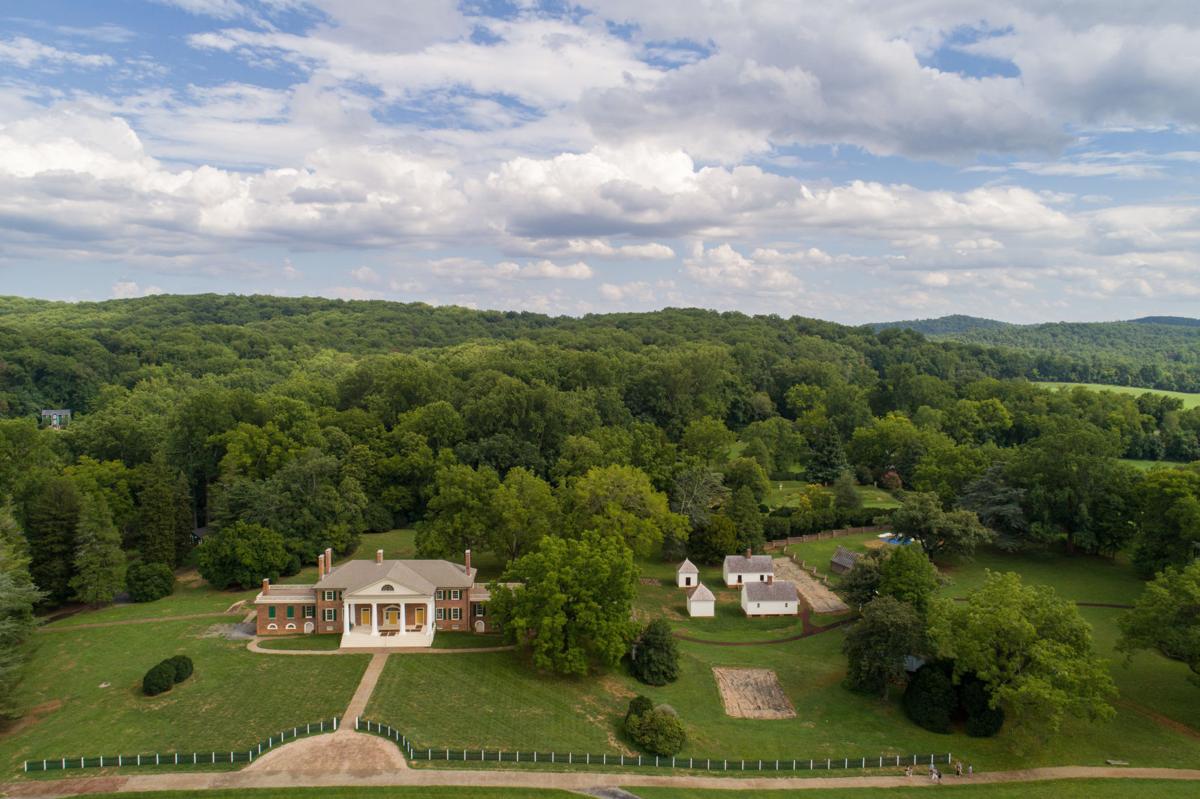 A birds-eye view of Montpelier, James and Dolley Madison’s home, and the adjacent South Yard structures (right) where some of their enslaved people lived and worked. 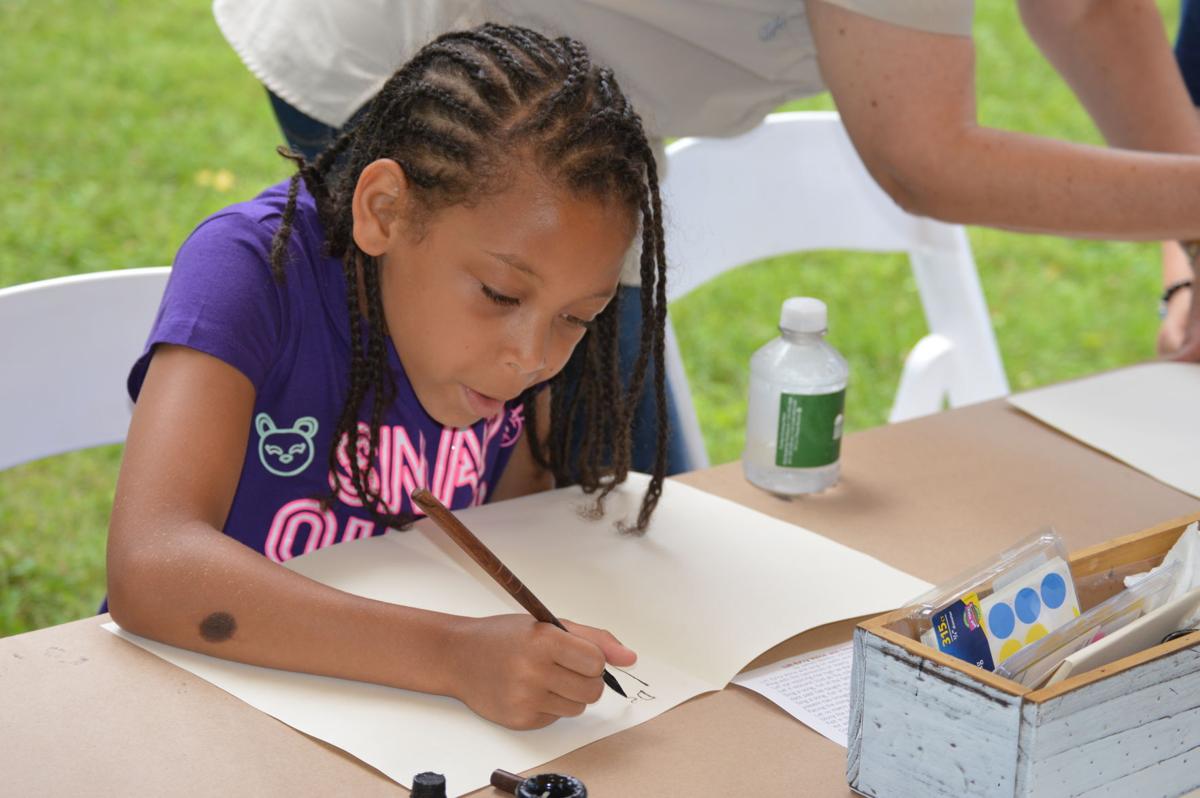 A visitor writing with a quill pen during the Juneteenth celebration at James Madison’s Montpelier in 2019. 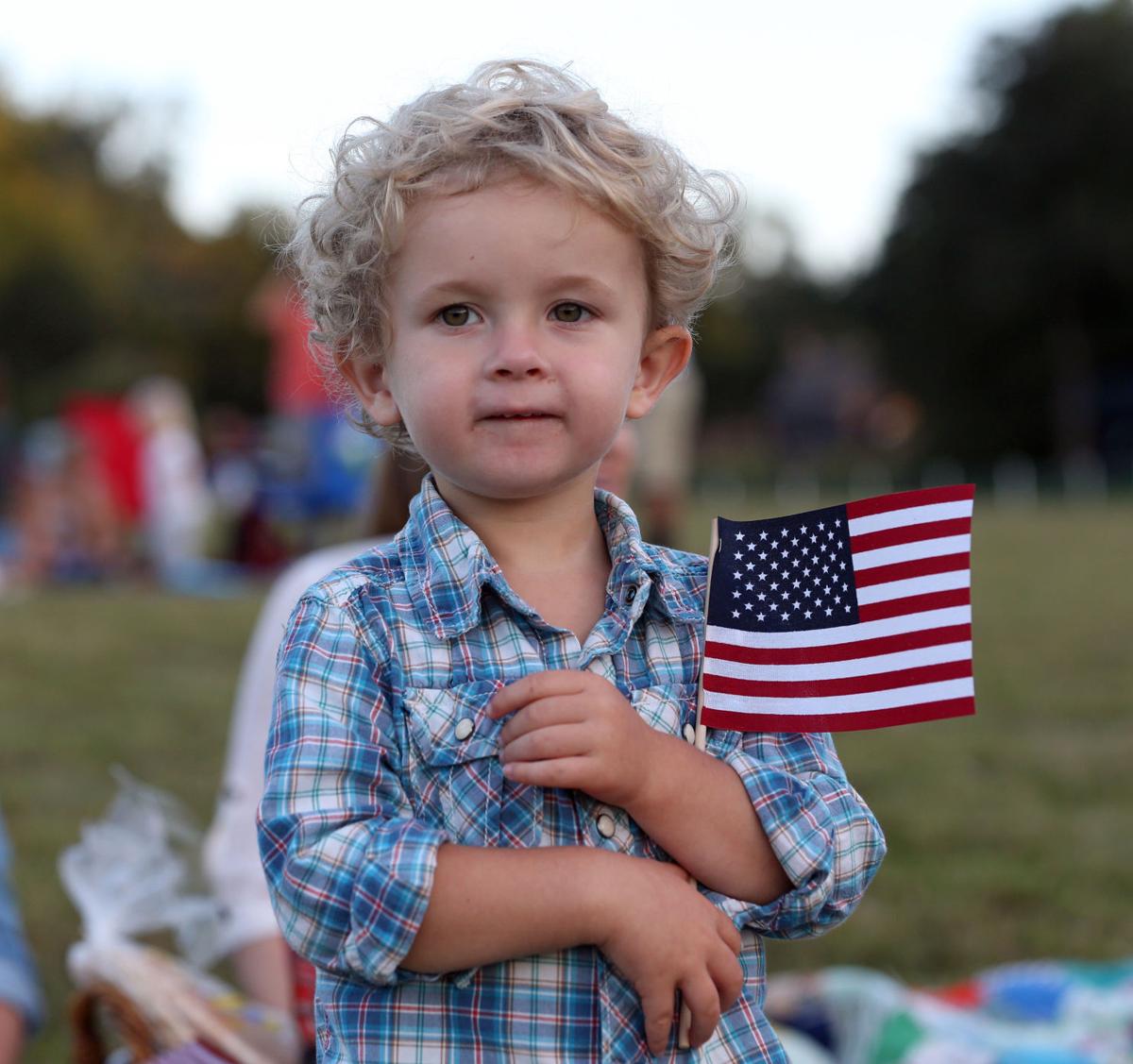 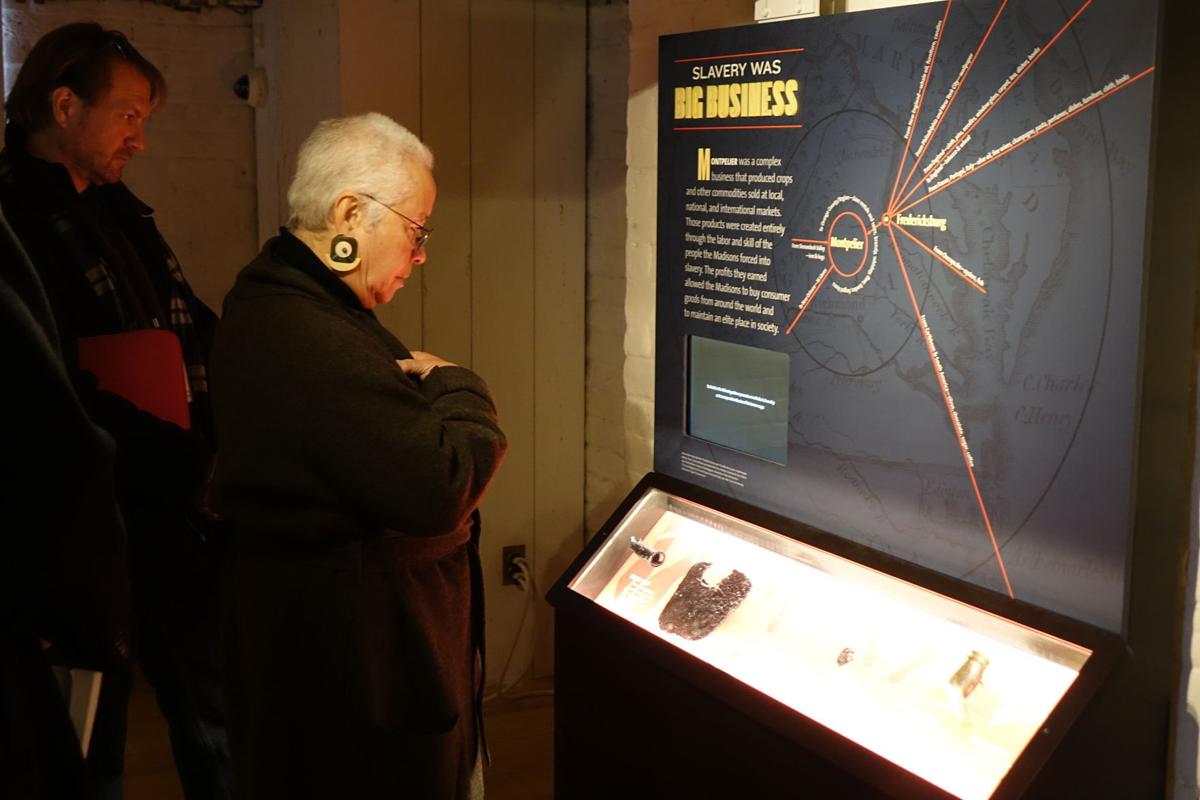 Visitors eye a panel in ‘The Mere Distinction of Colour’ exhibit at Montpelier. 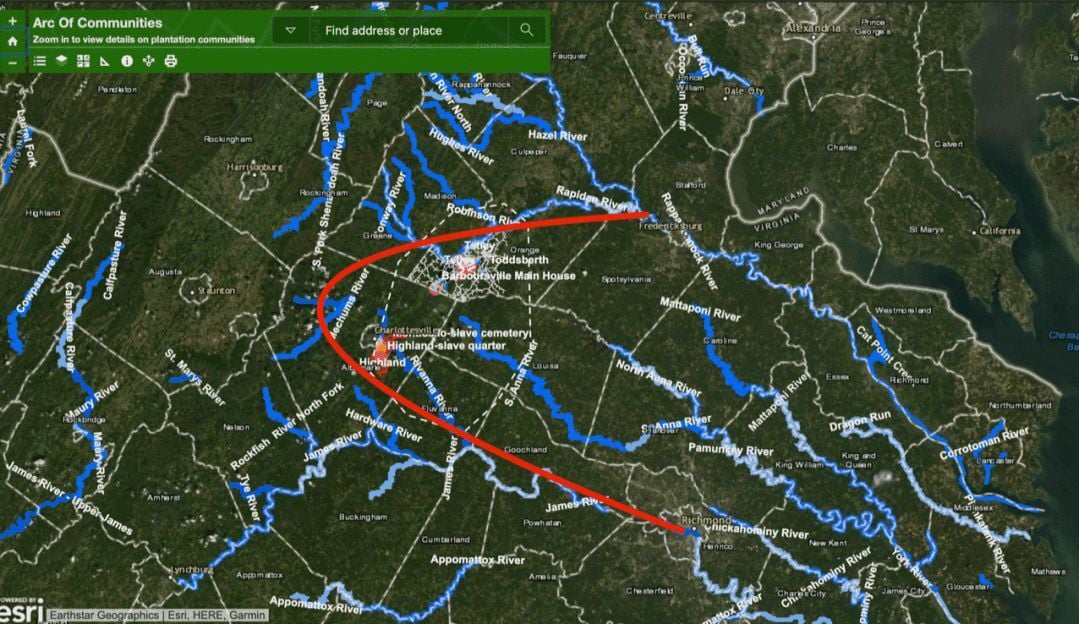 The Arc of Enslaved Communities project reaches from Fredericksburg to Montpelier and Monticello to Richmond. It will strive to share the stories of the region’s African American people.

A proposal to research, interpret and promote historic sites of enslaved Virginians and free people of color in America’s founding era just got a boost—a grant from the National Trust for Historic Preservation.

The trust’s $75,000 grant will help the Montpelier Descendants Committee, kinfolk of people connected with James Madison’s Montpelier in Orange County, devise how to create a national trail to link together such sites.

The award is among more than $3 million in grants the trust announced for 40 sites and organizations through its African American Cultural Heritage Action Fund.

“It’s an honor to be recognized amongst such iconic historic sites!” the Descendants Committee, @JMMdescendants, tweeted about the grant award. “... Excited to start! @savingplaces”

“The idea is to redraw the map of heritage tourism in the Mid-Atlantic. It’s a statewide project,” James French, the Descendants Committee’s chair, said in an interview Tuesday afternoon.

“There is all this focus here on James Madison and Thomas Jefferson as if, through sheer genius, they were able to succeed in all they did,” French said. “But their work was also the invention of the people they held in bondage. The founders were enabled by them—in Madison’s case, from the wealth stolen from enslaved people.”

Three generations of Madisons held more than 300 men, women and children in bondage for over 120 years.

The committee aims to create a portion of the trail by 2026, when the nation celebrates the 250th anniversary of American independence, French said.

"Enslaved people were not marginal to our nation's fight for independence or the conception of our country's founding documents," he said. "We want to ensure that this celebration includes a focus on their contributions."

The first of its kind in the nation, the trail would connect sites extending from Fredericksburg to Montpelier, west to Monticello and the Southwest Mountains, and south to Richmond—perhaps hundreds of miles in all, the Orange County resident said.

The Descendants Committee calls it “The Arc of Enslaved Communities.”

The concept emerged from a meeting of the committee and historical experts in late 2019, said French, whose Twitter handle is @JalbertFrench.

The Arc follows the most prominent features of the founding era’s landscape—the mountains and rivers, with the Rivanna and James leading to Richmond and the Rapidan and Rappahannock leading to Fredericksburg, both vital port cities that linked Virginia to the broader Atlantic world.

Along the trail, visitors could hike and camp and discover this essential aspect of the founding era, experiencing the archaeological research and trail-blazing interpretive science taking place at its historic sites, French said.

A multi-year and multimillion-dollar undertaking, the project would involve the state, Virginia Tourism Corporation, the University of Virginia, James Madison University and students from historically black colleges and universities, he said.

The trail would try to answer how and why this region became so important to the nation’s founding. It depended on a deeply intertwined ecosystem of black and white people, enslaved and free, and the economy they created together, French said.

“It’s no coincidence that slavery was critical to James Madison and Thomas Jefferson, two eminent men who decided they would provide the blueprints for the nation,” he said. “Those two things are almost cause and effect.”

During the founding era, this area—from Fredericksburg west to the mountains and Monticello and arcing southeast to Richmond—was the most densely populated place for enslaved people, French said..

The Descendants Committee wants to take the archaeological methods developed at Montpelier and use them to discover the settlements in this region where so many enslaved people and later free African Americans lived.

“Many of these communities are just ruins now, traces beneath the soil,” he said. “But they can be detected using LIDAR scanning from an airplane, just as they did at Montpelier.”

The committee’s application was selected from among 519 applications, French said.

A planning grant, the award will enable the committee to map the objectives, needs, resources and metrics required to create the national trail to be administered by the National Park Service, he said.

“The whole idea is not to lock it away and say it’s done, but for it to be a living trail that leads to ongoing research and deepens the story of the founding,” French said.

The Montpelier Foundation, which operates James Madison’s Montpelier, looks forward to collaborating with the Descendants Committee on the project, a spokeswoman said.

The foundation started returning Black history to Montpelier’s landscape in 2004 by restoring the Gilmore Cabin, and then the South Yard, home and work area of some of the Madisons’ enslaved people, in 2011.

In 2017, the foundation opened its award-winning exhibition “The Mere Distinction of Colour,” which shares narratives of Montpelier’s enslaved people as told by their descendants.

Among the landmarks that received grants from the National Trust this year are Virginia’s Fort Monroe, where enslaved Africans first landed in English-occupied North America; the Prince Hall Masonic Lodge in Atlanta, where Martin Luther King Jr. had an office; and the home of Marian Anderson, the contralto who sang at the Lincoln Memorial in Washington, D.C., after the Daughters of the American Revolution refused their stage at segregated Constitution Hall.

Money for the grants comes from the African American Cultural Heritage Action Fund, a part of the National Trust that was created in 2017 in response to the conflict over the statue of Robert E. Lee in Charlottesville, Va. It is the largest fund in American history to save African American landmarks, the trust said.

“The recipients of this funding exemplify centuries of African American resilience, activism and achievement,” Brent Leggs, the Action Fund’s executive director, said in a statement. “Together, they help document the true, complex history of our nation.”

With $50 million, the Action Fund is the largest preservation effort undertaken to support the longevity of African American historic sites, the trust said. Last week’s grant announcement was the largest single disbursement in the fund’s four-year history.

Lonnie Bunch, secretary of the Smithsonian Institution, said the fund is “creating a lasting historical record, which demonstrates that African American narratives are integral to our nation and our shared future.”

Recently, the fund has received a large influx of donations, mainly due to a $20 million gift from philanthropists MacKenzie Scott and Dan Jewett. Their gift “acknowledges the power of preservation as a form of equity and asserts the importance of African American history as a vital force in the American cultural landscape,” the trust said.

In the first three years since its inception in 2017, the fund raised nearly $30 million, primarily due to support from The Andrew W. Mellon Foundation, the Ford Foundation, and The JPB Foundation.

Learn more about the Montpelier Descendants Committee at montpelierdescendants.org.

Trees downed by storm displace family, cause damage while many lose power

Marcia Ward, looking at an enormous branch sitting on a nearby car, expressed gratitude Wednesday after a severe thunderstorm blasted through …

Louisa County Agricultural Fair is coming to Walton Park July 29-21 and will include an array of features that range from craft works, baked goods and livestock presentations to a bevy of contests.

A birds-eye view of Montpelier, James and Dolley Madison’s home, and the adjacent South Yard structures (right) where some of their enslaved people lived and worked.

A visitor writing with a quill pen during the Juneteenth celebration at James Madison’s Montpelier in 2019.

Visitors eye a panel in ‘The Mere Distinction of Colour’ exhibit at Montpelier.

The Arc of Enslaved Communities project reaches from Fredericksburg to Montpelier and Monticello to Richmond. It will strive to share the stories of the region’s African American people.