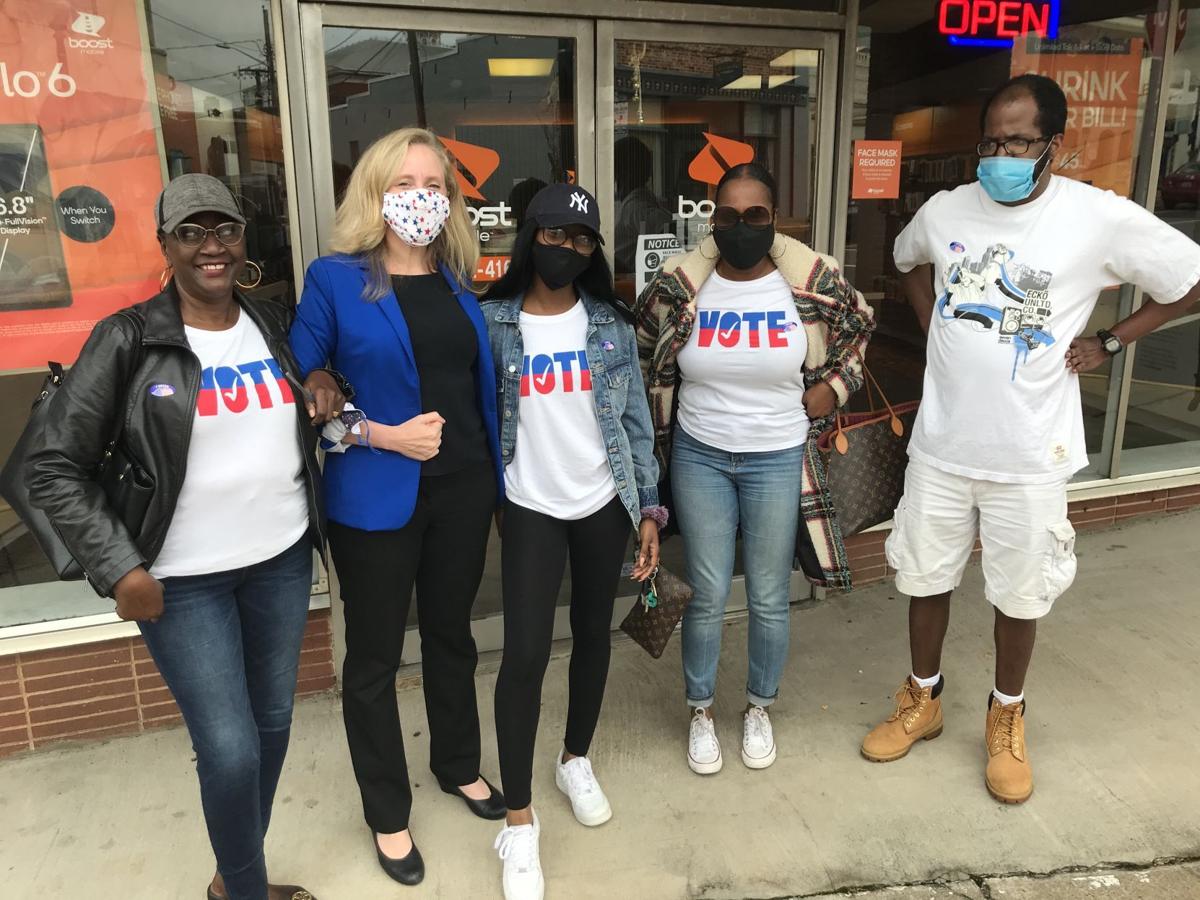 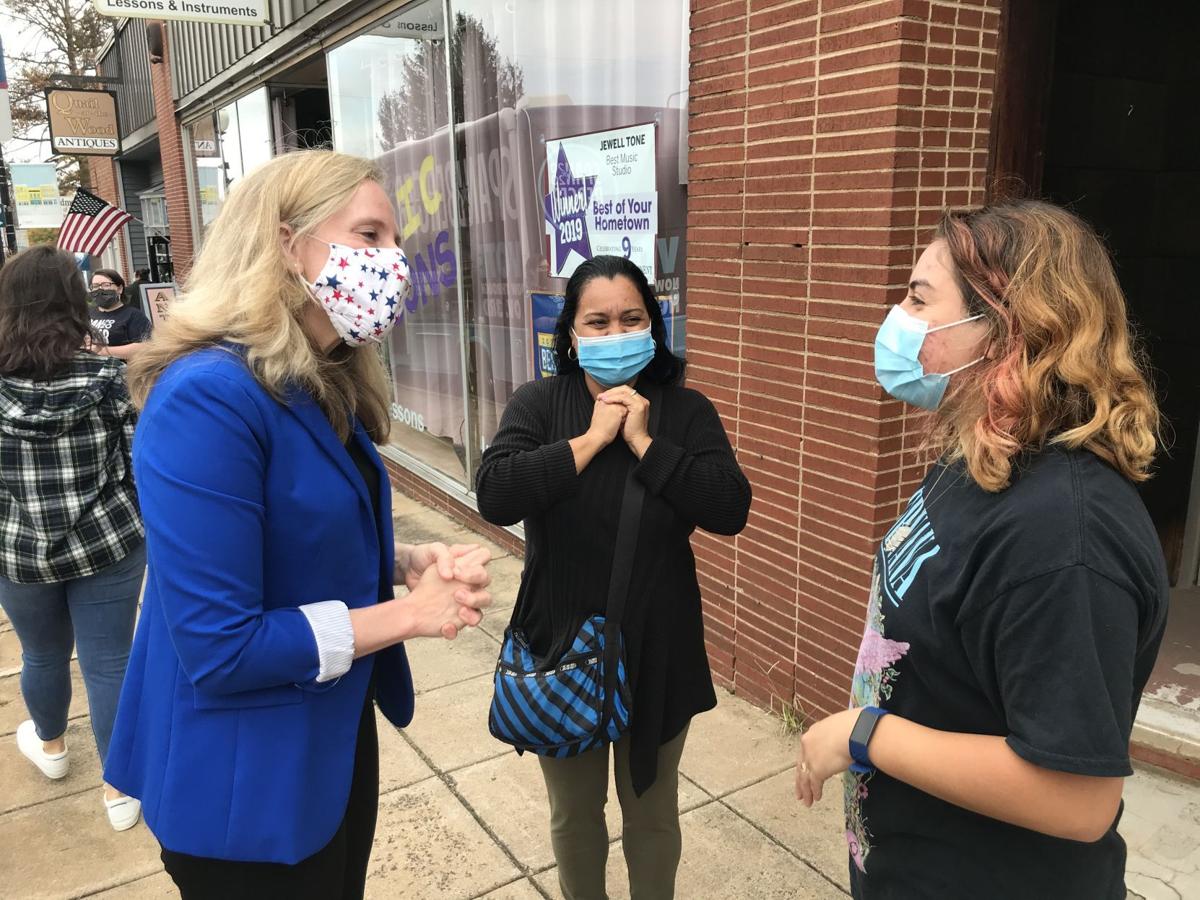 U.S. Rep. Abigail Spanberger chats Wednesday morning in Culpeper with Maria Lemus (left) and her mother, Reyna Ramos. When they spotted the lawmaker waving to passersby on Main Street, they pulled over their car to meet her. 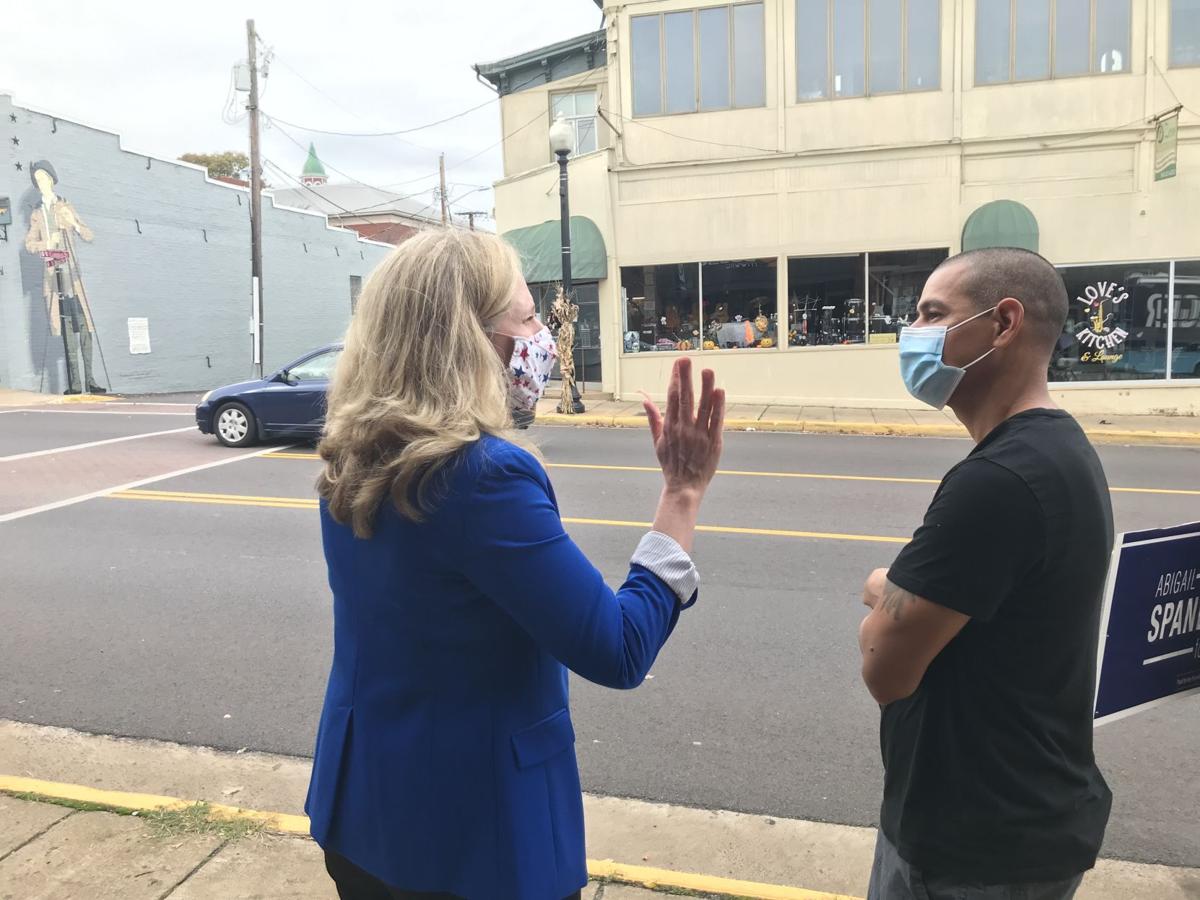 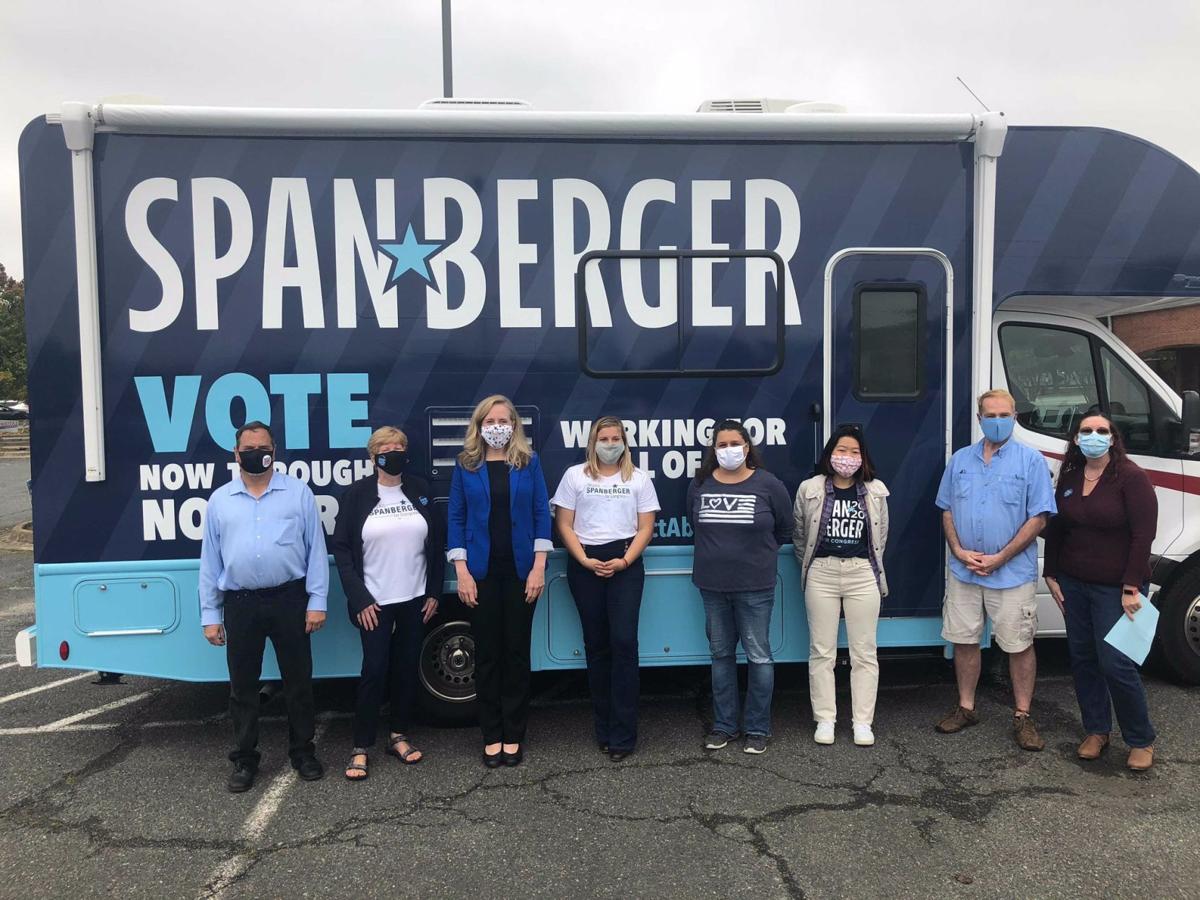 Volunteers and staff join U.S. Rep. Abigail Spanberger beside her new ‘SpanVan’ in Spotsylvania on Wednesday. 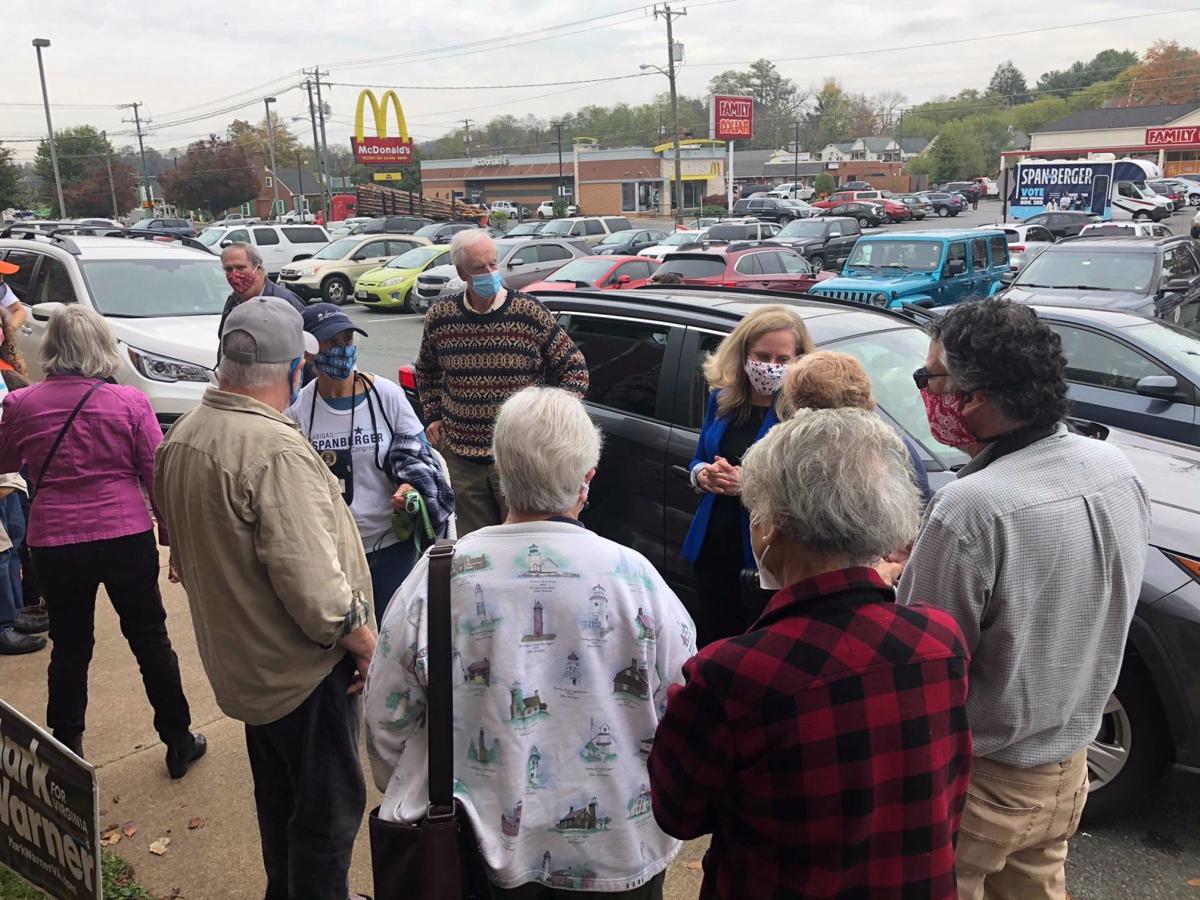 Downtown Culpeper gained an extra dash of electoral enthusiasm Wednesday when U.S. Rep. Abigail Spanberger barnstormed through town in a recreational vehicle her staff is calling the “SpanVan.”

For an hour, the supergraphic-wrapped RV parked along Main Street near the county voter registrar’s office as the House member greeted pedestrians and people driving past. Painted in navy and baby blue, the graphics urged viewers to “Vote now through Nov. 3rd” and advised them that the lawmaker was “working for all of us.” Today was the van’s debut.

“Hello, how are you? I’m Abigail Spanberger,” the freshman Democrat would say as she introduced herself to voters and others who were walking by.

Some drivers stopped, pulled over or turned their cars around to go back and meet the 7th Congressional District legislator, whose challenger this election is Del. Nick Freitas, R-Culpeper.

One door up the street, people patiently lined up along the sidewalk outside the voter registrar’s office, before stepping inside—masks on, usually two at a time—to cast their early ballots in November’s general election.

As Spanberger met with people and encouraged early voters, Culpeper Democrats held up campaign signs beside the SpanVan in front of the Boost Mobile store at Main and Cameron streets, waved them at motorists and offered bumper stickers for their cars.

The Virginia-born congresswoman, who lives in Henrico County, talked in Spanish with local Latino voters, encouraged job-seekers and career changers, and thanked people who had just cast their ballots.

“There is so much energy here during these final days of early voting,” Spanberger later said of Culpeper via Twitter. “I’m glad I got to speak with so many excited voters!”

She had begun her day in Spotsylvania County at an early voting site near Massaponax and, after Culpeper, she and her team drove on to the town of Orange and its voter registrar’s office.

As the campaign tour continues, Spanberger said she will travel throughout the sprawling 7th District between now and Sunday.

Amid COVID-19 angst, the director of the Rappahannock-Rapidan Health District is trying to shore up people’s spirits.

Some Culpeper County families will weather Thanksgiving in a better way thanks to agricultural education students at Eastern View High School.

Four other reasons to get this year's flu vaccine

Have you gotten your flu shot yet?

A letter to our Rappahannock Area Health District communities:

U.S. Rep. Abigail Spanberger chats Wednesday morning in Culpeper with Maria Lemus (left) and her mother, Reyna Ramos. When they spotted the lawmaker waving to passersby on Main Street, they pulled over their car to meet her.

Volunteers and staff join U.S. Rep. Abigail Spanberger beside her new ‘SpanVan’ in Spotsylvania on Wednesday.