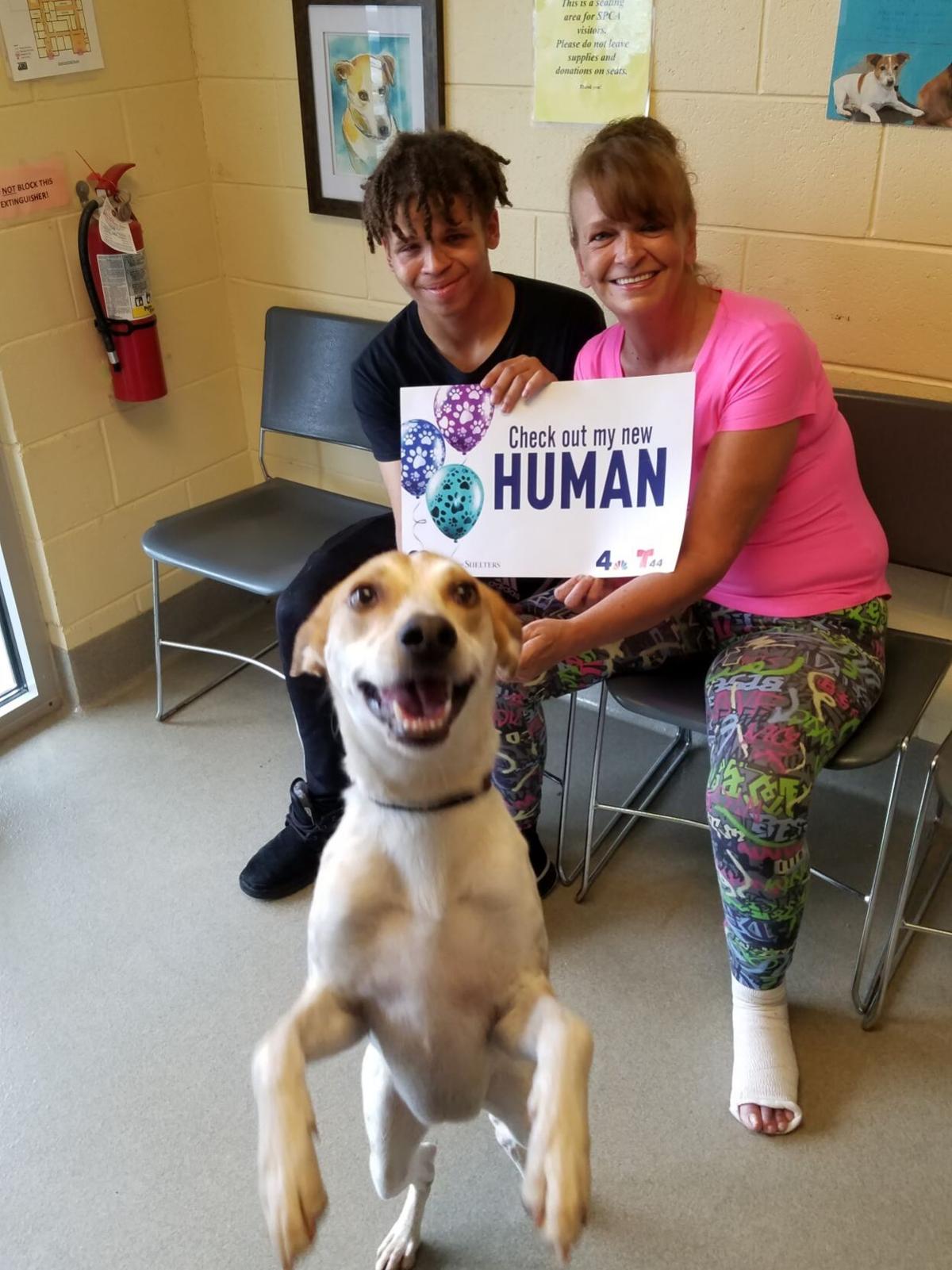 Paula Smith and her son pose with newly adopted Whipp at the Fredericksburg SPCA. 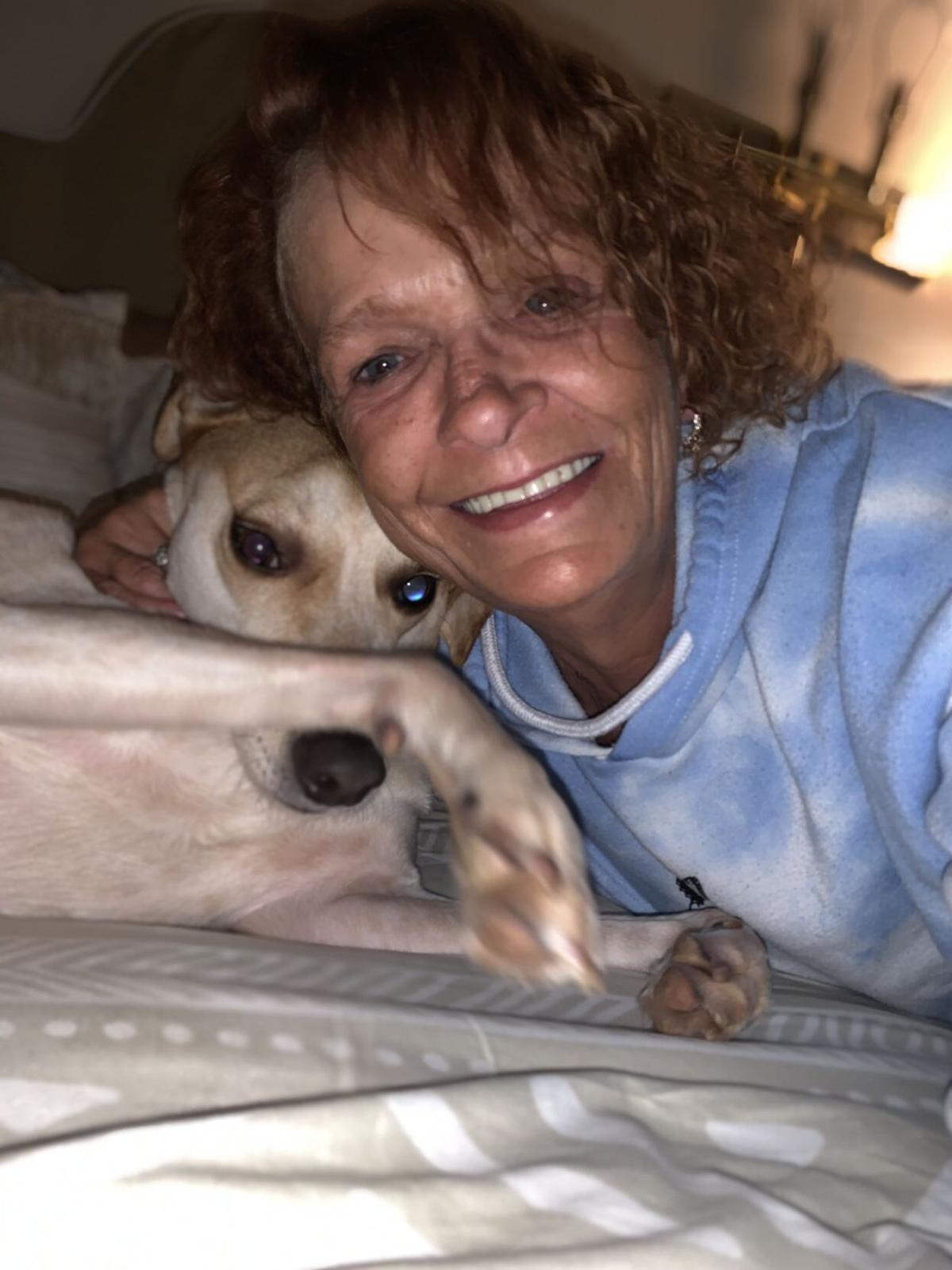 Paula Smith used the Safe Haven program to board her dog Whipp during a crisis.

She was afraid for her own safety and also for that of her dog, Whipp, who she adopted from the Fredericksburg SPCA in 2019. But moving out in a hurry meant moving into an uncertain future with the possibility of not being able to keep her furry companion.

“My main concern was for Whipp,” Smith said. “I didn’t want to lose him because I had promised him a forever home.”

She didn’t have an apartment of her own to move into and wasn’t sure where she was going to end up.

“I turned to the Fredericksburg SPCA and said, ‘I’m in need of some assistance. I don’t want to lose Whipp. He’s become my best friend,’” Smith said.

Katie Bates, who administers the SPCA’s PETS—People Empowered Through Support—program, found a place for Whipp in Safe Haven.

Safe Haven, a component of the PETS program—which also includes the mobile pet food pantry and low-cost veterinary care, provides temporary boarding for pets while their humans are in crisis.

“It was such a relief to know he was there and he was safe and fed and walked and had play dates with other dogs,” Smith said.

Smith visited Whipp every week while she was getting back on her feet and on Nov. 3, after signing a lease on an efficiency apartment, she was able to bring him home.

This week, the Fredericksburg SPCA announced that it is a partner organization of the Human Animal Support Services project—a partnership that will allow it to expand the reach of programs like PETS that seek to keep adopted animals in their homes.

HASS is a national coalition of shelters that have the ultimate goal of reducing the number of animals entering shelter by refocusing efforts, resources and support to offer community-based solutions.

This goal aligns with that adopted by the Fredericksburg SPCA about three years ago, executive director Carrie Withers said.

“Our primary goal is to help keep animals in the homes of the people who love them so we’re not having to continue to shelter animals,” she said. “We’ll always have a shelter component, but we have really been focusing on intake diversion and trying to keep animals in the homes by providing food and supplies and medical services to those in need.”

Withers said enrollment in the PETS program has tripled in the past year—a result of the pandemic and related crises such as eviction, domestic violence and long-term illness.

Becoming a HASS partner organization will open up additional resources and enable the Fredericksburg SPCA to “continue funding these services to the community at the rate that we’re seeing continued need,” Withers said.

In addition to Safe Haven, the mobile pet food pantry and free and affordable veterinary care through the Locke Community Medical Center, the Fredericksburg SPCA works to support pet owners in crisis by offering pet behavior programs and connecting them with local organizations that provide support services for humans.

“It’s about making sure everybody is working together as one unit in the nonprofit community of Fredericksburg to provide as many resources as possible,” Withers said.

HASS’s work is supported by organizations such as the Rachael Ray Foundation, PetSmart Charities, Pedigree Foundation and Petfinder, among others.

Withers said the Fredericksburg SPCA is always looking for donors to support its shelter-diversion and community support efforts. Specifically, she said the organization need a donation of warehouse space to house an expanded pet-food pantry.

“We are in collaboration with people across the country to be able to establish pet food banks and one of our goals is to be able to do,” she said.

Smith, who is saving up money so that she can get Whipp a house with a yard to run around in, said she and Whipp consider the Fredericksburg SPCA to be “a second home.”

“I know they care just as much about Whipp as I do,” she said.

With students and staff back in classrooms after the holidays, COVID-19 case numbers and quarantines have risen markedly during the past two w…

Every December, the Culpeper branch of Wreaths Across America decorates the graves of thousands of fallen heroes at Culpeper National Cemetery.

Paula Smith and her son pose with newly adopted Whipp at the Fredericksburg SPCA.

Paula Smith used the Safe Haven program to board her dog Whipp during a crisis.