A frame from a June 16 surveillance video shows someone appearing to throw an incendiary at the Virginia Department of Corrections’ Adult Probation and Parole building on Orange Road in the town of Culpeper. 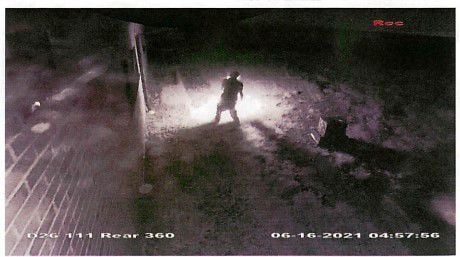 A June 16 surveillance video shows a man with an incendiary device.

The public is asked to aid investigators in identifying the person who set fire to the Virginia Department of Corrections probation office in the town of Culpeper, the Virginia State Police said late Wednesday.

The building’s surveillance video showed an individual, described as an adult male, light something in his hand and throw it at a window. The probation office wasn’t occupied at the time.

The suspect was seen wearing a white or gray sweatshirt and baggy pants, Coffey said.

Anyone with information about the individual is asked to call Virginia State Police at 540-829-7742 or email them at bci.culpeper@vsp.virginia.gov.

In many ways, Kaylin Hart was a typical 12-year-old girl: she enjoyed hanging out with friends, riding her bike and getting new shoes.

A frame from a June 16 surveillance video shows someone appearing to throw an incendiary at the Virginia Department of Corrections’ Adult Probation and Parole building on Orange Road in the town of Culpeper.

A June 16 surveillance video shows a man with an incendiary device.