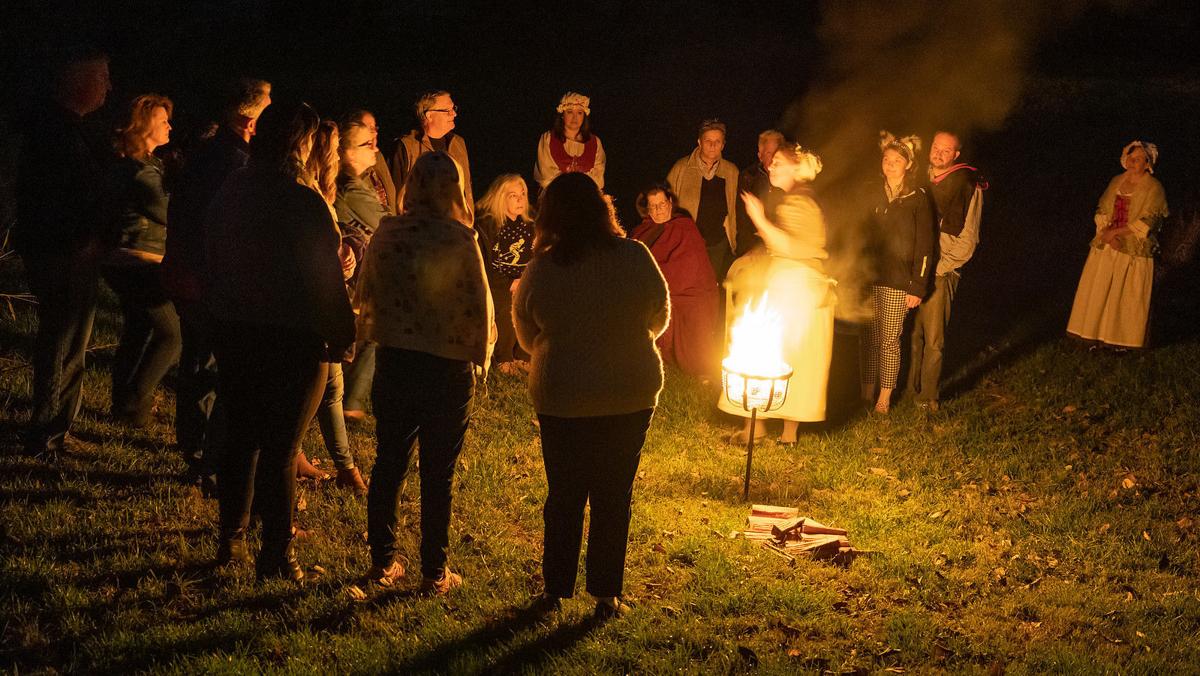 An interpreter tells visitors about Culpeper County’s oldest brick mansion as wood blazes in a cresset, an iron basket used in Colonial times, during ‘Salubria After Dark’ in 2019. 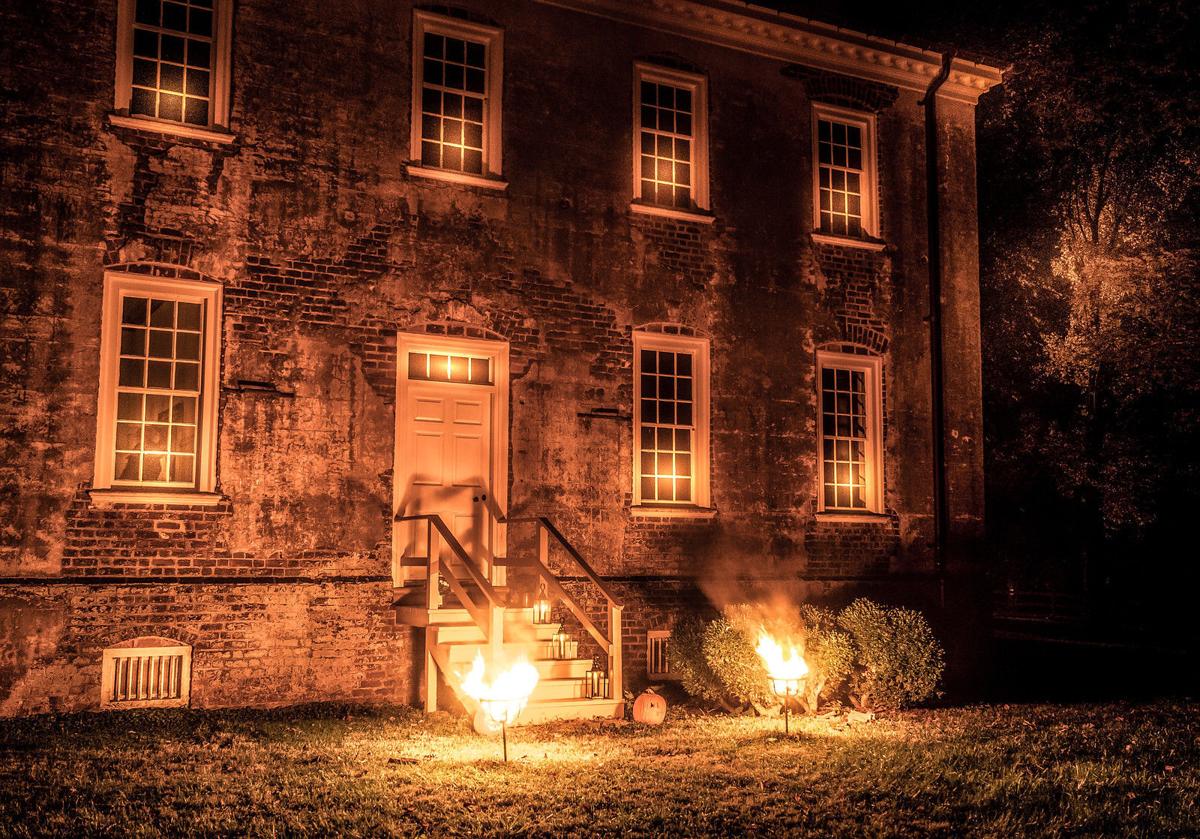 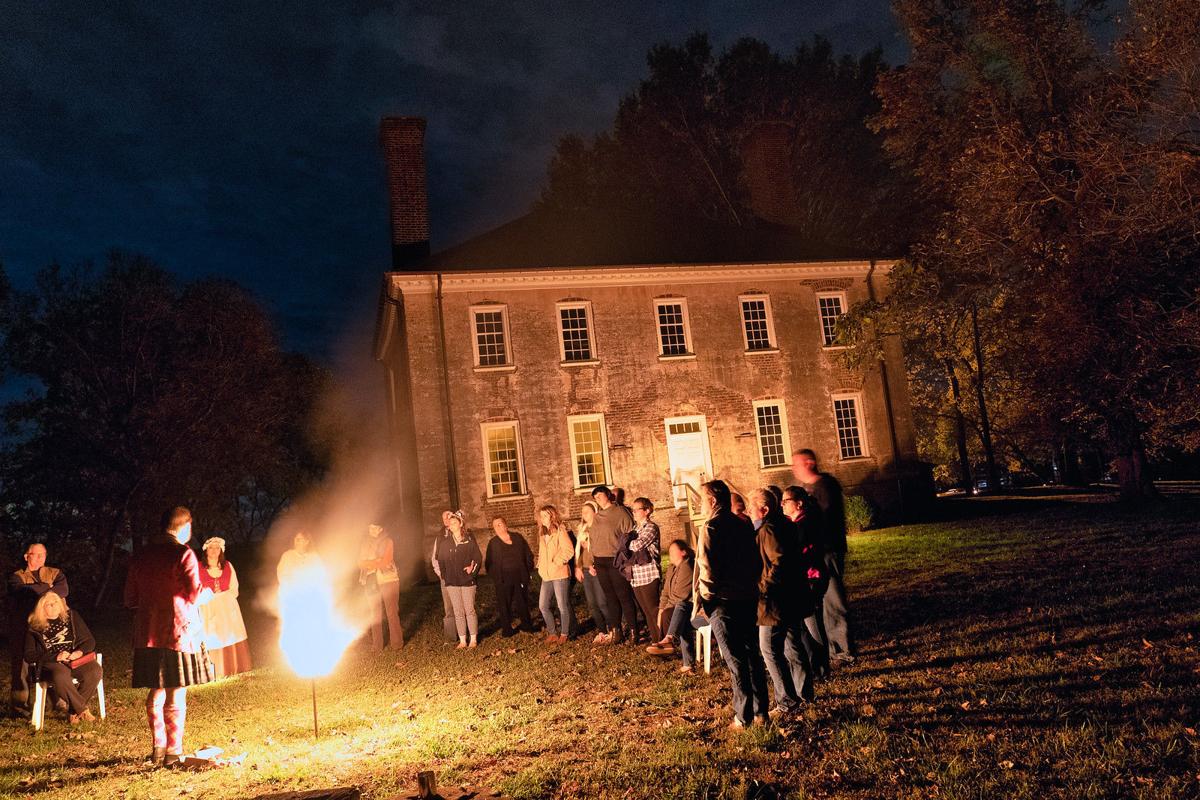 Visitors gather outside Salubria, built by the Rev. John Thompson, rector of Culpeper’s Little Fork Church from 1740 to 1772, for his wife, Butler Brayne Spotswood Thompson.

Looking for something to fright and delight young and old alike?

Plan to spend part of a night outside circa-1757 Salubria, Culpeper County’s oldest surviving brick mansion. On Oct. 22 and Oct. 23, three veteran Virginia storytellers will share “spook-tacular” tales from across the land, according to the Germanna historical foundation, the site’s steward.

Each tour during Salubria After Dark will last about an hour, rain or shine, starting at 7 and 8:30 p.m. Friday and 7 p.m. Saturday.

A handsome Georgian-style manse, Salubria was built by the Rev. John Thompson, rector of Culpeper’s Little Fork Church from 1740 to 1772, for his wife, Butler Brayne Spotswood Thompson. She was the widow of Alexander Spotswood, the royal governor who had imported two shiploads of German craftsmen to develop his sprawling properties on Virginia’s western frontier.

This weekend, apportioned into three groups of 20, participants will be led by a Germanna Foundation staff member to three stops, where everyone will be greeted by a professional storyteller.

Among the yarn-spinners is Darci Tucker, who tells tales in schools across the country. She shares festival stages with some of America’s best-known storytellers, has presented at the National Storytellers Conference and regularly appears in the “Stories That Make a Difference” benefit concert series produced by the Weavers of the Word Storytelling Collaborative.

Another presenter will be Gayle Turner, who’s “been telling stories since they were called lies,” the foundation said. Having appeared on stage for more than 60 years, he revels in sharing personal stories as well as tales from literature and history, the foundation said. Executive producer of The Storytellers Channel, Turner is president of the Virginia Storytelling Alliance.

The third presenter will be Sarah Brady, a storyteller, actress and writer. Her acting credits include such roles as Nurse Kelly in “Harvey,” Perdita in “A Winter’s Tale,” and Lady Macbeth in “Macbeth.net.” Brady taught communication, acting and speech for six years at the college level, and holds a master’s degree in interpretative speech and a bachelor’s degree in speech education.

Tickets cost $15/person and are only available online at Eventbrite.com; search for Salubria After Dark. The event does not include a tour of the mansion house and takes place completely outdoors.

Parking onsite, off State Route 3 just east of Stevensburg, is free. Tickets are nonrefundable unless the foundation must cancel due to COVID-19; should that happen, it will issue refunds. The historic site’s address is 19173 Salubria Lane.

The Germanna Foundation said Salubria After Dark is recommended for children 13 and up, as some of the stories may not be suitable for young children.

The event will take place outside, where masks are not required, but the foundation recommends social distancing.

What do we know about the Omicron variant?

WHO designates new COVID strain Omicron as ‘variant of concern’

WHO designates new COVID strain Omicron as ‘variant of concern’

Jury awards millions in damages for Unite the Right violence

CHARLOTTESVILLE—In a mixed verdict, a jury awarded more than $25 million in damages Tuesday against white nationalist leaders for violence tha…

An interpreter tells visitors about Culpeper County’s oldest brick mansion as wood blazes in a cresset, an iron basket used in Colonial times, during ‘Salubria After Dark’ in 2019.

Visitors gather outside Salubria, built by the Rev. John Thompson, rector of Culpeper’s Little Fork Church from 1740 to 1772, for his wife, Butler Brayne Spotswood Thompson.