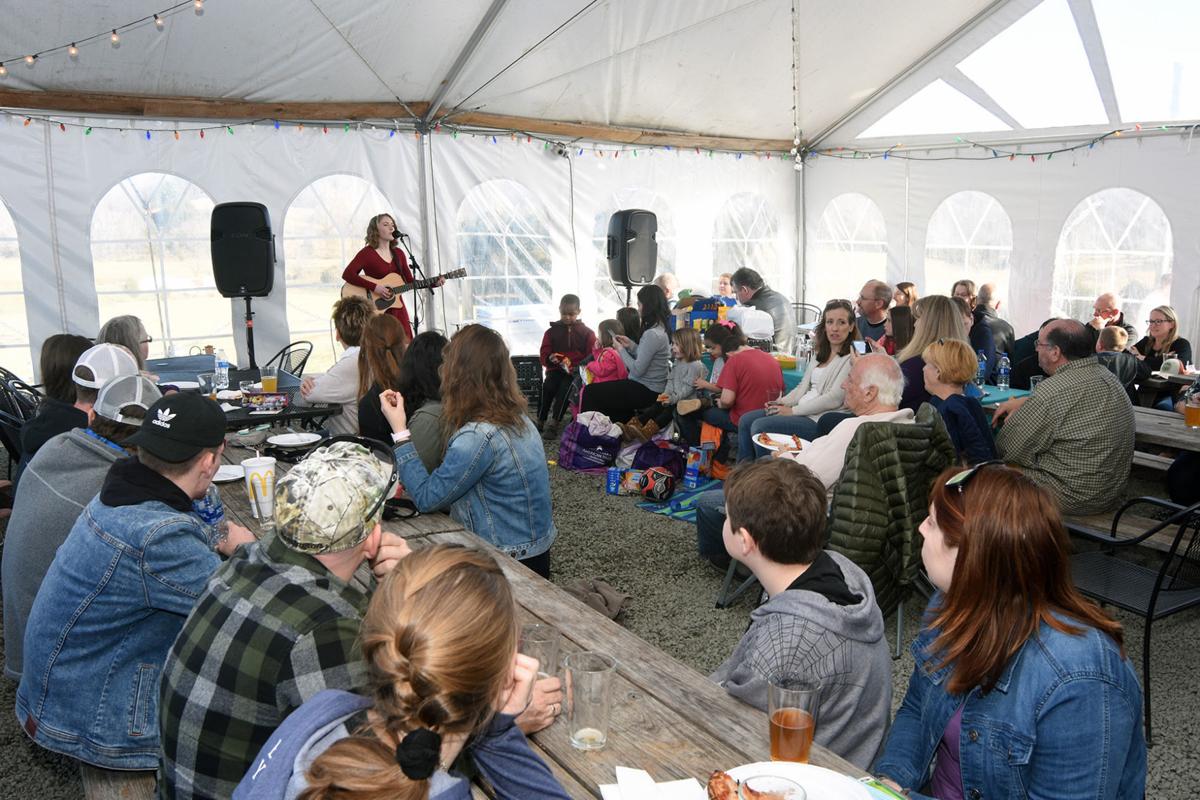 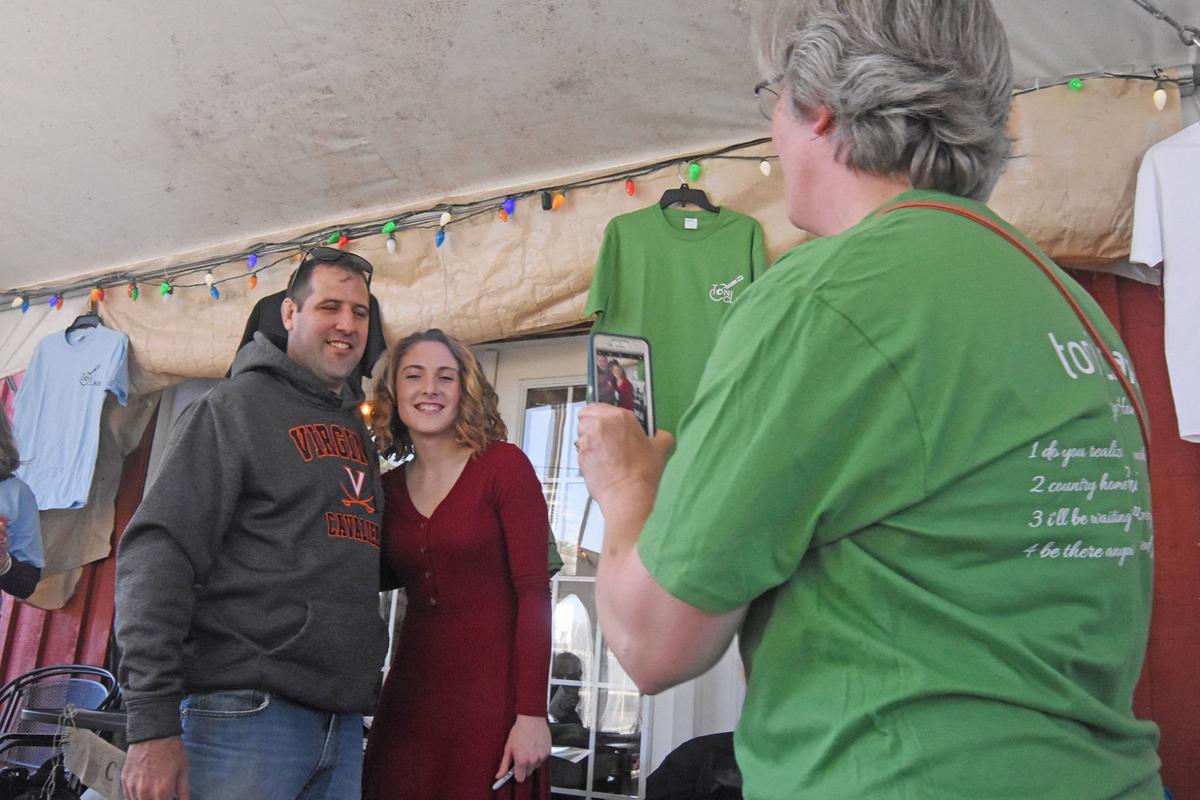 Toni Clare of Aroda poses with a friend for a snapshot taken by her aunt, Elizabeth Gebert, who traveled from central Pennsylvania to attend her niece’s album-release party in Madison. 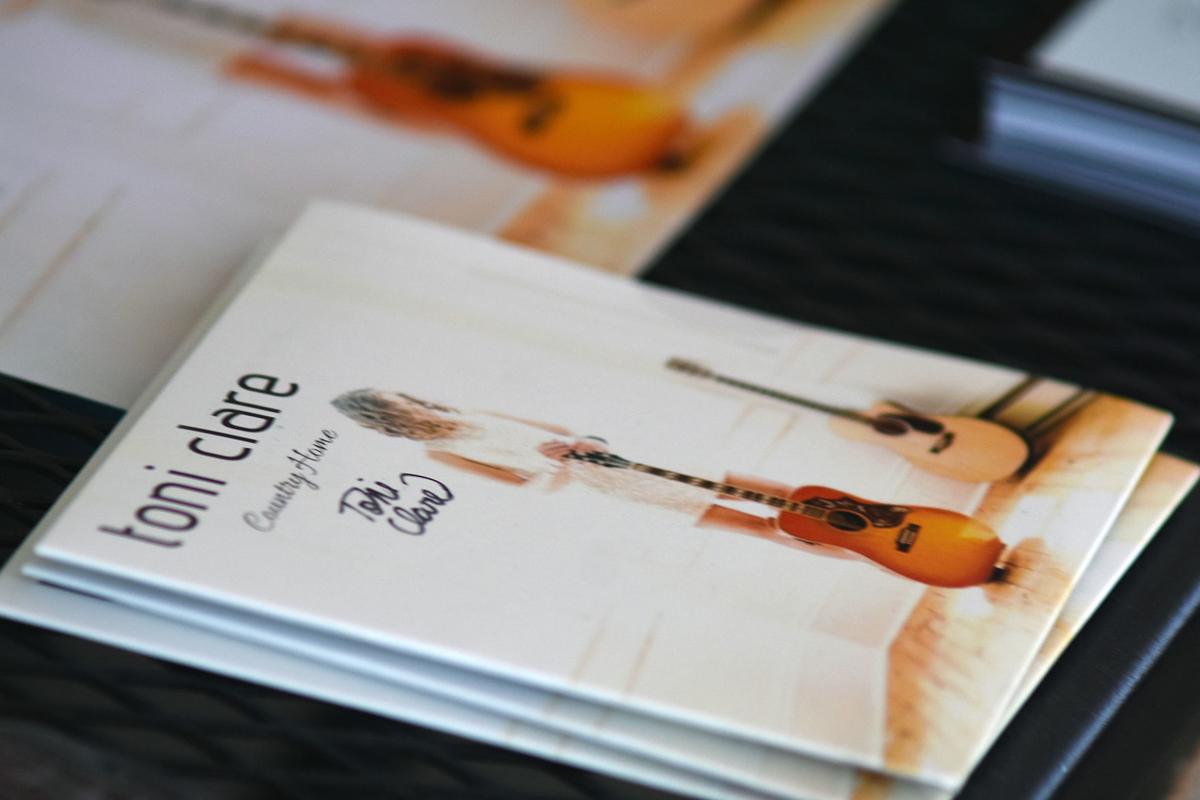 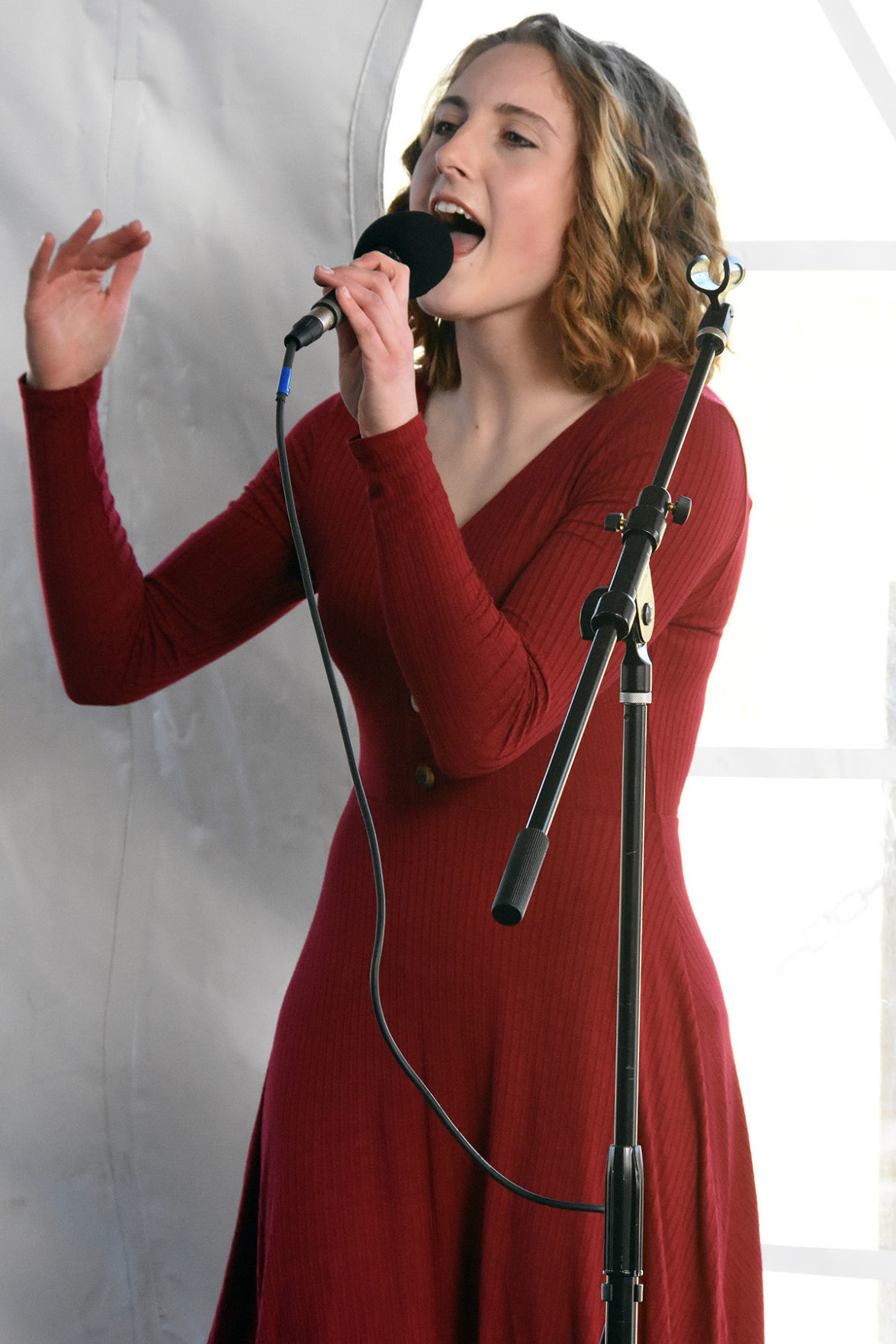 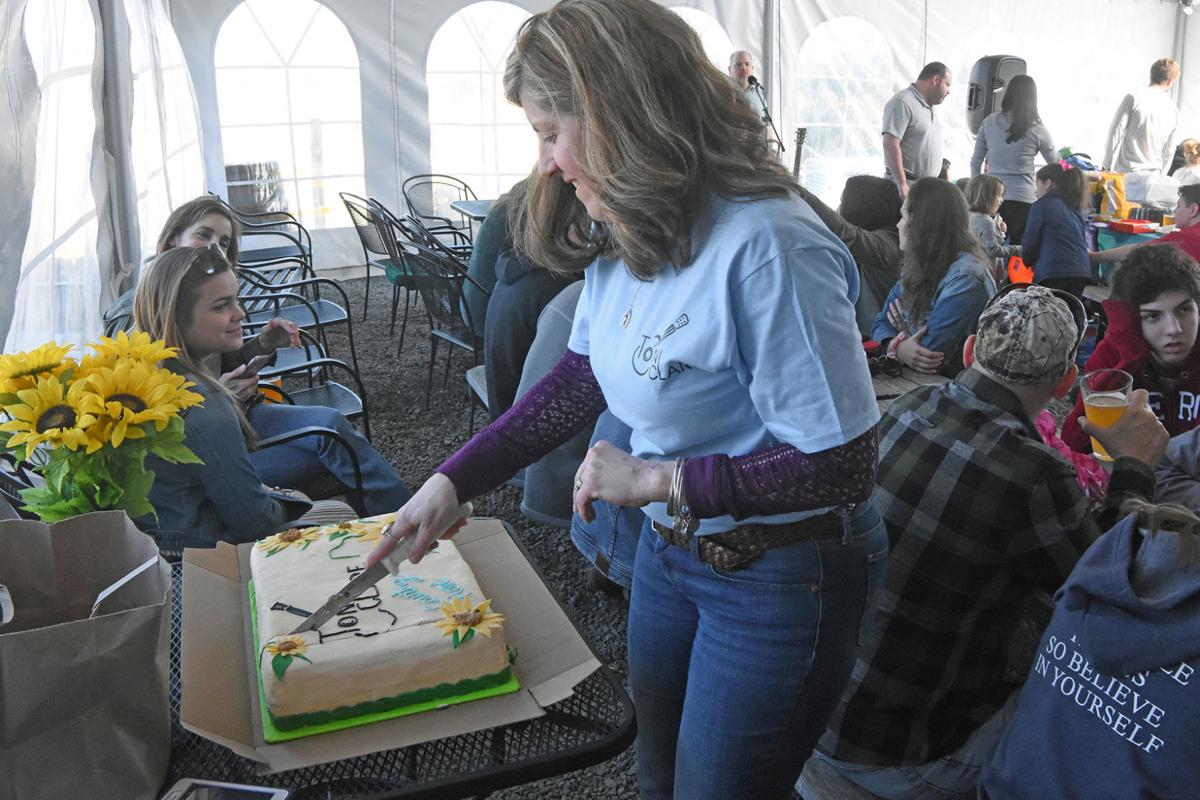 Toni Clare of Aroda poses with a friend for a snapshot taken by her aunt, Elizabeth Gebert, who traveled from central Pennsylvania to attend her niece’s album-release party in Madison.

Toni Clare is headed places. And they’re not the usual ones for a high school senior.

The Madison County native is bound for Nashville, in the next stage of a musical career that’s already offered her experiences of which few people can even dream.

The singer-songwriter launched the danceable, radio-ready set of country-pop recordings on Sunday at a place that’s dear to her heart and home, Bald Top Brewing Co., a microbrewery and event venue set in Madison’s beautiful Blue Ridge foothills.

The March 23 release party by Clare, a former Culpeper Has Talent finalist, drew about 100 appreciative friends and admirers, plus family members.

“I really like these songs I’ve produced,” the 17-year-old artist said in an interview. “And I’ve got more coming.”

Just before her school’s spring break, which Clare is now enjoying in a warmer clime, was the perfect time to release “Country Home” on CD, Spotify, Apple Music and all other major digital platforms, she said.

“A lot of the music feels like summertime,” Clare said. “It’s all about going to the river and having a fun time, about living in the moment, and not having to worry about what tomorrow brings.”

She dedicated the album to her friends, and said their recent experiences are reflected in many of the songs’ lyrics. She wrote every tune, and is especially pleased by two.

“I wanted ‘Country Home’ to have a smooth melody and be fun to sing to, no matter what age you are,” Clare said of her album’s title track. “I know many of my fans live somewhere similar to Madison County, where I come from, and I want them to remember experiences like this. For those from the city, I want them to know what they’re missing and to get out and experience a little back-creek living.”

She describes “Do You Realize” as an upbeat country love song about a girl who can’t get up the nerve to talk to a guy on whom she has a crush.

“I wanted this first song of mine to be catchy and one that everybody can sing and dance along to,” Clare said. “I also wanted to experiment right off the bat with different sounds and techniques, thus the ‘radio voice’ toward the later part of the song.”

All about a feeling

Since Day One, her scenic, rural surroundings have shaped her music and lyrics.

“It’s about living on a farm near the small town of Madison, with bluegrass music in the background,” Clare said. “There is lots of space here, lots of good music, and the landscape is very inspirational.”

The songwriter, who attends Madison High School, said she will pushing her music hard this spring and summer via radio, the web and in performances. On May 18, she’ll play at Jewell Box in Culpeper, from 7 to 9 p.m.

Calling it “crazy,” Clare said she couldn’t believe it when she learned in January that AWAL selected her to join its roster of artists.

The singer is backed by an impressive team. Her manager, Larry Fridie, managed the legendary James Brown, the Godfather of Soul.

“Toni Clare is one of the hottest upcoming country artists I have seen,” Fridie says of the Virginia artist. “James Brown would love her, like we all do!”

Her voice coach is Peggy Johnson of Nashville, a former member of the Board of Governors for the Grammy awards. Michi Robinson, who works with Justin Bieber and Usher, is overseeing her artistic development. Her producers are multi-platinum duo of Tanner Hendon and Wyatt Oates of Madison Records, and Kamaal Malak Productions in Nashville. Malak is a former member of Arrested Development.

“She is awesome to work with,” they said of Clare. “Her songwriting is very mature for her age, and she is only getting better.”

But such success came only after years and years of music jams, practice, performances, and steady songwriting.

Clare learned to play guitar at age 8 after returning from a trip to a Nashville music festival with her parents. That visit was the inspiration that set her music career in motion.

Though country music is her home, Clare said she enjoys bluegrass and country rock.

Of late, she’s been striving for a fresh sound like that of Sheryl Crow, Allison Krauss or Taylor Swift.

Asked about her favorite experiences as a performer, she cited a sold-out show at the Culpeper State Theatre in Virginia, a lively 500-person crowd at the Lafayette Music Room in Memphis, and the Bluebird Cafe in Nashville, an intimate, beloved venue that launched the careers of Kathy Mattea and Taylor Swift.

“That was really awesome, one of our favorite and most fun shows,” she said. “So many people came out, the weather was great, and it is so pretty in D.C.”

Clare credits her love of music to her parents.

“Even though they’re not musicians themselves, they love music, and we grew up with music all around us,” she said. Her two sisters Kati, a mandolin player, and Frances, a fiddler, also sing and perform.

“I am so grateful for them,” Clare said. “Before I was 16, they drove us everywhere to perform, and they still support me in every way. ‘Just follow your dreams,’ they’ve always been telling us that. That has meant the world.”

This fall, Clare plans to move to the Nashville area, that source of inspiration and of her hope for the future. But she’s not moving there blindly.

She has been accepted at Middle Tennessee State University near Murfreesboro, and plans a double major in recording and songwriting.

“I definitely know what I want to do for the rest of my life,” she said of her further immersion in the music business. “And things are really falling into place.”