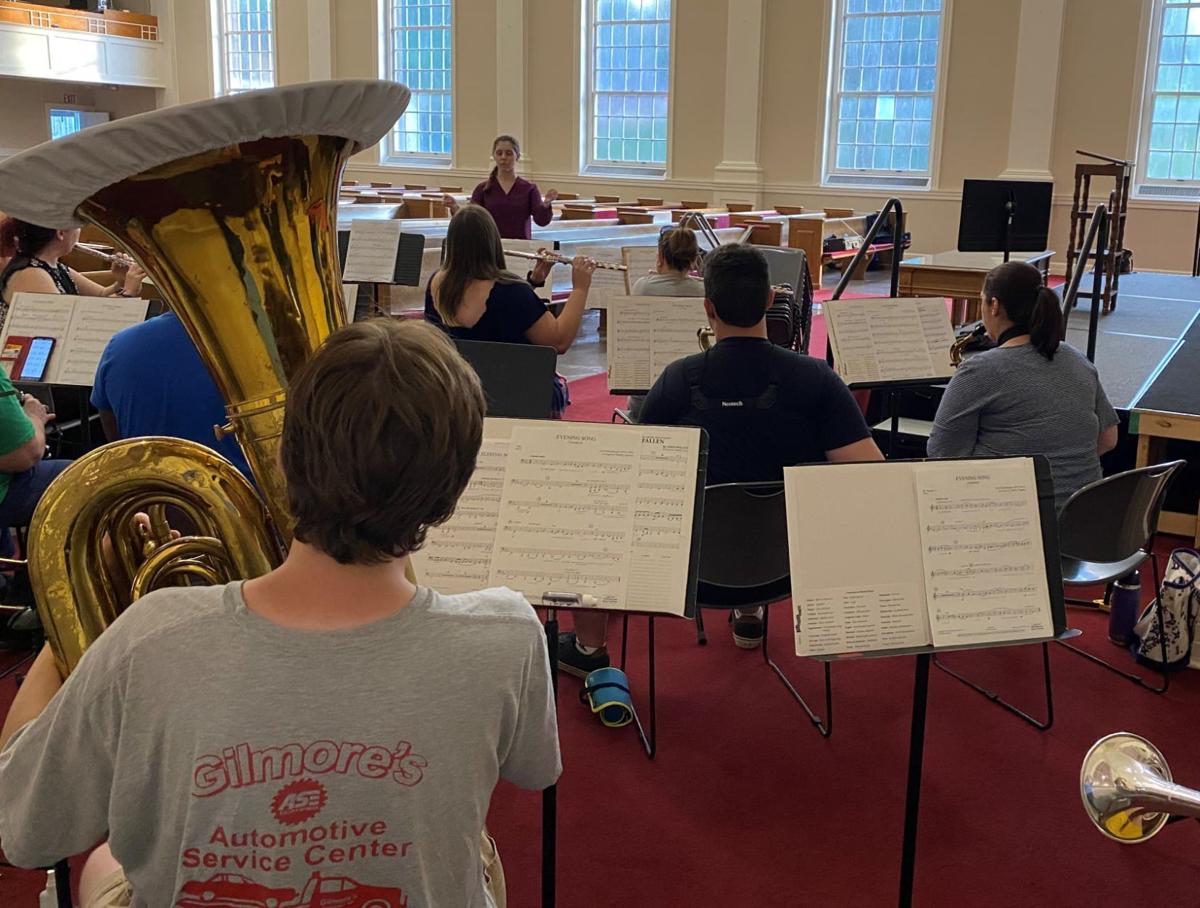 Henry Taylor plays his tuba with a COVID-19 cover to avoid spreading virus particles, as Chiara Head leads the band Sunday night in the sanctuary of Culpeper Baptist Church. 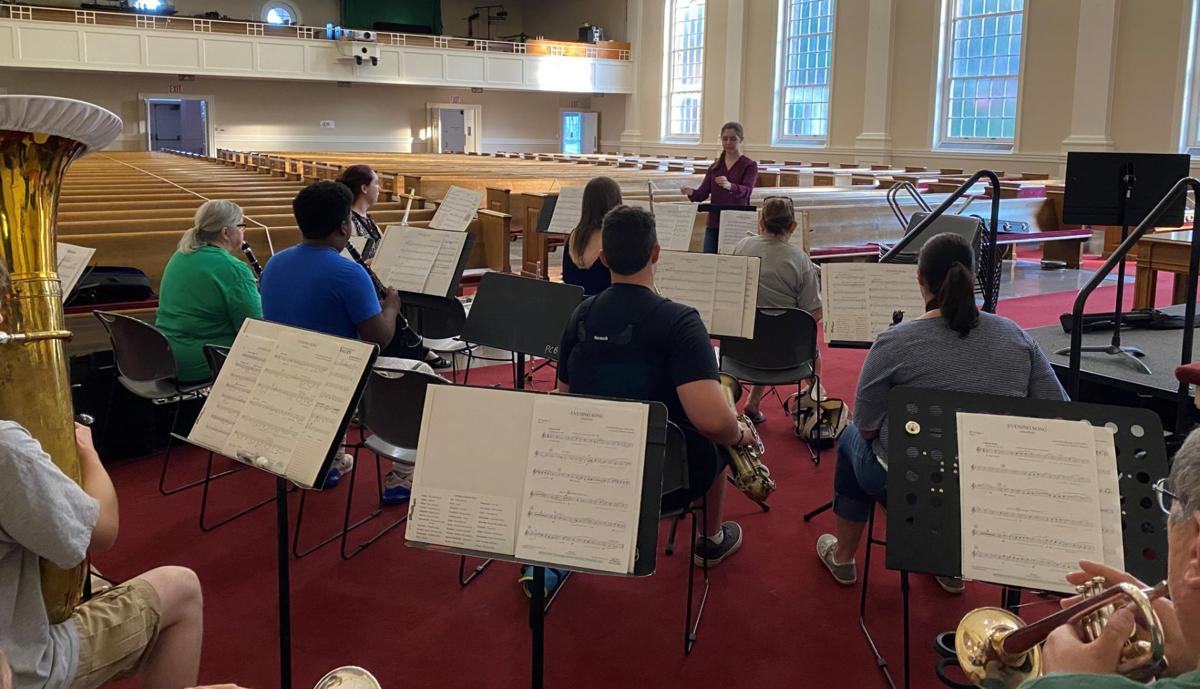 Culpeper-area musicians are gearing up for something the community hasn’t seen in a while: A live, public Independence Day concert.

Last Sunday night, to get ready for that event, a dozen or so people from around Culpeper gathered for the first time in nearly 18 months to play instruments together in the same room. Windmore’s Piedmont Community Band met in Culpeper Baptist Church’s sanctuary to practice for its July Fourth performance.

Mary Ellen Hutchind was elated to be back.

“I was very encouraged to see old friends as well as some new members,” Hutchind said in an interview this week. The retired middle school math teacher has played flute and clarinet with the band since it started in 2016.

“Live music is an experience that can’t be duplicated virtually,” she added. “To be there, in person, to receive what has been practiced and prepared for the listening enjoyment of the audience is a matchless pleasure, and becomes a memory for many years to come.”

Like musical groups around the world, the band ceased all in-person practices and performances in early 2020 as the United States experienced the start of the spread of the highly contagious novel coronavirus. Its members last rehearsed on March 8 as they were looking forward to performances on Memorial Day, in June and the annual Fourth of July Celebration—all of which were canceled.

While the pandemic raged, band members met virtually to perform three online pieces, which are now available to view on the Windmore Foundation for the Arts’ YouTube channel.

“Our most recent release is a collaborative project with Windmore’s Pen-to-Paper Writers’ Group for Memorial Day 2021,” band manager Tammy Buckalew said. “Virtual band videos gave us an opportunity to share music with the community while we were unable to rehearse and perform in person, created by having members of the band record themselves playing their parts.”

All of that footage was edited together to create the finished videos.

In August, when a new pastor arrived at Culpeper Presbyterian Church Buckalew, who works at the church, soon learned that the Rev. Joseph Taber plays the trombone. She invited him to join the band.

Taber jumped in to aid the band’s virtual endeavors, assisting with editing its video series.

On Sunday, Taber attended his first in-person rehearsal with the band.

“I was surprised and delighted to find how quickly we fell in sync with one another,” Taber said of the experience. “From where I sat, within about 10 minutes of our first note, we didn’t just ‘sound pretty good, considering’—we sounded good. I attribute that to the shared love of music within that room.”

The pastor said he finds music to be a great equalizer, adding that musicians don’t much care about all the divisions that our culture throws at us, once the music begins.

“All that matters is, ‘Can you play?’” he said. “It’s why so many musicians and bands ended up contributing to desegregation, and why one of the first things that happened after the Berlin Wall came down was a concert as two orchestras [East German and West German] merged into something even more powerful and beautiful than they were individually.”

In the past year, Chiara Head became the Piedmont Community Band’s conductor. A graduate of George Mason University in music performance, Head played with the band while she was in high school, so she understands the musical group’s history in addition to her musical talents, Buckalew said.

“She will be a great asset to us as we move forward after the pandemic,” the band manager added.

The Piedmont Community Band is preparing for its July 4 appearance at the Freedom Car and Truck Show for Christ-Centered Addiction Restoration Services, or CARS. The concert will be held from 1 to 5 p.m. in Culpeper United Methodist Church’s spacious parking lot at 1233 Oaklawn Drive in town.

For those who wish to participate in the car show, it will cost $20 to register ahead of time and $25 on the same day. “Come out and enjoy music, raffles, food and a beautiful display of cars and trucks,” a flyer for the event states. “All makes, models and years welcome!” Awards will be given for Best of Show, Board’s Pick, People’s Choice and Top 25.

Attending the show, including the band’s performance, is free.

Buckalew said the band will continue to meet each Sunday from 6:30 to 8:30 p.m. in the sanctuary of Culpeper Baptist Church.

“We welcome players of all ability levels and ages from middle school to adulthood,” she said. “We would love to see anyone even remotely interested in playing!”

Taber said coming together in this way is something the community should note.

“In an anxious and divided world, a couple dozen of your neighbors come together to play in harmony,” he said. “Playing in harmony means we’re trying to weave our individual threads into something more powerful and beautiful than any of us could do individually.”

If harmony is something you’d like to see more of in the world, Taber said, “Our only question back is, ‘Can you play?’ “

Henry Taylor plays his tuba with a COVID-19 cover to avoid spreading virus particles, as Chiara Head leads the band Sunday night in the sanctuary of Culpeper Baptist Church.