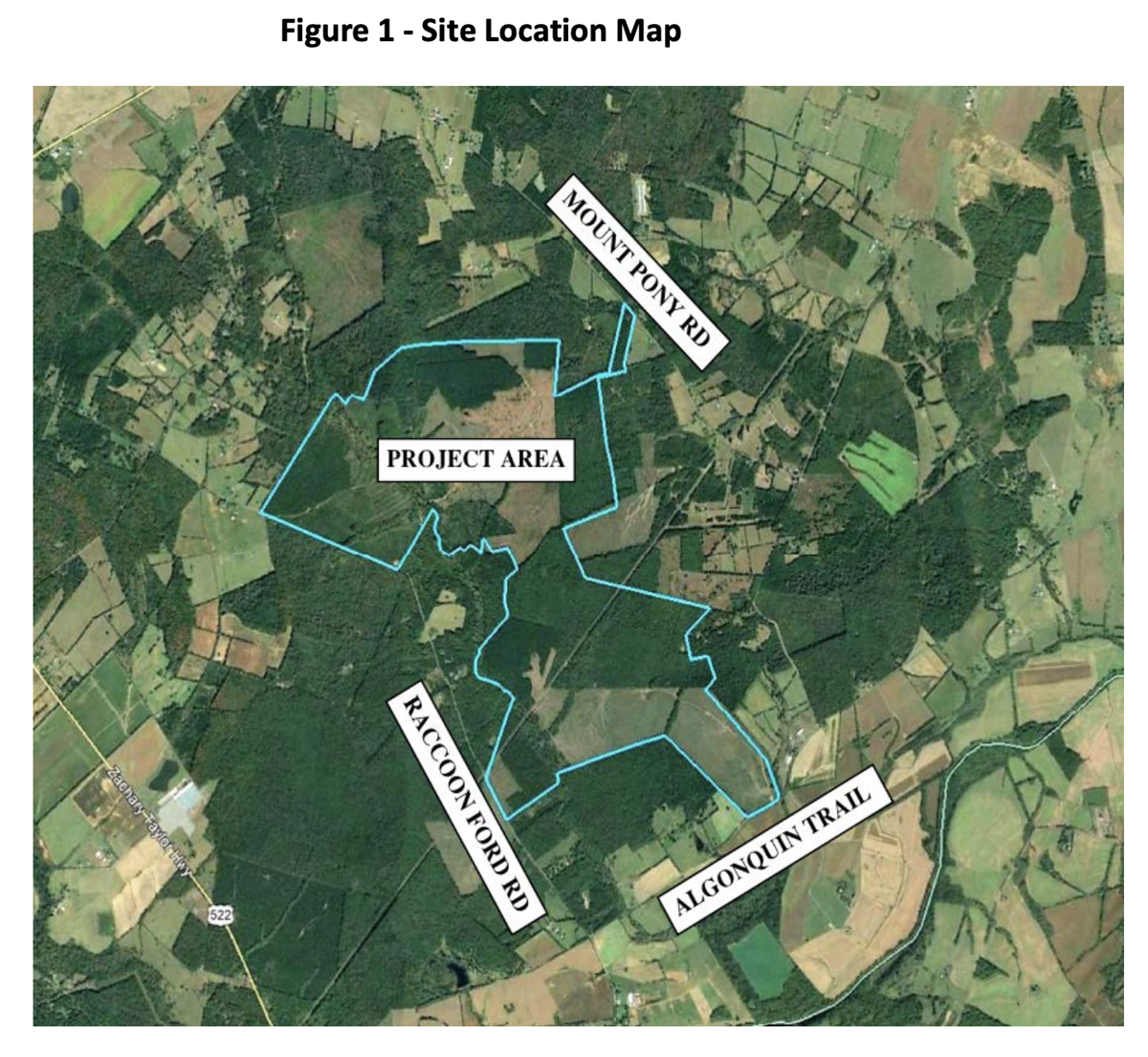 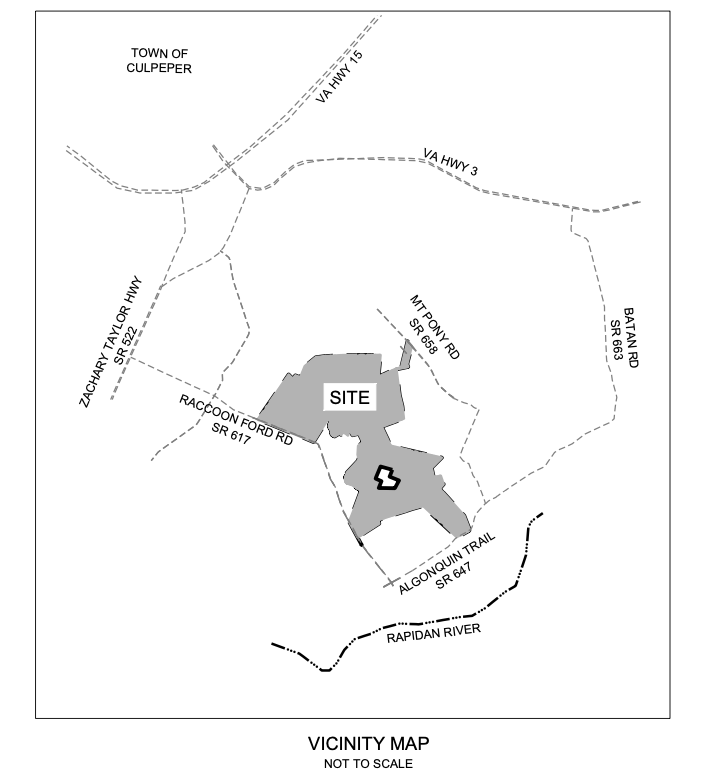 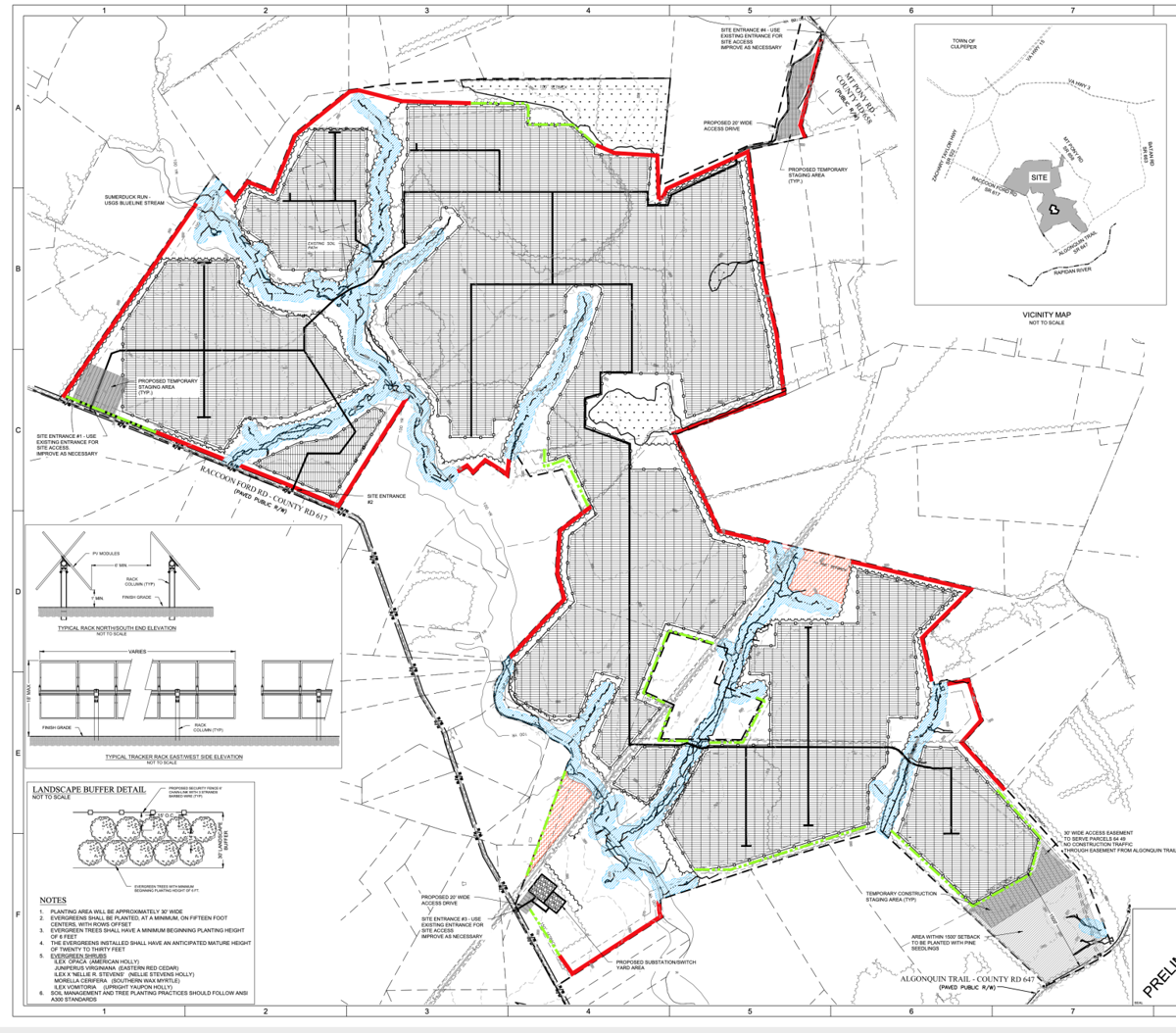 A North Carolina company proposes to build a 1,707-acres solar-powered electrical generating plant on Raccoon Ford Road in Culpeper, the second such project to be considered thereabouts by county officials.

Greenwood Solar LLC, an arm of Florida Power & Light, earlier had received the supervisors’ blessing for a 1,700-acre solar plant along Batna and Blackjack roads in the Stevensburg Magisterial District. The county Planning Commission is now reviewing Greenwood’s application.

Now, Strata Solar LLC of Durham, N.C., is seeking a conditional-use permit to place 960 acres of solar panels on 13 parcels it assembled three miles southeast of State Route 3 and State Route 522. The land is bisected by Dominion’s Remington-to-Gordonsville transmission line.

Solar plants being proposed in that area would feed Northern Virginia’s power-hungry data centers, providing renewable energy much desired by companies such as Amazon and Google.

Timber on much of the acreage was clear cut in the last five years and replanted with pine seedlings, the application states. All of the parcels are zoned A-1 Agricultural.

The leader of regional critics of industrial-scale solar plants expressed concern about Maroon’s proposal, and called for stronger oversight by Culpeper of them.

“The county has received yet another application to build a 1,700-acre solar power plant in Stevensburg, the same district as Greenwood Solar LLC,” said Culpeper resident Susan Ralston, president of Citizens for Responsible Solar. “Imagine, almost 3,000 acres of solar panels in one district! “It is time for the county to adopt a serious solar ordinance in order to protect our historic treasures and agricultural heritage.”

Maroon’s land is next to a large swath of acreage that Cricket Solar has proposed for in industrial-scale solar plant, only to withdraw its application after local residents organized in opposition.

Maroon said its proposal differs from Cricket’s plan, to avoid the objections to that application.

Its development would be set back 1,500 feet from Algonquin Trail, with vegetation and an earthen berm ensuring limited visibility of its solar arrays and with no access from Algonquin, whose residents have objected to the truck traffic that building and maintaining the plant would require.

Forest and natural vegetation “makes it possible for Maroon to seclude the solar farm in a manner that has not been possible with other solar applications,” the company told the county. “As such, the site is shielded from views in both Culpeper and Orange Counties.”

The plant would not affect agricultural land or soils, Maroon said.

Localities can receive nearly double the previous amount of machinery and tools tax; Culpeper would get $208,600 annually, it said.

Under another new law, Maroon proposes an additional $1 million payment to the county for its commercial operation.

Land developed for utility-scale solar is no longer eligible for land-use tax valuation, and will be reassessed by Culpeper’s commissioner of revenue at fair market value, Maroon said.

The company said its project will create jobs, with about 400 construction jobs available. Once the plant is operating, it will need 12 to 15 permanent employees.

Maroon Solar LLC is a subsidiary of Strata Solar, which describes itself as a leading developer, builder, owner and operator of utility-scale solar electrical facilities. Strata said it has extensive experience in Virginia, having developed several solar plants. It operates seven projects with 267 megawatts of generating capacity, and is building five more.

Senior royals walk in the Duke of Edinburgh's funeral procession

Echoes of the past are evident in Culpeper’s every-day scenery, despite the passage of more than a century-and-a-half. We are especially remin…

MANTEO, N.C. — One person was killed after a portion of an old bridge on the North Carolina Outer Banks collapsed and fell into the water, aut…

Culpeper PD: 2 men fled Target through side door with cart full of electronics

Early on April 4 morning, the following message appeared on the Twitter account of the Rev. Raphael Warnock, the newly elected U.S. senator fr…

Downtown business is located in former Peterson's Gold & Jewelry on South Main, has Airbnb, Botanical Oasis, in renovated space at back of quaint building.

It happened after 10 a.m. near the Madison County line and Leon’s Auto Parts, just north of Reva along a forested section of highway.

Before, the courtyard at Emerald Hill Elementary was simply a relatively unused green space in the middle of the Culpeper County school, Princ…

Deprived living conditions and neglect of animals was observed at the residence of a 56-year-old woman during recent execution of a search warrant, police said.

The Virginia Department of Health has identified the first two cases of a COVID-19 variant that initially emerged in Brazil and has since pushed its hospital systems to crisis levels.