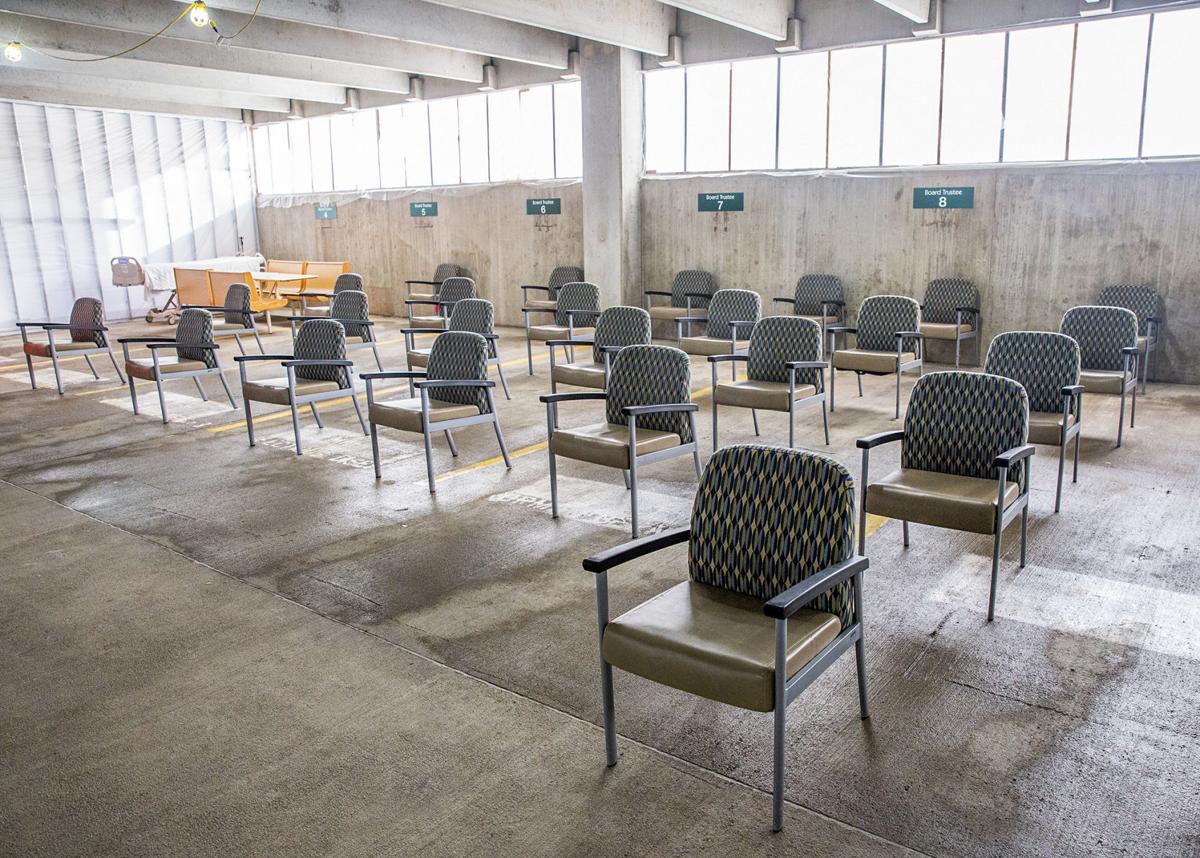 Chairs are set up in Mary Washington Hospital’s garage in Fredericksburg last week. The building will serve as a field hospital to help handle COVID patients. 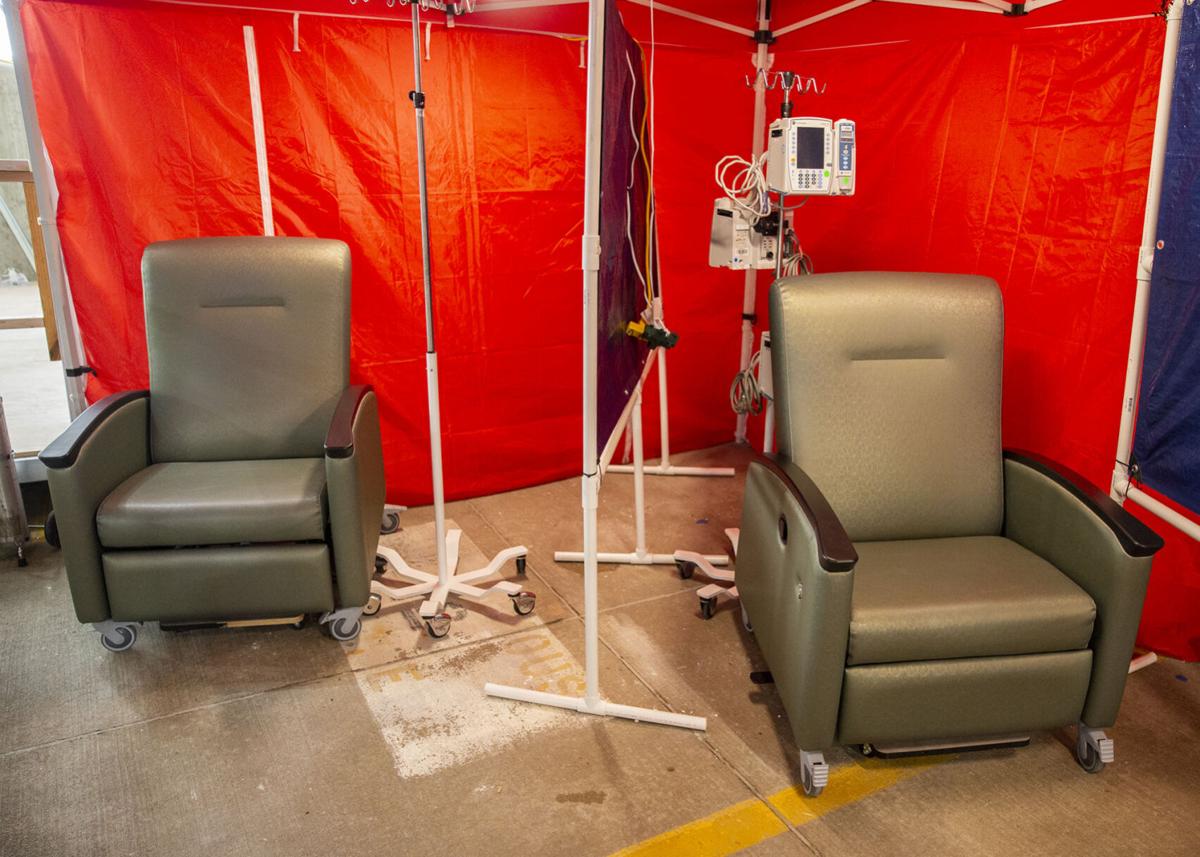 Recliners in the field hospital await patients with mild to moderate COVID symptoms. 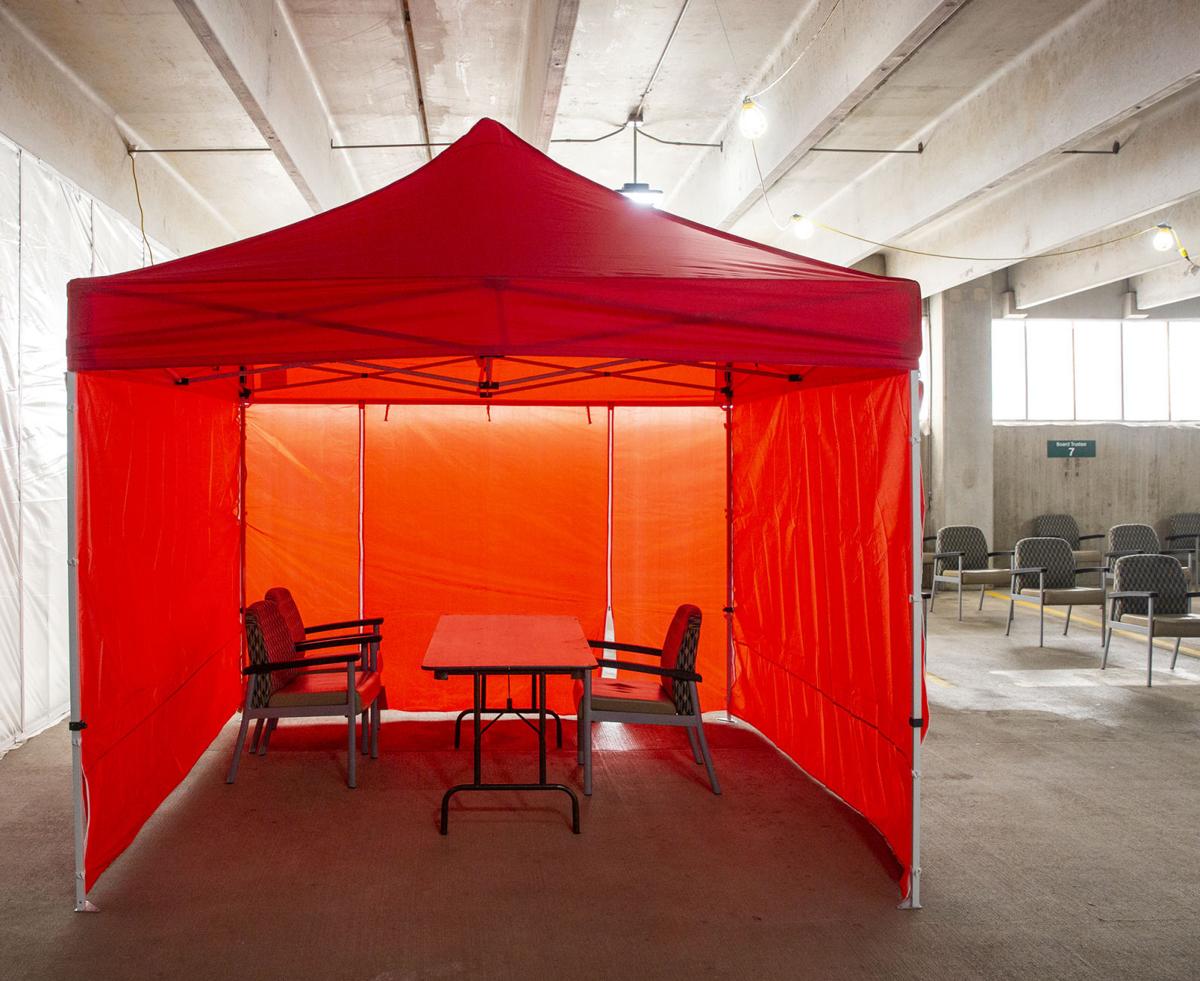 Mary Washington Hospital has used its field hospital as an infusion clinic. 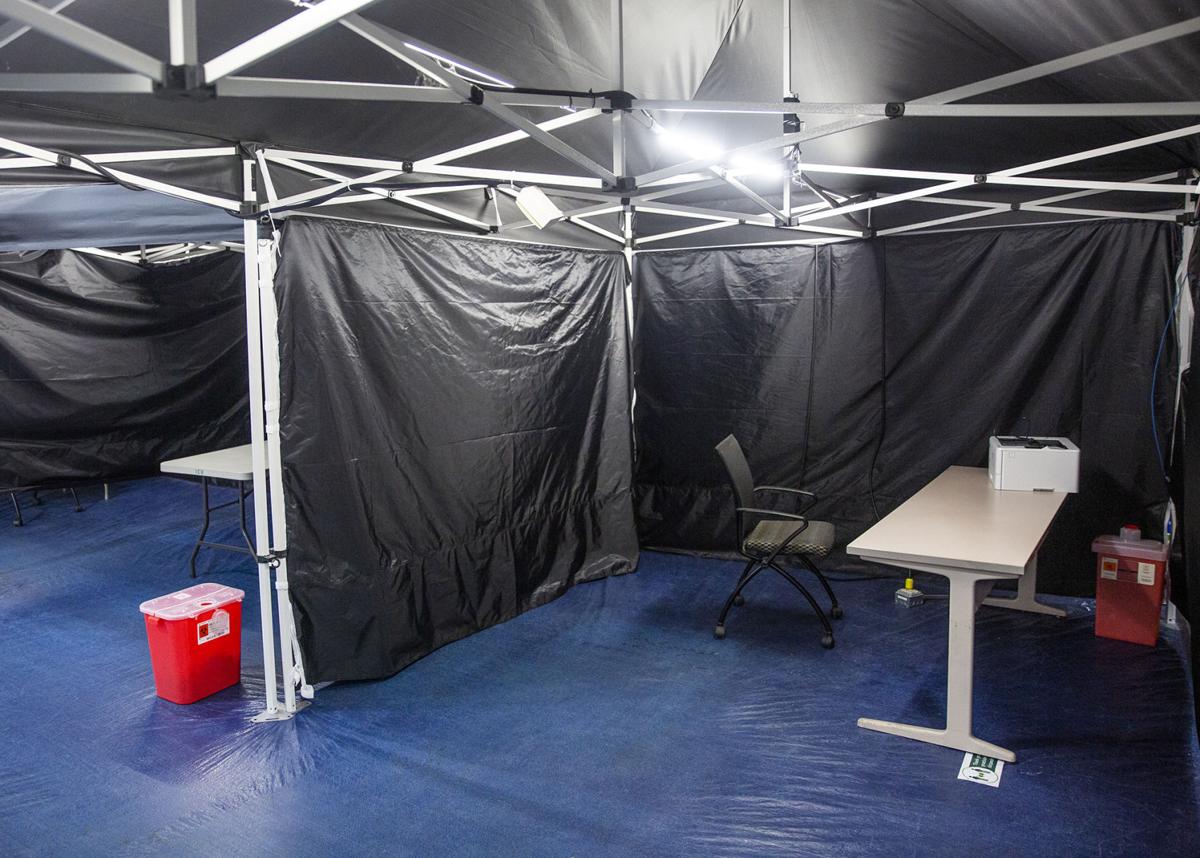 Tents and tables are set up in the hospital’s garage, where emergency COVID patients will be treated. 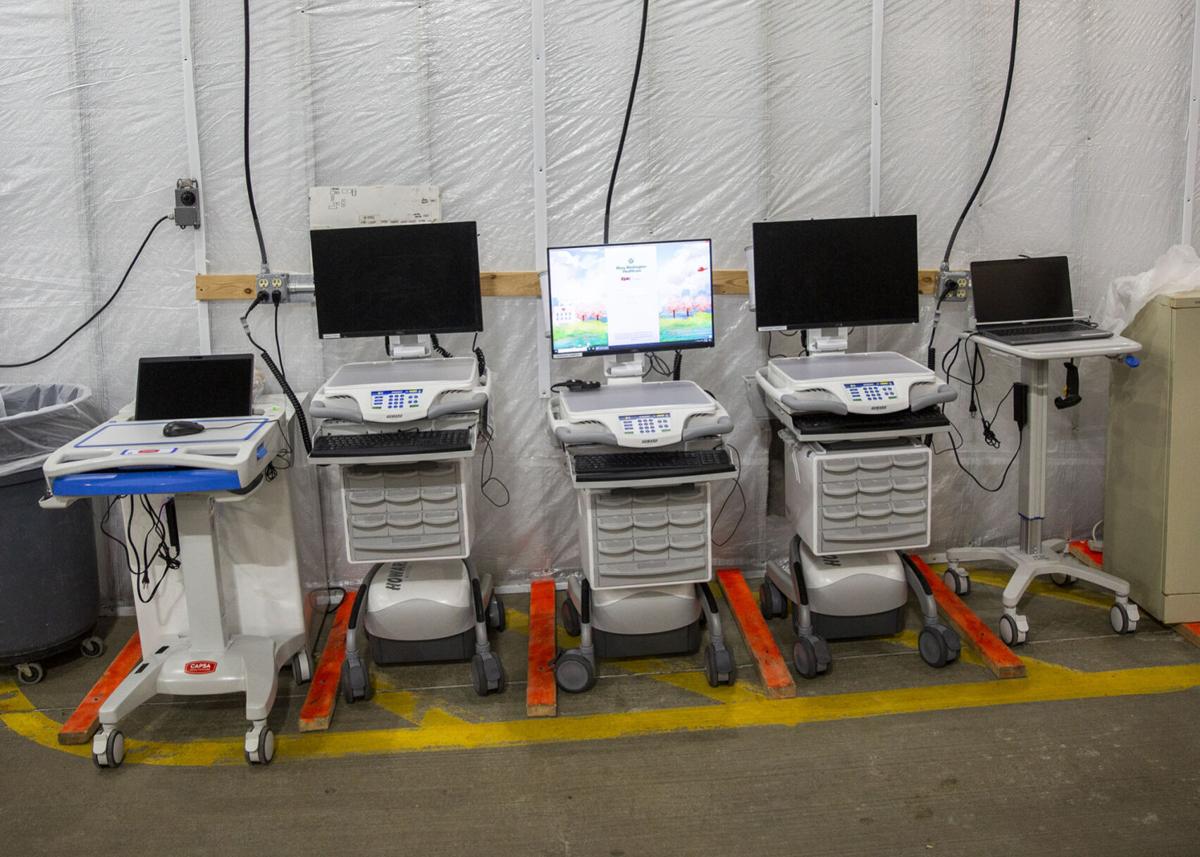 Machines line the wall of the field hospital in the parking garage at Mary Washington Hospital in Fredericksburg on Tuesday, Jan. 11, 2022.

Jerrianne Sheffield’s mother-in-law recently sat in an emergency room for 26 hours, waiting to be seen as she struggled to breathe.

She’d been brought to Mary Washington Hospital on a fire truck because no ambulances were available. As the older woman, who’s 78, waited with her husband—and the two did not want to be named—the couple saw dozens of elderly people around them. Even though the husband is 81 and has his own health problems, he helped other men with mobility issues get to the bathroom because no attendants were available, Sheffield said.

After a person sitting near her in-laws threw up on the floor, another person in the waiting room took a blanket, covered the vomit and pushed it aside where it sat for hours, she said.

Sheffield shared the story, not in an attempt to bash the local hospital, but to bring attention to the dire situation currently in place. Hospitals across the region, state and nation are buckling under the pressure of overwhelming numbers of COVID-19 patients.

“We certainly didn’t understand the severity that they were experiencing,” said Sheffield, who lives in Fredericksburg. “I guess it’s just hard for us to imagine that this could happen. You just don’t expect that in the United States.”

Hospitals in the area, state and nation are seeing more patients this week than at any time during the pandemic. On Monday, Virginia Gov. Ralph Northam issued a temporary emergency order to address the crisis, including a provision that allows hospitals to add more beds than their licenses permit.

As a result, Mary Washington Healthcare has shifted into its “crisis standard of care,” Dr. Christopher Newman wrote on Monday in an update to staff. The health care system also is activating a backup plan officials never wanted to have to implement.

Newman said Mary Washington Healthcare has more patients in critical and intensive care units than beds for them. The remainder of hospital rooms are nearing 100 percent capacity, he said.

In response to the “unprecedented surge,” MWHC is placing patients in other areas, including a field hospital set up in Mary Washington Hospital’s parking garage. When the concept was first announced in spring 2020, MWHC officials stressed they hoped they’d never have so many virus patients that they’d need a field hospital to accommodate them.

After getting through the first few surges of virus cases, MWHC decided to use the space in the parking garage as an infusion clinic for patients getting monoclonal antibodies treatments. Then it was discovered that the infusions that worked so well to prevent serious cases among those with delta and other variants weren’t effective against the fast-spreading omicron. State and federal officials advised hospitals to switch to a different brand—of which there’s a limited supply.

A few patients will continue to get infusion treatments in the field hospital, but its primary purpose, probably starting Wednesday, will switch to being an overflow area for emergency patients with COVID symptoms. Eight to 12 treatment bays with recliner chairs were being set up Tuesday, designed for those with mild to moderate virus cases, said Lisa Henry, MWHC’s associate vice president of communications.

Stretchers will be on standby if any patient needs to be brought back to the emergency department.

The governor’s order didn’t provide any more workers for nursing homes and hospitals where staff shortages that existed before the pandemic have only been worsened by it.

But it did “give us more latitude in adjusting our staffing to the areas of greatest need,” Henry said. For instance, hospitals can move nurses from a step-down medical unit to a critical care unit even though they’re not certified to provide the care.

“Professional licensing standards are quite strict for a reason,” Henry said, but “under crisis standards of care, we have to use an all-hands-on deck mentality.”

MWHC also established a 12-member incident command team to regularly review patient counts and their impact on operations. In a memo to staff on Friday, Newman wanted to be sure associates and medical staff grasped the “seriousness of our current situation.”

At that time, MWHC hospitals were averaging 125 COVID-19 patients a day—a total that climbed to 176 patients on Monday—along with “maxed inpatient beds, record numbers of emergency department patients, growing numbers of associates and medical staff with positive COVID-19, staffing crisis and low booster rates in our community,” Newman wrote in the memo. “We have a responsibility to prepare for the worst case scenarios and head them off whenever possible.”

In another unusual twist of the pandemic, all local hospitals are on EMS diversion, said Kevin Dillard, president of the board of directors for the Rappahannock Emergency Medical Services Council, which oversees such matters. He’s served on the council’s board since 1988 and does not remember that ever happening.

When Mary Washington Healthcare announced it had to go on EMS diversion as well, the action was like hitting a reset button, Dillard said. The dispatch policy went back to normal in terms of first responders taking patients to the hospitals closest to them.

Sheffield’s in-laws were in Mary Washington’s emergency room around the time when patient counts were among the highest. Hearing about so many older people having to wait in uncomfortable and stressful situations was heartbreaking, she said, but she hoped sharing their story would help others understand the dire conditions.

“When the hospital puts out these statements about how they’re in crisis mode, I don’t think people are thinking they could be in that ER waiting from for 24 hours-plus. You think if you come in by ambulance, you’re going to get care early. Well, no.”

And, it doesn’t help that people are going to emergency rooms for COVID-19 tests or “every time they have a little sniffle,” Dillard said.

“People have always gone to the ER who didn’t really need to go to the ER,” he added. “Everybody just dealt with it because we weren’t at capacity.”

That’s not the case anymore, and state agencies including the Virginia Hospital & Healthcare Association and Virginia Department of Health are imploring people to stay away from emergency departments unless they have significant difficulty breathing, intense chest pain, severe weakness or an elevated temperature that persists for days.

Those with mild to moderate symptoms, including a cough, sore throat, runny nose or body aches—or people who want to be tested for the virus—should not go to emergency rooms, the agencies stated in a recent press release.

Bengu Beachley was an ESL teacher at Grace Miller Elementary School in Bealeton since 2018.

The Carolinas and Virginia brace for blast of ice, snow

With students and staff back in classrooms after the holidays, COVID-19 case numbers and quarantines have risen markedly during the past two w…

Court records: 67-year-old Leroy Chandler accused of accidentally killing his neighbor and friend, Torri Robinson, while arguing about Trump with her brother; second man shot in the arm.

NORFOLK — Sallie Graham’s mournful cries gripped a Norfolk courtroom Tuesday as a jury heard a recording of the moment she found out that her son, Graham McCormick, had been found dead floating in a Lancaster County creek.

Chairs are set up in Mary Washington Hospital’s garage in Fredericksburg last week. The building will serve as a field hospital to help handle COVID patients.

Recliners in the field hospital await patients with mild to moderate COVID symptoms.

Mary Washington Hospital has used its field hospital as an infusion clinic.

Tents and tables are set up in the hospital’s garage, where emergency COVID patients will be treated.

Machines line the wall of the field hospital in the parking garage at Mary Washington Hospital in Fredericksburg on Tuesday, Jan. 11, 2022.