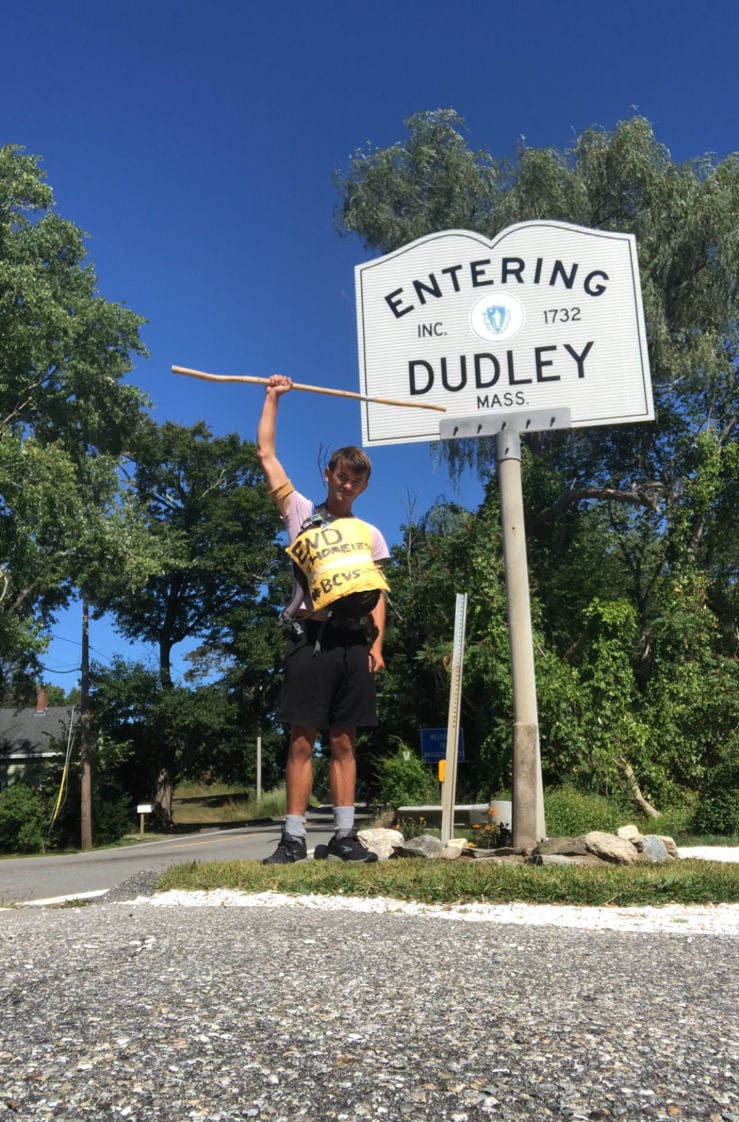 Gordon Wayne poses at the border of Connecticut and Massachusetts on his way to Boston College. 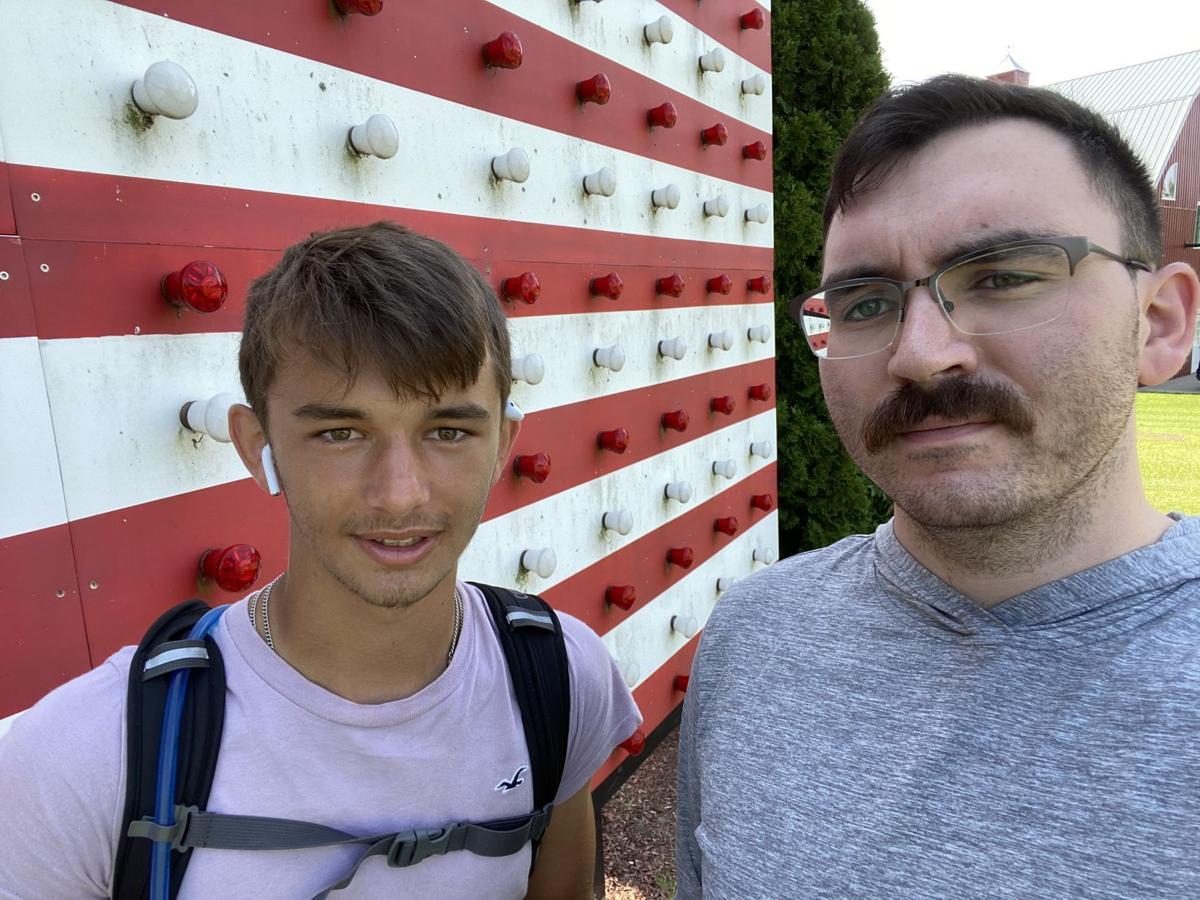 Gordon Wayne (left) poses with Germanna advisor Jordan Hewett, who joined him for a day of walking. 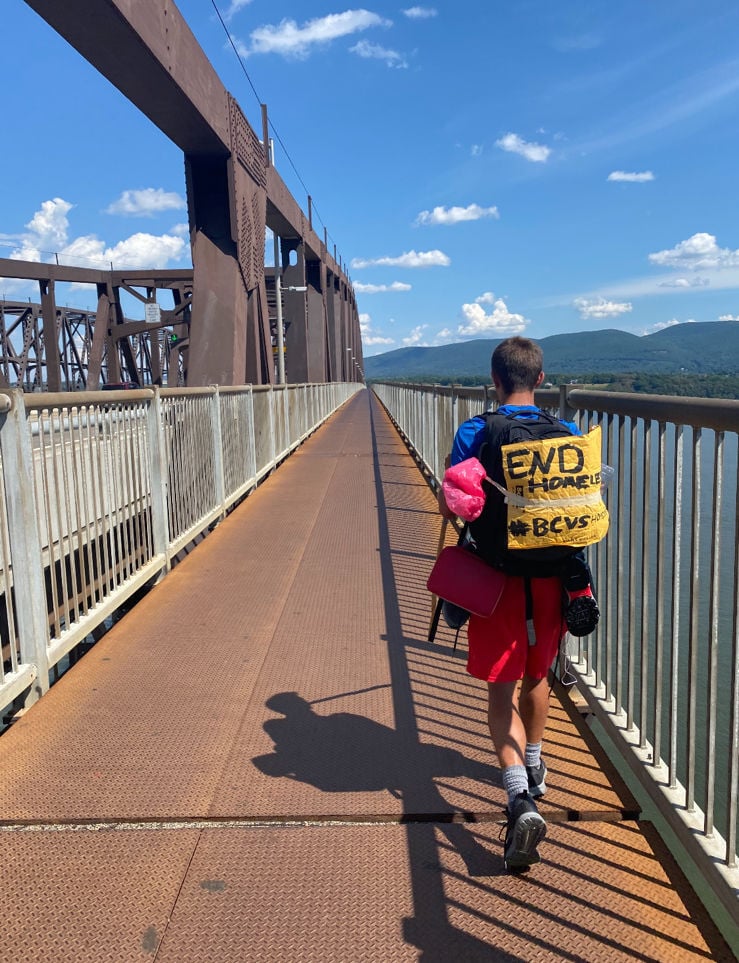 Gordon Wayne is walking from Caroline County to Boston College, where he has a full scholarship, to raise funds to end homelessness.

When classes begin at Boston College this week, it will launch the next leg of an unusual journey for Gordon Wayne.

The one that brought the Caroline High School graduate to Massachusetts was long and difficult. He battled homelessness while attending Germanna Community College, where his outstanding grades earned him a scholarship to the prestigious Ivy League university in Chestnut Hill, Mass.

To get there, and to help others who are enduring similar hardship, Wayne walked the entire 500-plus miles from Virginia.

When Wayne arrived at Boston College late Friday after his 550-mile journey, “they had a reception with a police escort and everything,” the surprised trekker said on Saturday. “It was cool.”

Wayne left Caroline, where he graduated in 2019, earlier in August and completed his journey Friday. He documented the trip on his Instagram account with the hashtag #bcvshomelessness and he asks that those who follow him make a contribution to his GoFundMe to benefit the National Alliance to End Homelessness. So far, he’s raised nearly $14,000.

“I wanted to bring attention to homelessness and all the problems that are created for people who are homeless,” Wayne said. “I feel like it’s not talked about much. It’s really just ignored. The people are dehumanized.”

Wayne can speak from experience. The summer after he graduated from high school—with a 4.4 GPA—he became displaced from his home. He moved in with a friend and saved up some money to buy a car to live in.

After that purchase, Wayne had only $6 left. He had been enrolled in the University of Pittsburgh, but he couldn’t save up enough money for gas to get him there.

After six weeks of working 10- or 12-hour shifts at Kings Dominion, using receipts to get one free meal daily at McDonald’s and sleeping in his car, Wayne realized education was the only way to escape the cycle.

“I feel like people generally think that homeless people are lazy or need a job, but a lot of the times you don’t even really have the chance to advance your position in life,” he said. “You have no real opportunity to do much of anything. You’re stuck and you have nowhere to go.”

Wayne enrolled in Germanna, with the goal of transferring to a four-year college where he could live in a dorm. He went to see his advisor, Jordan Hewett, to obtain permission to take an accelerated schedule, starting with 18 credits.

Hewett was reluctant, until he learned about Wayne’s situation. He helped Wayne apply for federal financial aid as an independent student, meaning Wayne could apply using only his own financial information.

While working and sleeping two hours a night in his car in “random parking lots” and making use of Germanna’s food bank, Wayne finished his first semester at the community college with straight A’s.

The next semester, he took 21 credits and maintained his high average. He applied to transfer to Boston College and was among the 8 percent of applicants who were admitted. He was also offered a full scholarship.

Hewett said Boston College offered to fly Wayne to campus, but Wayne wanted to walk to raise money for others in his situation.

“It’s a personal pilgrimage for Gordon from a place where things were hard to a new start,” Hewett said.

Wayne said he saved up money from his winter job as a pizza delivery driver for the trip. He walked an average of 36 miles each day and spent most nights in hotels along the way.

He started with two pairs of shoes but left one pair in a hotel room because it was weighing him down. He carried all his belongings in a 50-pound backpack. His earbuds broke early on, so he walked along to the sound of his own thoughts and the cars that continually passed him by.

Wayne said the state of his feet—”They are basically destroyed. They are not an appealing sight,” he said—and cars that passed him too closely were the hardest parts of the journey.

“These cars are less than a foot away from me sometimes,” he said. “A few times, they’ve acted like they are going to swerve into me.”

But the best part is the money he raised for his cause, and the support he received from strangers along the way.

Sometimes, people joined him to walk. Hewett joined him last weekend for a leg of his trip in New York state and carried his backpack for him.

“It was a surreal experience,” Hewett said.

Another time, in Pennsylvania, two strangers brought Wayne food, paid for his hotel room and contacted the local news station to help raise awareness for his cause.

“That’s been what’s really helped me keep going,” Wayne said. “Obviously, sometimes I’ve been like, screw this, let me hop on a bus. But I always try to remember what I’m doing this for and the people who are inspired by what I’m doing. And I just have to keep going.”

He said he has on-campus housing, and the school still plans to reopen in person for the fall semester.

He told a Boston TV station: “I was homeless,and this is basically my escape out of it. I won’t have to worry about having a home as long as I succeed here.”

Asked earlier what he would do if Boston College is forced to close its campus due to the COVID-19 pandemic, Wayne said, “Things will work out. They always do.”

“The Germanna Educational Foundation’s donors and our counseling and advising professionals use substantial resources—financially and otherwise—to assist students with needs like Gordon’s,” she said. “Community support of these resources is sorely needed. Together, we all walk with him toward a bright future.”

Gordon Wayne poses at the border of Connecticut and Massachusetts on his way to Boston College.

Gordon Wayne (left) poses with Germanna advisor Jordan Hewett, who joined him for a day of walking.

Gordon Wayne is walking from Caroline County to Boston College, where he has a full scholarship, to raise funds to end homelessness.