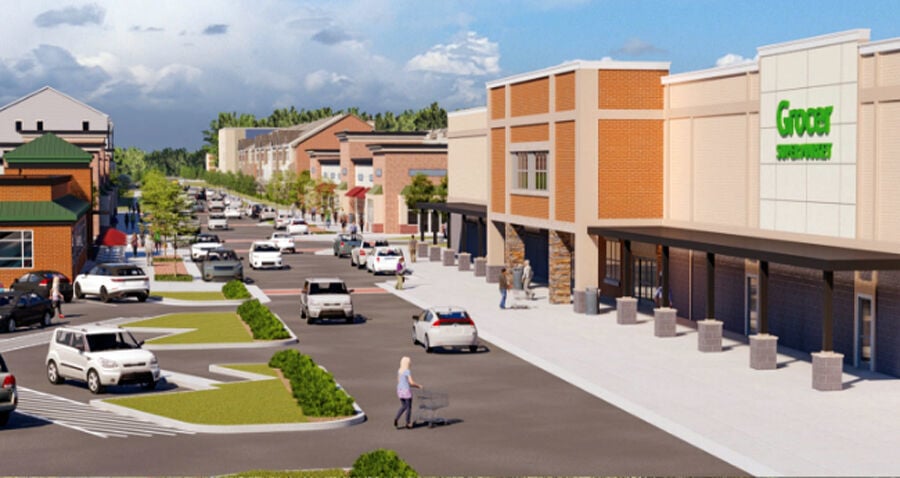 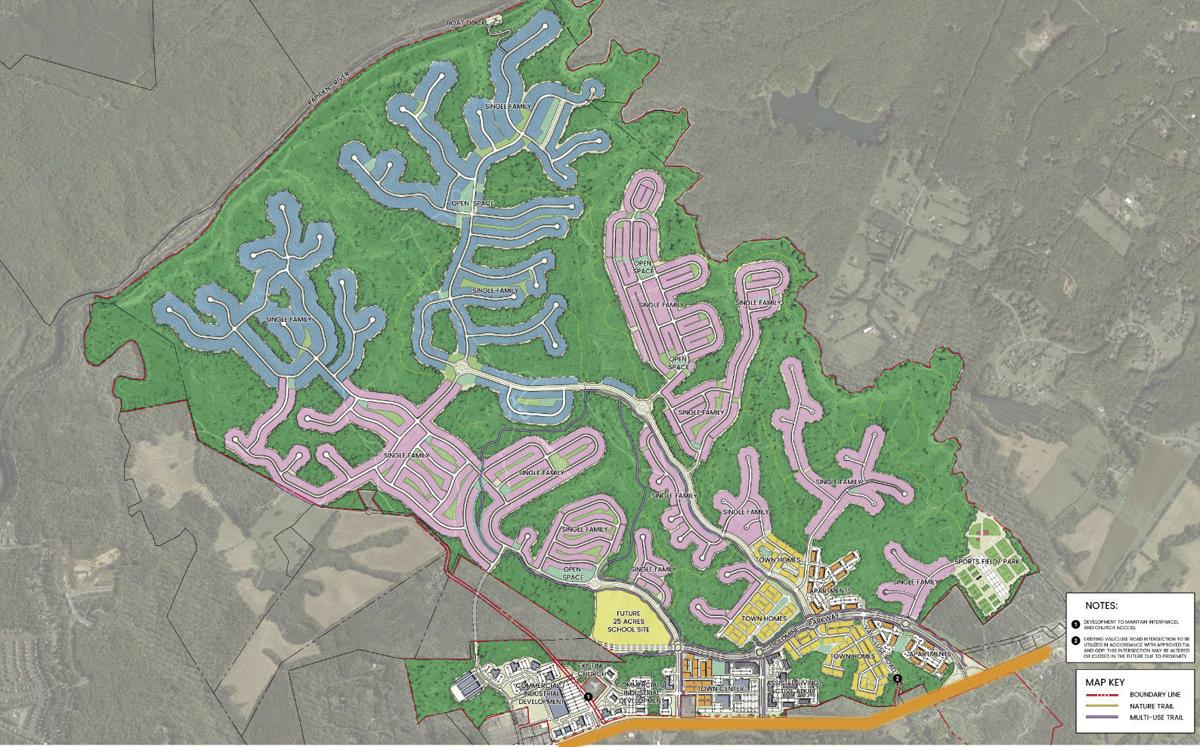 The proposed Wilderness Crossing mixed-use development on State Route 3 (Orange County line at bottom). The 2,618-acre project in eastern Orange would have 4,750 dwellings, with commercial sites near Route 3.

Anyone who knows anything about Orange County’s history knows there were gold mines in Locust Grove.

In “Remembering: A history of Orange County Virginia,” Orange County author Frank Walker Jr. chronicles more than a dozen local mines, most between State Route 3 and the Rapidan River.

Those mines, most dormant more than 150 years, became Topic A at the Orange County Planning Commission meeting earlier this month during a discussion on the 2,168-acre Wilderness Crossing development proposed between Route 3 and the Rapidan.

District 1 Commissioner Jason Capelle found a number of sources that raised concerns about residual impacts from multiple mines in eastern Orange, and on the development site. His sources included the state Department of Mines, Minerals and Energy (now the Virginia Department of Energy), the Department of Environmental Quality and the Piedmont Environmental Council, among others.

Mercury from mining operations isn’t the only issue of concern, he noted.

“There are actually open mine shafts on this property,” Capelle continued.

“This is DMMEs language, this isn’t mine: Safety hazards exist due to the existence of vertical shafts and pits, environmental harms severe due to mercury contamination of the stream sediments, investigate inclusion in the Superfund cleanup. So that’s the Vaucluse Mine. They recommended to be investigated for inclusion in the Superfund cleanup,” he told the commission, noting that Vaucluse Mine is in the center of the proposed rezoning.

The Wilderness Crossing rezoning application was filed by KEG Associates III (represented by local businessman Kenny Dotson and attorney Charles B. Payne Jr.) in March and requested to have the 20 parcels that make up the property rezoned from a mix of Agricultural, Residential, Commercial and Industrial to Planned Development—Mixed Use (PMD). The total timeframe for the project is approximately 30 years and would be broken up into phases. It would include no more than 4,750 residential units (multi-family, single family, townhomes, condominiums, and/or active adult units), as well as a range of commercial retail, financial institutions, offices, hotel, medical or assisted living facilities and/or light industrial construction.

With an otherwise light agenda at its Nov. 4 meeting, the commission added the proposed mixed-use development to its agenda at the request of Capelle.

“There are basically five mine sites that are on this particular property,” he said, sharing topographical maps and various reports with the commission. “Melville is one that DMME doesn’t have a record of. Vaucluse is a pretty extensive mine, more gold was mined than anywhere else in the state of Virginia. You’ve got Greenwood, Wilderness, and Woodville, which is actually on both sides of Route 3.”

After outlining the locations of the mines in the area, particularly within the subject property, he then illustrated the waterways and wetlands within the region—a number of which, including the Rapidan River—which are considered impaired, according to the DEQ.

“What that means is, they’ve not met a water standard limit,” he said. “The Rapidan River is impaired because of mercury in fish tissue. It’s above the recommended limit and so that’s about a nine-mile section of the Rapidan.

“That’s important to know because goldmining used mercury. Mercury was used to dissolve basically the gold out of the rock material and then they would heat it and they would vaporize the mercury,” he explained. “The gold, and not the pure form, would come out and they’d recollect the vapor and then reuse the mercury. There really isn’t any naturally occurring mercury in Virginia. So to the extent that there are mercury issues, it’s something that was brought in. So, definitely the Rapidan River here and beyond this is considered impaired because of mercury.”

At that point, early in the discussion, District 3 Commission member and chair Donald Brooks asked what the Rapidan Service Authority had to say about the river being impaired—since RSA treats water for much of the Route 3 corridor at its plant near the Orange-Culpeper County line?

“RSA treats the water, so they’re able to test it and treat it and I would assume if they find mercury in the water, they probably have a way of treating it,” Capelle responded. “It’s a metal, and there are ways to treat water and get the metal out.”

Capelle said he was surprised there hadn’t been more discussion about the dormant mines in the area, but noted none were located on the highly publicized Walmart site during discussions back in 2011.

Still, he said several mining companies were studying the site and the last permit requested to mine there was dated June of 1988. The county denied the permit, citing public concerns. The site was last actively mined in the late 1930s.

“Back then the county knew that this was an issue and they weren’t going to issue an additional mining permit,” he noted.

Citing source documents, he told the commission the Vaucluse Mineshaft was 220 feet deep with levels at 50 feet, 110 feet and 201 feet. The 110-foot level contained 275 feet of workings.

“That’s basically horizontal underneath the ground. There’s 275 feet of shafts at the 110-foot level. At the 201 foot level, it had 876 feet of drifts and cross cuts. So that’s almost 1,000 feet of horizontal shafts underneath the ground. It goes on to say unsafe conditions exist and are severe due to the extent of the shaft and workings. Mercury is a hazardous waste found at the site.”

He cited high potential mercury contamination at the Greenwood Mine site, and fatal fall hazards at the Wilderness Mine due to the influx of population in the area and existing, underground mine shafts.

“The interesting thing about Greenwood is that houses appear to be on wells there presently,” he said.

Having presented his findings, he then posed a number of questions for fellow commission members to consider.

“Could dust created during construction being contaminated with mercury?

“Should horizontal shaft stress subsistence be a concern during construction activities? If you’re running heavy equipment over these horizontal shafts, I mean, is that something that should be of concern?

“If you build a house over these shafts, over time, is there some issue?

“Is there an issue with the mercury and the high acidic levels and having homes nearby?

“And then the final one is, what about the open space?”

Brooks suggested the commission direct Capelle’s information and inquiries to both county staff and the applicants.

“Let’s see if we can get some answers,” Brooks said, suggesting the commission might benefit from a representative from the Virginia Department of Energy attending an upcoming planning commission meeting. “I’m just saying let’s get some expertise in here.”

District 2 Commission member George Yancey recommended as soon as possible that Capelle’s information and questions also be forwarded to the board of supervisors, which ultimately will decide whether or not to approve or deny the rezoning application.

“I’m curious. I know the landowners are aware of the mines, but are they aware of the records? Who’s responsible for the cleanup? That’s a question that you know that it’s hard to answer. Is it federal, state, the county or the landowner? he asked. “Has the landowner already considered some mitigation? Maybe they have. The last thing I’ll say is, I’ve been in contact with DEQ. They have some concerns. DMME has concerns. There are state grant funds available to try to deal with this mine stuff. I also think that independent of this development, this is something that is potentially impairing the Rapidan. Presently, there are wells in the area and even independent of this development, it’s something that might warrant a little more investigation.”

District 4 Commission member Julie Zeijlmaker appreciated Capelle’s research and noted that the mine question had come up during the applicants’ town hall meeting with the public at Locust Grove Middle School in June.

“People asked that question and may not really have gotten an answer,” she said. “Opening this up for discussion is a really good thing. I think people are concerned about mercury in the water.”

Zeijlmaker said one citizen stood up at the town hall meeting and specifically asked about environmental studies on the proposed project site.

“What was the response?” Capelle asked. “What did the presenters say?”

“I think they said they heard them. I think they were listening. I don’t know if there was really a response,” she said.

“There was no, ‘we looked at it, we solved it, we dealt with it,’ ” District 5 Commission member Bryan Nicol added.

Gillespie said there was some comment about groundwater contamination, but the applicants’ response was they were not planning to use groundwater for irrigation or potable water.

Nicol also asked if the project application included acknowledgment or mitigation for the mines on site?

Gillespie said in his recollection, the application did not include a mention of the historical use of mines on the property, was not highlighted or featured part of the application, nor identified as an issue of concern with proposed mitigation or remediation measures.

A look at the proposed development map includes names such as “Goldmine Parkway,” a proposed interior access road connecting to existing Vaucluse Road that would parallel Route 3, as well as proposed neighborhood areas labeled “Goldmine Preserve” and “Goldmine Central.”

Nicol also noted that since the rezoning application includes combining a number of parcels, he felt it would be relevant to identify which parcels correspond with the mentioned mines.

“They said they are combining 20 parcels. What I want to know is which parcels have a mine on them? Is it a 10-acre parcel, a 400-acre parcel?”

“They need to be specific about where the houses are going to be based, or the open space, so that it does not have a relative impact,” Brooks added. “If a parcel has 2,000 feet of underground mines, you’d hopefully not build roads on top of it but make it open space—but that would have to be noted to the public if it’s used for trails, that there’s potential danger there.”

The proposed Wilderness Crossing mixed-use development on State Route 3 (Orange County line at bottom). The 2,618-acre project in eastern Orange would have 4,750 dwellings, with commercial sites near Route 3.