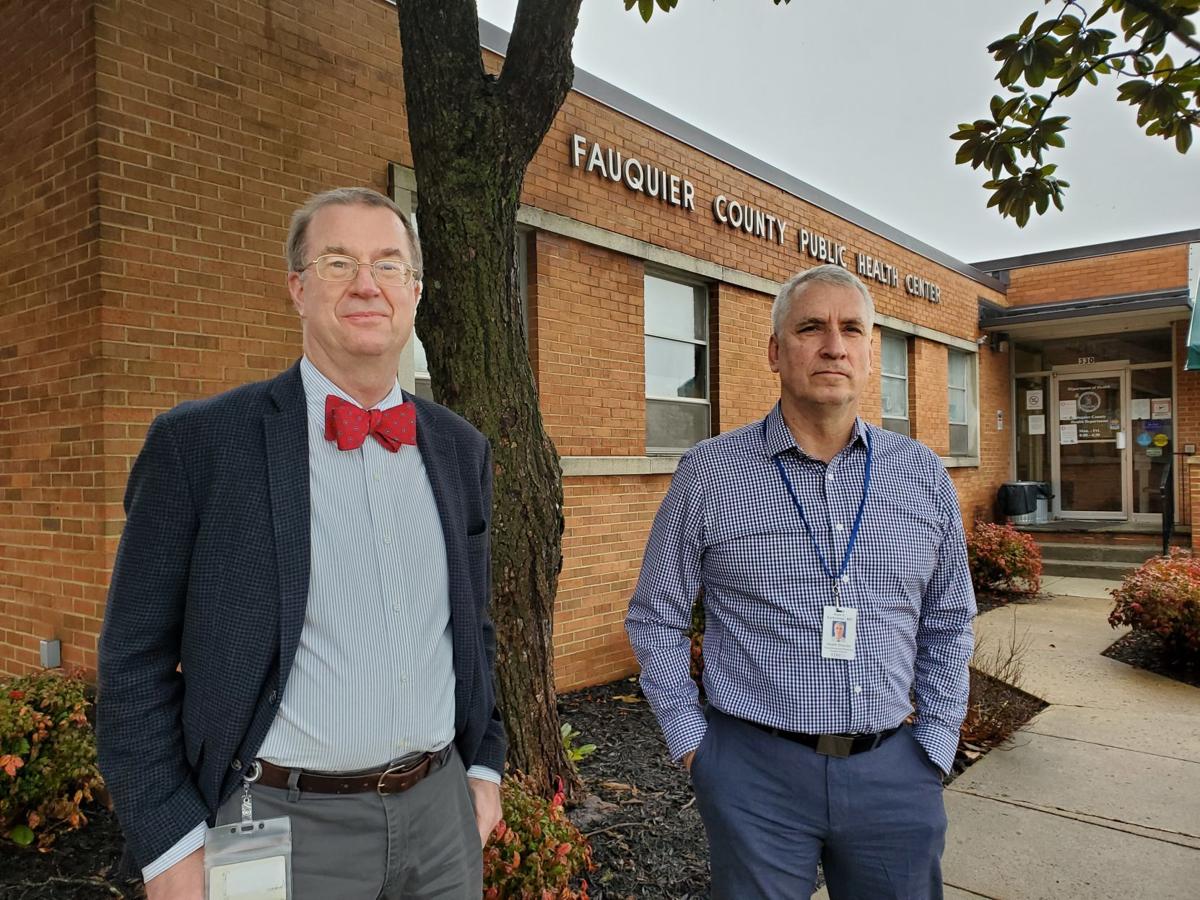 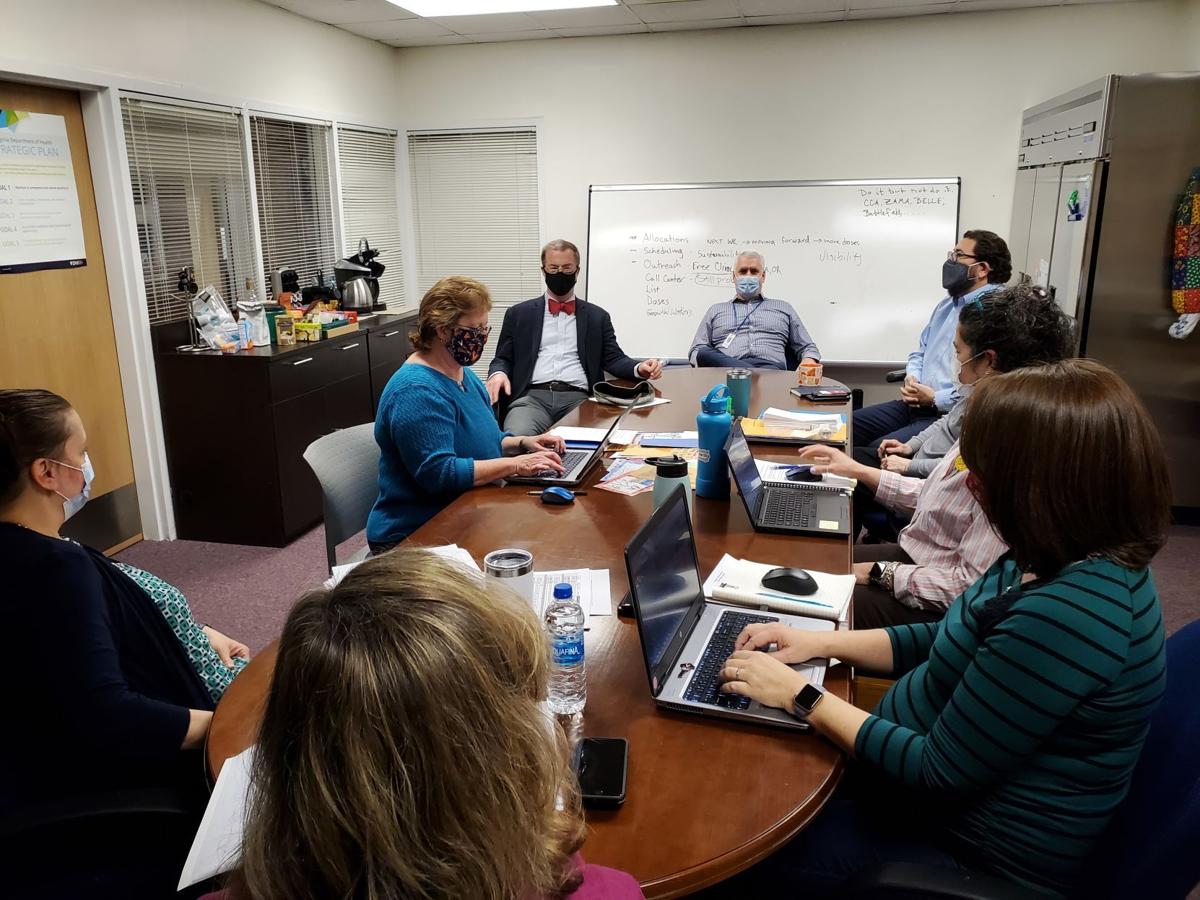 Rappahannock-Rapidan Health District staff members meet Monday in Warrenton with Dr. Colin Greene (center left), their incoming boss, and Dr. Wade Kartchner (center right), who has led the five-county district for the past four years—including the first year of the global COVID-19 pandemic. 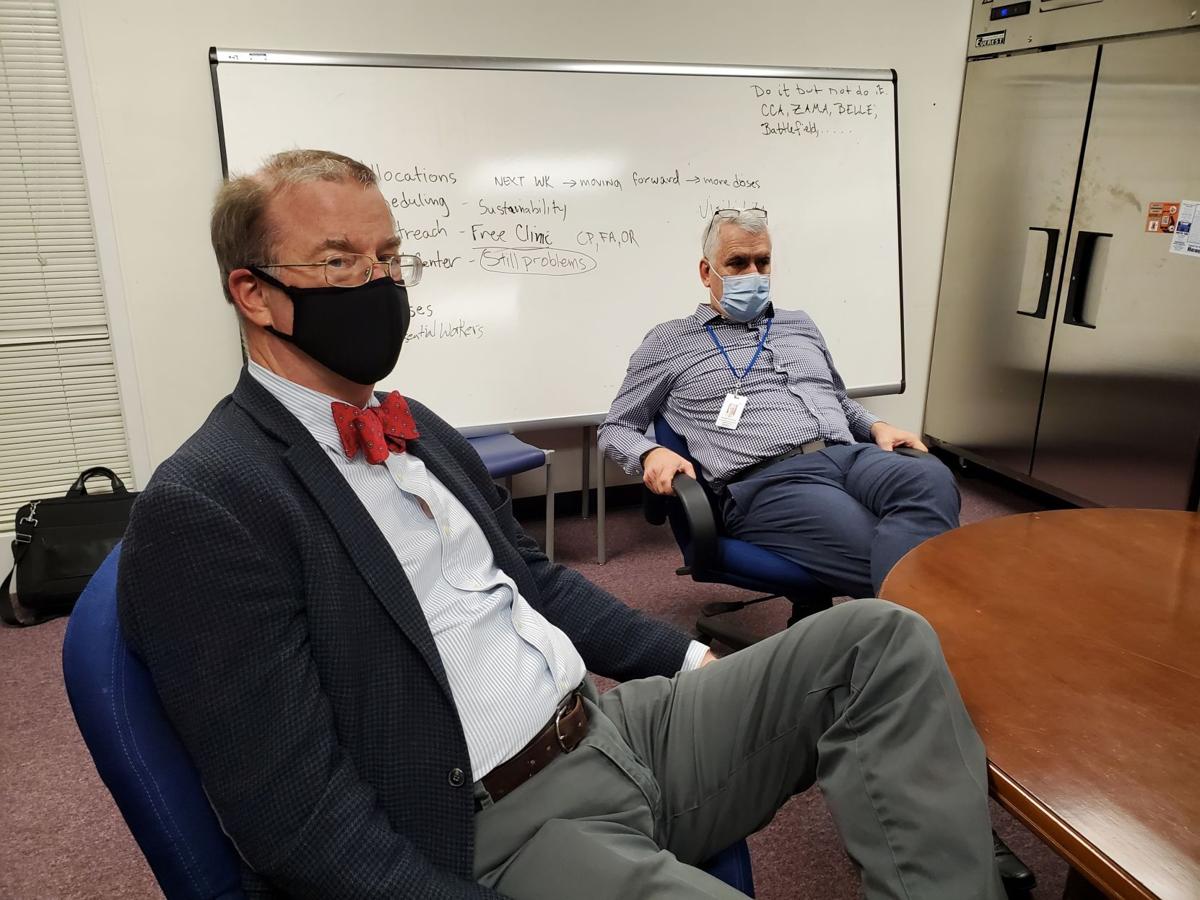 But COVID-19 made it so, giving countless Virginians the jitters, sickening more than 10,000 and killing 132 people in the five-county Rappahannock-Rapidan Health District.

“Like health workers everywhere, we suddenly were trying to address anxiety about what [the virus] is, treatment, contact investigations, mitigation strategies, distancing and masking—all in a framework of political bashing, left and right, up and down,” he recalled. “And we, as public health workers, get caught in the middle of that.”

Kartchner, the district’s director since 2016, said he has seen good, honorable and decent people step up to help out and care for one another as the deadly virus took its toll. But for others, “the stresses of the time and situation can bring out the not so good in people,” he said.

The district has done quite well as measured by cases per capita and how its people slowed the spread of the virus, compared to neighboring districts as well as health districts throughout the state, Kartchner said.

“This has been a once-in-a-century sort of event for everybody,” he said. “I think there will be a lot of lessons we can take and use and learn from. But we don’t have the final tally on what those all might be, because I don’t think the story is yet written or finished.”

Virginia’s vaccination registration system is still not working well, with “glitches and hiccups” as local data is transferred into it, Kartchner said.

The district’s health system has continued to move forward with nearly 1,000 vaccinations now being given per day, he said. Workers maintain the vaccination data manually, then enter it into the state system after vaccine clinics, Kartchner said.

“We’ll just keep plugging away, and eventually it will all come together,” he said.

Kartchner said he hardly expected to be thrust into the limelight during the last of his four years leading the district, which serves 180,000 residents. But everything changed when the novel coronavirus jumped from wild animals to humans and arrived in the United States.

“This is really the first time a spotlight has been shown on public health,” he said. “And I would venture to say most health officials are normally perfectly comfortable having most people not know who they are. This public scrutiny has not been easy for me and my colleagues.”

He explained most normal health district work is pretty straightforward, with strategies geared toward general and family health, immunizations and schools, always looking for new methods to combat drug abuse and other community health issues.

“Our people generally work hard, but are used to blending into the woodwork,” he said.

On Friday, Kartchner—who has become a familiar face to many in the region’s governmental response to the COVID-19 health crisis—will retire at age 60. That will leave the health district without a permanent leader for the near future.

The physician, who earned his degree in public health at the University of Massachusetts–Amherst, called the team serving this region “the finest group of public health professionals I have known.”

Formerly a pediatrician and private health consultant who began his medical career as a doctor in the Air Force, Kartchner served for nine years as public health director in Navajo County in northeastern Arizona, which includes the Navajo Nation and the Hopi and Fort Apache reservations.

Geographically, the two districts are similar in size and demography, the two physicians said, although RRHD is a bit more diverse, with a slightly smaller population.

Historically, the Rappahannock-Rapidan Health District has had difficulty retaining a permanent director, as happens with many rural health districts in Virginia, Kartchner said. Fewer physicians are attracted to those areas.

“I guess with its more rural location, kind of in-between the D.C. area, Charlottesville and Fredericksburg—all areas with more amenities, universities—maybe it’s hard to compete with that,” Kartchner said, although he added he and his wife have loved it here and intend to continue living in the area.

It isn’t unusual for the director of one health district to oversee another district temporarily, Kartchner said. And he said he could think of two Virginia districts that have been led on a semi-permanent basis, for years.

“The number of districts needing a health director might be slightly more acute than normal, but not by much,” he said.

On Monday, Greene, 62, visited the Rappahannock-Rapidan Health District’s Warrenton office near Fauquier Hospital to meet its staff, gather information and get acquainted.

An Army veteran, Greene has led the neighboring health district—which serves the city of Winchester and the counties of Clarke, Frederick, Page, Shenandoah and Warren—since July 2017.

Greene grew up on Long Island and central Florida, graduating from Johns Hopkins University and Temple University. He trained in family medicine in Lynchburg, finishing in 1987, and spent 30 years as a physician in the Army.

“One particularly relevant piece of experience is I worked as command interim at Walter Reed Hospital studying the Zika virus,” said Greene, who lives in Winchester. “So I feel like I already have a foundation in virus work that has informed much of my approach.”

Greene has been married to his wife, Kate, for 34 years. They have three adult children, two of whom live in the Charlottesville area, with one in Oregon.

The Virginia Department of Health has already begun searching to find a physician to permanently lead the Rappahannock-Rapidan Health District, “what we affectionately call Rap-Rap,” he said.

“It may not happen immediately, might take through the summer,” Greene said. “The intent is to hire another director.”

Body found in wrecked car on U.S. 1 in Stafford

A 22-year-old man was found dead in a wrecked vehicle in the 3400 block of Jefferson Davis Highway in Stafford County late Thursday, police said.

City slaying may have happened after argument between couple

Rappahannock-Rapidan Health District staff members meet Monday in Warrenton with Dr. Colin Greene (center left), their incoming boss, and Dr. Wade Kartchner (center right), who has led the five-county district for the past four years—including the first year of the global COVID-19 pandemic.