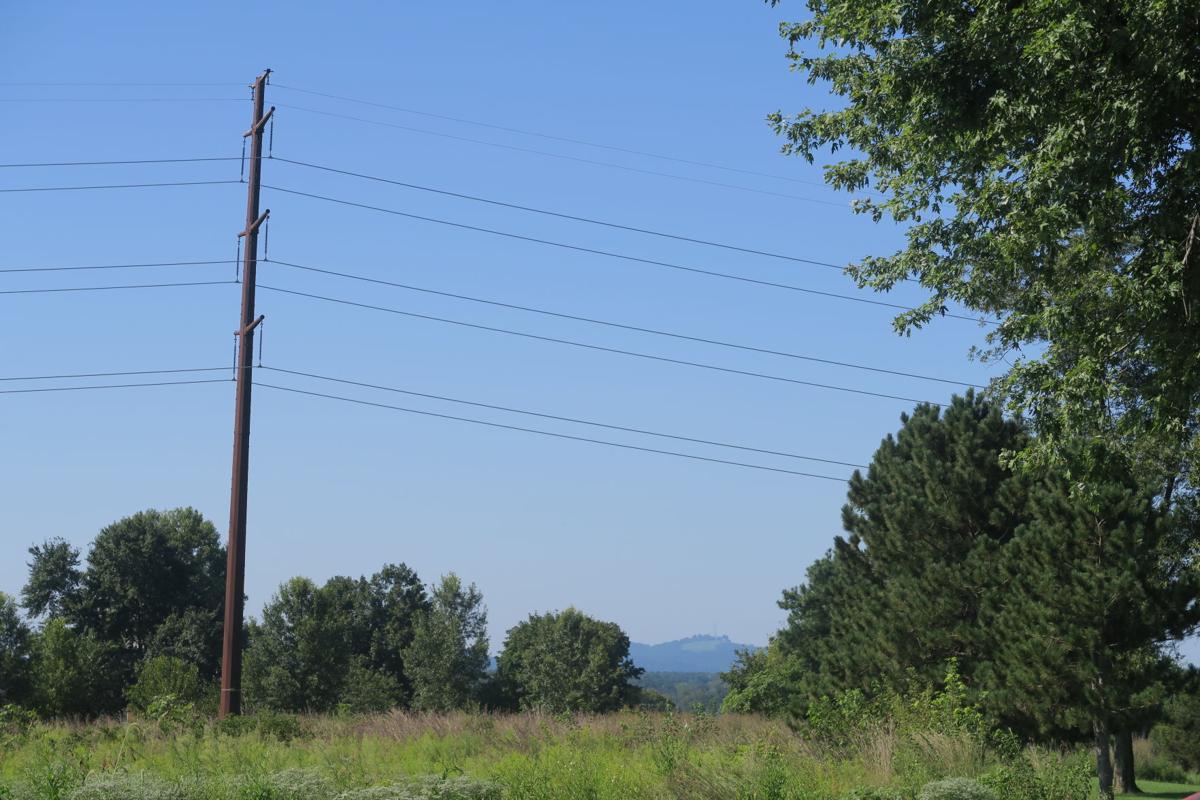 Greenwood NextEra Energy’s solar power plant would be built on farmland along the Dominion Energy line in Culpeper County’s Stevensburg area, as seen here from the historic Rose Hill estate. 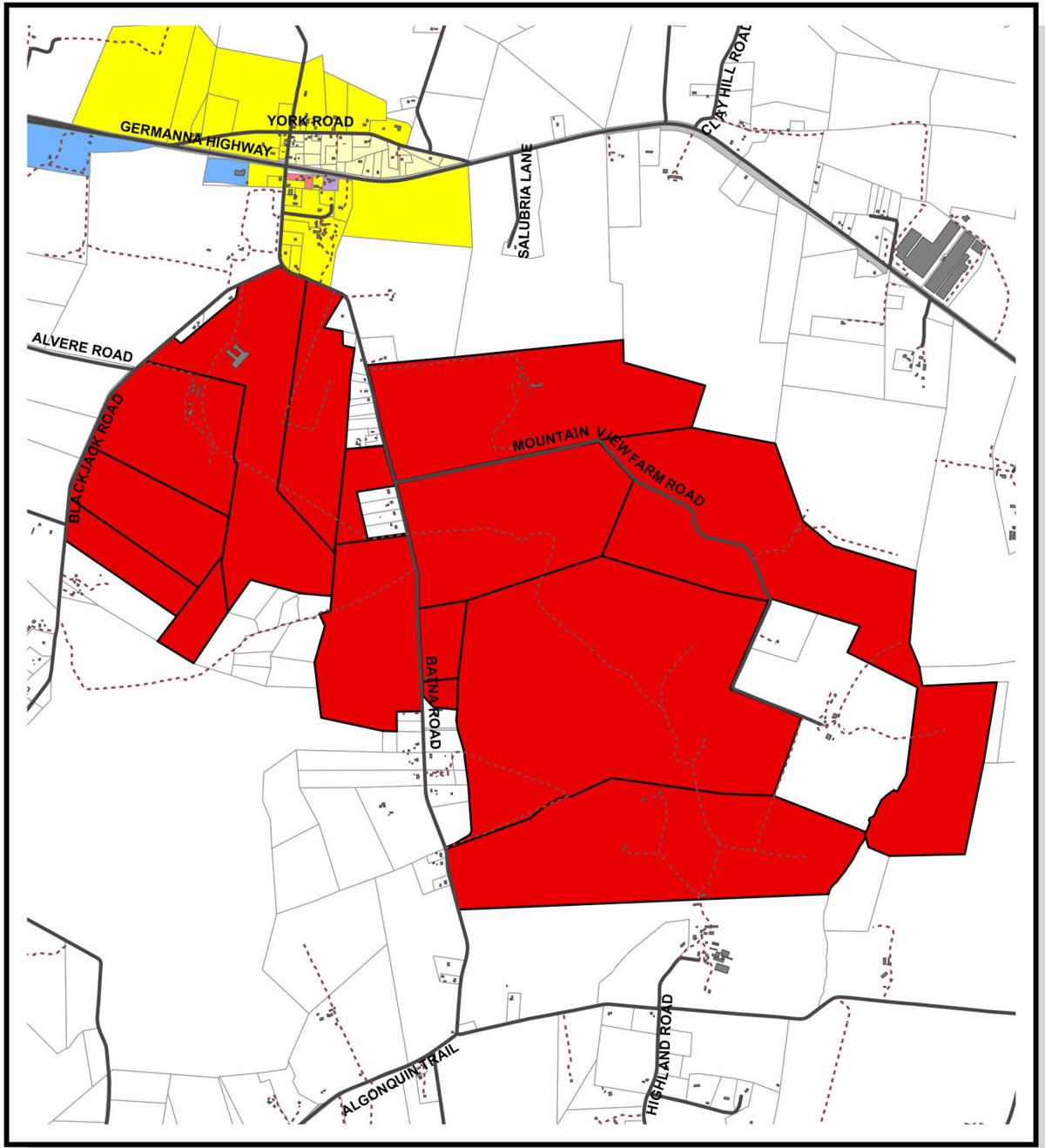 Greenwood NextEra Energy proposes to build a solar power plant near Stevensburg. About 350,000 solar panels would be installed on some 1,000 acres of farmland (shown in red) along Batna and Blackjack roads.

Narrowly approved two years ago by a controversial vote, the conditional-use permit for Greenwood Next Era’s solar plant in Culpeper County expired Friday. The company wants to build its 1,000-acre project on farmland in the Stevensburg area.

Virginia lawyer Thomas C. Kleine, representing Greenwood, last month asked the Culpeper County Board of Supervisors to approve a one-year extension for the power plant. The supervisors’ original permit—granted by a 3-2 vote with two abstentions on Oct. 2, 2018—required that construction would have started by now.

The Greenwood site plan still awaits approval by various state agencies, according to Kleine, in his correspondence with the county requesting the permit extension. Most notable among those approvals is the state Department of Environmental Quality’s approval of the plant’s stormwater management plan. Greenwood’s plan must ensure rainwater runoff is kept on the site, which is less than five miles from the Rapidan River.

Kleine asked that Greenwood’s request for a permit extension be put on the agenda of the Board of Supervisors’ Oct. 6 meeting. But the item is not on the agenda for Tuesday’s meeting. Instead, it is slated for consideration at the board’s Nov. 4 meeting.

The Planning Commission’s consideration of the site plan is suspended until the elected board hears the extension request, County Planning & Zoning Director Sam McLearen said.

Meanwhile, in Richmond, the Virginia General Assembly did not approve a bill proposing, due to the COVID-19 pandemic, a two-year extension of all localities’ land-use approvals.

On Aug. 28, the state Senate approved the bill, which would extend until July, 1, 2022, approval of local conditional-use permits, special-use permits, rezonings and other land-use allowances that were valid as of July 1, 2020. Senate Bill 5106 passed by a 32-4 vote.

Among those voting against it was Sen. Jill Vogel, D-Upperville. She represents District 27, which includes a small part of Culpeper County—including Stevensburg, site of the Greenwood solar project. Vogel did not immediately respond to a request asking about her vote.

On Friday, the Virginia House of Delegates declined to act on the bill.

Del. Nick Freitas, R-Culpeper, has been working with Culpeper resident Susan Ralston, president of Citizens for Responsible Solar, to oppose the legislation.

“It is not so much a question of granting extensions as much as who should grant the extension,” Freitas said in an email Friday. “This should be a decision of the locality, not Richmond, and represents a dangerous precedent.”

“The Virginia legislature should respect the authority of local counties to govern their own affairs,” Ralston, president of Citizens for Responsible Solar, said Friday.

Solar developers and others intended to use the bill “to circumvent local authority and, this time, it didn’t work,” she said.

Two years of residents’ opposition to the Greenwood plant, the Planning Commission’s concerns about the developers’ revised site plan and the Board of Supervisors’ delayed consideration of Greenwood’s extension request “should send a clear message to Greenwood and other solar developers that Culpeper County has concerns over the siting of industrial-scale solar projects on historic rural land,” Ralston added.

The Piedmont Environmental Council also opposes the land-use permit bill. The regional conservation group said homebuilders and commercial developers are pushing the legislation to take advantage of the pandemic for a blanket two-year state extension of building projects.

“This state override of local authority ignores the fact there is already a process for requesting extensions at the local level,” PEC spokesman Marco Sanchez said in an Aug. 28 social-media post.

“Furthermore, we know of no local government that has failed to meet an appropriate request for an extension due to the pandemic,” Sanchez added. “… These decisions are best made at the local level on a case-by-case basis, allowing a locality to reasonably reassess whether that rezoning and development proposal still makes sense for the community.”

The Warrenton-based group was founded in 1972 to promote and protect the Piedmont’s rural economy, natural resources, history and beauty.

On Thursday, Culpeper Board Chairman Gary Deal joined Supervisor Paul Bates and County Administrator John Egertson on a tour, closed to the press, of the Belcher solar plant that Dominion Energy is building on some 1,000 acres along State Route 22 in Louisa County. Louisa supervisors approved the plant in 2017.

Egertson said they viewed a mostly complete section of the project, but were not permitted to leave the vehicle or take photographs. It was an educational visit, he said, with ample opportunity to ask questions.

Deal, the only current supervisor who voted for Greenwood two years ago, said Friday evening that the Louisa property he visited “appeared to be an ideal site for solar.” He said it was “nestled back surrounded by woods with natural screening.”

“Dominion representatives were very good at explaining the details,” he said.

Last month, the Louisa County Board of Supervisors rejected a request to allow two more Dominion solar projects on either side of the Belcher site, The Central Virginian newspaper reported.

The plant sites’ neighbors expressed concern about loss of rural character, truck traffic and runoff into area waterways, as have neighbors of pending solar projects in Culpeper County.

In Culpeper, preservation of Civil War sites is also a consideration among critics of the large, sun-driven power plants that, as in Louisa, would feed a Dominion power line to Northern Virginia and help meet state mandates for clean energy.

Friends of Cedar Mountain Battlefield has asked supervisors and planning commissioners to delay consideration of such projects until the Culpeper nonprofit group completes a federally funded study of the Rapidan Front, a nearby array of nationally significant Civil War sites.

In addition, neighbors sued to stop Greenwood, claiming it will destroy their views, generate excessive glare, decrease property values and create excessive noise and traffic during construction. Courts dismissed their lawsuit, which delayed the project.

Some Stevensburg farmers—on whose land Greenwood’s 350,000 solar panels will be placed—say the renewable energy plant will allow them to keep their farms and be good for the planet.

Given that its permit has expired, the project’s fate is uncertain.

It is also unclear if the General Assembly will pass legislation extending the term of land-use permits.

Culpeper Supervisor Jack Frazier is the only current board member who voted against Greenwood two years ago. Three new members were elected to the board last year.

Chase, the county’s longest-serving supervisor and a former coal miner, supports development of renewable energy sources in Culpeper. He did not vote on the Greenwood project because the plant would include part of his farm.

Rosenberger did not vote because he has a potential business-related conflict of interest with the project.

On Texas visit, Biden warns Iran 'to be careful'

On Texas visit, Biden warns Iran 'to be careful'

Greenwood NextEra Energy’s solar power plant would be built on farmland along the Dominion Energy line in Culpeper County’s Stevensburg area, as seen here from the historic Rose Hill estate.

Greenwood NextEra Energy proposes to build a solar power plant near Stevensburg. About 350,000 solar panels would be installed on some 1,000 acres of farmland (shown in red) along Batna and Blackjack roads.