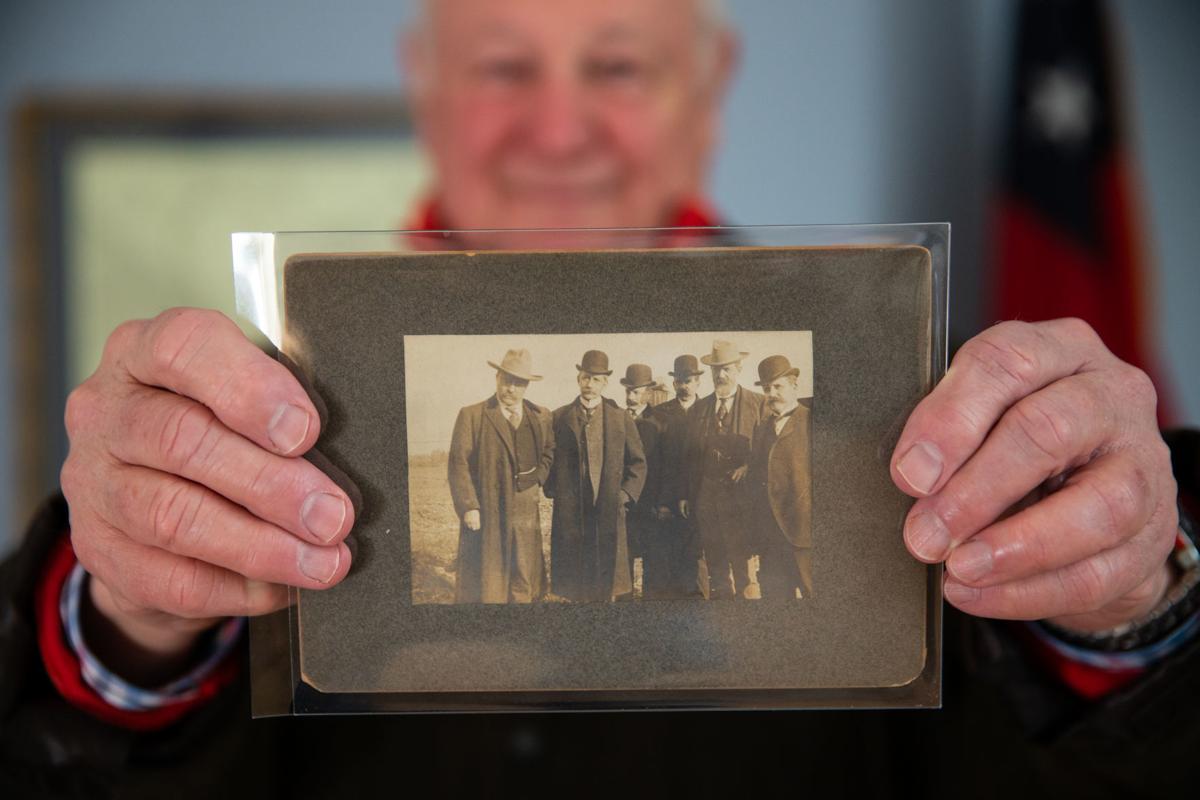 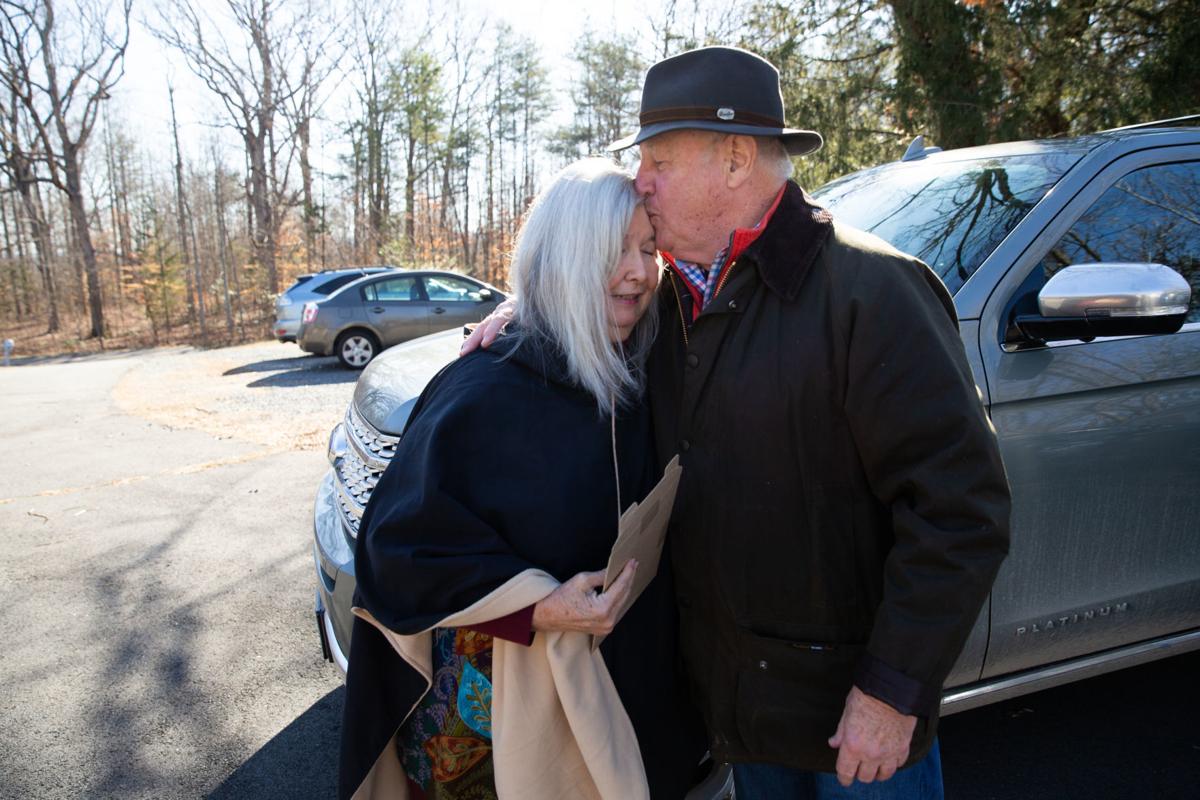 Outside the Friends of Cedar Mountain visitor center, 'Bud' Hall thanks Diane Logan after presenting her with the Theodore Roosevelt photograph. 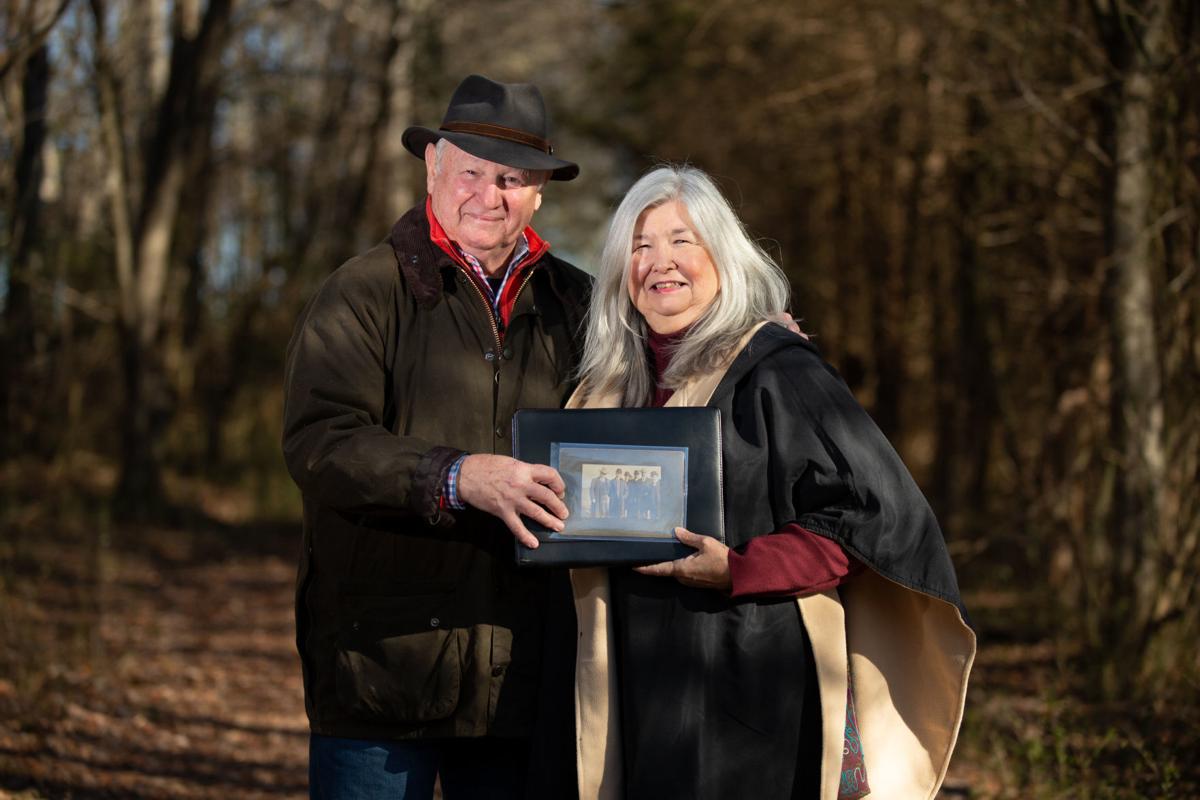 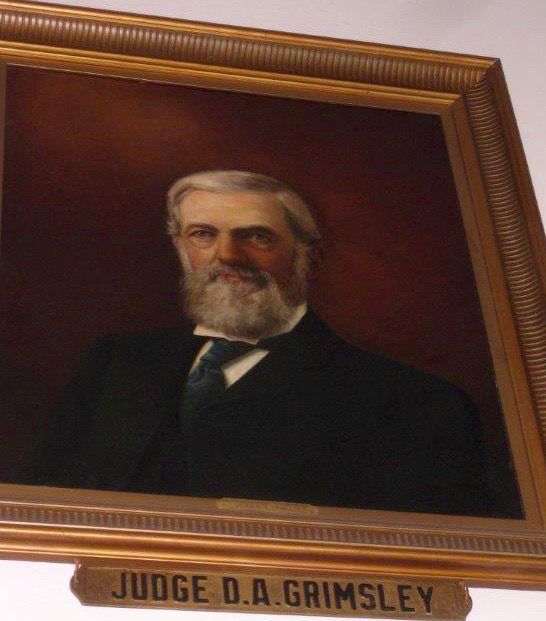 Judge Daniel A. Grimsley’s oil portrait hangs among those of other distinguished jurists in the Culpeper circuit courtroom. A Confederate veteran, Grimsley was President Roosevelt’s guide to the county’s Civil War battlefields. 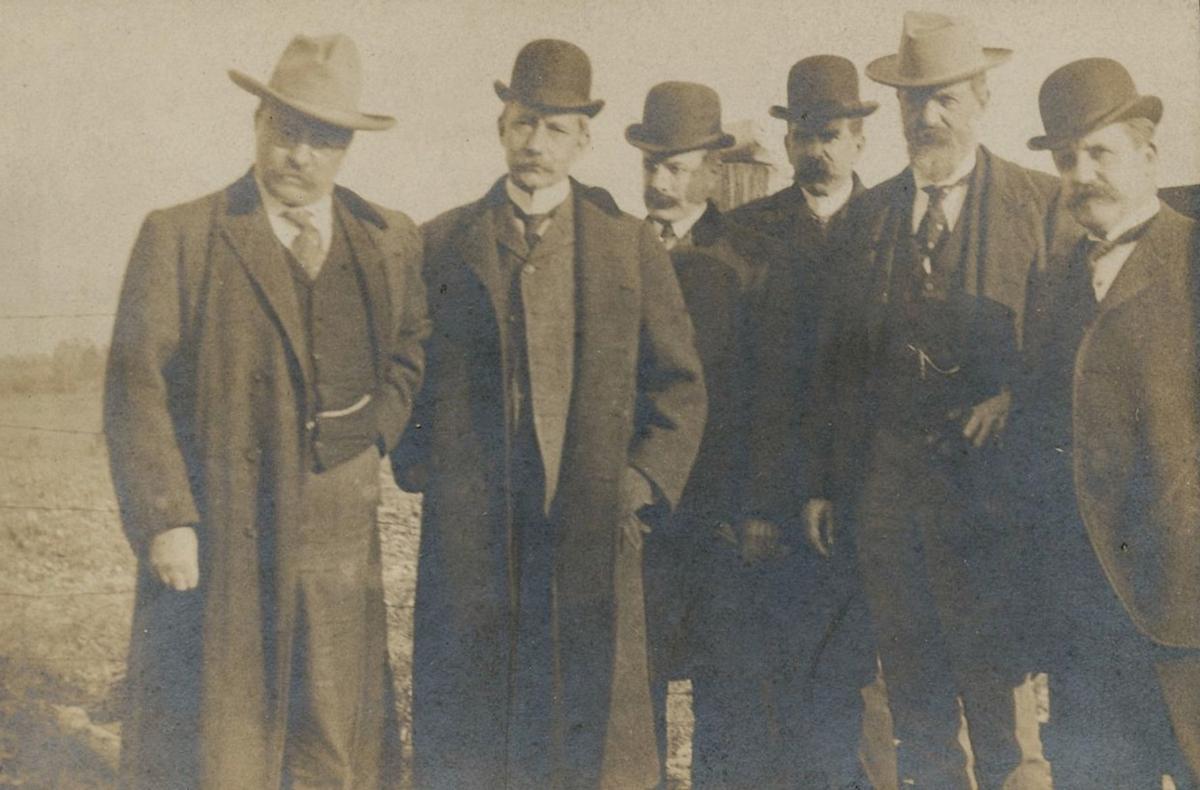 A rare treasure has come home to Culpeper County, finding the perfect repository with an appreciative steward.

An original, silver gelatin photographic print of President Theodore Roosevelt at Cedar Mountain now rests in the care of the local nonprofit group that cares for the preserved portion of the Civil War battlefield.

Local historian Clark B. Hall, the collector who purchased the scarce photo, gave it to the Friends of Cedar Mountain during a recent visit to the hallowed ground, now maintained and interpreted by the group of area residents.

Diane Logan, the group’s president, was delighted by the present. On hearing of it a few days earlier, she had broken into tears.

“Your kindness is not only generous but humbling,” she told Hall later when he visited the battlefield. “We all enjoy an occasional thank you for our efforts, but your heartfelt generosity with this incredible photo is indeed a precious gift.”

Now, the photograph is proudly displayed for public viewing at the Friends of Cedar Mountain Information Center on General Winder Road, Logan said.

The print captures a moment during the 26th president’s two-day, 1902 visit to Culpeper County to tour its two major Civil War battlefields. Roosevelt, 44, had succeeded President William McKinley upon his assassination at the hands of an anarchist just 14 months earlier. He was the youngest man to hold the office.

Eleven years later, Root was awarded the Nobel Peace Prize for working to relief Latin Americans’ fears of an imperialistic United States by arranging peace conferences and trying to resolve conflicts by arbitration. He became the first president of the Carnegie Endowment for International Peace.

The mounting board’s reverse bears a handwritten inscription detailing the identities of the men in the image, the names of the photographer and printer, and where and when it was taken. “View taken on battlefield of Cedar Mountain, VA., Nov. 2, 1902,” the inscription states.

Mrs. Frances Boddie of Birmingham, Ala., exposed the negative. Mrs. G.W. Kellogg of Rochester, N.Y., made the silver gelatin print.

“The older one gets, the more satisfaction one accrues from realizing the ‘little things,’ ” Hall wrote associates a few weeks ago, when he found and acquired the rare print. “For many years, I have searched for an original photograph of President Theodore Roosevelt standing on the Cedar Mountain Battlefield as a result of his Culpeper visit in 1902—and one has just surfaced, now on its way to Culpeper.”

Fredericksburg-area historian Robert K. Krick, author of the 2002 battle history “Stonewall Jackson at Cedar Mountain,” has a copy of the original, which was published in the Star-Exponent’s recent “Greater Culpeper Memories” photo history book.

Grimsley, who saw action with the 6th Virginia Cavalry in many of the conflict’s major engagements, had later served three terms in the Virginia Senate and also served in the state House of Delegates. In 1880, he became a judge of the 6th Judicial Circuit, serving for 24 years.

In his off hours, Grimsley placed regimental markers on the Cedar Mountain battlefield, welcomed visiting veterans back to blood-soaked ground in Culpeper, and arranged for Northern states to place monuments to their fallen soldiers at Culpeper National Cemetery. He wrote the book “Battles in Culpeper County, Virginia, 1861-1865.”

“Judge Grimsley not only chronicled—more than anybody—Culpeper’s vital role in the war, but he became an important symbol of national reconciliation,” Hall has written. “It was Judge Grimsley who organized reunions and speeches that urged former Confederate soldiers to set aside the war’s divisiveness, and to embrace, via joint reunions, their former enemy. This was a great man.”

Arriving in Culpeper early on Sunday, Nov. 2, via special train with Cabinet members Elihu Root and George Cortelyou, Roosevelt was met at the railroad depot by Grimsley.

The president attended services at Culpeper Baptist Church and dined at the fine home of treasurer Smith, a columned 1840 residence once owned by former Virginia Gov. William “Extra Billy” Smith. (Today, it is the site of the Culpeper County Administrative Building.)

Then, Smith, Roosevelt and his party—which included a Secret Service detail, a New York Times reporter, and two or three ladies—rode to Cedar Mountain. Donning a western hat and topcoat, Roosevelt drove the lead carriage.

“The day was perfect, and the drive to the battlefield was as pleasurable as could be desired,” the Richmond Times-Dispatch reported.

Grimsley, who fought in the Battle of Cedar Mountain, described it in detail to the president on the ground where it happened, 40 years earlier.

Other participants, Union and Confederate, remembered the battle as one of the war’s hottest fights.

For example, two soldiers recalled it as “unsurpassed for ferocity by any other engagement during the war” and “a sharp, sudden work under desperate circumstances.”

Roosevelt, who led the Rough Riders during the Spanish American War, asked many questions while walking over the open terrain. The charismatic chief executive was “notably interested” in the battlefield’s monument to the 28th New York Infantry Regiment, which lost 59 percent of its men during the battle.

“In the very heart of the battlefield,” Roosevelt “received informally” many Culpeper residents who gathered to watch him tour the battleground, the Times-Dispatch reported.

After that “field reception,” Grimsley presented the president with an artillery “shell which had been dug up on the battlefield as a memento of his visit.”

Afterward, Roosevelt—a Republican—spent the night of Nov. 2, 1902, at Beauregard—home of Rep. Rixey, a Democrat--on the Brandy Station battlefield, a fact that few know, Hall said. The antebellum mansion sits on that battlefield, and was visited by Gen. Robert E. Lee and some of his commanders as the fast-moving cavalry fight swept around them on June 9, 1863.

At Beauregard, the old Rough Rider learned about the battle from Grimsley, who commanded the 6th Virginia Cavalry at Brandy Station.

At midnight before the battle, then-Capt. Grimsley had put his ear to the metal rails of the train tracks on the Culpeper side of the Rappahannock River.

The Battle of Brandy Station, a surprise Union attack, commenced at 4:30 A.M. The only Confederate trooper who was not surprised: Dan Grimsley, Hall said.

Grimsley’s actions that night open the manuscript of the historian’s long-planned book on the Battle of Brandy Station. He was “as dashing an officer as we had in the division,” said Confederate cavalry Col. Tom Munford, a Richmond native who later was the president of the Virginia Military Institute board of visitors.

After his time with Roosevelt, Grimsley lived another eight years.

About 9 a.m. on Monday, Nov. 3, the president and his hosts reached the depot at Brandy Station, and Roosevelt shook hands with many well-wishers there. Among those he greeted was local resident Theodore Roosevelt Fant—”probably his only name-sake in Virginia,” the Times-Dispatch said.

“Teddy is a baby about 1 year old and crowed vigorously in the arms of his mother as the President chuckled him under the chin,” the newspaper reported.

Just before his train pulled out from the station, Roosevelt stopped onto its rear platform and thanked the crowd for its warm welcome.

Across the river in Remington, he paused to speak to more local residents, praising the beautiful countryside and “characteristic Virginia hospitality.”

Shut by pandemic, Culpeper rollerskating rink on market for $1.95 million

Some in community want to save Dominion Skating Center on North Main Street, turn it into a youth center.

Hailed as a hometown hero and cheered by more than 200 mask-free fans during a pandemic who crowded into a barn Saturday in Culpeper County, G…

One teenager was killed and another was injured in an apparent drive-by shooting in Fredericksburg late Wednesday, police said.

The puss caterpillar is normally uncommon in Virginia, but for some reason — probably a natural cycle — it seems pretty abundant this year, said Eric Day, manager of Virginia Tech’s Insect Identification Lab. “It just seems to be an outbreak year.”

Outside the Friends of Cedar Mountain visitor center, 'Bud' Hall thanks Diane Logan after presenting her with the Theodore Roosevelt photograph.

Judge Daniel A. Grimsley’s oil portrait hangs among those of other distinguished jurists in the Culpeper circuit courtroom. A Confederate veteran, Grimsley was President Roosevelt’s guide to the county’s Civil War battlefields.