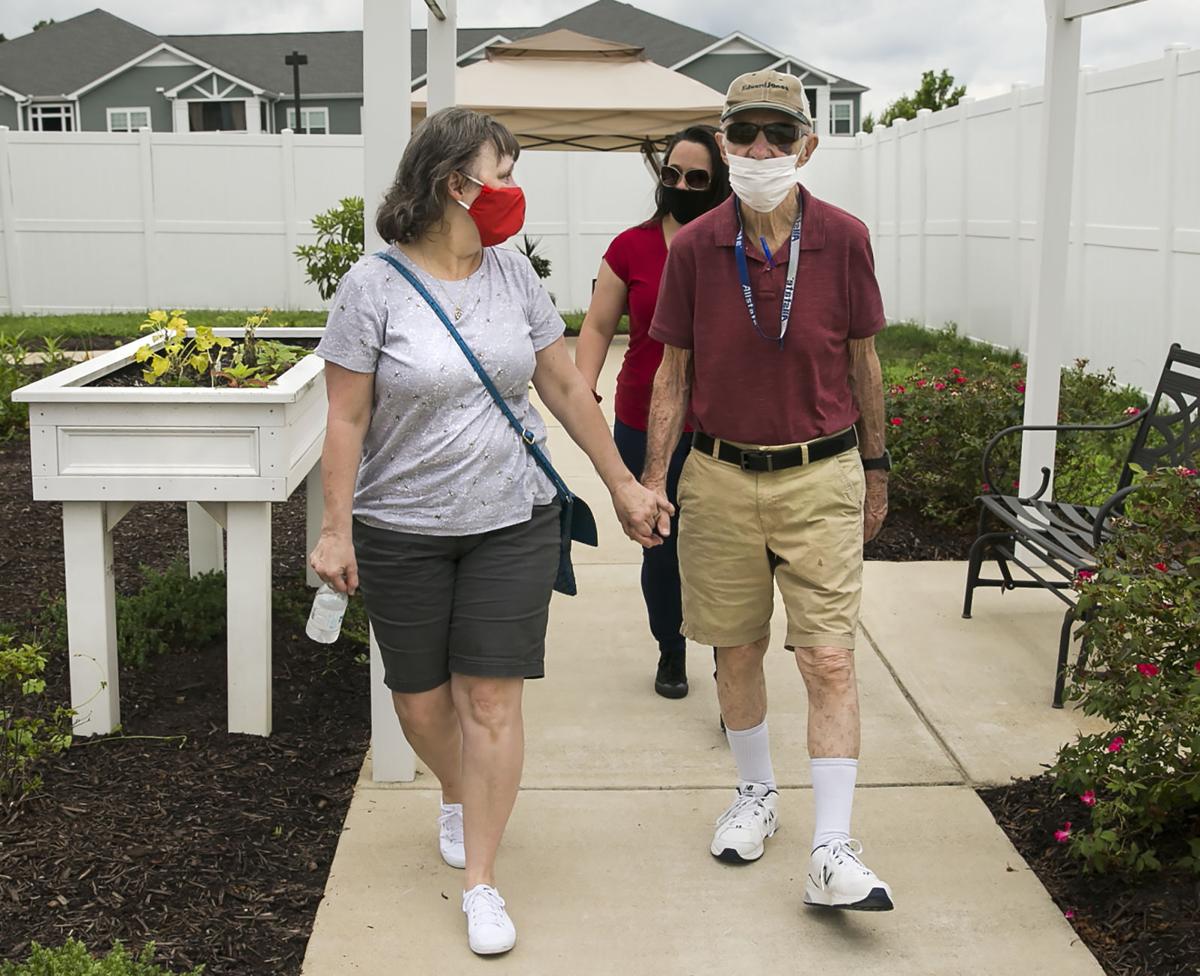 Cindy Brooks and her dad William Gill hold hands after she and her daughter Alisha McNeese (background) visited him at Poet's Walk in Fredericksburg on Saturday, Aug. 1, 2020. Poet's Walk has began allowing 20 minute outdoor visits from family members of residence during the ongoing pandemic. 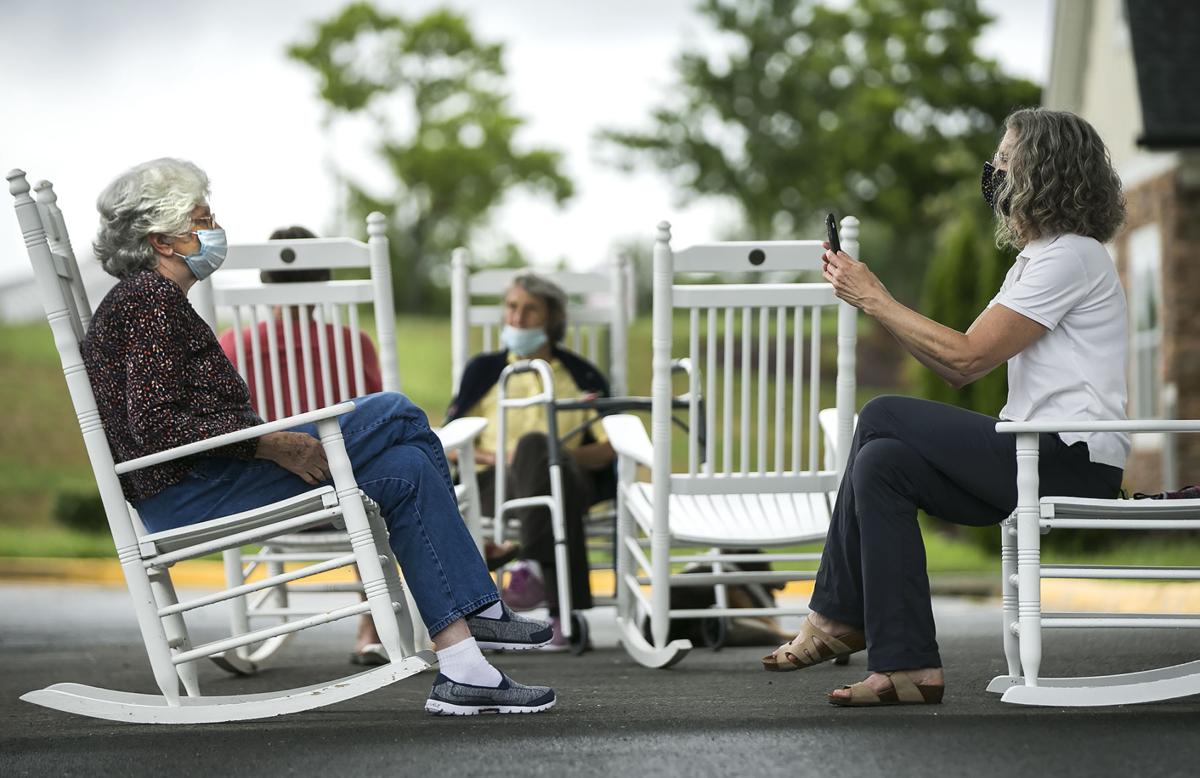 D’Alessandro photographs her mother, who lives at Poet’s Walk, a long-term care facility in the city. 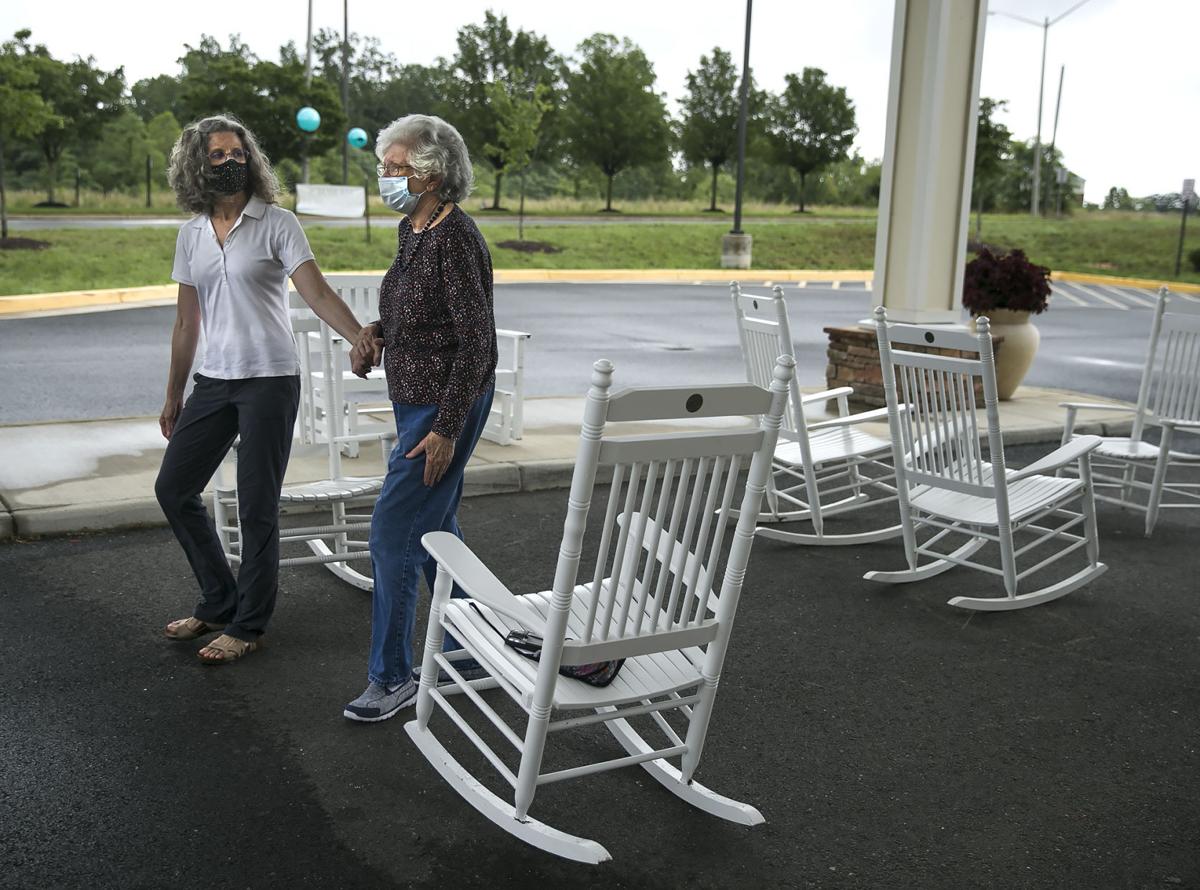 Kaye D’Alessandro holds on to her mother, Charlotte Grossnickle, 76, during a short porch visit at Poet’s Walk on Friday. Grossnickle, the first of the facility’s residents to test positive for COVID-19, has recovered from the virus.

Cindy Brooks and her dad William Gill hold hands after she and her daughter Alisha McNeese (background) visited him at Poet's Walk in Fredericksburg on Saturday, Aug. 1, 2020. Poet's Walk has began allowing 20 minute outdoor visits from family members of residence during the ongoing pandemic.

D’Alessandro photographs her mother, who lives at Poet’s Walk, a long-term care facility in the city.

Kaye D’Alessandro holds on to her mother, Charlotte Grossnickle, 76, during a short porch visit at Poet’s Walk on Friday. Grossnickle, the first of the facility’s residents to test positive for COVID-19, has recovered from the virus.

Virginia Mackintosh got the news that people with loved ones in a long-term care facility dread: her 90-year-old mother had COVID-19.

“It was terrifying to hear. We thought this might be a death sentence,” said Mackintosh, who lives in Fredericksburg and called the facility regularly for video chats with her mother. “That was very reassuring, once I could see her and see that she was herself. It wasn’t like she seemed desperately ill.”

As it turned out, all 15 people—10 residents and five workers—who tested positive at Poet’s Walk Fredericksburg were asymptomatic, meaning they had no symptoms of the respiratory disease. Studies suggest that at least four of every 10 people infected don’t get sick, but can still spread the illness to others.

Administrators discovered COVID was in Poet’s Walk, a home for people with memory issues, only after they decided to test everyone in the building. The proactive testing, and containment measures that followed, may have saved countless lives, said Dr. Donald Stern, who retired last week as acting director of the Rappahannock Area Health District.

Mackintosh, a college professor, would agree that the more information, the better, in any circumstance.

“I think testing is critically important,” she said. “If I didn’t know my mother was COVID positive and she had had a fall, I would have seen if I could be with her in the emergency room. I could have contracted it, even if I was being careful—she likes to hold my hand. It could have spread to me, to my family, to my daughter in remission from cancer.”

Diana Marks, executive director at Poet’s Walk, wanted others to know about the facility’s experience to reinforce that a COVID-19 outbreak can be managed, if caught early.

“Testing can greatly reduce the risk for a catastrophic outbreak and contain the spread of the virus, making recovery possible even among the most vulnerable populations,” she said in an email. “In order to survive COVID, it’s imperative that we learn from one another and join together in order to protect area long-term care residents.”

Almost 60 percent of Virginia’s virus-related fatalities—more than 1,200 people—were residents or workers at long-term care facilities. The state rate far exceeds local and national averages, which indicate about 40 percent of COVID-19 deaths are linked to those types of settings.

Twenty of the 50 deaths in the local health district resulted from outbreaks in two facilities: Carriage Hill Rehab & Health Center in Spotsylvania County has had 18 deaths and Hughes Home for Adults in Fredericksburg has had two.

Identifying virus cases in such facilities has been part of the local health district’s strategy from the start, Stern said, because “symptoms in the elderly can be particularly subtle and subjective.” He said a slight change in a person’s mental activity can be an early symptom among older people.

Detecting that change can be difficult among people who have other illnesses such as the types of dementia-related issues some Poet’s Walk residents have.

That’s why the health district partnered with local agencies and the Virginia National Guard to offer free building-wide testing to the 21 long-term care facilities in the Fredericksburg area. Twelve took advantage of the offer, Stern said, including the five facilities that have had outbreaks.

Kim Place-Gateau, a Vermont resident whose 76-year-old mother was at Carriage Hill before she moved to Poet’s Walk, is grateful the proactive testing was done. She said she feels terrible about the deadly outbreak at Carriage Hill, adding “they’re wonderful people there.”

Place-Gateau admires Poet’s Walk for making the decision to test for virus cases “even though they didn’t have a fire to put out.” She wonders if others fear the “public relations” nightmare that would follow if cases were found.

“I’m sure that health-care workers want to do the right thing,” she said, “but these are businesses, they’re run by corporations, and sometimes decisions are made by bean counters and not by health-care professionals.”

‘ON PINS AND NEEDLES’

Charlotte Grossnickle, 76, was the first resident at Poet’s Walk diagnosed with COVID-19. Her experience illustrates the many oddities—and unknowns—of the disease.

She was sent to the hospital in early June because staff worried she was having a stroke. The same day, she had a Facetime visit with her daughter, Kaye D’Alessandro who noticed how quiet she was. Grossnickle isn’t able to communicate, but she enjoys interacting with others.

The elderly woman had a fever, but hospital nurses thought her urinary tract infection was the culprit. She showed no signs of respiratory problems and was given a COVID-19 test as a precaution. The positive result surprised—and scared—her daughter.

“The whole time she was in the hospital, I was on pins and needles,” D’Alessandro said, waiting for her mother’s condition to worsen.

An x-ray showed Grossnickle had pneumonia, but she never had trouble breathing or needed oxygen. Her fever lasted only 24 hours.

She had two more COVID tests at the hospital—both negative—then got a positive result when she returned to Poet’s Walk. She had to be quarantined, away from all those whose company she craved, and that broke her daughter’s heart as much as the virus worried her.

“Dementia is so hard, they’re already so isolated, then with COVID, you’re having to isolate them again, so not only are they mentally isolated, they’re physically isolated,” D’Alessandro said. “I was so worried she was just gonna die alone, and she wouldn’t get to see me or hold my hand or anything.”

Grossnickle lost so much weight last month after the infection, pneumonia and COVID-19, she looked more frail than her daughter had ever seen. As the weeks have gone by, she’s gotten back on her feet again.

“But she’s still not 100 percent,” her daughter said, “and I worry about the long-term effects.”

The state lists the status of the virus outbreak at Poet’s Walk as “pending closure.” The facility recently shifted from window visits, where family members stood outside and waved to patients inside, to once-a-week, 20-minute “porch visits,” where family members gather outside under a blue canopy and sit 6 feet away from loved ones.

“It’s hot as Hades,” said Cindy Brooks of Stafford County, but she’s thrilled to lay eyes on her father, William Gill. “He still wears his flannel shirt and warmup pants, and he’s happy to see us. I think that’s the main thing right now, these people have been quarantined for far too long.”

When he tested positive for the virus, he seemed more tired than usual, but was otherwise in good condition. But then, he’s in good physical health except for the dementia, his daughter said.

Like D’Alessandro, Brooks worries what toll the disease and additional isolation caused her parent and what his future may hold. She and her father immediately embraced the first time they saw each other in person and have continued to do so during weekly visits.

“I do hug him and he hugs me,” she said with a catch in her voice, as she seemed close to tears. “If something happened to him tomorrow, I want to hug my father before he passed away.”

Testing for COVID-19 at long-term care facilities is crucial, but so are the actions that follow, said Dr. Donald Stern, who retired last week as acting director of the Rappahannock Area Health District.

Resident who test positive for the virus are isolated from others in an area the facility has deemed its “hot zone.” Staff expand the use of personal protective gear in this area.

Workers who test positive, but don’t show any symptoms, are told isolate at home until they’re no longer infectious, usually 10 to 14 days, Stern said.

“It’s not just about testing, it’s what one does with the test results that really matters,” he said.

Stern praised staff members at area facilities, who “deserve to be recognized as some of the hidden heroes of COVID-19 for all of the work they have done and continue to do.”

Gina Clinthorne, whose mother is at Poet’s Walk Fredericksburg but did not contract the disease, said the same, especially of those who volunteered to care for patients who tested positive.

“They knowingly put themselves at risk to care for the loved ones of other people’s families,” she said. “That humbles me.”