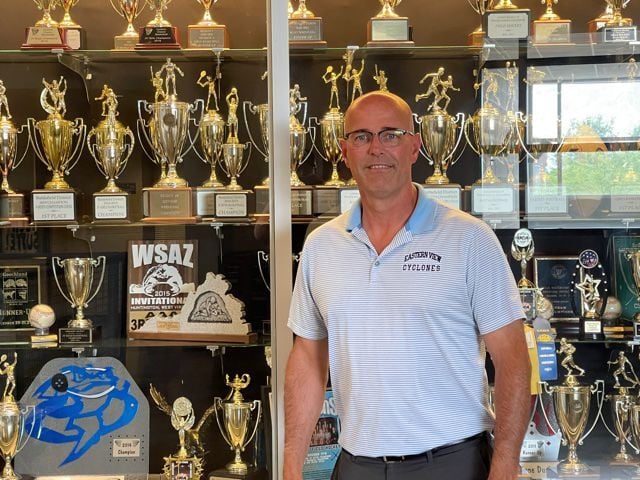 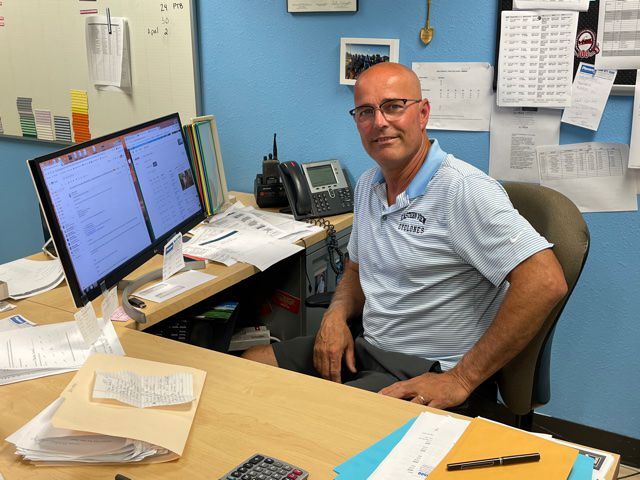 Eastern View athletic director Mark Settle sits at the desk in his office, Wednesday, June 2, 2021.  Settle will be retiring from his position on Aug. 31. 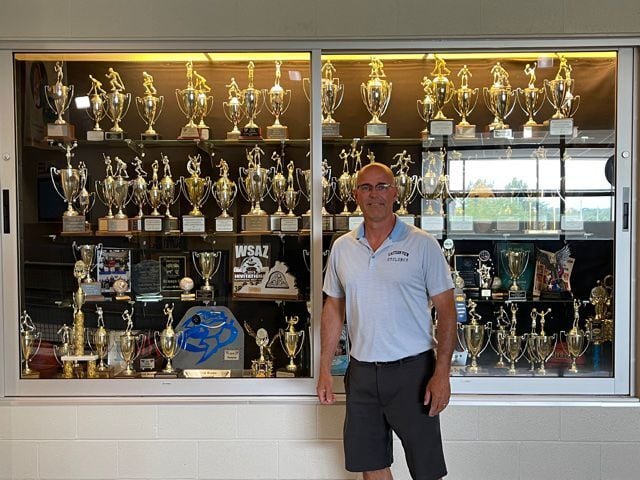 Sitting in his office on a rare quiet day, Mark Settle reminisced about the most memorable moments from his 13 years as Eastern View High School's athletic director.

Settle isn't normally one for sitting down on the job.  He's been the Cyclones' AD since the school first opened its doors in 2008, routinely grinding out more than 60 hours a week to help build Eastern View's athletic program into one of the most respected in the region.

But on this quiet Wednesday afternoon, less than a week after the conclusion of another school year, Settle found the time to hunker down and look back on a career that will come to an end when his retirement becomes effective on Aug. 31.

He rattles off a handful of memories, all in vivid detail, that come together to paint a portrait of the success the Cyclones have experienced under his watch.

Settle harkens back to the first football game ever played at Eastern View—a pre-season matchup with crosstown rival Culpeper in August 2008 that drew in excess of 3,500 fans.

"Our scoreboard hadn't even been mounted yet because we were waiting on permits," he said with a chuckle.  "The paint on everything had barely dried, but people turned out in droves.  It was a spectacle."

Some of Settle's fondest memories are of things that the casual sports fan may not take notice of.  He recalled a boys basketball game during the school's early years where multiple Cyclones fouled out, leaving two players that had been suspended for violating team rules as the only options left to substitute.  Rather than allow either of them to play, Eastern View's coach opted to play the rest of the contest at a 5-on-4 disadvantage.

"That one action by the coach sent a message to those suspended players, the rest of the team and everyone who was there that night that we do things the right way at Eastern View," Settle said, his chest swelling with pride.

Then there was the Cyclones' field hockey team's emotional 3-2 overtime win against Great Bridge in the 2019 Class 4 state championship game.  It marked the end of legendary head coach Peggy Allen's career, as she opted to retire after 300 career victories and that long-awaited state crown.

"That win meant so much, and not just because of how big an accomplishment winning a state championship is," he said.  "After all the years she devoted to our field hockey program and the game overall, seeing Peggy get that championship will always stick out for me."

"One of the reasons we were able to have so much success over the years is because of Mark's support," Allen told The Star-Exponent last year.  "He was always there if we needed anything, but he was never looking over our shoulder.  He trusted that we would work hard and represent Eastern View to the best of our ability."

Settle, who played football and basketball before graduating from Culpeper in 1984, said he learned to lead by example a long time ago.  He returned to his alma mater in late 1993 and served as an assistant football coach under Lou Sorrentino for several years, including during the Blue Devils' 1999 state championship season.  He also spent time as both an assistant and a head coach for Culpeper's baseball program between 1994 and 2003.

"My mindset is that nobody's going to outwork me," he said.  "I don't micromanage, but I challenge my coaches to work as hard as I do to make our athletic programs the very best they can be.  I tell them that, if they can do that, we're all going to be okay."

Allen included, many of the Cyclones' coaches have met Settle's challenge over the years.

Current Culpeper AD Daniel Nobbs, who played baseball under Settle before graduating in 1997, was tapped by his mentor to be Eastern View's first head baseball coach.  He responded by guiding the Cyclones to over 150 wins, nine regional playoff berths and eight district or conference regular season or tournament titles during his decade at the helm.

After coaching with Settle at Culpeper in the mid-90s, Greg Hatfield was offered the opportunity to become Eastern View's first head football coach.  Over the course of 13 years, Hatfield compiled a 109-36 record while leading the Cyclones to five district or conference championships and one regional crown.

"The expectations at Eastern View have always been high, both on and off the field," Hatfield said recently.  "And a lot of that has to do with the way Mark carries himself."

Still reminiscing, Settle eventually settles on one moment as his absolute favorite.

"In 2012, my sons Brandon and Jacob were both on the football team here," he remembers.  "Brandon was the quarterback, and Jacob was a wide receiver.  A lot of times, I'm running all over the place during games helping out with various things, so I miss a lot of plays.  But on this particular night, I just happened to turn around in time to see Brandon complete a pass to Jacob.  Our PA announcer Dave Richardson called out, 'Settle to Settle,' and it was just one of those moments that will always be etched in my brain, both as an athletic director and, most importantly, as a father."

Watch Now: America is running out of lifeguards

Children and delta: What parents need to know

Children and delta: What parents need to know

Local father James Manning died from gunshot wounds while in his house.

Tight-knit student class gets together for 60th anniversary of graduation, a year late due to COVID-19, and still full of affinity for each other; former classmates will meet three times for lunch in 2021.

Eastern View athletic director Mark Settle sits at the desk in his office, Wednesday, June 2, 2021.  Settle will be retiring from his position on Aug. 31.