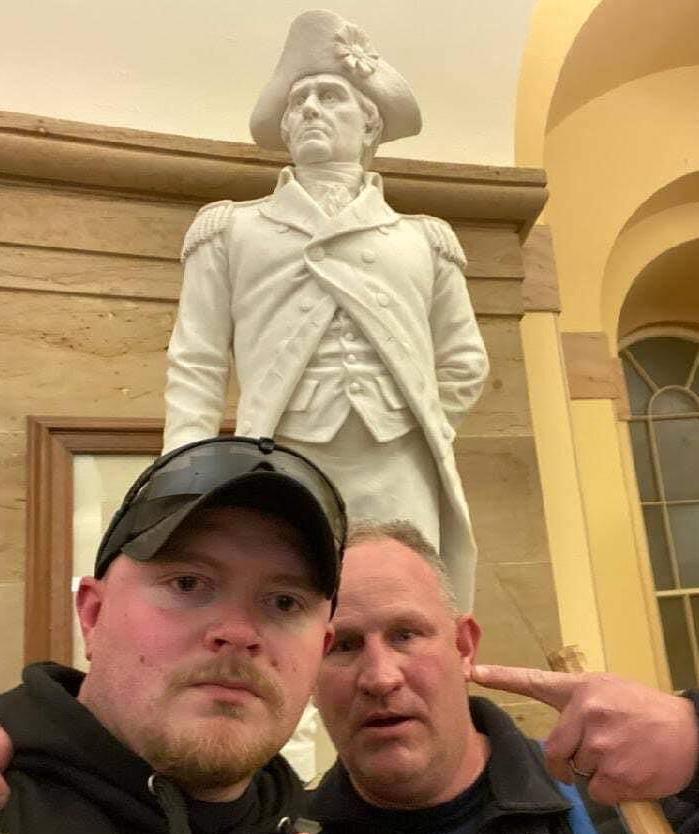 A photo of Jacob Fracker, left, and Thomas “T.J.” Robertson inside the U.S. Capitol on Jan. 6 that was part of the complaint filed against them in federal court. The photo has been cropped to remove an obscene gesture that Fracker was making. 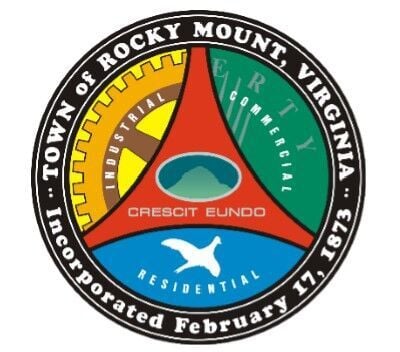 By MIKE ALLEN The Roanoke Times

Federal authorities have charged two Rocky Mount Police Department officers in connection with their admitted presence inside the U.S. Capitol during the Jan. 6 riots.

A federal arrest warrant unsealed Wednesday charges Officer Jacob Fracker and Sgt. Thomas “T.J.” Robertson with knowingly entering a restricted building without authority to do so and knowingly engaging in conduct that disrupts government business. The warrant also charges Robertson and Fracker with engaging in disruptive conduct in the Capitol in order to interfere with a session of Congress.

The federal court in Roanoke scheduled a hearing at 4 p.m. Wednesday for Robertson and Fracker.

The warrant cites comments the officers made on Facebook as evidence.

In interviews with The Roanoke Times, Robertson has maintained he and Fracker did nothing illegal.

In a selfie that Fracker took inside the Capitol, the men are standing in front of a statue of John Stark, a Revolutionary War officer from New Hampshire who is famed for having penned that state’s motto, “Live free or die.” Fracker is making an obscene gesture. Robertson is pointing at Fracker while holding a wooden object. Robertson wrote Wednesday that he was holding the pole of an American flag.

According to Robertson, Capitol Police allowed him and Fracker into the building, served them bottled water and told them to stay within cordoned areas, which they did. He said he and Fracker neither saw nor participated in any violence.

In one comment included as evidence, Robertson wrote that he was “f----—PROUD” of the photo. “If you are too much of a coward to risk arrest, being fired, and actual gunfire to secure your rights, you have no words to speak I value,” he wrote.

“Sorry I hate freedom?” Fracker wrote onFacebook about the photo, also included as evidence. “Not that I did anything illegal.”

The town announced Sunday that the officers had been placed on paid administrative leave, and it had notified federal authorities of their presence at the Capitol.

Fracker is a K9 unit officer who joined the Rocky Mount Police Department in 2017. Robertson is his platoon sergeant.

Late Tuesday, Fracker issued a written statement that his actions that day were an “expression of grief against what very many Americans would consider tyranny.”There is no credible evidence that widespread voter fraud took place in 2020’s U.S. presidential election. Judges appointed by Republicans and Democrats, including justices of the U.S. Supreme Court, struck down more than 40 legal challenges to the election nationwide.

But Fracker, like Robertson, remains unconvinced. “Maybe some people’s agendas are just to cause havoc at the beckoning of a higher, more corrupt power,” he wrote.

Fracker’s statement did not discuss any details of what he and Robertson did. Instead, he shared indignation at the notion that anyone would consider him a seditionist and racist.

“My entire adult life has been dedicated to protecting my fellow Americans. I’ve never once cared about skin color, religion, political views, sexual orientation or anything. Americans are Americans, we bleed the same,” he wrote. “I have fought against terrorists who threatened our way of life. I’ve put away drug dealers who would have seen to our children getting addicted to their product just so they could make a buck.”

Fracker enlisted in the Marine Corps in 2010 and was deployed to Afghanistan. Honorably discharged at the rank of corporal, he now serves in the Virginia Army National Guard, he wrote: “My love for my fellow countrymen has no bounds, to go as far as me willingly giving my life for any other person in this country.”

On Monday night at Rocky Mount’s municipal building, about 25 protesters who came to pressure the Town Council to dismiss the officers ended up having a heated exchange with about 25 people who came to support Robertson and Fracker.

Craighead expressed skepticism that anyone who went to Trump’s Jan. 6 rally in Washington, D.C., could profess ignorance of plans to storm the Capitol while Congress was certifying the Electoral College votes.

“It was a riot, and he even admits it,” she said, referring to Robertson’s Facebook comment: “The right IN ONE DAY took the f----—U.S. Capitol. Keep poking us.”

“Why are Black and brown taxpayers paying for these two officers to be on leave with pay?” Rocky Mount resident Kasey Smith said.

“Not only did this distillery allegedly dump tens of thousands of gallons of industrial waste into a stream, [its owner] also allegedly lied about it to investigators, and that will not be tolerated in Virginia,” the attorney general said.

A photo of Jacob Fracker, left, and Thomas “T.J.” Robertson inside the U.S. Capitol on Jan. 6 that was part of the complaint filed against them in federal court. The photo has been cropped to remove an obscene gesture that Fracker was making.