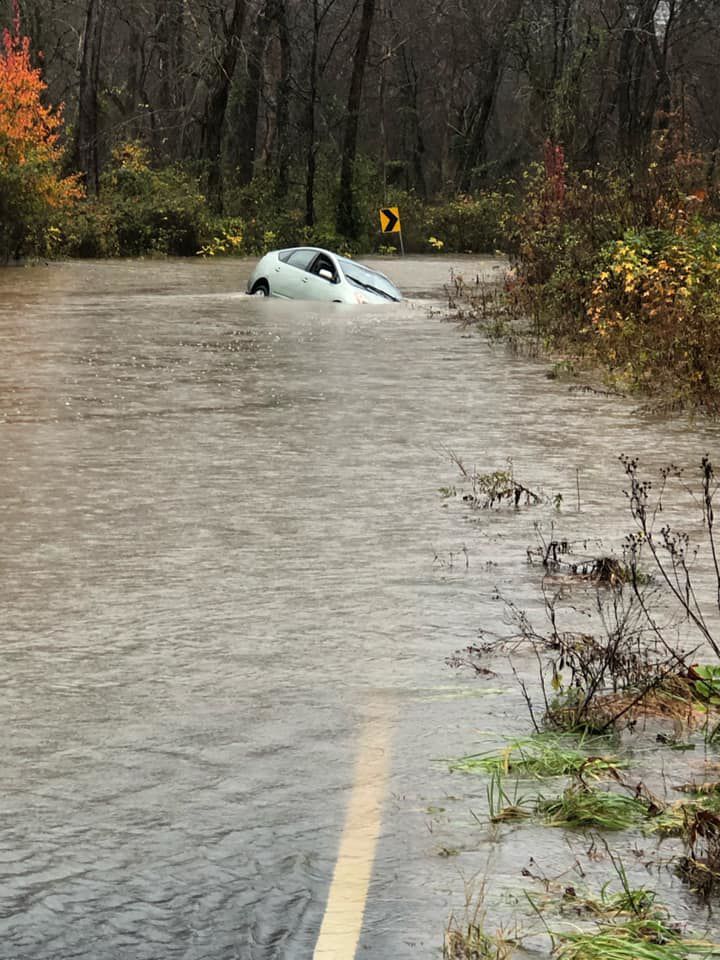 Edgar’s Prius was swept into a flooded ditch off Brooke Road in southern Stafford on Nov. 12. 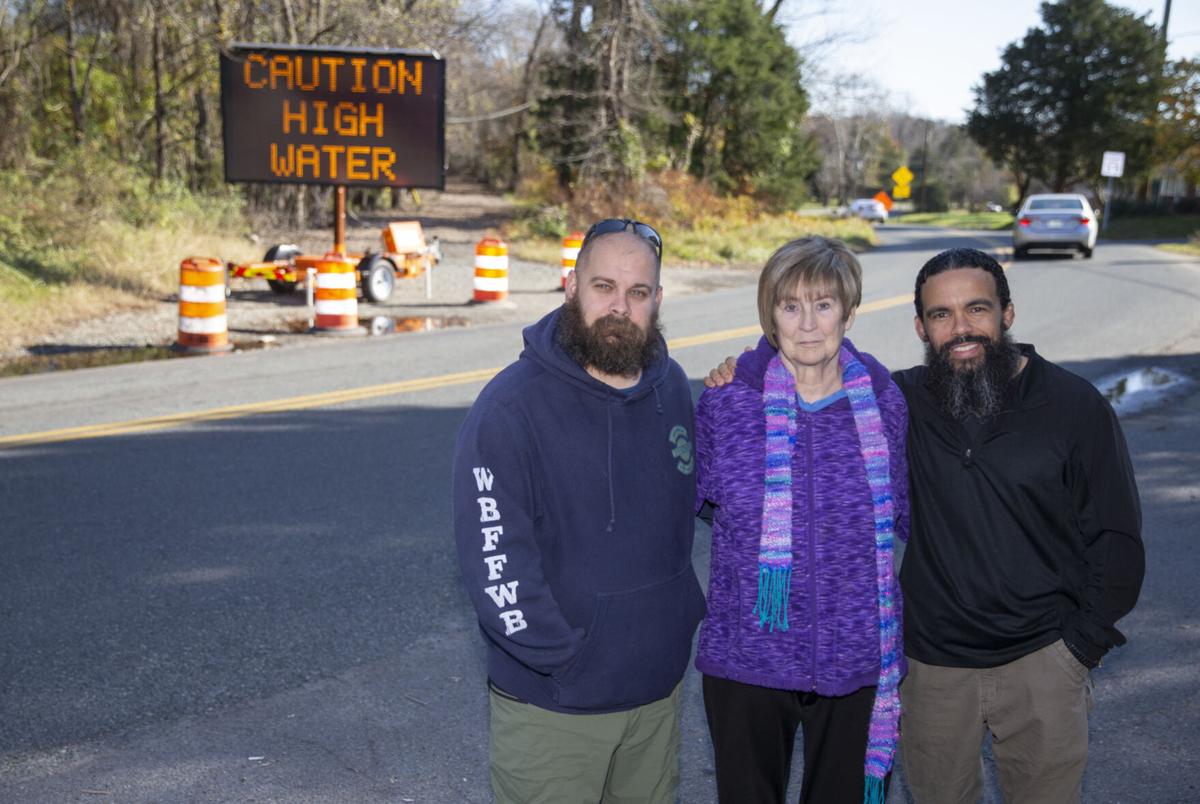 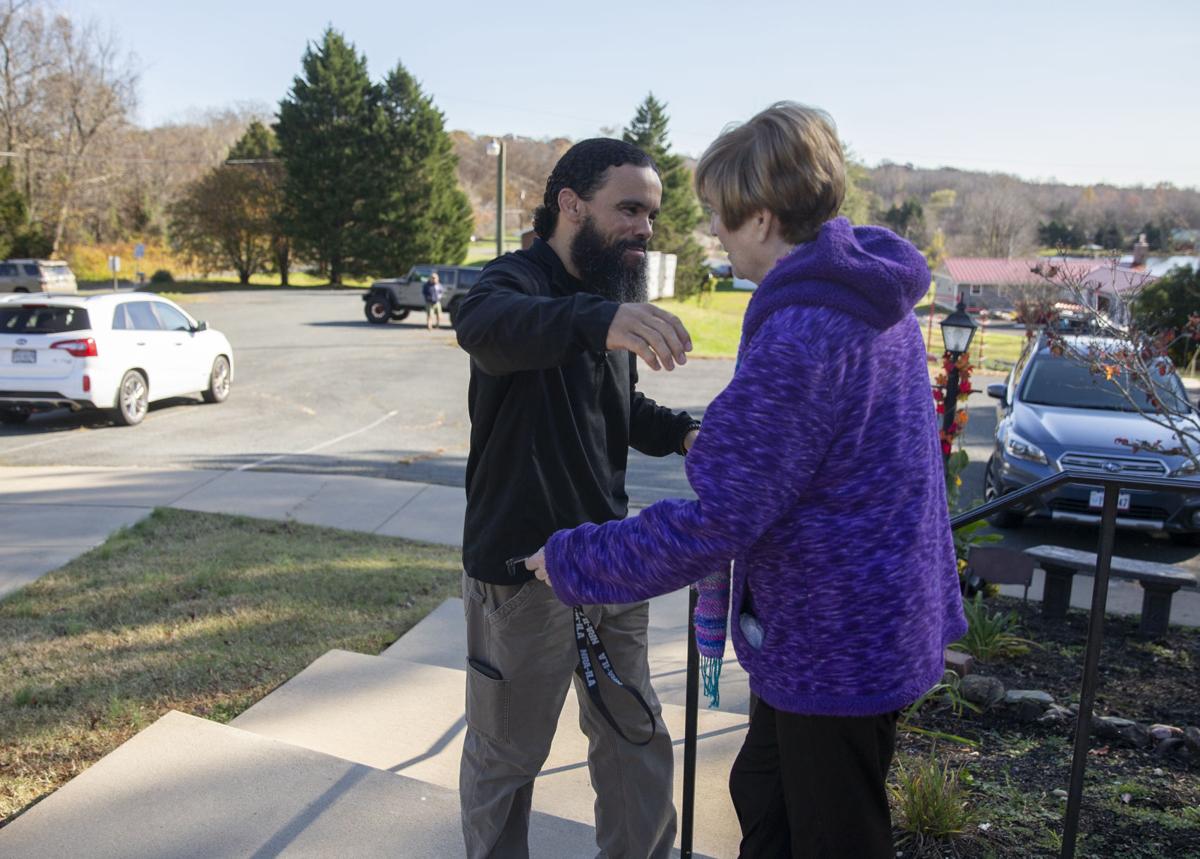 Maria Edgar hugs Joseph Sirko, who brought her to safety after she tried to drive her Toyota through a flooded portion of Brooke Road last week. ‘She was scared,’ Sirko said. ‘It’s just the right thing to do.’

Maria Edgar is adding two Good Samaritans to her Christmas list this year, after the pair brought her safely to shore last week along a flooded southern Stafford County road.

“These men bent over backwards to help me,” said Edgar. “I’m getting them a nice early Christmas present.”

In a heavy downpour Nov. 12, Edgar, 74, left her Marlborough Point home in her Toyota Prius at 10 a.m. for a doctor’s appointment. As she traveled west along Brooke Road, she came upon an orange “road closed” sign just before the low point in the road’s S-curves, where high water always accumulates during heavy rain.

Proceeding slowly, Edgar noticed pickup trucks and other vehicles making it through the high water and decided she’d give it a try herself.

“I thought I’d try it real slow,” said Edgar. “It’s like it sings out to you, ‘come further, come further, you’re doing good,’ and by the time you realize it, it’s way too late.”

Soon, Edgar’s 3,000-pound Prius was floating uncontrollably in the current.

“I said, please God, let it turn around,” said Edgar, hoping the car would change course away from the deeper pool of water, and float back to higher ground, but she wasn’t so lucky.

“I realized the water was starting to come in. I could hear it, and kept screaming for help, someone to call 911,” said Edgar. “The water was so cold. It was freezing cold.”

Edgar lowered her window and swam head-first out of her vehicle into the murky water. As soon as she was out, the current began pulling her away from her car, but she grabbed the rear door handle and held on.

Unbeknownst to Edgar, she was followed into the flooded road by Joseph Sirko, an off-duty FBI agent.

Just moments before, Sirko had been traveling east on Brooke Road in his Toyota 4Runner, returning to his Marlborough Point home, when a pickup truck and Edgar passed by him slowly heading west.

“I saw her car and thought, she’s not going to make it,” said Sirko. “I made a U-turn, and when I came back, I saw her vehicle was in the ditch, nose down, turned sideways. I stopped and stood on my running board to call out to her as I saw her exit the vehicle.”

Sirko yelled to Edgar to check if she was OK, asked a nearby motorist to call 911, then ventured into the water to rescue her.

“[Sirko] told me to stop, I’m coming in to get you,” said Edgar. “He walked through that cold, filthy water to come get me. He had a jacket to put on me.”

After Sirko got Edgar to safety, retired Army 1st. Sgt. Rick Rowell waded out to the Prius to recover her purse, vehicle registration and other personal items that he saw floating near the submerged car. He returned all of the items to Edgar.

Rowell, who lives nearby on Camp Geary Lane, owns a lifted Jeep and makes it a point each time Brooke Road floods to go to the area to assist stranded motorists. During the summer, he helped pull a Mercedes from the water.

“I’ve got nothing better to do to,” said Rowell. “I just go hang out in my Crocs and board shorts.”

Once safely in Sirko’s vehicle, Edgar was put at ease, and contacted her husband by phone. Edgar said the pair of men empathized with her during the entire ordeal as if they were lifelong friends.

“[Sirko] was just thinking of me and my comfort and me not having to do anything,” said Edgar. “It was like, I was his wife or a good friend. Both of those men treated me like that.”

Sirko said, “She’s a real sweet lady, and she was scared. It’s just the right thing to do.”

It wasn’t the first time a vehicle has been swept away on Brooke Road. About 300 homes are situated along the flood-prone stretch that parallels Accokeek Creek, from Andrew Chapel Road to the canoe launch at Crow’s Nest Natural Area Preserve. Even more residents live farther east at Marlborough Point and the road is frequently traveled by visitors heading to Aquia Landing Park. Residents in the area say the roadway floods every time it rains, and the problem has gotten worse with each passing year.

Kelly Hannon, communications manager for the Virginia Department of Transportation’s Fredericksburg district, said VDOT regularly removes debris, leaves and soil buildup from drainage pipes and culverts in the area to help minimize flooding, but Edgar said those efforts are not enough.

“We want something done meaningful,” Edgar said. “It’s only a matter of time before something happens to someone down there.”

In mid-September, county supervisors tapped into reserve money from the transportation fund to repair the culverts on Brooke Road, but Hannon said that work is still in the planning phase.

“They’ve got to do something fast,” said Edgar. “Whatever they did in the way of drainage didn’t do any good at all. I’m afraid a mother is going to have a baby in there, or someone who is handicapped. … At least I could get out through the window.”

Edgar said as a result of her experience last week, she will work with her neighbors in the area to permanently resolve the ongoing flooding situation on Brooke Road. Already, more than 600 members of a social media group called Friends of Brooke Road are fighting the same battle.

Although Edgar’s Prius was written off by her insurance company as a total loss, she said one of her biggest fears the day of the incident was returning home and finding out if she had received a traffic citation as a result of passing through a “road closed” warning sign.

“I called, and that nice police officer told me, you have bigger problems than this right now to worry about,” said Edgar. “He probably could have given me at least two tickets. Those two men and that deputy were absolutely wonderful.”

What we can learn from Covid-19 for the climate crisis

How climate change is threatening Greenland

How climate change is threatening Greenland

Edgar’s Prius was swept into a flooded ditch off Brooke Road in southern Stafford on Nov. 12.

Maria Edgar hugs Joseph Sirko, who brought her to safety after she tried to drive her Toyota through a flooded portion of Brooke Road last week. ‘She was scared,’ Sirko said. ‘It’s just the right thing to do.’