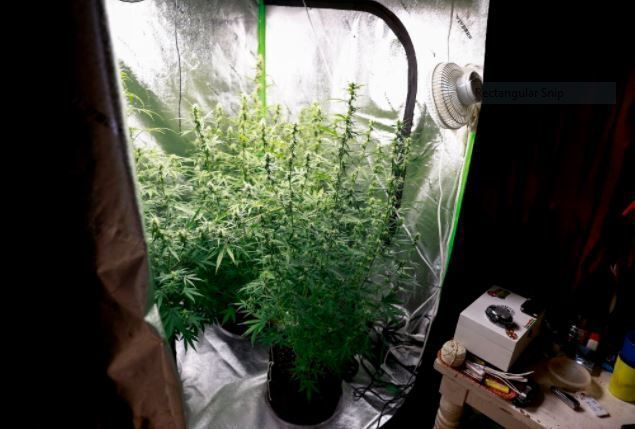 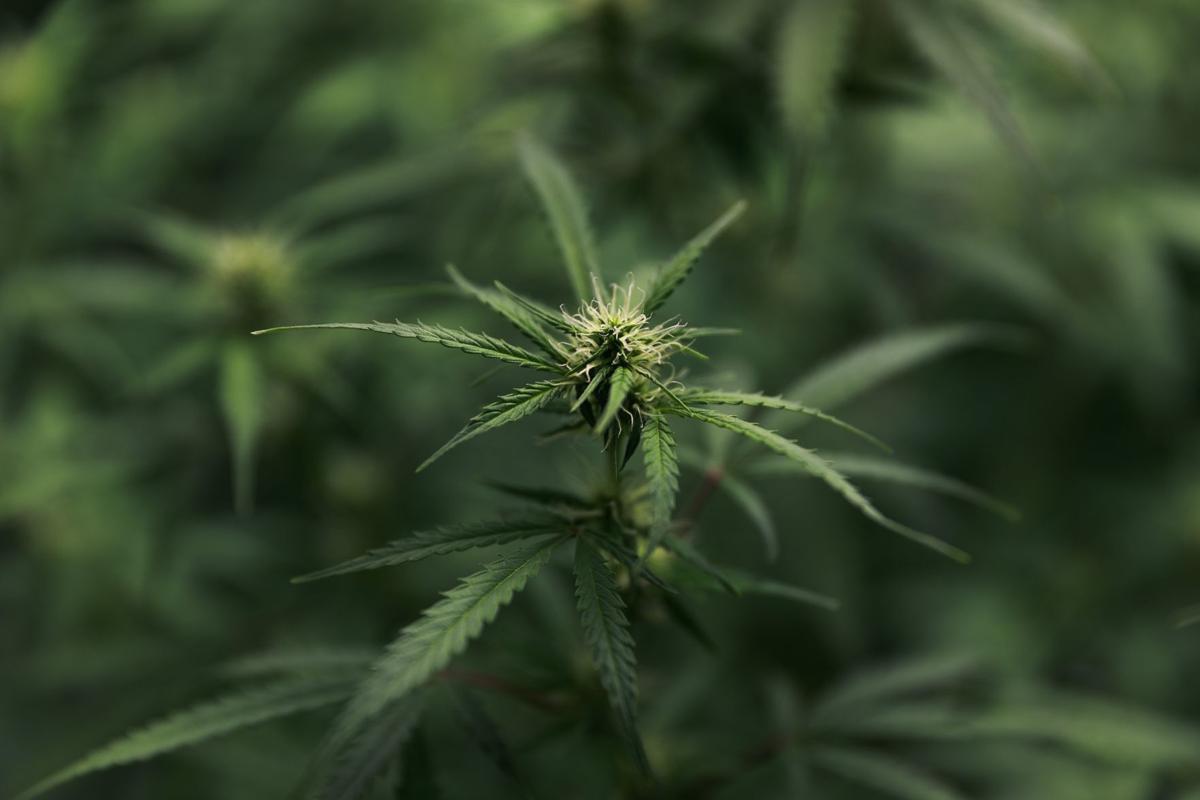 Marijuana plants at a home in Virginia.

Marijuana arrests have plummeted more than 90% in the Richmond region since Virginia's new cannabis law went into effect July 1. The law legalized possession of up to an ounce and the cultivation of four pot plants per household, among other decriminalization provisions.

During the first seven weeks of the law, only 25 marijuana-related arrests were made in Richmond and the counties of Chesterfield, Henrico and Hanover. That's compared to 257 arrests during the same seven-week period in 2020, according to arrest data provided by law enforcement officials in those localities.

"A ninety percent reduction in marijuana arrests indicates that the public policy is performing as intended and in a manner that is consistent with post-legalization observations from other states,” said Jenn Michelle Pedini, development director for the National Organization for the Reform of Marijuana Laws (NORML), who also serves as executive director of the state chapter, Virginia NORML.

A few people who may not yet be familiar with the nuances of the law are being charged with possessing or distributing the drug in cases that don't fall within the statute's sometimes-confusing conditions.

A Chesterfield man was arrested Aug. 10 after authorities found more than 50 suspected marijuana plants in the bed of his truck and inside his home - which far exceeds the legal limit of four plants. And the plants were not tagged with the grower's name and driver's license number as the new law requires.

Police said the person who jointly owns the house with the pot grower, but who doesn't live there, called police to report the grower possessed more pot plants than the new law allows.

The man's attorney, Julian Viscidi, declined to comment about the specifics of his client's case or mindset to avoid potentially compromising his defense. The grower faces two felonies: possession with the intent to distribute more than 5 pounds of marijuana, and possession of between 50-100 marijuana plants.

The largest number of arrests - 10 - were marijuana users in the 18-20 age range, who were charged with simple possession of the drug while under the prescribed legal age of 21, which is a civil violation. The new law allows adults 21 and over to possess up to an ounce for recreational use, but it cannot be consumed or shared in public.

One of those offenders was a 19-year-old Chesterfield man who became the first person in the Richmond region to be charged with a marijuana offense since the new law went into effect.

In that case on July 15, a patrol officer conducted a registration check of a vehicle in the area of Courthouse and Hull Street roads. The officer, after determining the vehicle's owner was showing a suspended license, initiated a traffic stop; the 19-year-old owner was found to be driving the vehicle, police said. He was cited for driving on a suspended license and possessing marijuana.

Several other people in that age group have been charged with possessing marijuana as a secondary offense.

In an Aug. 6 case, an 18-year-old Richmond woman and two friends were stopped by police for suspicion of shoplifting from a JCPenney's store at Chesterfield Towne Center. Officers recovered the stolen items in their car, along with a small amount of marijuana. All three were charged with shoplifting, but the 18-year-old also was issued a summons for underage possession of pot.

The large majority of marijuana arrests since the law went into effect have been in Chesterfield, where police have charged or issued summonses to 20 people - seven of whom were juveniles ages 16 or 17 - through Aug. 19. But Chesterfield's marijuana arrests have dropped 86% so far this year.

"In terms of our enforcement, we have not shied away from enforcing any laws that are on the books," Chesterfield Police Chief Jeffrey Katz said. "We believe that arrests or prosecutions is advantageous for public safety. So that's kind of the philosophy that we operate under. I mean we're not out actively looking for [marijuana] arrests. But if we see violations of the law, and we feel it appropriate, we make the charge."

In late June, as the state’s new marijuana law was about to go into effect, Katz posted a message on Facebook that warned Virginians about the statute’s nuances, along with a short video that outlined the provisions.

"We worked really hard to make sure that we were educating our community about the changes in the law," Katz said. "It was important for them to understand the nuances of the law, because the law is very confusing. And in order to comply with it, they first needed to understand it."

Katz said he couldn't speculate on whether the people charged with marijuana offenses so far this year is due to their ignorance of the law's nuances, or simply making choices they would have made regardless of the new law.

However, Katz believes the new law is ill conceived. "I think the manner in which our legislature went about doing what they did was poor public policy. There's no public marketplace for anyone to go purchase what they made legal, and that means that in order for someone to possess marijuana, they either have to grow it themselves or purchase it from a street-level drug dealer - and that's what we're seeing."

"Unlike the lawmakers," Katz added, "I've seen the fruits of search warrants [executed by his officers]. And I know that our meth dealers, our fentanyl dealers, our opioid dealers, our marijuana dealers are all the same people. And what we've done, is we've just opened up a black market for marijuana and we have enriched the criminal element. That's a populist policy, but it's dangerous."

Selling marijuana will continue to be illegal until the state launches the regulated legal market in 2024 and issues licenses for growing, processing and retail sales. Towards that end, General Assembly established the Cannabis Control Authority, a new regulatory board that will work to launch Virginia's new marijuana market and ensure compliance with state rules.

Like Katz, Hanover Sheriff David Hines said the new marijuana law has not lessened his department's commitment to enforcing the law. "If a violation is observed, the appropriate charges are placed,” he said in a statement.

But as expected with the changes in Virginia's new marijuana law, "our number of arrests have decreased" for that offense, Hines said. Hanover didn't record a single marijuana arrest between July 1 and Aug. 20.

Marijuana enforcement has not been a high priority for Richmond police, which this year has been forced to contend with an alarming number of shootings and killings.

Sixty-two people have been slain in the city so far this year compared to 47 at this time last year, a 30% increase. Those numbers include some deaths that Richmond police don’t record in their homicide statistics, including self-defense killings. More than 150 people have been wounded in shootings this year in the city.

"RPD officers are focused on the evolving needs of our communities to include gun violence, homicides, theft from motor vehicles, and reducing occurrences of residential burglaries and robberies," Richmond police Chief Gerald Smith said in a statement.

In neighboring Henrico, Police Chief Eric English said with the recent amendments in legislation, his department is adapting to the new laws passed by the General Assembly. "Policing is an ever-changing and challenging profession," he said.

Virginia's move towards decriminalization has not altered existing state law governing possession with intent to distribute marijuana, which remains a felony offense.

At least six of the people charged locally since the new law went into effect are facing felonies for distributing or possessing with the intent to distribute between 1 ounce and 5 pounds of marijuana, or quantities above that.

In an Aug. 6 case in Chesterfield, police said a 42-year-old Petersburg man was found with several large and small bags of marijuana and a small amount of suspected cocaine after an officer stopped him for running a red light.

The new law will have no bearing on the outcome of this defendant's case, because he's charged with possession with intent to distribute between 1 ounce and 5 pounds of marijuana - an offense still punishable in Virginia by up to 10 years in prison.

A serial sexual assailant who accosted or attacked seven young women in the Fan District between 2015 and 2018 was sentenced to serve 87 years in prison Thursday. The punishment will be served consecutively to a 127-year prison term the Colonial Heights man received last summer for sexually assaulting three other women.

A bill filed in the Virginia House of Delegates this week would ban abortions after 20 weeks of gestation except in cases where the pregnant woman is at risk of death or "substantial and irreversible" damage to her health.

Family of UVa student who died after being taken hostage by North Korea to receive $240,300 in seized bank funds

Nearly all employees in the Academic Division have received their first two doses and 85% have provided proof of a booster.

The Virginia Department of Health will stop contact tracing for every COVID-19 patient, acknowledging that it cannot continue in the face of astronomical case counts but embracing the fact that the practice is no longer effective.

Facing a lawsuit just days into his term over his executive order making masks optional for schoolchildren, Gov. Glenn Youngkin on Thursday night asked the Supreme Court of Virginia to dismiss the complaint.

One of the popular beaches along Cape Hatteras National Seashore is now sporting a 55-foot yacht as a tourist attraction.

Gov. Glenn Youngkin will appoint Carrie Roth to lead the Virginia Employment Commission, an embattled state agency that has struggled to process and pay almost two million claims for unemployment benefits in the COVID-19 pandemic.

Virginians with no symptoms should avoid using up the state's strained supply of COVID-19 tests, Gov. Glenn Youngkin said Thursday, as the state works to refocus its supply of tests to hospitals, nursing homes and schools.

St. Anne's-Belfield graduate Tessa Majors was killed in a 2019 robbery attempt near Barnard College where she was a freshman.

WATCH NOW: Bruce Miller sits down to talk with Oscar nominee Diane Warren about her success

Blinken: No concessions to Russia on Ukraine

Blinken: No concessions to Russia on Ukraine

Marijuana plants at a home in Virginia.