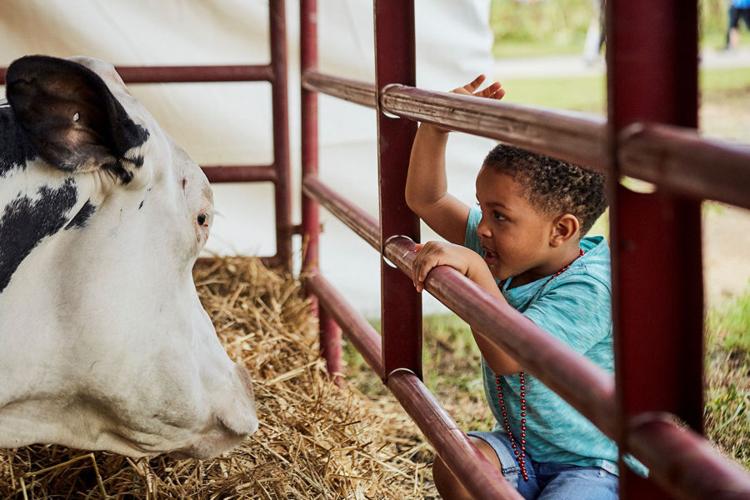 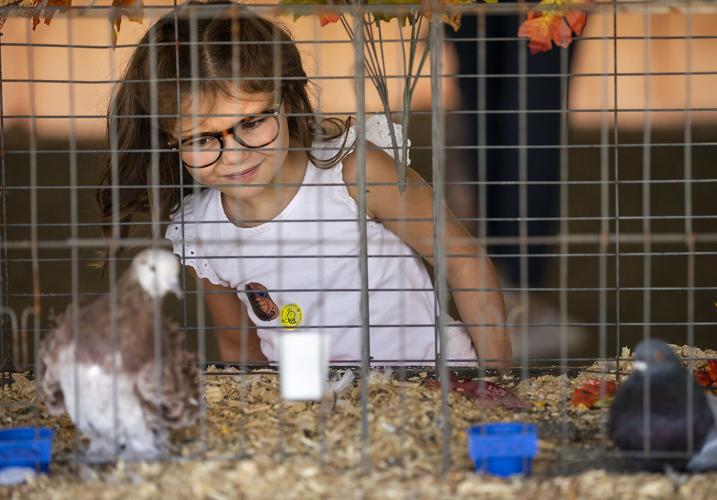 Riley Buchholz looks at a frillback pigeon in a livestock exhibit during last year's fair. 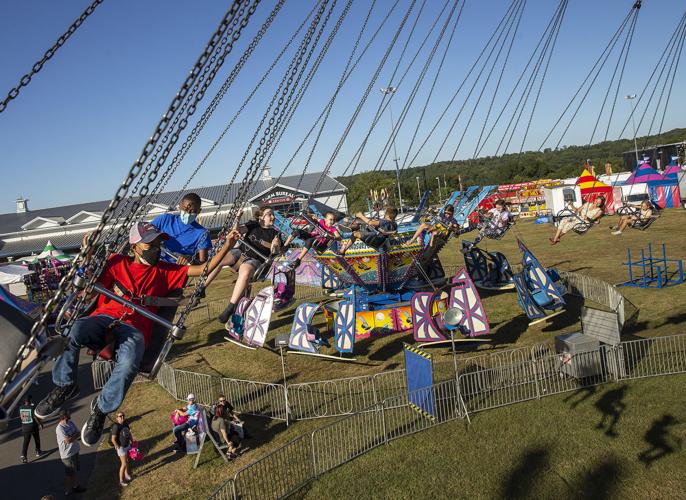 Children and adults take to the air aboard the Tornado ride at last year’s State Fair of Virginia, which launches this Friday. 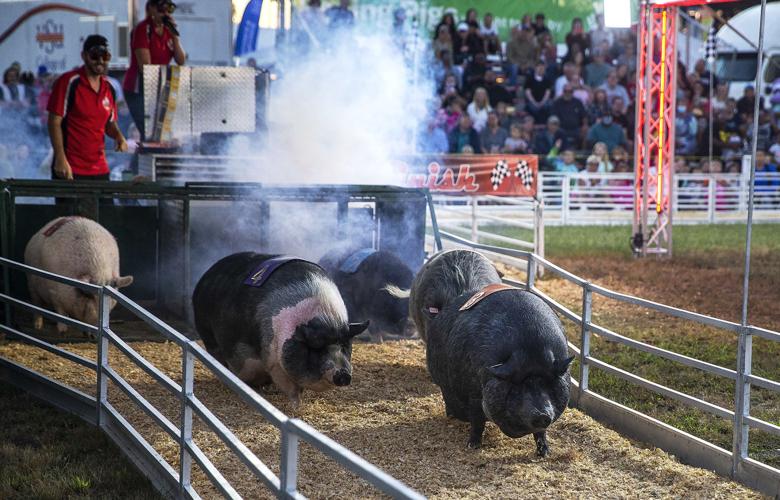 Pot-bellied pigs get off to a rambling start during pig races from Rosaire’s Royal Racers at the State Fair of Virginia. 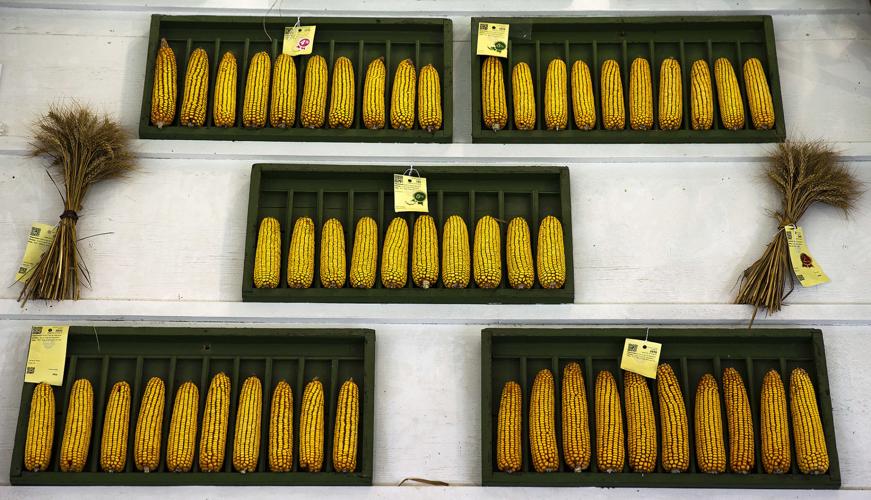 Produce awaits review in the 4-H and FFA Crops Judging area of the state fair, which is in full swing after a year off. 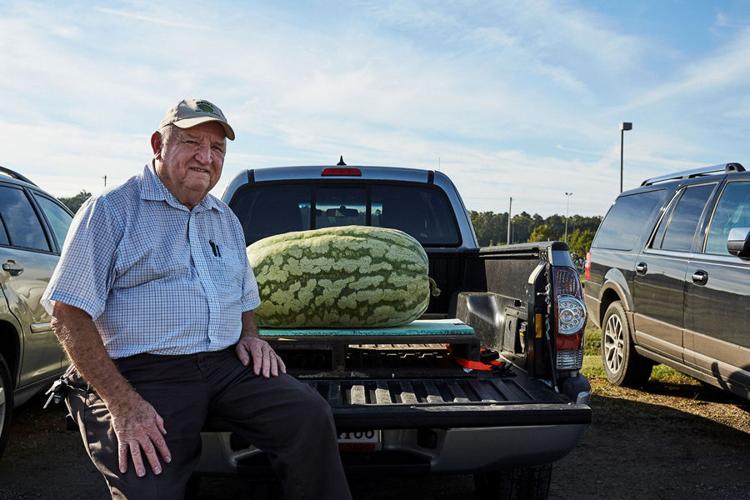 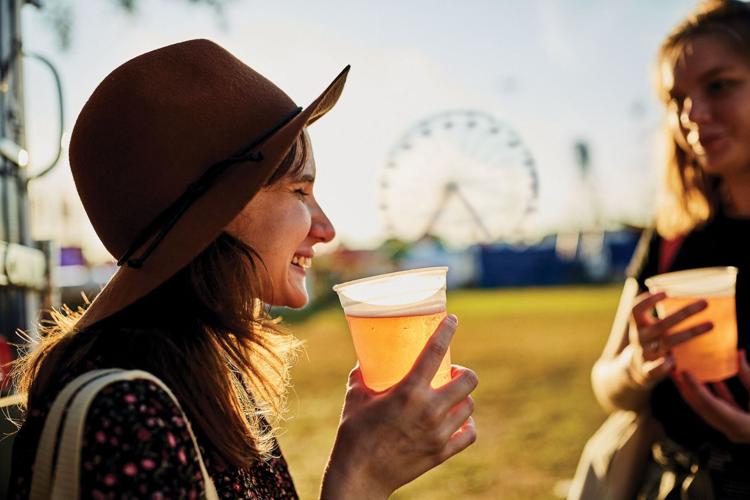 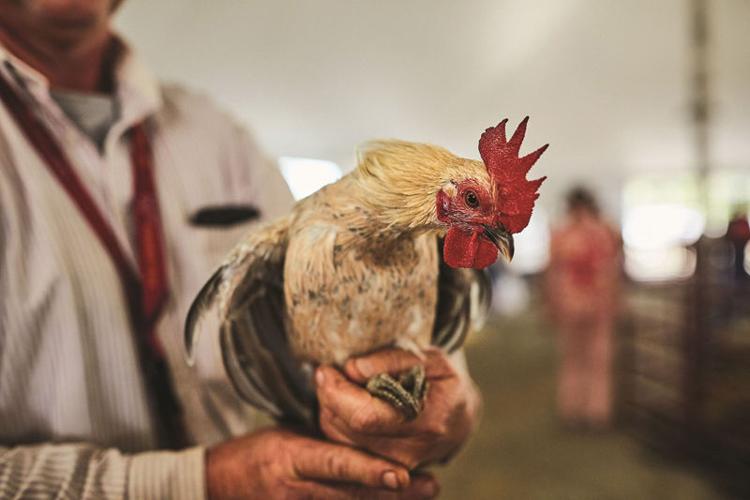 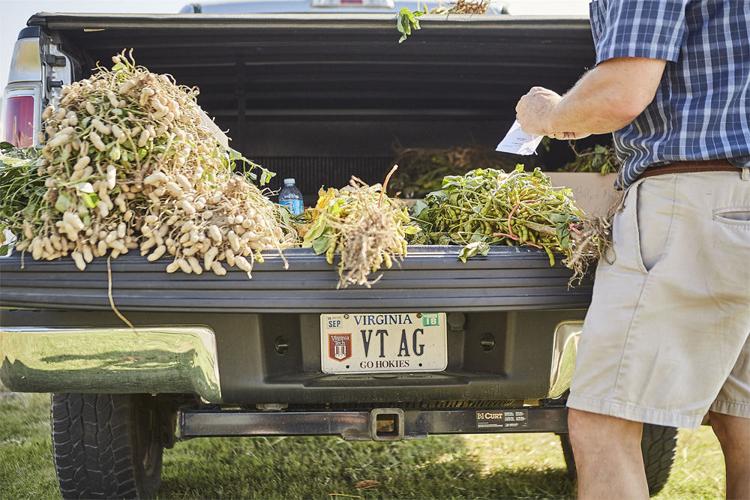 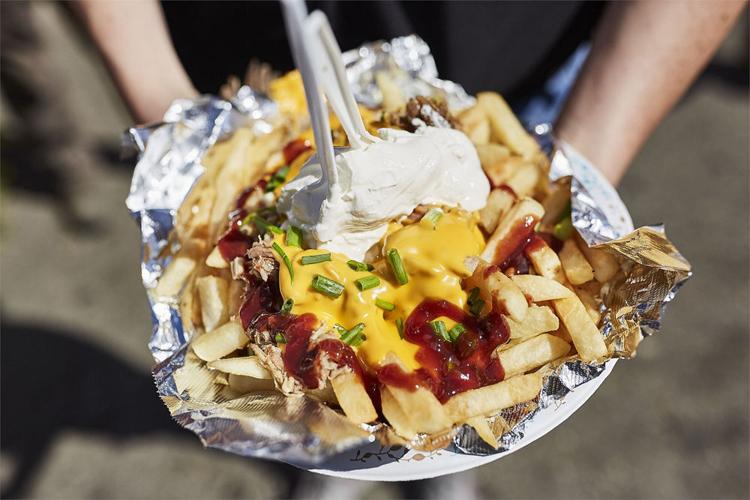 Get your body ready for all the fair’s over-the-top food options. 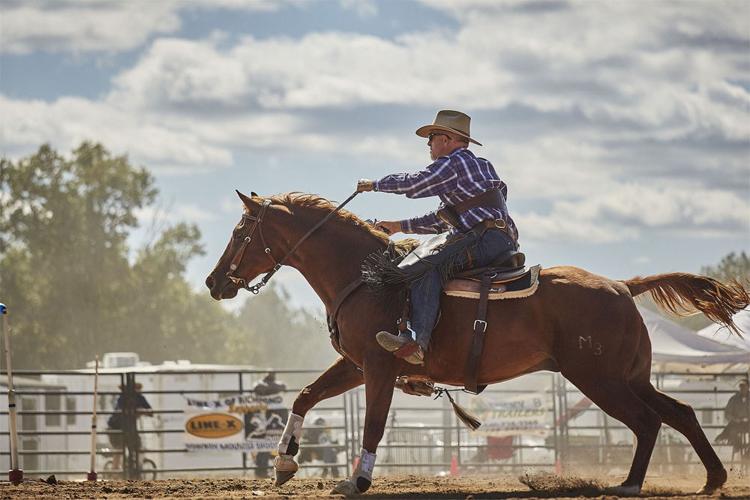 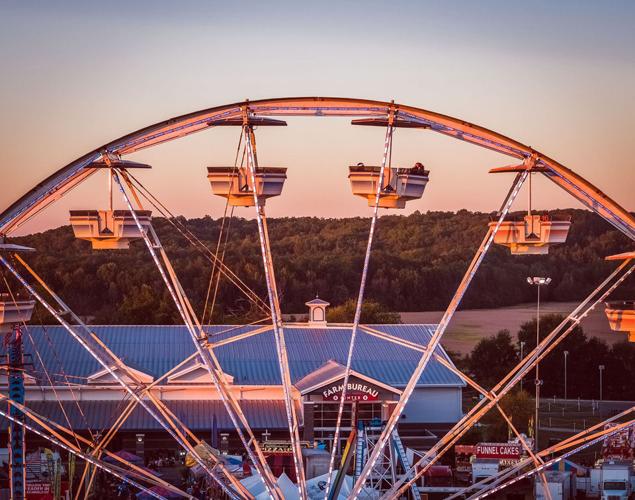 By LINDLEY ESTES FOR THE FREE LANCE–STAR

The State Fair of Virginia is going back to its roots when it returns to the Meadow Event Park in Caroline County this Friday.

The annual fair, which dates to 1854, is offering new and interactive ways to connect visitors to Virginia agriculture along with expanded live entertainment, rides, food, competitions and all the traditional programming Virginians have grown to know and love.

The fair’s manager of agriculture education, Sarah Jane Thomsen, noted that only 2 percent of Americans are directly involved with food productions on farms. But 100 percent of us eat, meaning there’s a disconnect between foodways and the table. There’s also a need to inspire the next generation of farmers, since not only are most farmers age 50–60 in the U.S., but most families are five generations removed from agriculture.

“Many kids have never seen a cow, or planted a seed,” she said. “We want to engage the youth and connect them to the story of agriculture.”

Along with milkshakes and dairy goods on offer, the fair’s Dairy Days will coincide with additional programming, which includes competitions, calf births and milking demonstrations. There will also be a milk mustache photo contest.

Thomsen also said school groups now have access to new interactive programs with the fair’s natural resource partners. For example, the Department of Marine Resources will show students how fish age with dissections and microscope slides. The Department of Historical Resources will show how sonar detects shipwrecks, and even more interactive classrooms are available with forestry and wildlife experts. Teachers only have to reach out to get this experience.

There is also wide range of agricultural programming for the public being offered in the family-focused Harvest Landing area, including Young MacDonald’s Farm with sliding ducks, hatching chicks and other farm animals.

Visitors will be able to see the products of farms and home gardens, including crops like corn, tobacco and wheat, in the horticulture tent. Of course, it wouldn’t be fall in Virginia without a giant pumpkin weigh-off, which in some years brings in gourds over 1,000 pounds. During the weigh-off on Saturday, guests can participate in an agricultural trivia game to win prizes.

Livestock is a big part of the fair, too. Youth will prepare to exhibit cattle, goats, sheep and swine during livestock shows that are part of the State Fair Youth Scholarship Program, and fairgoers are encouraged to visit the Sale of Champions on the fair’s second Saturday.

Expanded entertainmentWhile the fair has agricultural roots, it also has entertainment to appeal to every Virginian.

“We’re excited to offer over 350 hours of live entertainment in 2022,” said Marlene Jolliffe, the fair’s executive director. “All attractions are free with a paid gate admission.”

Musical performances will also take place nightly at 7:30. The live concert series features a variety of genres. Kicking off things Friday will be The BRENCORE Allstars Band, an ensemble from Washington, D.C., who perform Motown’s greatest hits.

The Frontmen will entertain fairgoers with their country music hits, as will country artist Priscilla Block. Bluegrass band Nu-Blu will play their hits, too.

Blake Guyre, who performs as “The Entertainer,” will present a tribute to piano legends Elton John and Billy Joel, and tribute band EagleMania will serve up the Eagles’ greatest hits. Rising star Ernest and the Junior Sisk Band are also part of the musical lineup.

New attractions include The FireGuy, who was recognized by the Guinness World Records for the most torches extinguished by fire-eating in 60 seconds, and the Otter Adventure, an interactive water show featuring curious, playful otters.

All of this programming is meant to reach a large audience. This year, for the first time, there is also a fully Spanish translation of the daily thrill guide on the State Fair’s website so more Virginians have access to the full map of attractions.

The State Fair runs through Oct. 2, and Jolliffe recommended visiting during the week to avoid the large weekend crowds—and to plan plenty of time to take in all that’s on offer this year, which also includes new food experiences.

This year’s fair also marks the first time since the dawn of the COVID-19 pandemic that the fair is operating fully, without restrictions.

“It’s far more normal, the atmosphere, this year,” she said. “We have a larger pool of vendors and attractions for people to enjoy. Though, we are still working to make the layout of the fair safe and have plenty of handwashing stations throughout the grounds.”

A truck driver died in a fiery NC wreck on I-85. Now, a Virginia mother is missing.

A Virginia mother of two is missing, and her family said Friday they think she might have died in a fiery wreck on Interstate 85.

Worker was dead in S.C. department store bathroom for 4 days

Authorities say a 63-year-old worker died in the public bathroom of a South Carolina department store, but her body was not discovered for four days.

Parents plead guilty in death of their 25-day-old baby

As of 4:35 p.m. Tuesday, the Department of Education had received 19,506 public comments about the policies, a majority in opposition to the proposed guidelines. The 30-day public comment period opened on Monday.

Whoever has the winning ticket has 180 days from the drawing date to claim the prize.

Two people have died in Virginia from complications of meningococcal disease — which is linked to meningitis and sepsis — as Hampton Roads faces what health officials say is a “community outbreak” of the disease.

Hard Mtn Dew, the new alcoholic beverage from Mountain Dew, is now available in Virginia — one of the few states to carry it.

Youngkin stresses the importance of finding a new chancellor, the need for more short-term credential programs and expanding dual-enrollment for high school students and maintaining affordability.

The parents of a 25-day-old baby who died last year as the result of exposure to methamphetamine both pled guilty to felony murder Tuesday in Spotsylvania Circuit Court.

VDOT and DMV want to focus attention on impaired driving, speeding and seat belt use - some of the biggest sources of accidents resulting in death or serious injury.

Riley Buchholz looks at a frillback pigeon in a livestock exhibit during last year's fair.

Children and adults take to the air aboard the Tornado ride at last year’s State Fair of Virginia, which launches this Friday.

Pot-bellied pigs get off to a rambling start during pig races from Rosaire’s Royal Racers at the State Fair of Virginia.

Produce awaits review in the 4-H and FFA Crops Judging area of the state fair, which is in full swing after a year off.

Get your body ready for all the fair’s over-the-top food options.