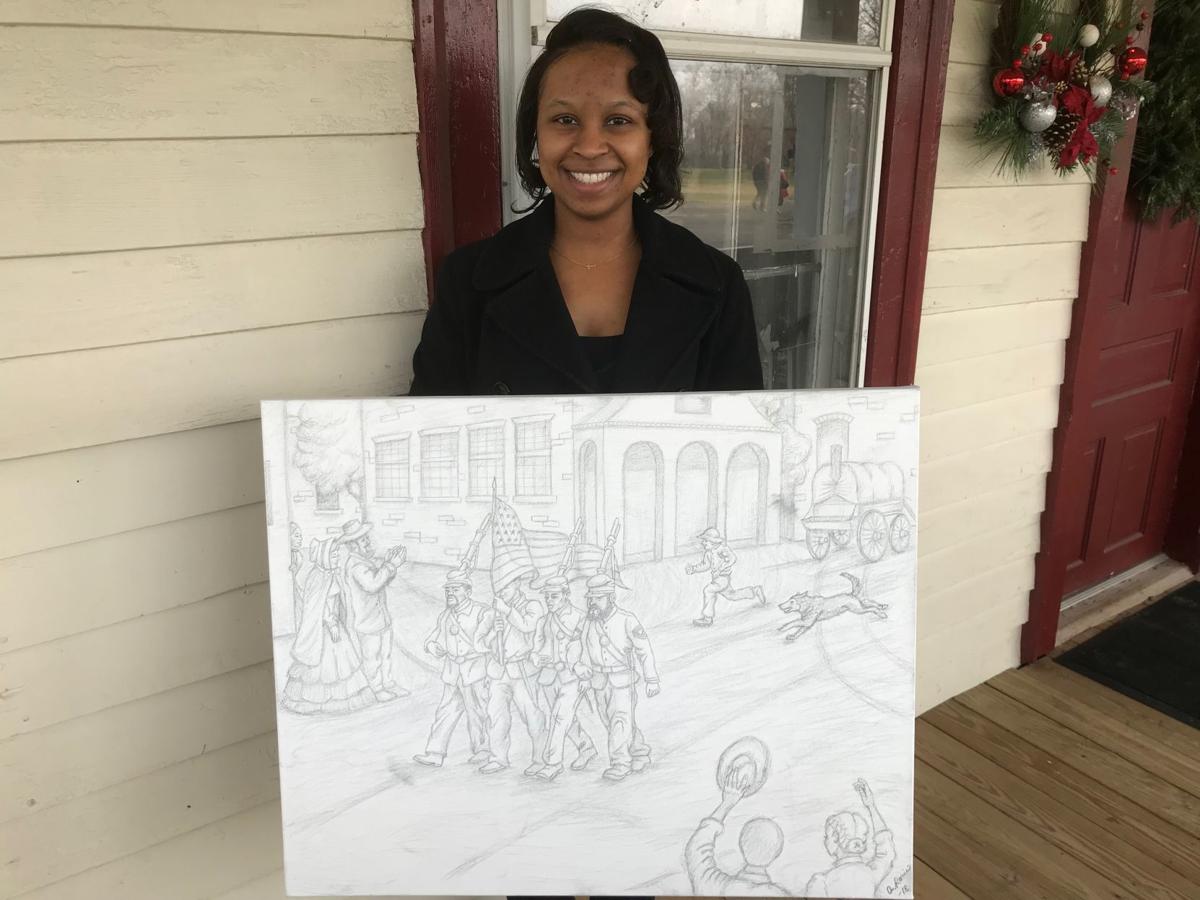 On the porch of the Graffiti House museum in Brandy Station, artist Ashley Rorie holds one of her artworks for the Brandy Station Foundation that depict United States Colored Troops marching through the village of Culpeper Courthouse in early May 1864. 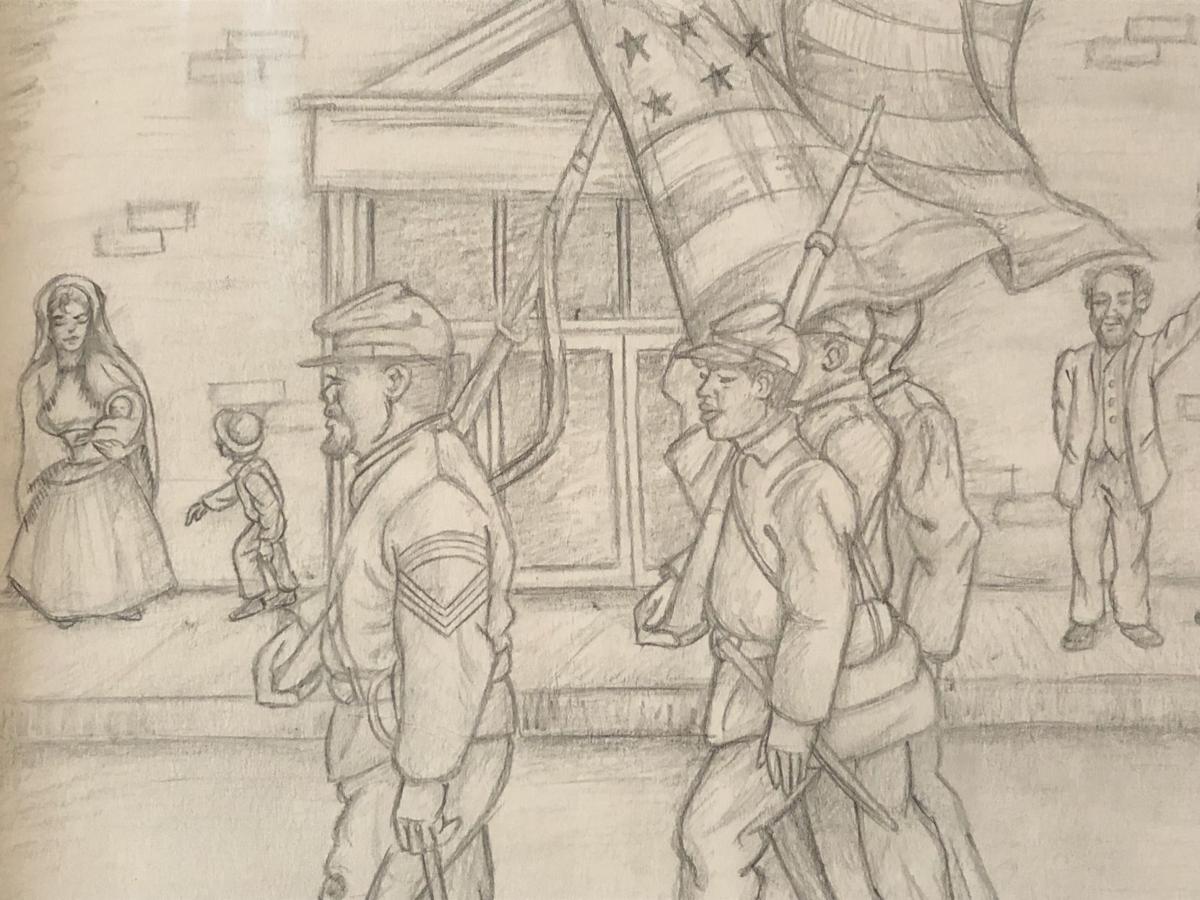 The artist’s rendering of African-American soldiers as they march past onlookers in the village of Culpeper near the Courthouse in May 1864, as Lt. Gen. Ulysses S. Grant begins his Overland Campaign, one of the Civil War’s final chapters. 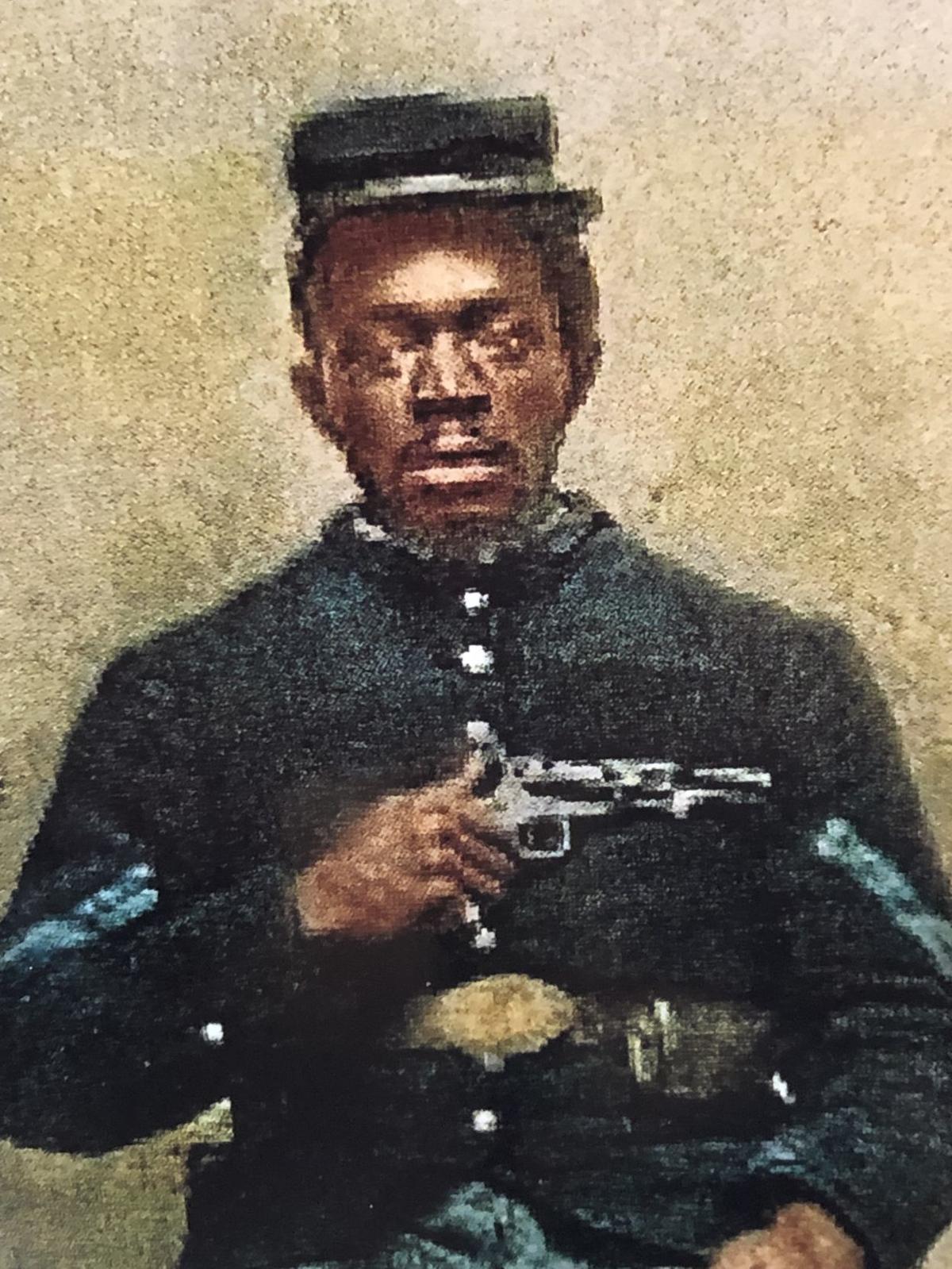 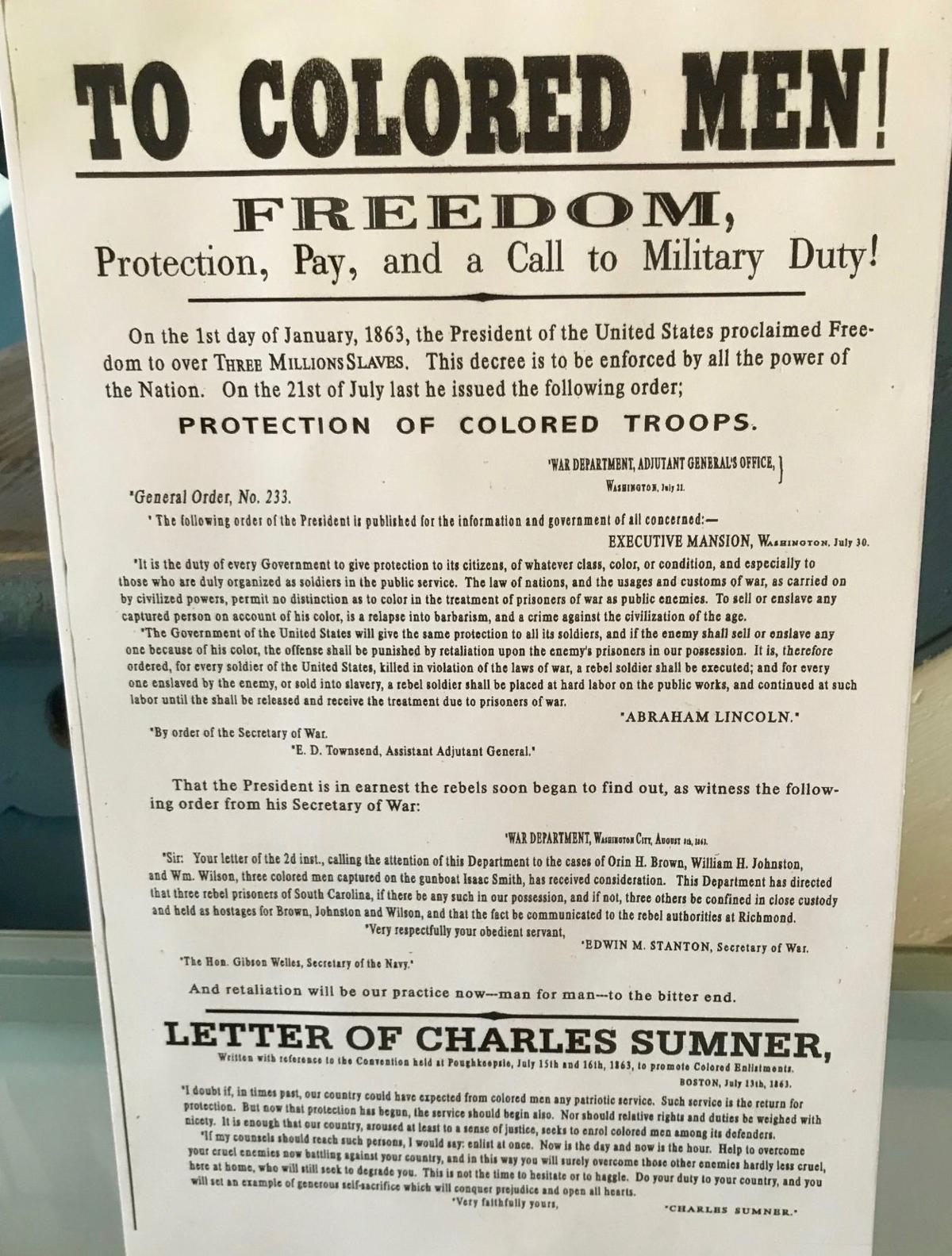 A July 1863 recruitment poster notes President Lincoln issued orders warning that the Union will retaliate for every U.S. soldier who Confederate authorities killed, sold or enslaved. 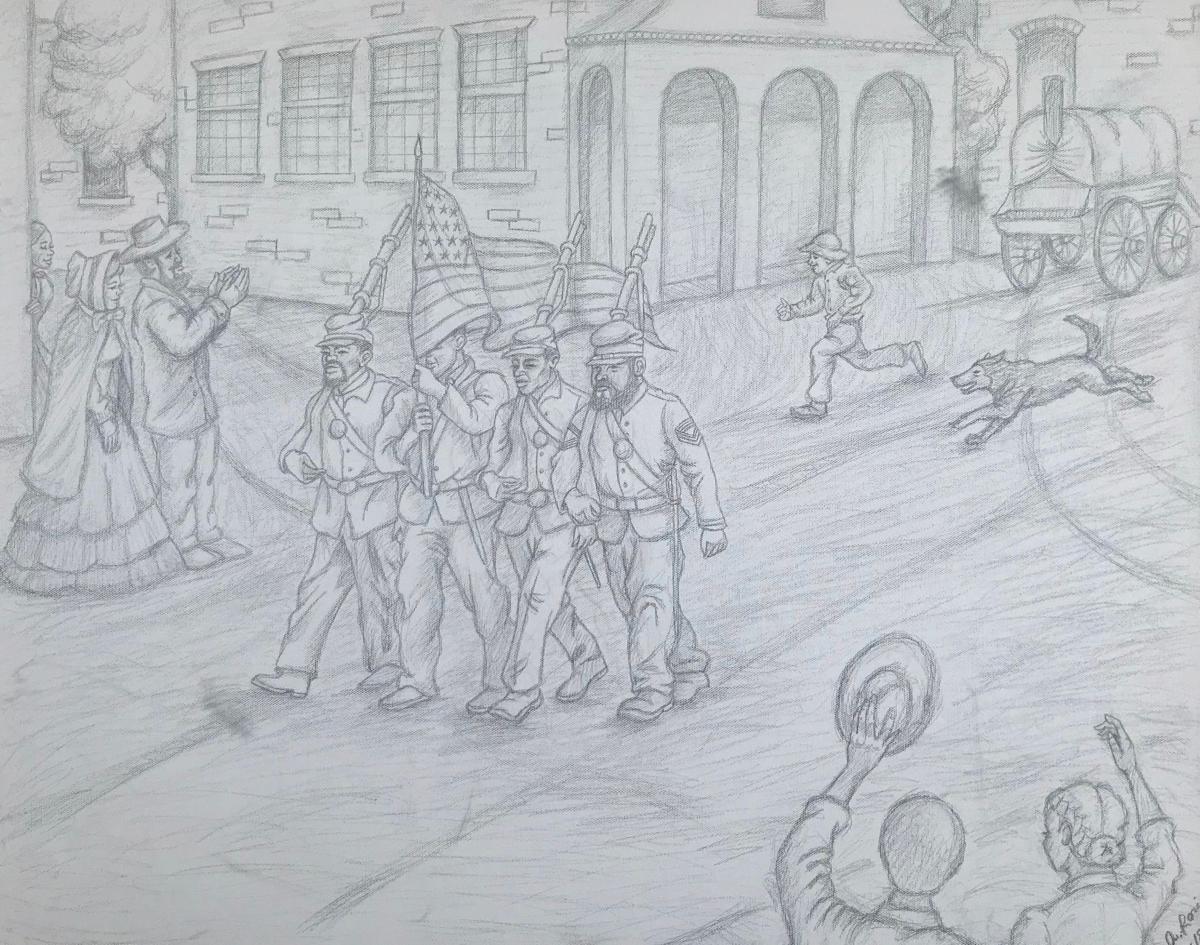 African-American soldiers march past the Culpeper Courthouse in early May 1864 as their division links up with the Union's Army of the Potomac. 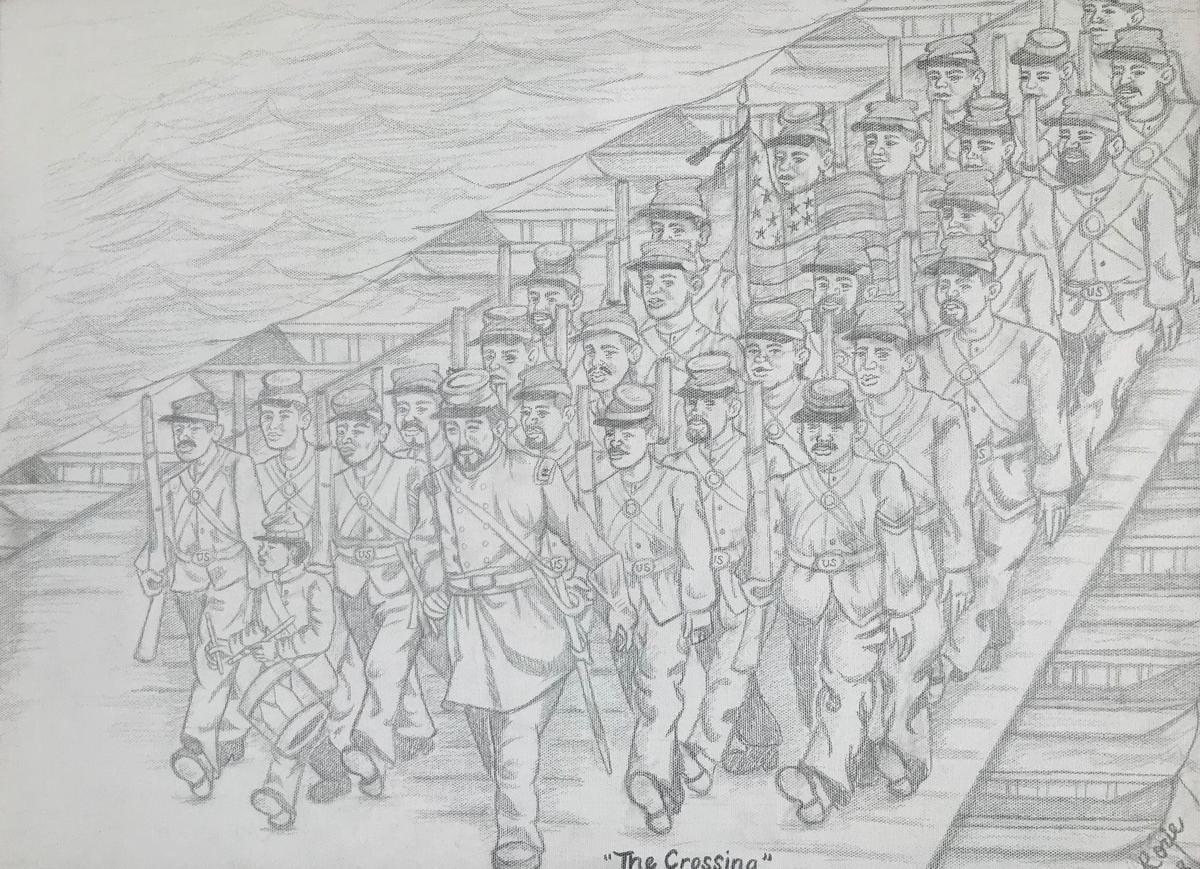 As winter approaches spring in the Culpeper area, historically minded people’s thoughts may turn to the events of 155 years ago. When the mud dried and the roads grew passable, the Union and Confederate armies prepared to march through Central Virginia.

That fact is well-trod ground. Many thousands of people the world over know of the first clashes between the men of Gens. Robert E. Lee and Ulysses S. Grant in the Wilderness and Spotsylvania during the American Civil War.

But few know that black soldiers were part of Grant’s infantry column, and that they—unexpectedly—distinguished themselves here.

“That’s not something that is widely known,” Culpeper County native Howard Lambert, a historian, said in an interview. “African-American men born here but who had left came back to Culpeper to fight as soldiers in the Union’s Army of the Potomac. And they didn’t just put on the uniform. They saw serious combat.”

Thousands of United States Colored Troops crossed into Culpeper at Kelly’s Ford in early May as Grant’s force began moving south to engage Lee’s army. Among these men were dozens from Culpeper, some whom were born into slavery, escaped to freedom, and returned to the Confederacy to do their duty as U.S. soldiers.

“Imagine: These men came back to Virginia knowing that if they were captured, they would be killed,” Lambert said. “The stakes were a lot higher for African-Americans than for other Union troops.”

The reason for that certainty? Confederate President Jefferson Davis issued his General Order No. 111, equating black soldiers in the Union army with slaves in revolt. That meant Confederate soldiers could treat African-Americans in federal uniform as rebellious slaves, meaning in any way they saw fit, including summary execution on the battlefield.

The South had long been gripped by fear of slave revolts. So the policy of Davis’ government was to deny black Union soldiers the customary protections accorded enemy troops.

In a proclamation issued in Richmond on Dec. 24, 1862, Davis ordered that “all negro slaves captured in arms” be handed over to state authorities and that the same be done to all commissioned officers “found serving in company with armed slaves in insurrection.”

The 1989 feature film “Glory” dramatized part of the larger story, that of the 54th Massachusetts Volunteer Infantry, the first black regiment officially recruited under War Department authority. Capt. Robert Gould Shaw of Massachusetts, who was then stationed in Stafford County, initially hesitated to accept command of the 54th because of Davis’ proclamation.

And yet, Shaw accepted that commission and some 179,000 African-American men entered the Union ranks. By war’s end, the army’s 175 USCT regiments constituted one-tenth of the entire army’s manpower.

Lincoln, whose Emancipation Proclamation of Jan. 1, 1863, enabled black men to serve in the army, saw black soldiers as a key to victory.

In August 1863, the president wrote Grant that he believed soldiers of African descent were “a resource which if vigourously applied now, will soon close the contest.” Grant replied that he agreed. “[B]y arming the negro, we have added a powerful ally,” he wrote Lincoln.

In the spring of 1864, Grant came east, accepted command of all the Union armies, and took up residence in Culpeper County, where the nation’s best outfit—the vaunted Army of the Potomac—had been encamped all winter. Early that May, he and Maj. Gen. George G. Meade launched the fateful Overland Campaign from Culpeper.

On May 5, 3,100 black soldiers in Brig. Gen. Edward Ferrero’s Division of Maj. Gen. Ambrose Burnside’s Ninth Corps linked up with the army at Kelly’s Ford on the Rappahannock. These men crossed the river on a pontoon bridge built expressly for them by the army’s engineers, historian Clark B. Hall has noted.

Ten days later, some of those black troops—who commanders had assigned to protect the army’s wagon trains in the rear—unexpectedly experienced their first combat.

Some of those soldiers were born in Culpeper County, and had left Virginia. Local historian Zann Nelson, after years of research, has documented that dozens and dozens of black troops were Culpeper natives.

“We don’t know how many of these colored troops had been slaves,” Lambert said. “We don’t know when they left Culpeper. But they had experienced servitude.

“They had seen Culpeper’s farmland, doing manual labor in its fields, and seen the Rappahannock before,” Lambert said. “Now they were coming back as free men, wearing Union uniforms with the eagle [breastplate] on their chest, for the purpose of fighting for freedom for all. That’s a pretty big message.”

To depict these events, Lambert asked Loudoun County artist Ashley Rorie to create historically accurate drawings of the black soldiers crossing on the pontoon bridge at Kelly’s Ford and marching through the village of Culpeper Courthouse as civilians watched.

These events were not part of Virginia’s past that Rorie learned in the state’s public schools, she said.

Rorie said she used pencil for her drawings to stay faithful to the pencil sketches drawn in Virginia by Union war correspondents, which are now preserved in the Library of Congress and other archives.

“It’s some sad history, but I’m really excited about it,” Rorie said. “The public thinks of how African-Americans were treated harshly during slavery. But they don’t consider that they also fought as part of the Union army.”

One such unit in Ferrero’s division was the 23th Regiment, United States Colored Troops, organized at Camp Casey, Virginia—now the site of the Pentagon. The 23rd USCT was one of Ferrero’s lead units, Lambert said. At least 12 of its members identified Culpeper as the place of their birth.

After the Battle of the Wilderness on May 5-7, 1864, when it was called forward from Chancellorsville to aid Ohio cavalrymen under attack in Spotsylvania, the 23rd made history.

An Ohioan wrote, “It did us good to see the long line of glittering bayonets approach, although those who bore them were Blacks, and as they came nearer they were greeted by loud cheers,” according to an account unearthed by author and historian Gordon C. Rhea.

“This small engagement has huge symbolic importance,” National Park Service historian Noel Harrison wrote of the event. “It was the first directed combat between Union African American soldiers ... and Confederates in the Army of Northern Virginia.”

The 23rd went on to fight at Petersburg in that summer’s infamous Battle of the Crater, where the regiment suffered the most casualties of all of the black regiments in the battle.

Count the artist’s own family members as among those startled to realize that, during the Civil War, black Virginians returned to the commonwealth to serve their nation.

“I think the exhibit is great, and very interesting,” Leesburg resident Aaron Rorie Sr., Ashley’s father, said of the Graffiti House display. “It’s a pleasant surprise to learn that Union soldiers came from Culpeper County. All these years in the area, and I never knew that.”

The family’s ties to Culpeper are decades old. Aaron’s father—Glen L. Rorie Sr.—has been the pastor of Spiritual Tidings Bibleway Church in the county since 1961.

“It’s a good initiative that someone took the time to create this kind of display, to make sure that this history isn’t lost,” Aaron Rorie said. “It has really started something.”

Lambert said he hopes a museum or gallery will provide a home for the largest of Rorie’s largest pieces, that of USCTs crossing the Rappahannock.

One man in the 23rd left the infantry and joined the Union navy, he noted. Another man from the unit joined the army’s 9th Cavalry and became a “buffalo soldier” in the West.

“Who were these people?” Lambert said. “What did they do? And where did they end up? They had families, wives and children. Each one of them is a fascinating story. And there’s more to come.”

As discoveries arise, Lambert said he anticipates making changes to the USCT exhibit. The Graffiti House, now closed for the winter, will reopen in March.

On the porch of the Graffiti House museum in Brandy Station, artist Ashley Rorie holds one of her artworks for the Brandy Station Foundation that depict United States Colored Troops marching through the village of Culpeper Courthouse in early May 1864.

The artist’s rendering of African-American soldiers as they march past onlookers in the village of Culpeper near the Courthouse in May 1864, as Lt. Gen. Ulysses S. Grant begins his Overland Campaign, one of the Civil War’s final chapters.

A July 1863 recruitment poster notes President Lincoln issued orders warning that the Union will retaliate for every U.S. soldier who Confederate authorities killed, sold or enslaved.

African-American soldiers march past the Culpeper Courthouse in early May 1864 as their division links up with the Union's Army of the Potomac.