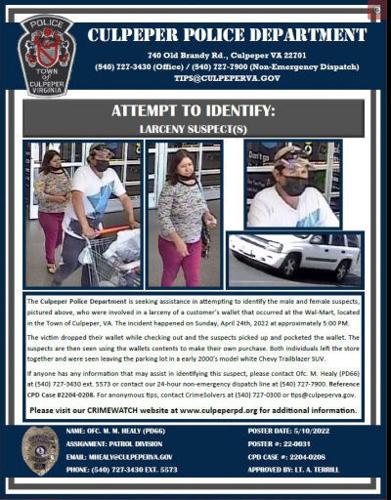 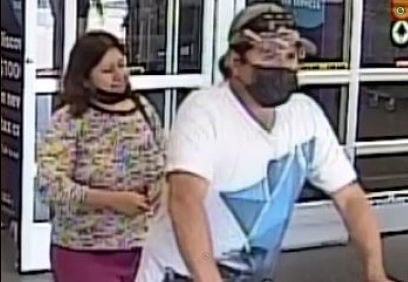 Culpeper Police are seeking to ID this couple they say was involved in a larceny at the local Walmart.

Culpeper Police have identified a pair of Walmart customers they say picked up another customer’s wallet off the floor then used its contents to check out.

A man and woman were suspected of larceny in the reported incident at approximately 5 p.m. on Sunday, April 24, according to a news release on social media Tuesday. They had been identified by Wednesday afternoon.

In the reported incident, another Walmart shopper dropped their wallet while checking out and the man picked up and pocketed the wallet, police say.

The couple was then seen using the contents of the wallet to make their own purchase, according to video evidence.

The man and woman left the store together and were seen leaving the parking lot in an early 2000s white Chevy Trailblazer SUV, police said.

Recently, there’s been a slight increase in offenders ignoring loss prevention employees when walking out of the store. Most cooperate with loss prevention so investigations are otherwise closed quite quickly, she said.

“However, the increased attention on our social media is that we’re sharing more of these cases with the community,” Cole said. “The public has been wonderfully responsive when it comes to helping us identify offenders and close our investigations.”

Winchester woman dies from injuries in Fauquier crash on Saturday

Spotsylvania detectives are investigating an incident last week in which a county man was brutally beaten and robbed of various items, includi…

Ashley Judd and her family wanted the world to hear from them how Naomi Judd died. The younger Judd shared the cause of death on "Good Morning America."

A 60-year-old man who strangled his girlfriend died of a heart attack while burying her body in their South Carolina backyard, investigators said.

WILSONS—Soon after Jim Medeiros bought his 143-acre cattle and poultry farm in rural Virginia a decade ago, he and his wife were startled by t…

A woman's voice — which authorities say is Vicky White's — is heard saying things including, "wait, stop ... airbags going to go off and kill us."

Culpeper Police are seeking to ID this couple they say was involved in a larceny at the local Walmart.