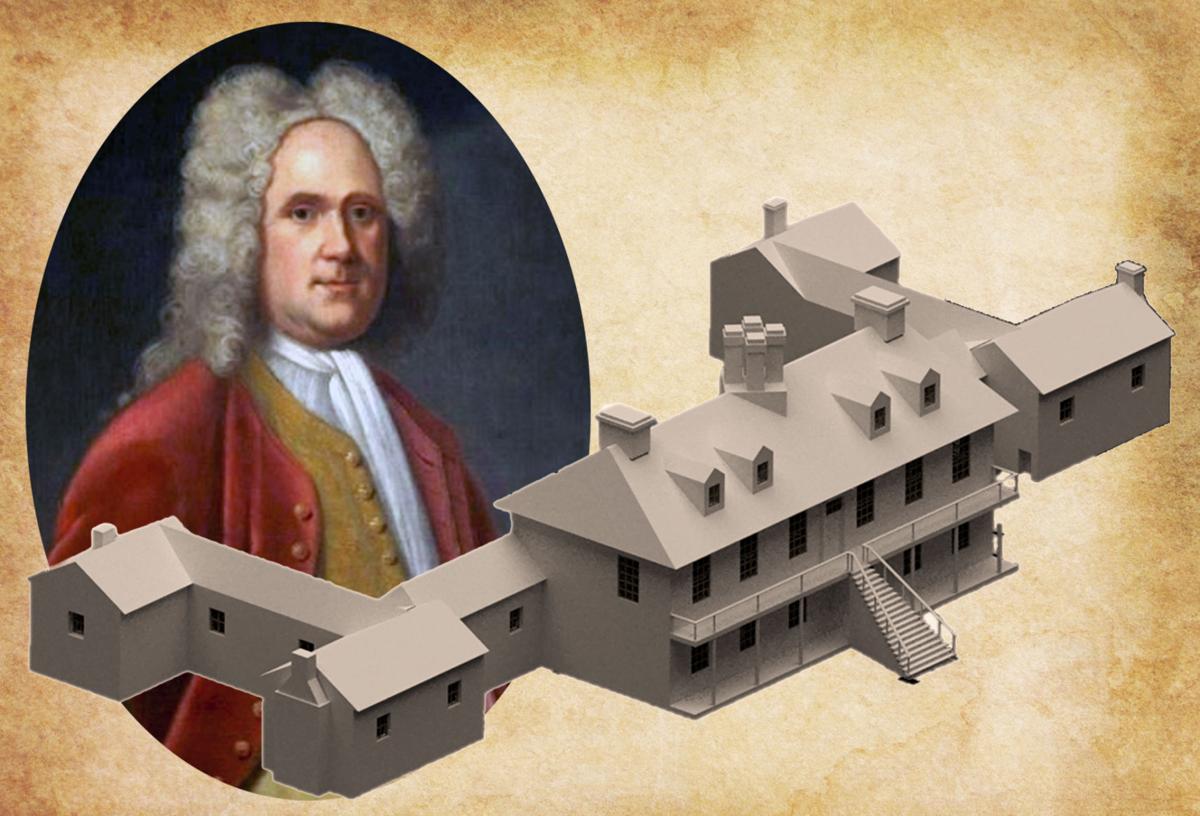 Virginia Lt. Gov. Alexander Spotswood’s portrait adjoins a 3-D rendering of the ‘Enchanted Castle,’ the palatial Colonial home Spotswood built of stone and brick to anchor his 80,000-acre inland empire. The village beside his home became the courthouse seat of Spotsylvania County, named for him. 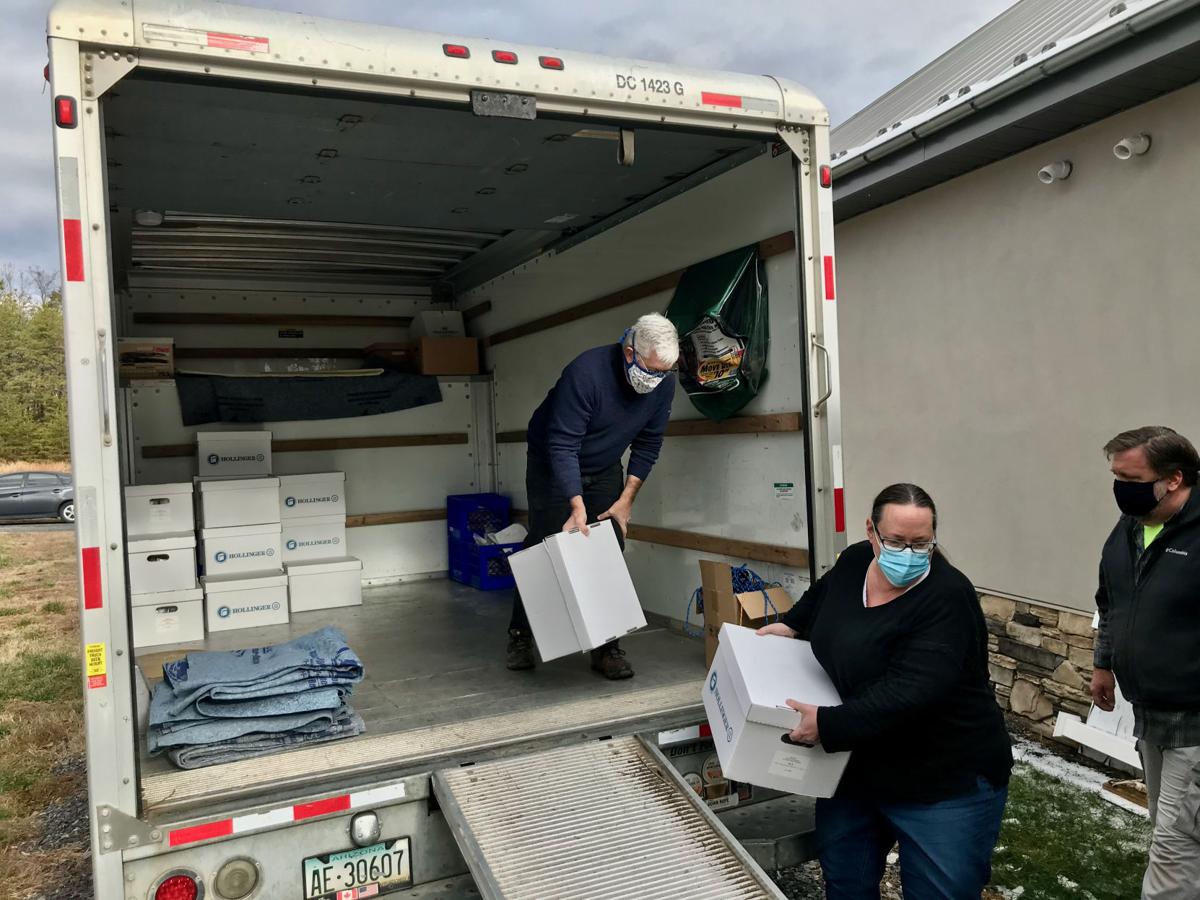 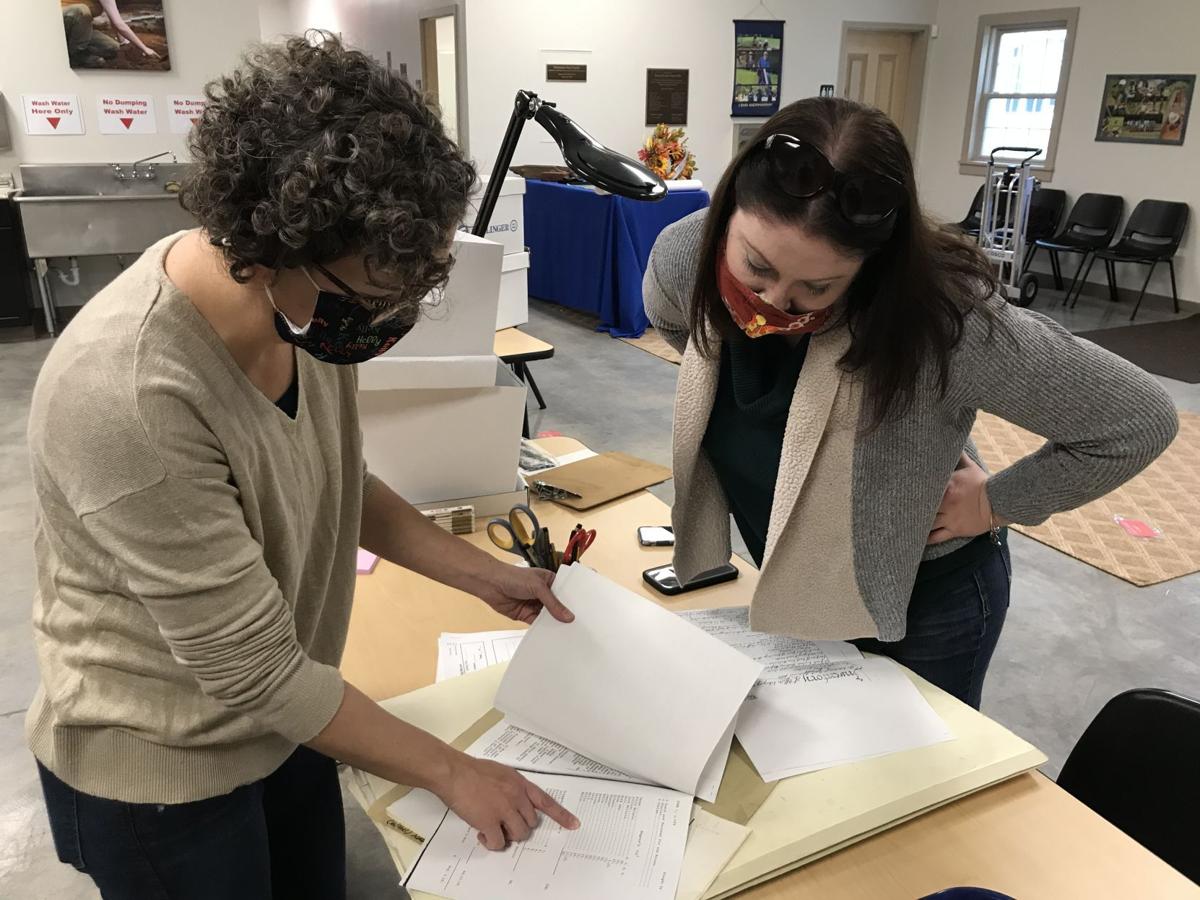 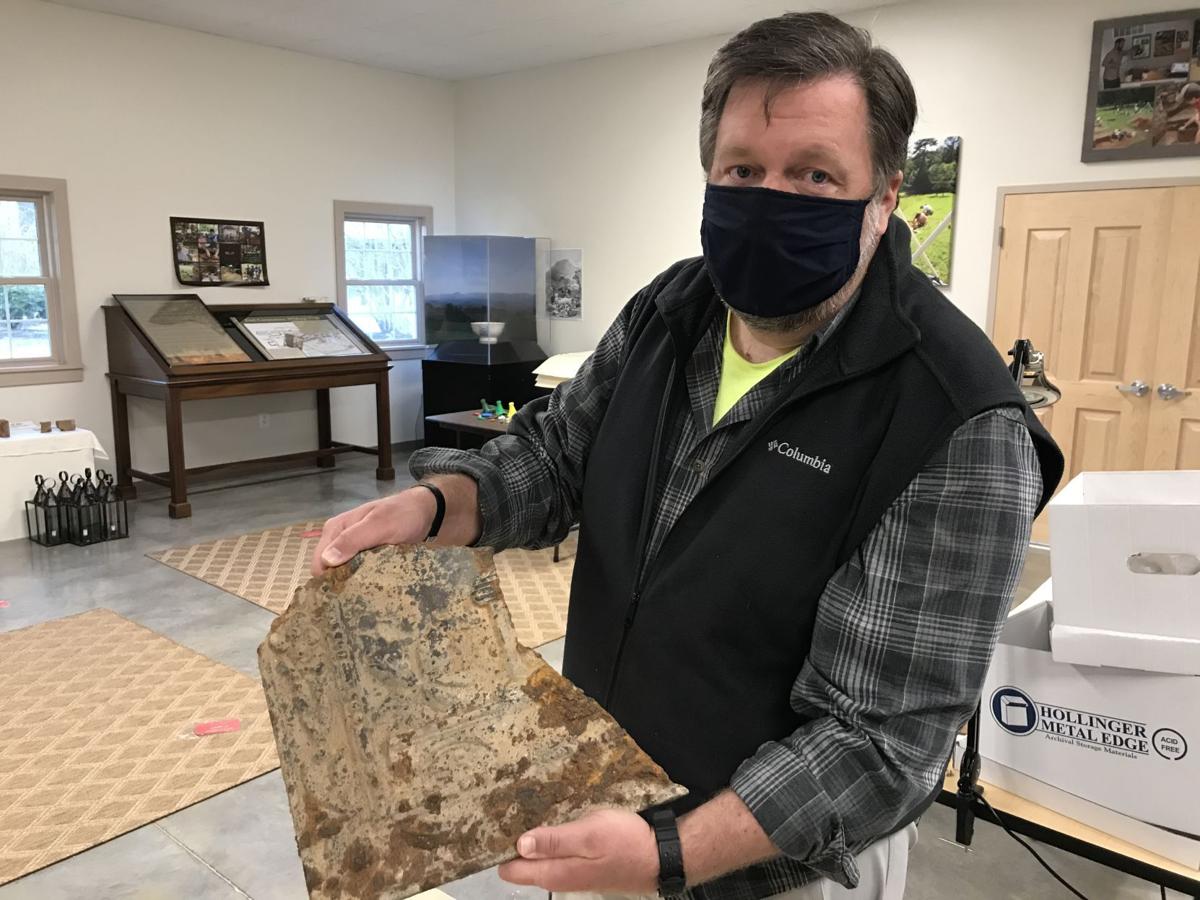 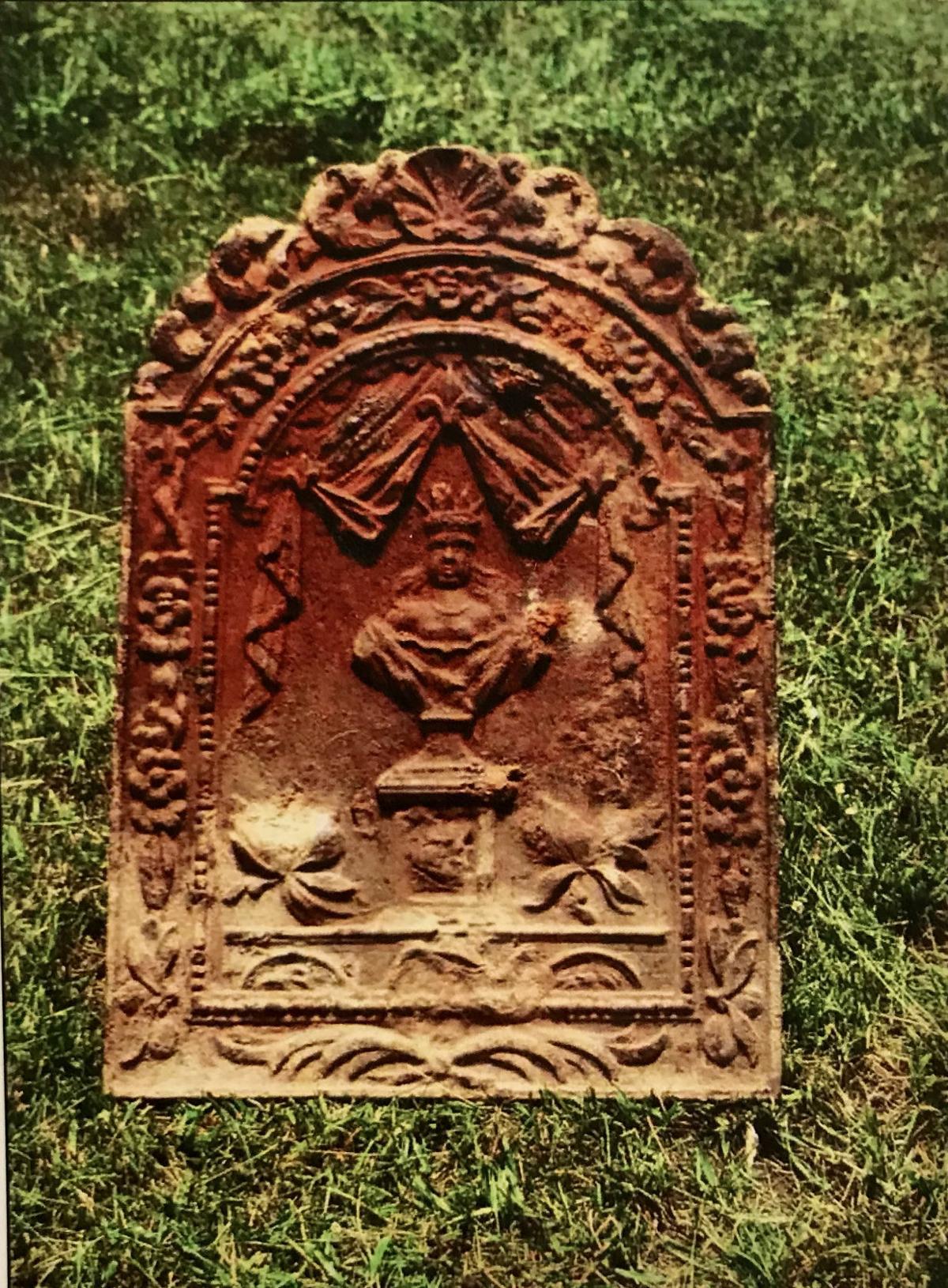 This fireback was excavated decades ago from the site of Gov. Alexander Spotswood’s mansion in Orange County. Today, it is exhibited in Richmond by the Virginia Museum of History and Culture. 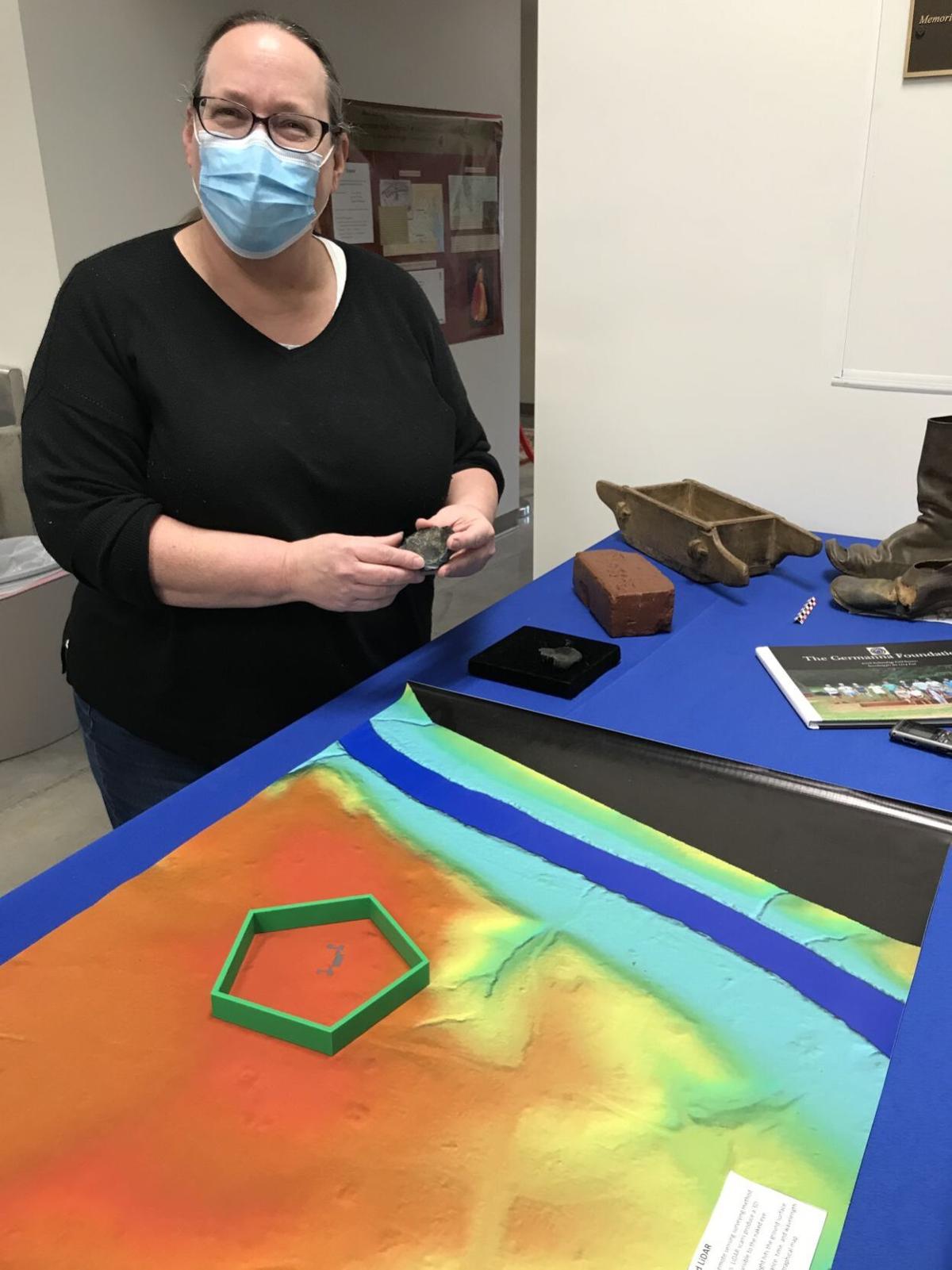 State Archaeologist Elizabeth Moore holds a Colonial artifact beside a LIDAR image of the royal governor’s Fort Germanna and Enchanted Castle sites near the Rapidan River. 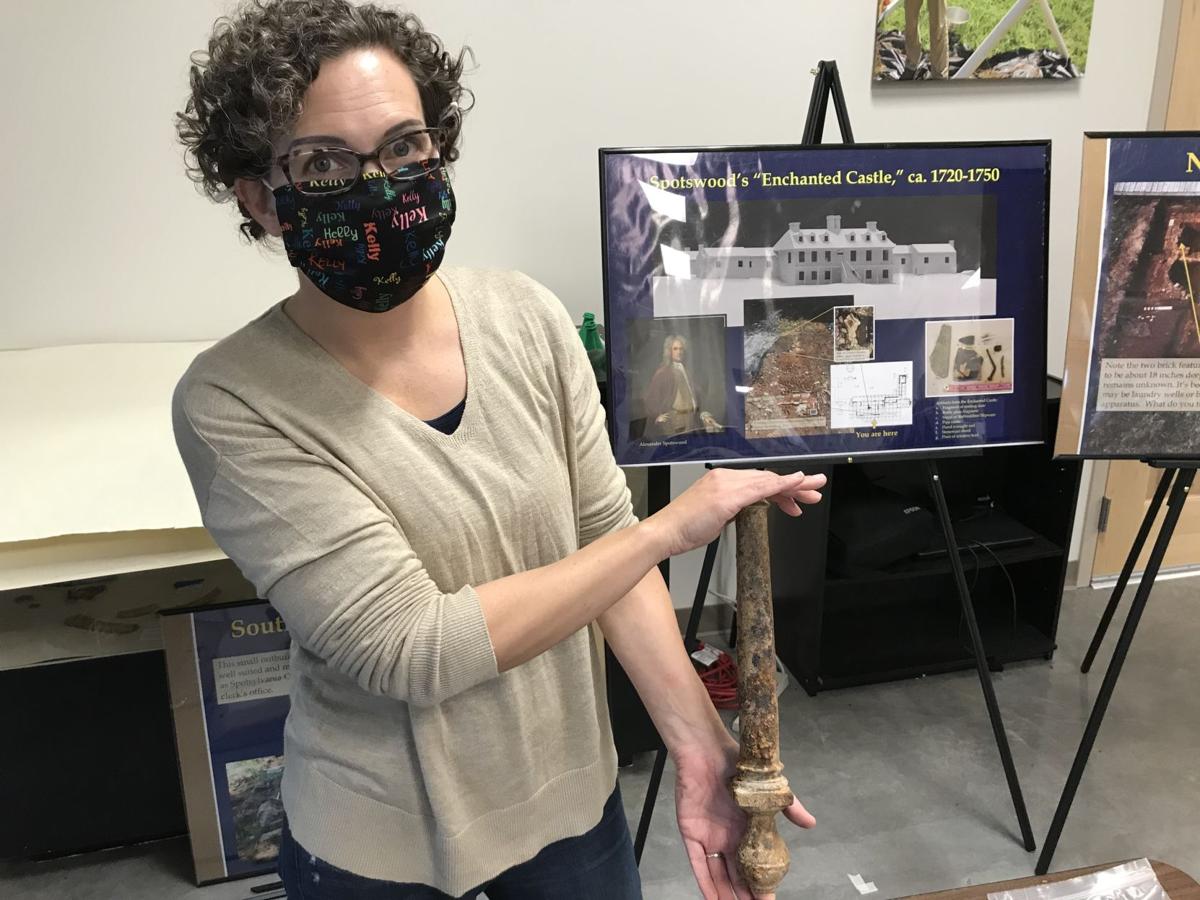 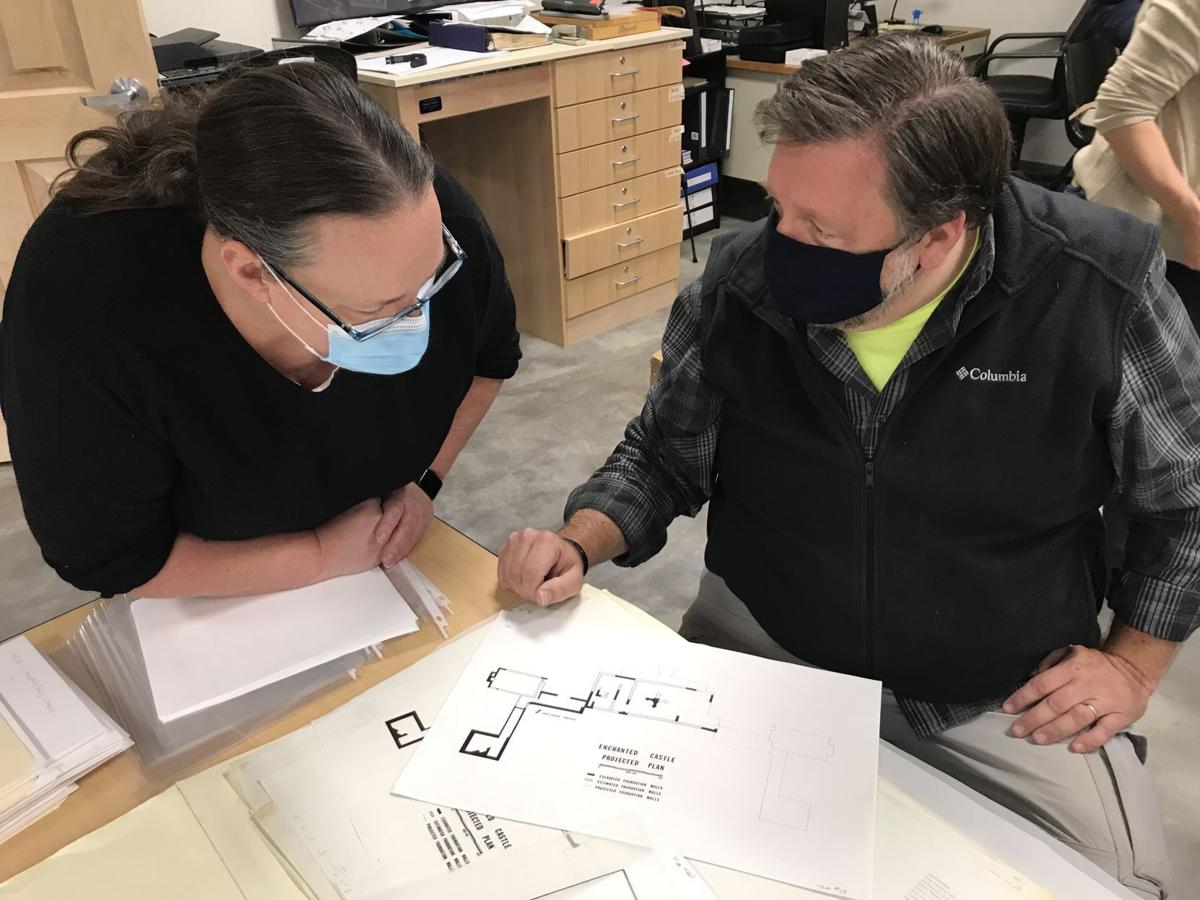 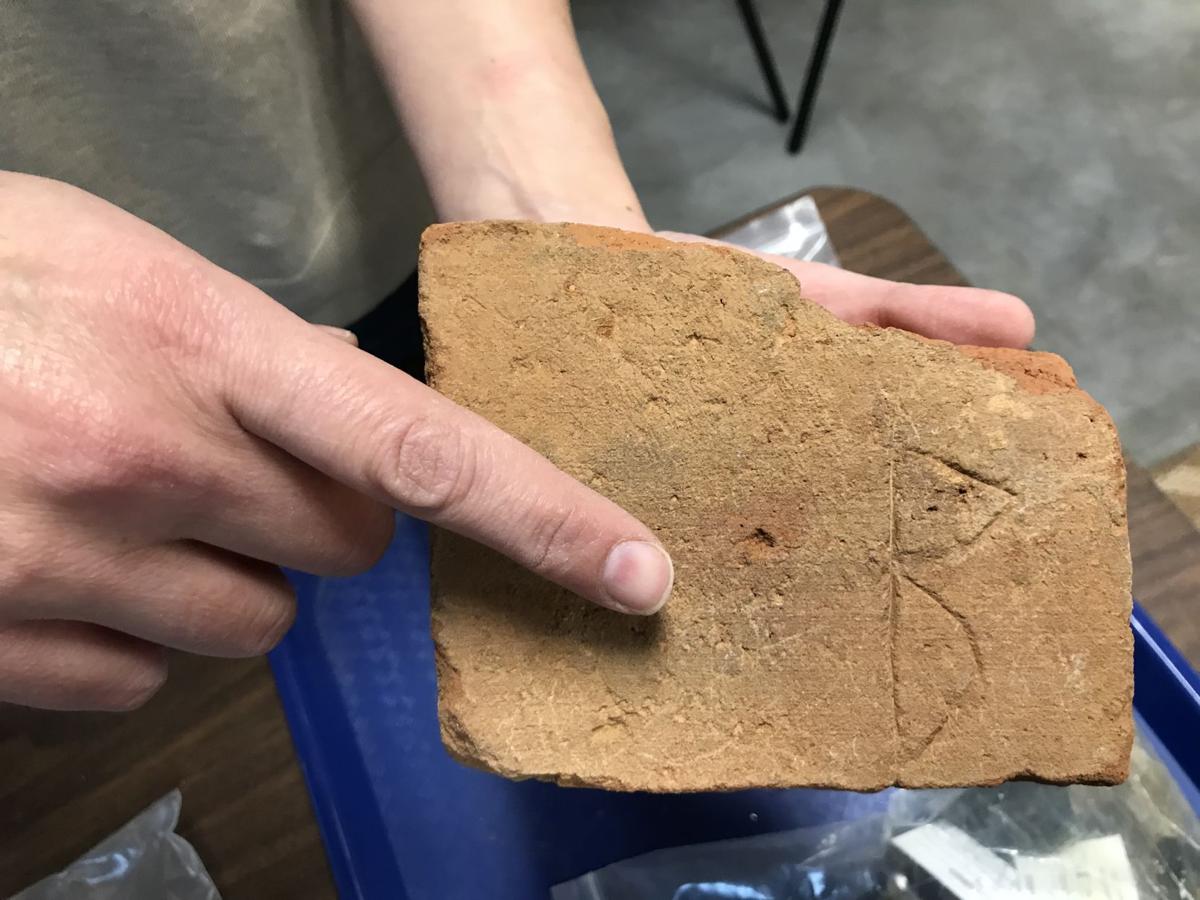 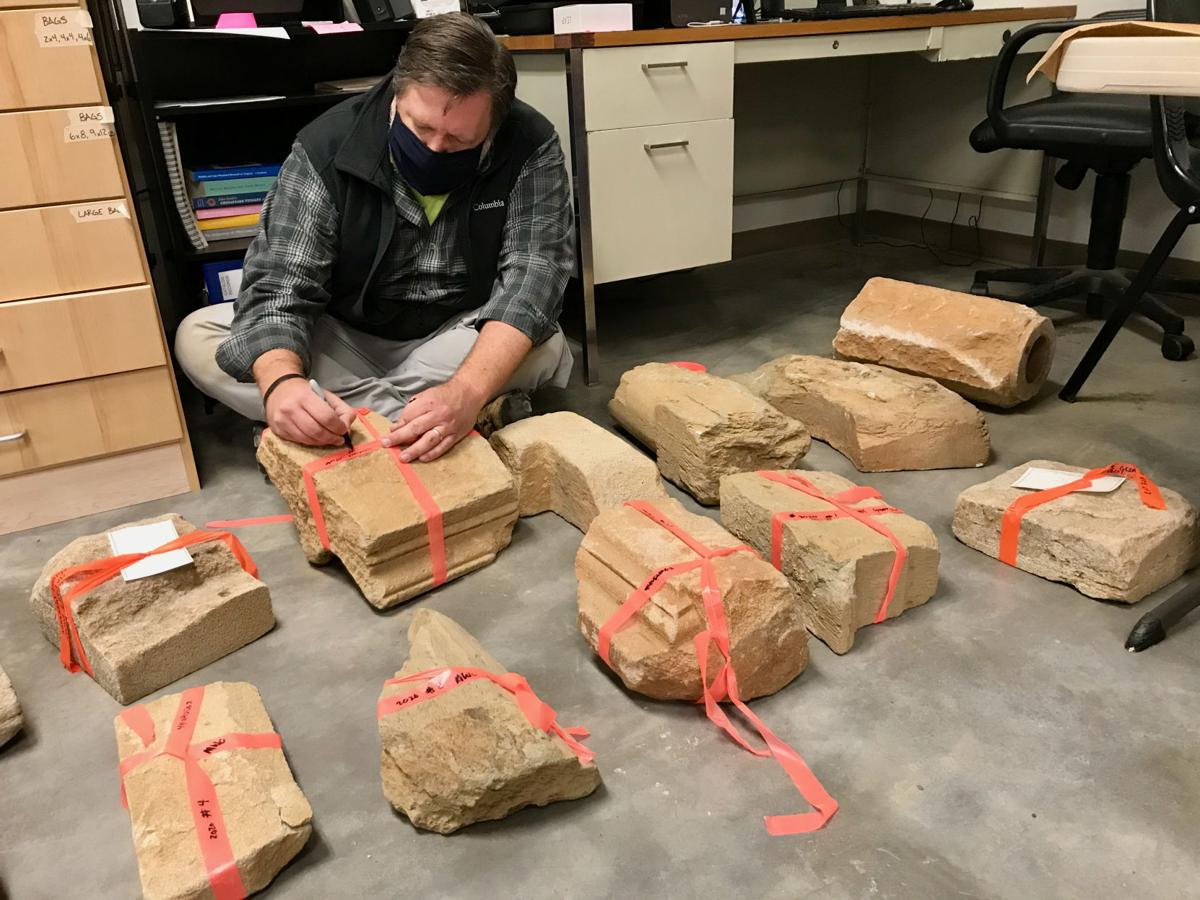 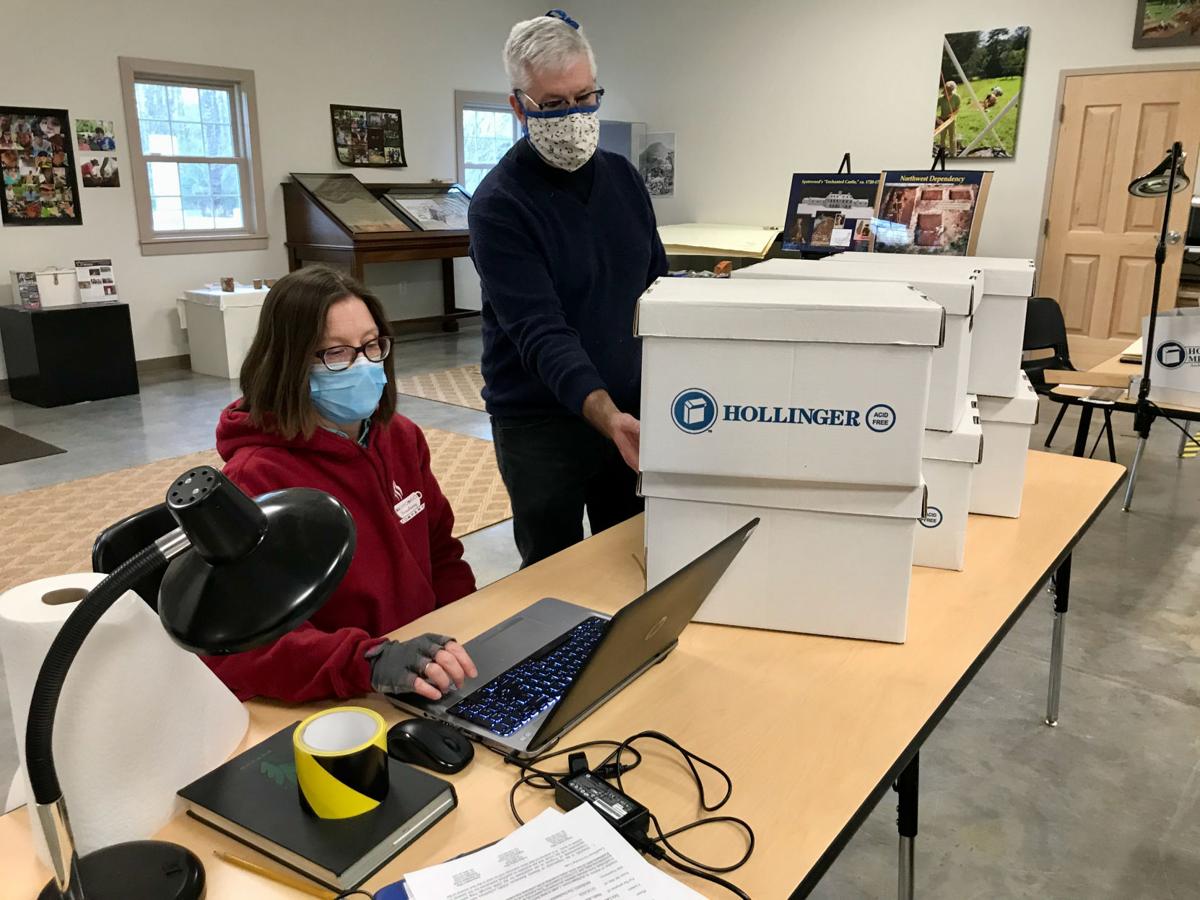 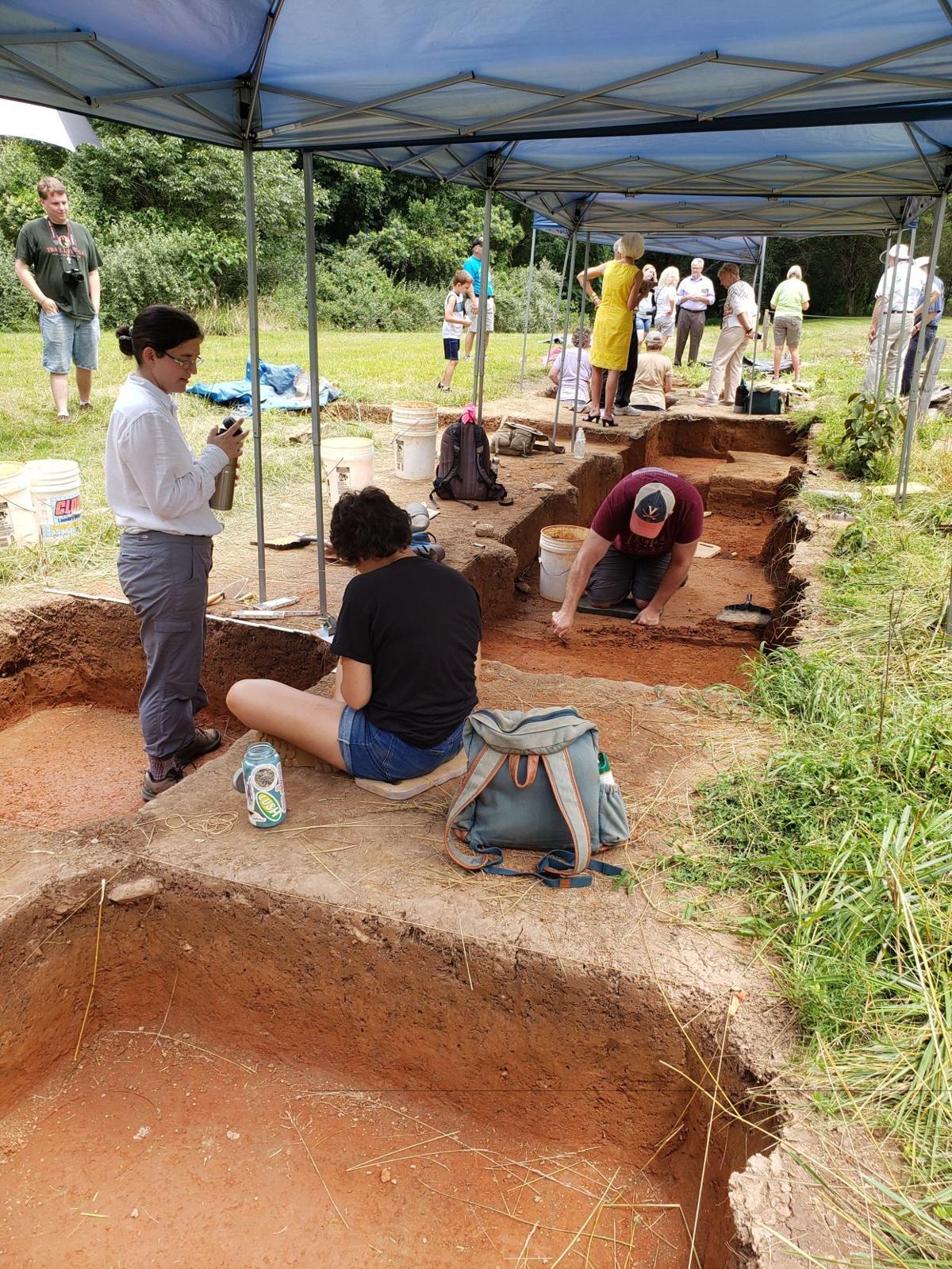 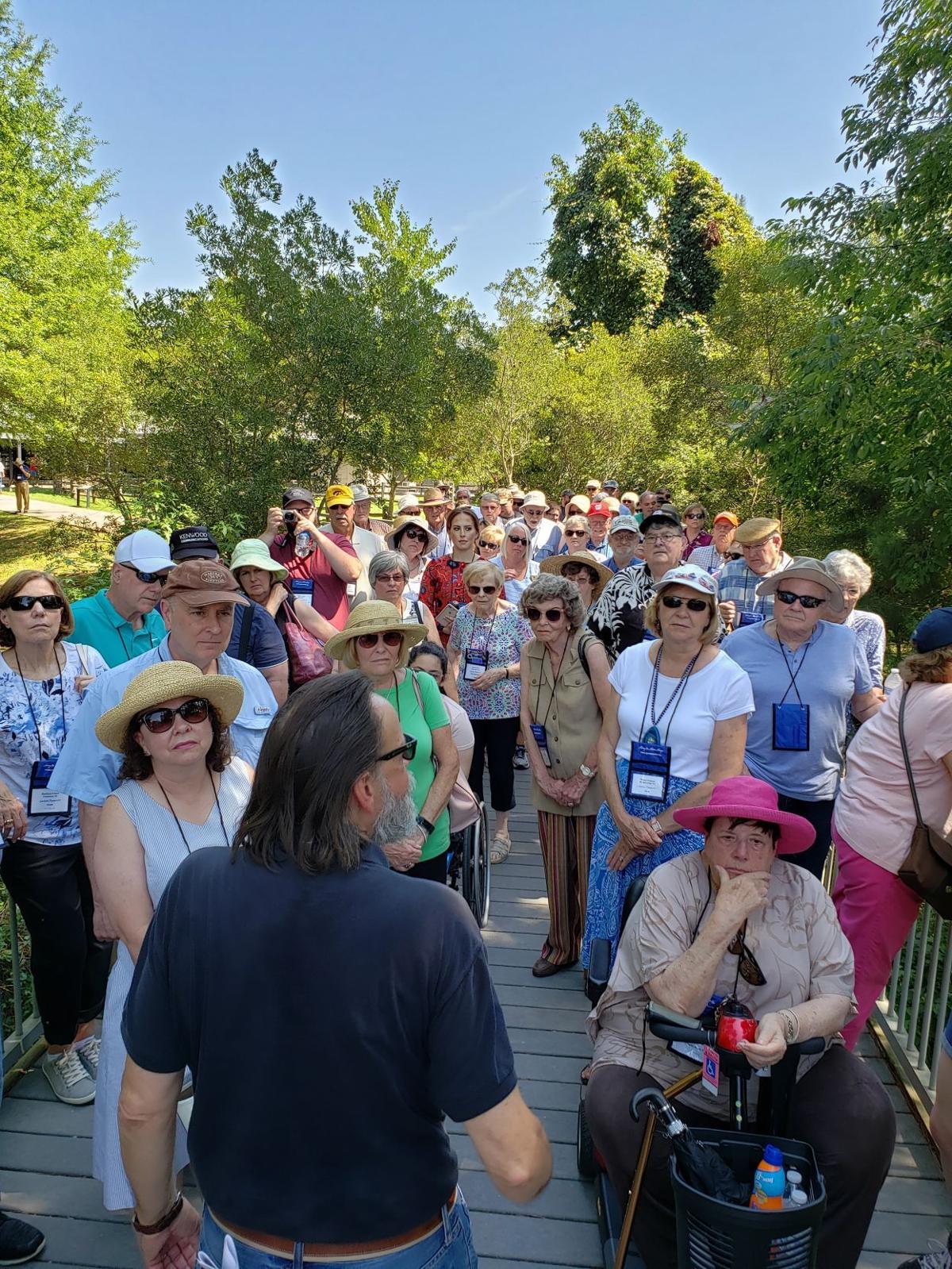 A nationally important collection of artifacts from British Virginia has, after decades of absence, landed back in the environs from which they were excavated: Orange County.

Many of the remains of what was the colony of Virginia’s largest and most impressive structure—bigger than the Governor’s Palace in Williamsburg—have returned to the vicinity of Germanna, royal governor Alexander Spotswood’s pioneering settlement on the Rapidan River.

Earlier this month, the private, nonprofit Germanna Foundation became the new steward of a state-managed collection of more than 100,000 artifacts painstakingly dug about 30 years ago from the site of Spotswood’s house, near today’s Locust Grove Campus of Germanna Community College.

“This has been years in the making,” Tim Sutphin, the foundation’s executive director, said in an interview on the day the materials arrived. “... It had been a dream and aspiration since 2013.”

Using a U-Haul truck, Sutphin and colleagues moved the collection—about 80 boxes in all, plus blocks of carved Aquia sandstone—from the basement of a building on the University of Mary Washington’s Fredericksburg campus where they had been stored for decades.

Now, they’ll be a centerpiece of the collections in the foundation’s new Hitt Archaeology Center. In recent years, the nonprofit started an archaeology program at several of the half-dozen historic sites it owns in the Piedmont, and opened the center in 2019.

State Archaeologist Elizabeth Moore and Laura Galke, chief curator of the archaeological collections at the Virginia Department of Historic Resources, came to help transfer the truckload into the Hitt Center, inventory it in a state database, and get it settled.

The collection includes not only artifacts but also, crucially, the notes, drawings and other data from previous archaeologists’ excavations of the Enchanted Castle ruins.

“We are delighted that this facility is here,” Moore said of the Hitt Center. “… It really kicks off a new era of research here at the Spotswood property. And bringing in the collection allows Eric to lead additional research on the artifacts that have already been excavated, and to pull those together in a unified program that can direct new work and help understand the whole picture, not just pieces.”

“Having it all in one place and allowing us to collaborate on it is really a wonderful step for the collection, for DHR and this facility,” Moore said. “We are very excited.”

The Hitt Center’s stewardship of the artifacts will make it more accessible for researchers and scholars, she said.

She praised Eric Larsen, director of the foundation’s archaeological efforts.

“Eric has done a fantastic job leading this program, moving it forward, leading this new archaeology initiative,” Moore said. “It’s not often that we see new programs get developed and flourish in this state.”

Moore, who attended the center’s opening in 2019, said Germanna is part of the American frontier story—that is, from back when Orange and Culpeper counties were frontier places in the Colonial period.

“There was nothing else like it, this far west,” she said. “It’s a great example of how little we know about the past. Everyone knows about Monticello and Mount Vernon. But there are so many stories that still have not been as well addressed, in the public eye, as they could.”

With his enormous and ornate home, Galke said Spotswood was “trying to create an impressive facade for the French to the west and the American Indians. And making it of brick and fancy dressed stones in a place that must have been very much wilderness.”

With his iron mines and furnaces, the go-getter was trying to create new revenue for the colony, she said.

“This is an important part of the story of Virginia, and the expansion of British influence westward, for good or bad,” Galke said. “That house was a statement about the British in the New World, a statement to the Spanish and the French.”

After Larsen, Sutphin, Moore, Galke and others unloaded the collection and carried it inside the climate-controlled facility, Moore and Larsen briefly examined a portfolio of archaeologists’ renderings of the Enchanted Castle site and the mansion itself.

Moore was impressed by the size of the house and its central, cross-shaped chimney design, with fireplaces that heated at least eight rooms on two floors. “I hadn’t seen anything like that before,” she said.

The Enchanted Castle collection numbers easily over 100,000 artifacts, many of them hand-wrought nails and pieces of window glass. Archaeologists excavated 20,000 pounds, or 11 tons, of brick from the site.

In three years of recent, smaller-scale excavations there, Larsen’s team has unearthed over 35,000 artifacts, he said.

“I’m a little bit numb,” Larsen said of the collection’s arrival. “We’ve been working toward this for a long time. It’s a win for Mary Washington, for DHR and for Germanna. It’s nice to know this collection is now sitting under one roof, is going to be in good shape and well taken care of, and be accessible for future academics, scholars, archaeologists, teachers—and the public—to come and touch work with the past.”

“No, it is Christmas,” said Kelly Arford-Horne, the foundation’s research archaeologist.

“But it may take years to unwrap all the presents,” Sutphin replied.

Later, just before calling it a day, Larsen found a telling artifact from one of those fireplaces in a black milk crate. It was a fragment from an elaborately decorated cast-iron fireback that sat in the rear of Spotswood home’s hearths.

The fireback was probably made from iron manufactured in the ironworks the early industrialist established in the vicinity, the South’s first. He imported two shiploads of Germans with mining and manufacturing skills to man it.

An entire, circa-1730 fireback also found during excavations of Spotswood’s home occupies a spotlighted niche in “The Story of Virginia,” a 400-item exhibition that is a pride of the Virginia Museum of History and Culture in Richmond. The museum bought it at auction. Its fireback is embellished at center with a crowned Indian princess, based on one of Virginia’s Colonial seals.

A fireback wasn’t merely pretty. The panel of thick iron sat at the back of a fireplace, and radiated the fire’s warmth back into a room.

The fragment that Larsen examined had similarities in design, with leaves, an arch and an urn visible upon a quick examination. It could have the same decoration as the museum’s fireback.

“It’s astounding to me to look at this and consider the capital, physical labor and hands-on skills involved in making this,” Larsen said. “I think it’s absolutely fascinating, and a really rich story that we need to talk about more directly.”

He was referring to the fact that the people who toiled in Spotswood’s iron-making industry were German-Americans and enslaved African Americans.

Today, most Americans associate slavery in that period with tobacco plantations, but in the Germanna area, Spotswood and his associated used enslaved people to make bricks, labor in the mogul’s new industry, and build grand homes that signified to their wealth and status, Larsen said.

Most people don’t think of industrial slavery arriving until the 19th century, he noted. But in the 1720 and 1730s, “Spotswood was completely reliant on an enslaved work force,” Larsen said.

The always-hustling, illegitimate, Morrocan-born magnate was granted 80,000 acres in Central Virginia by the crown’s British Privy Council. He owned 20 different plantations, each with enslaved labor forces, all around Germanna.

To learn more, visit germanna.org or the foundation’s Facebook page.

A crash involving three vehicles closed U.S. 29 in Madison County for several hours Friday afternoon and sent a Ruckersville man to the hospit…

Virginia Lt. Gov. Alexander Spotswood’s portrait adjoins a 3-D rendering of the ‘Enchanted Castle,’ the palatial Colonial home Spotswood built of stone and brick to anchor his 80,000-acre inland empire. The village beside his home became the courthouse seat of Spotsylvania County, named for him.

This fireback was excavated decades ago from the site of Gov. Alexander Spotswood’s mansion in Orange County. Today, it is exhibited in Richmond by the Virginia Museum of History and Culture.

State Archaeologist Elizabeth Moore holds a Colonial artifact beside a LIDAR image of the royal governor’s Fort Germanna and Enchanted Castle sites near the Rapidan River.