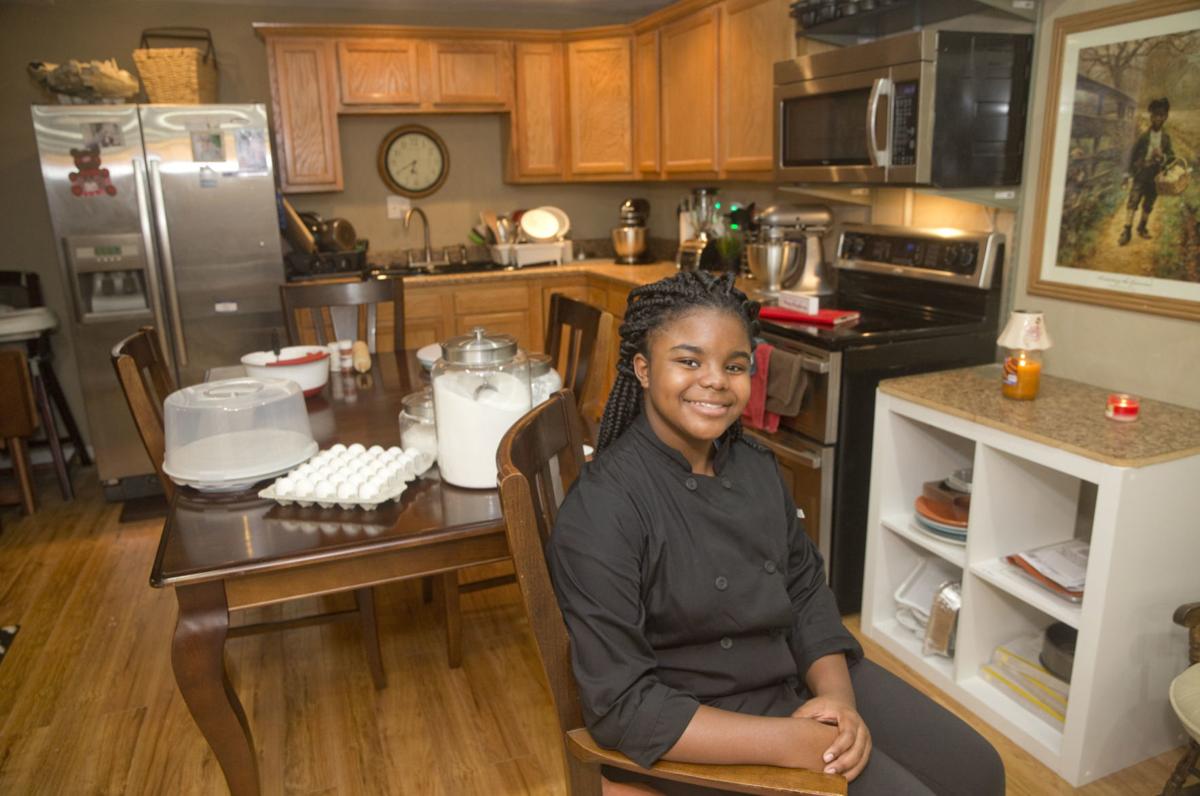 Taylor Pusha, 12, is pictured in her basement kitchen. Taylor was a contestant on the Food Network’s “Kids Baking Championship” last summer. She qualified for a field of nine bakers and finished in the top four. The show is a contest, in which the children all bake a wacky recipe with ingredients and utensils in the TV studio kitchen. 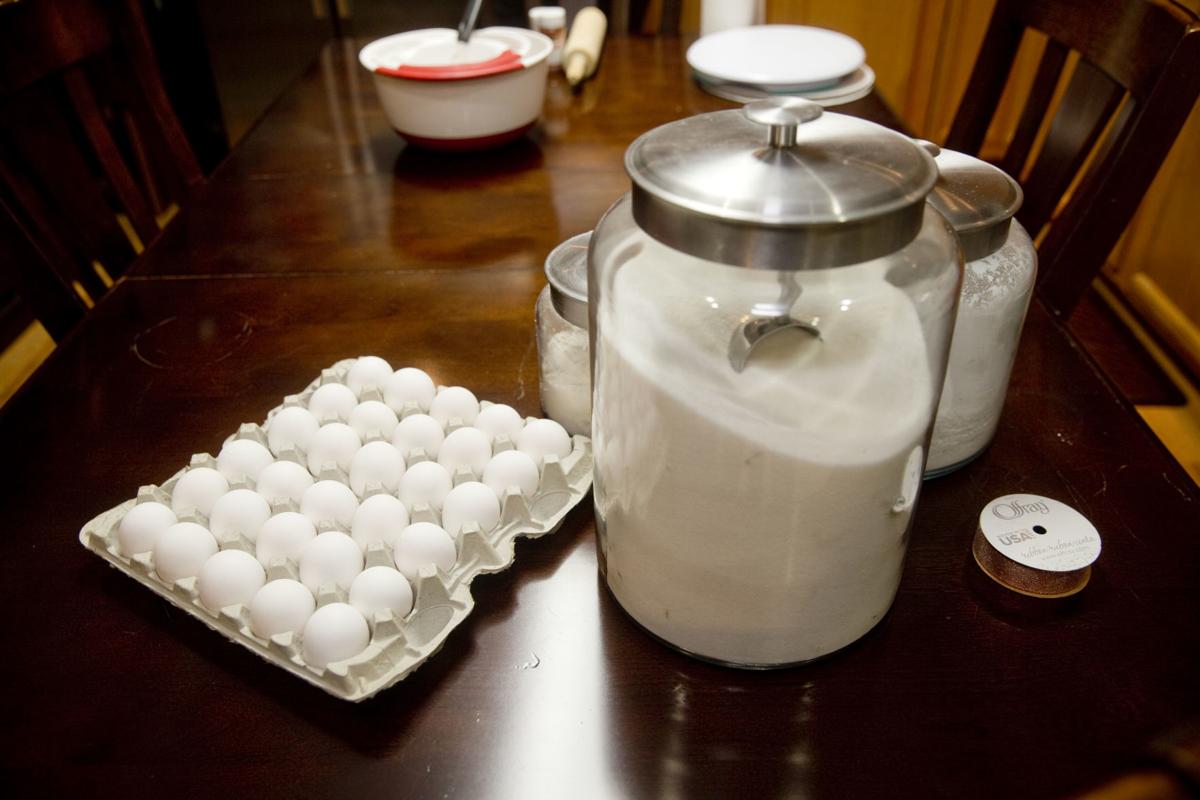 Some of Taylor Pusha’s baking ingredients on her kitchen table. Taylor is a seventh-grade student at Northside Middle School, and an avid baker who has her own side business making custom cakes and desserts for clients. 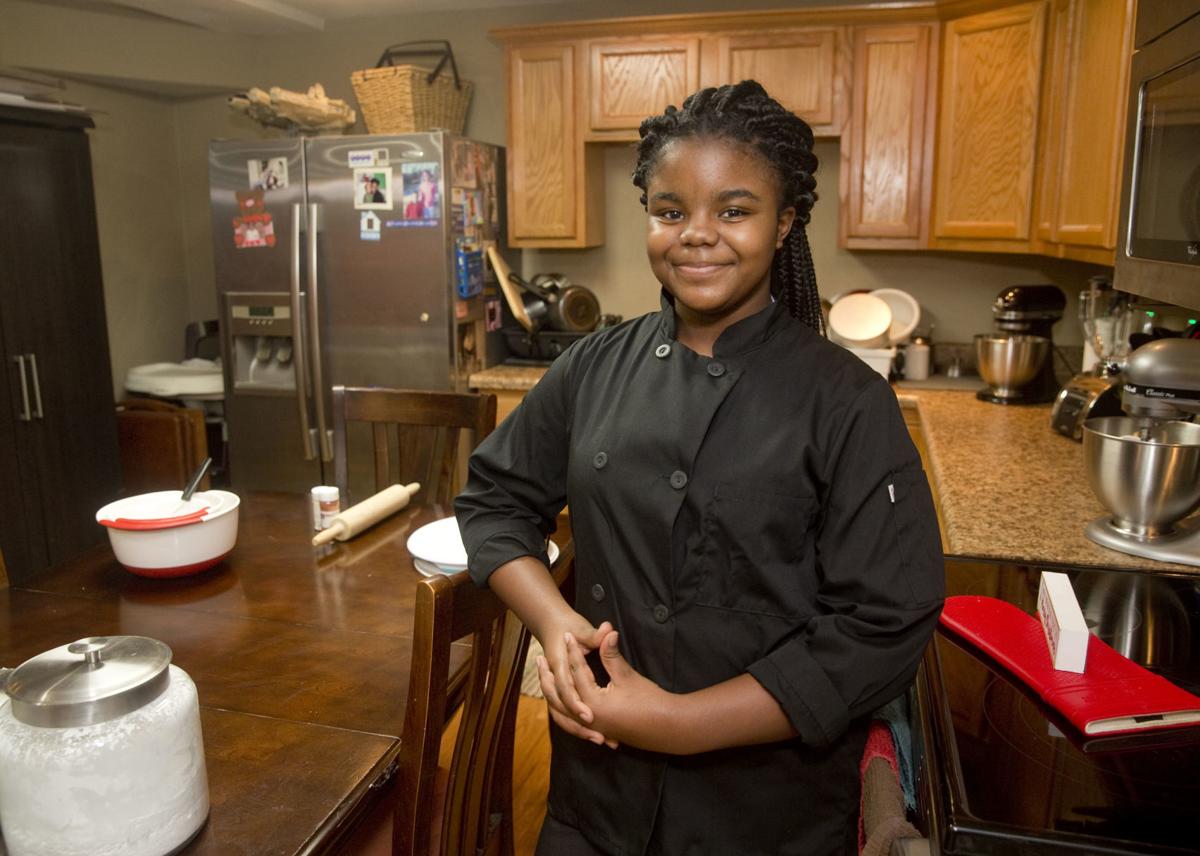 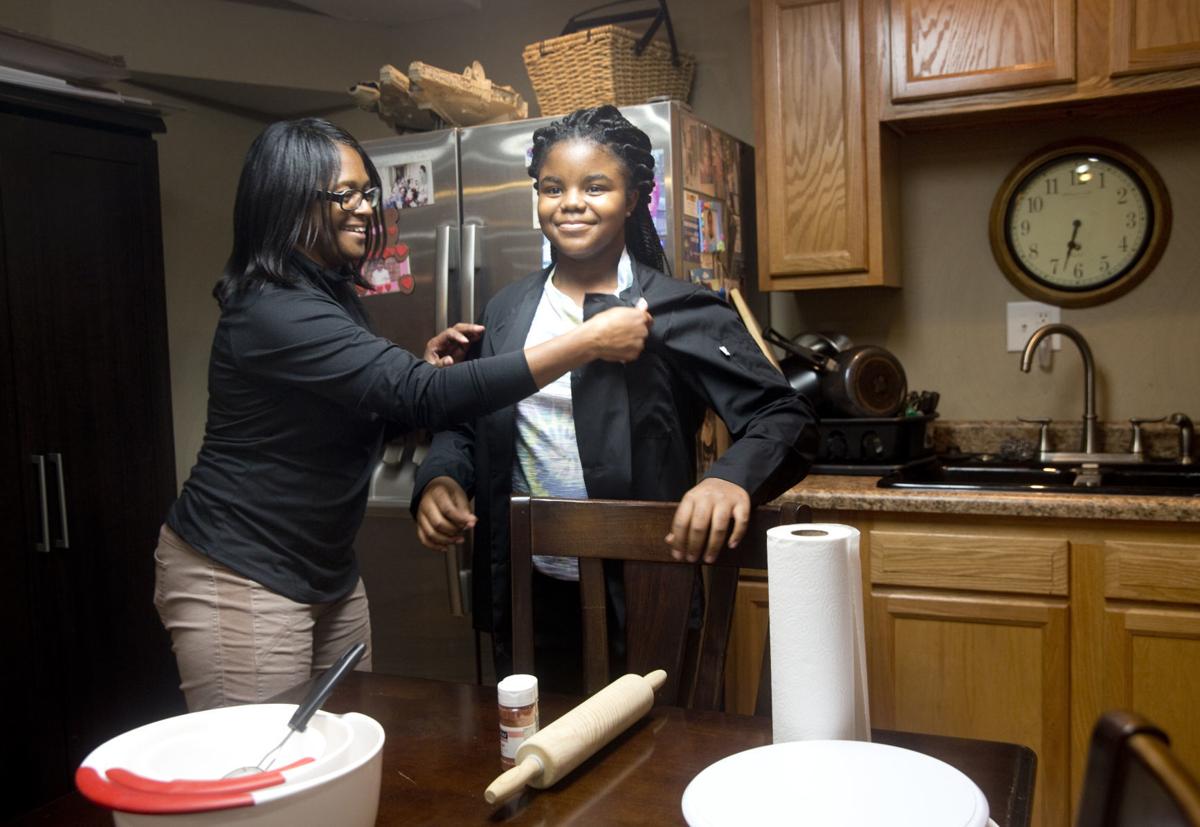 Usually, baking is a piece of cake for Taylor Pusha. But there she was in a television studio, struggling to get her buttercream frosting to spread evenly as the clock ticked down and the judges watched.

She had qualified for “Kids Baking Championship” on the Food Network, and now her trip to Los Angeles and a chance to win $25,000 was crumbling like the cake that had left specks in her pristine icing. The celebrity judges, actress Valerie Bertinelli and baker Jeff “Duff” Goldman, had to decide whether to keep 12-year-old Taylor or another competitor for the next round. The tension was so thick you could slice it with a stainless steel pastry knife.

“My heart was beating so fast,” Taylor said.

The judges chose Taylor, who survived to bake again. She did so well, in fact, she stayed on five more episodes and made it to the final four contestants out of the nine-baker field that started during the seventh season of “Kids Baking Championship,” which aired late last summer. She even won a challenge round with her creation of a poke cake topped with a hedgehog (more about that later).

The competition was the icing on the cake for Taylor, a seventh-grade student at Northside Middle School who has been baking since she was in elementary school. She even has a side business in her very own kitchen in the basement of her north Roanoke County home, where she lives with her parents, Beth and the Rev. Lee Pusha (the family’s name is pronounced “pooh-shay”).

Most weekends, she fills orders for customers who want wedding cakes, cupcakes, birthday cakes and other sweet treats from Taylor-Made Cakes and Creations. She was inspired to bake by her mother and her sister, Chloe, 20, who is now a third-year student at the University of Virginia. Taylor’s specialty is a poundcake recipe Chloe left her when she went to college.

And anyone who knows a middle-schooler these days wouldn’t be surprised to learn about Taylor’s other primary baking influences.

In fact, YouTube was how she found out about “Kids Baking Championship.”

“Kids Baking Championship” is a fast-paced, one-hour weekly show in which children bake the same goodie using their own devised-on-the-spot recipe. Bertinelli and Goldman describe the dessert, which is usually a cake with a silly theme or other flourishes.

“You have to think fast on this show,” Taylor said. “If you don’t come up with an idea, you’re going to lose.”

Some of the cakes that were featured this past season were Angry Bird cupcakes, cakes that looked like an international food item (Taylor had to bake a cake that looked like a sushi roll), a Bundt cake that resembled a giant doughnut and the previously mentioned poke cake, which is a cake with small holes poked in the top that hold gooey toppings. That one also had to be topped with an edible hedgehog.

At the end of each episode, one contestant is eliminated—sort of like “Survivor” meets “Top Chef” seasoned with a pinch of “The Hunger Games.”

Taylor watched old episodes of the show online, liked it and decided she wanted to be on it. She registered through an elaborate process that included an application, a baking portfolio, a video shot on an iPhone, photos of baked goods and, finally, a baking test and Skype interview. She found out last April that she’d made the cut.

“I was riding with my friend Savannah to the skating rink, and my dad texted our family group chat and said, ‘We’re going to LA,’ ” Taylor said. It was hard not to jump up and scream.”

That was the beginning of a 19-day odyssey in California, from May 22 until June 10, that included 9 ½-hour days on the set, interviews and occasional day-off trips to the Santa Monica Pier amusement park and a group outing to watch “Aladdin.” Chloe stayed with her the whole time. Her father, minister at Ebenezer AME Church in Roanoke, went out for a week or so, and then Beth, housing and community development director for Southeast Rural Community Assistance Project, was there for the final tapings.

Each day started at 7:30 a.m., when contestants were picked up at the hotel and taken by van to the studio, which was equipped with several fully stocked baking stations. The children had breakfast, put on their aprons and headed to the set. Each contestant was followed by a camera crew and a producer who took notes. Other production assistants were available to fetch ingredients if they ran out on the set. (None of that behind-the-scenes activity is visible during the broadcasts. The only shots viewers see are the contestants and judges.) The contestants have two hours to make their creations, which is edited into the one-hour episode.

The show can be intense to watch. Being a contestant is even worse.

“Before I went on the show, I was worried,” Taylor said. “I remember my dad telling me that if something happened, to stop, breathe and think of something to fix it.”

That was good advice, because even though the children are experienced bakers despite their youth—Taylor said that one contestant had even received baking lessons in Paris—mistakes and screw-ups are part of the drama. Plus, midway through each episode, the judges add a wrinkle to the recipe.

Taylor burned her hand during one episode, a scene not shown during the broadcast. The timer continued to count down, however.

Taylor rallied from the setback to win that episode’s competition, when her hedgehog cake was judged the best of the five remaining competitors.

She was eliminated after the next episode, though, after her apple pie crust fell apart.

“I used too much butter,” she said later, during an interview at her kitchen table. “I thought a lot of butter would make it better.”

A perfectly sensible idea, just not in that particular crust.

“I really, really, really wanted to win,” she said. “On the bright side, they bring kids from past seasons into things like a Halloween competition, so maybe I will get to do that. I was really sad, but I am going to keep going and never stop.”

Early in Taylor’s baking career, her parents recognized that they underestimated her potential as a baker.

That epiphany came when Taylor was asked to bake an alligator birthday cake. Beth Pusha told Taylor to just bake a regular cake and decorate it with an alligator on top. Taylor is an artist, so that would be no trouble, her mom thought.

“Make something simple,” her mom said.

Later, when Beth went back to check on Taylor’s progress, she was astounded at her daughter’s culinary creation. Taylor had baked two long cakes, stacked in twos and laid end to end, and sculpted an alligator, which she covered with green fondant and decorated with yellow eyes and sharp teeth. The fact that she even knew how to make fondant—a dough-like icing that can be laid atop a cake rather than spread—was impressive enough.

“We realized we were holding her back,” her mom said.

A good student who is enrolled in Roanoke County Public Schools’ gifted arts program, Taylor started making elaborate cakes, which she could carve into desired shapes—Minions, Harry Potter books and even a cake that looked just like a Thanksgiving turkey.

She has a completely outfitted kitchen, with a double oven that allows her to bake two things at two different temperatures at the same time, a refrigerator and two stand-up mixers.

She bakes for clients almost every weekend, making the cakes on Friday night and completing the decorations on Saturdays. The family limits the number of orders she can take, because of all of her school work and other extracurricular activities, which in the past has included softball, gymnastics and music (she plays clarinet).

So far, Taylor has kept in touch with her fellow contestants through a group chat. In addition to the trip to Los Angeles, Taylor earned a teal hoodie with “Kids Baking Championship” emblazoned on it and a final four apron autographed by Bertinelli and Goldman.

“Which I am going to put in a frame and never, ever use,” she said with a smile.

Taylor Pusha bakes specialty cakes for birthdays, weddings and other occasions. She can be reached at taylormadecakesandcreations@gmail.com. You can also find her on Facebook under Taylor-Made Cakes and Creations

Does an alien species live inside stars?

Before becoming President of the Culpeper Minutemen, Charles Jameson had no idea that African Americans fought in the Revolutionary War.

Four family members have died and a fifth is missing in the accident, which is being called the worst recreational disaster in the county.

Taylor Pusha, 12, is pictured in her basement kitchen. Taylor was a contestant on the Food Network’s “Kids Baking Championship” last summer. She qualified for a field of nine bakers and finished in the top four. The show is a contest, in which the children all bake a wacky recipe with ingredients and utensils in the TV studio kitchen.

Some of Taylor Pusha’s baking ingredients on her kitchen table. Taylor is a seventh-grade student at Northside Middle School, and an avid baker who has her own side business making custom cakes and desserts for clients.