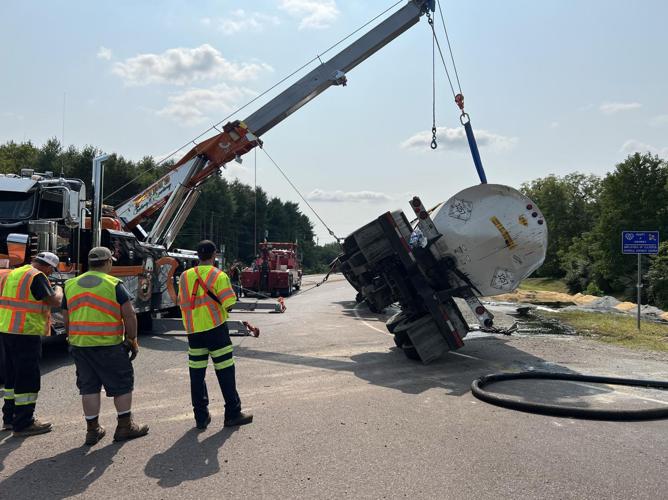 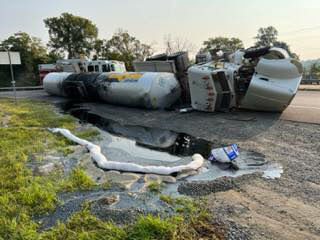 An overturned tanker spilled hot tar Sept. 17 at the junction of Route 3 and 522 in Culpeper. 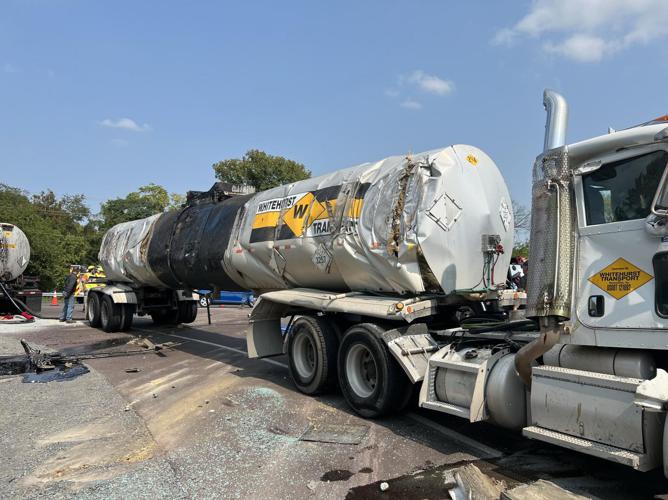 Whitehurst Transport tanker carrying hot tar was lifted upright after overturning Sept. 17 at the intersection of Route 3 and Route 522 in Culpeper.

The West Davis Street company was dispatched at 8:11 a.m. on Sept. 17 for an overturned tanker leaking fluid at the intersection of Germanna and Zachary Taylor Highways near the Town of Culpeper.

Quick defensive actions allowed firefighters to contain hot tar leaking from the overturned tanker, protecting vegetation and diverting it from a stormwater ditch along Zachary Taylor Highway, according to a CCVFD post.

Of the 6,058 gallons of hot tar, approximately 1,800 gallons leaked, with 4,200 gallons recovered and offloaded prior to up-righting the tanker. Crews were on the scene for about five and a half hours addressing the incident with Rescue Engine 1 and Pumper 1, the post said.

CCVFD Capt. Travis Kenney had command and coordinated the response. There were no injuries to personnel on scene. The volunteer company thanked everyone involved for making the incident successful.

Police say Austin Lee Edwards, 28, met the girl online and obtained her information by deceiving her with a false identity, known as “catfishing." Edwards was a Virginia State Trooper until his resignation last month.

The driver, 55-year-old David Allen Starkey, died at the scene and was the only occupant in the Silverado.

It wasn't until the woman got home at the end of the day that she was met by police officers, who told her the patient was her 17-year-old daughter, Montana.

Police say the females stole wallets, cash and credit cards belonging to victims then made several fraudulent purchases on a credit cards at Wal-Mart.

A shooter opened fire in a Walmart in Virginia late Tuesday, leaving six people dead, police said, in the second high-profile mass killing in a handful of days.

How to make Thanksgiving dinner, with love from Culpeper Head Start kids

Looking at it now, Scott Smith’s destiny seemed to be written in the stars—a fate long since predetermined by the hard work of his ancestors.

Authorities investigating the fatal shootings of six people at a Walmart said that the shooter bought the gun just hours before and left a note with grievances against coworkers on his phone.

No volunteers: Culpeper Winter Heat Shelter opening delayed, may not open at all

Overnight shelter at St. Luke Lutheran Church on North Main Street was supposed to open this Sunday, now it's been pushed to Dec. 2 due to lack of community support.

New 'invisible fiber' will change the way we eat food

New 'invisible fiber' will change the way we eat food

An overturned tanker spilled hot tar Sept. 17 at the junction of Route 3 and 522 in Culpeper.

Whitehurst Transport tanker carrying hot tar was lifted upright after overturning Sept. 17 at the intersection of Route 3 and Route 522 in Culpeper.