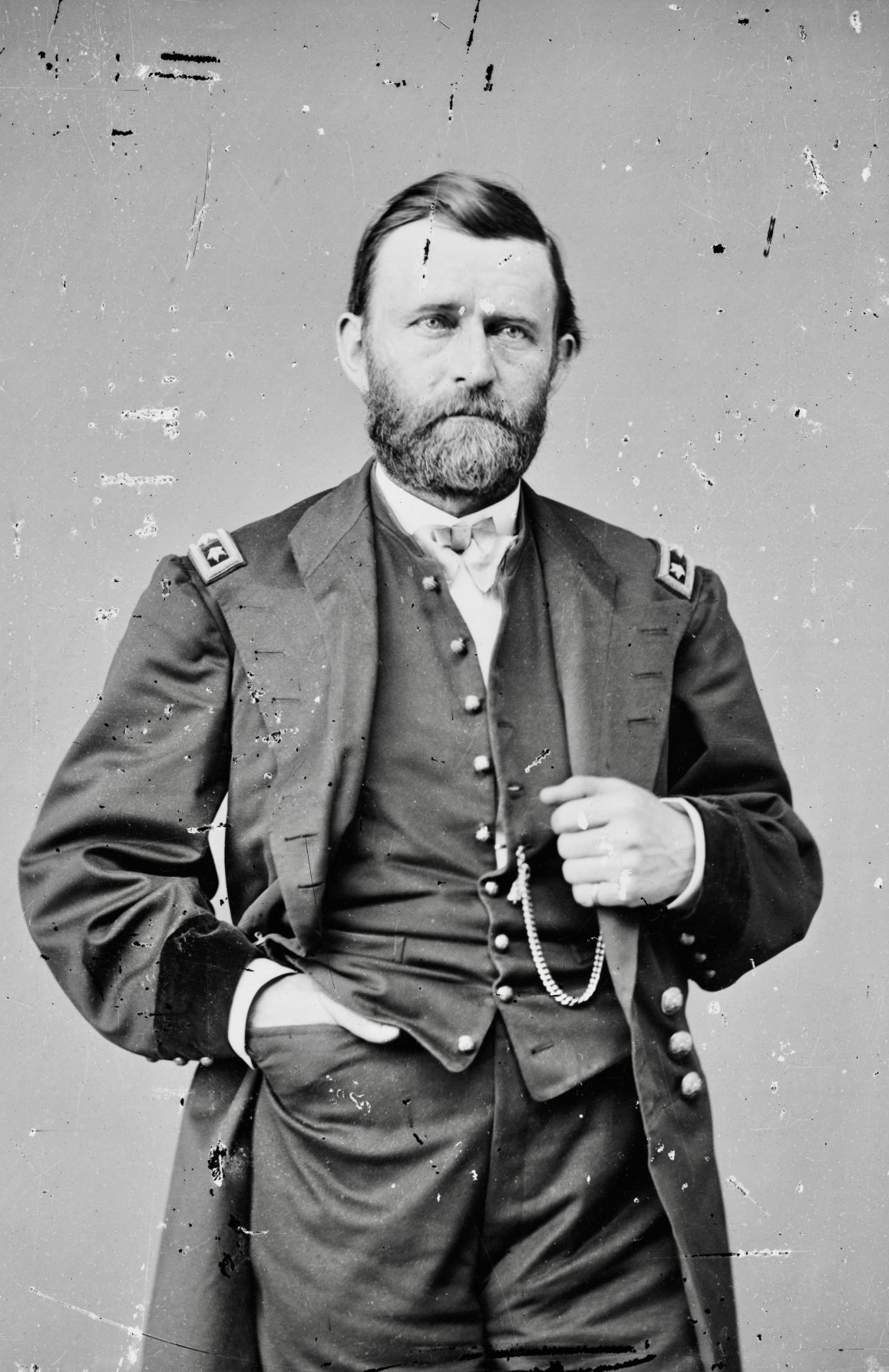 Lt. Gen. Ulysses S. Grant arrived in Culpeper County on March 10, 1864, to introduce himself to the Union’s Army of the Potomac and its commander, Maj. Gen. George G. Meade. 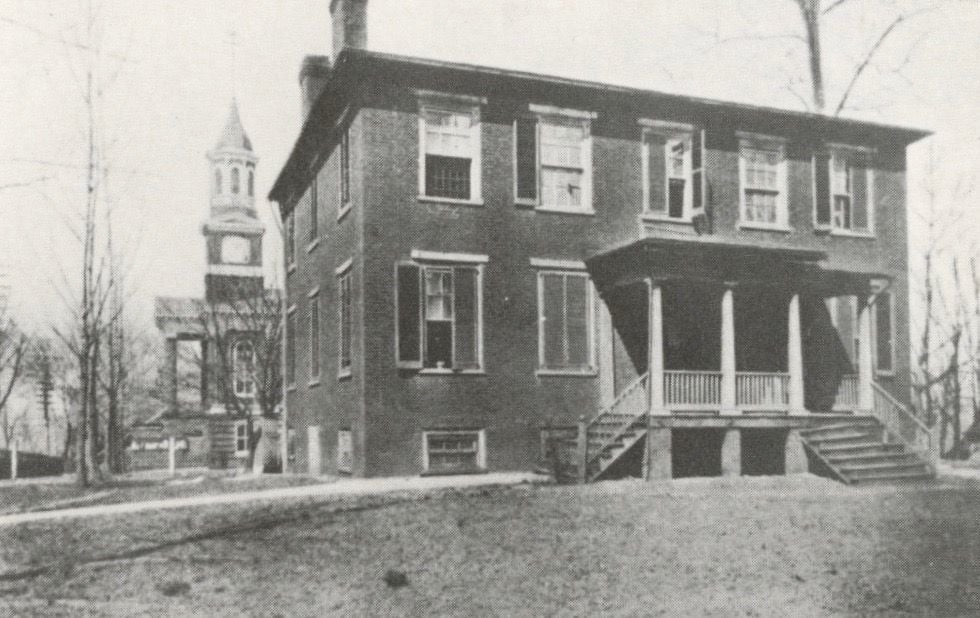 Lt. Gen. Ulysses S. Grant, commander of all Union armies, made his headquarters in the John Barbour house beside the Culpeper County Courthouse on West Davis Street in the spring of 1864. 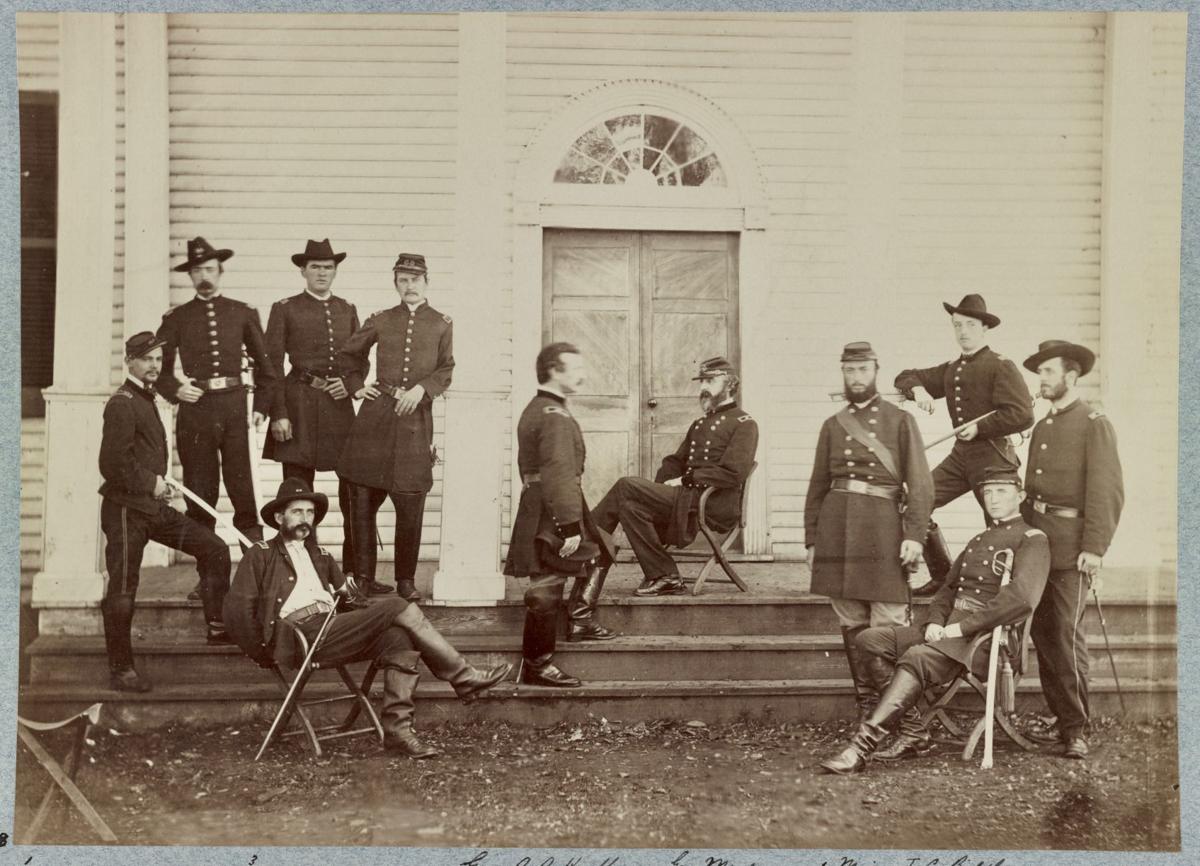 Union Maj. Gen. George G. Meade, commander of the Army of the Potomac, poses with his staff in Culpeper County, where he conferred with Grant in the spring of 1864 before they launched the Civil War's Overland Campaign.

By CLARK B. HALL

For the scheme that was nursed by the Culpeper hearth

The scheme that smouldered through winter long

The resolute scheme of a heart as calm

As the Cyclone’s core.

“Pursuant to … the act of Congress…the President…has assigned you to the command of the Armies of the United States.”

With that dramatic order in hand and now suddenly managing 553,000 U.S. soldiers nationwide, Lt. Gen. Ulysses S. Grant took the train from Washington, D.C., to Culpeper County on March 10, 1864, to introduce himself to an army he had never met.

It is lamentably overlooked today that the reunification of this country resulted from the military decisions made—by this one man—in Culpeper in the spring of 1864, 155 years past.

Fresh from western victories, including Vicksburg, and now wearing three stars on his shoulders, 42-year-old “Sam” Grant was met on the depot steps at Brandy Station by 49-year-old Maj. Gen. George Meade, commander of the Army of the Potomac.

Both men rode out to Meade’s camp (today, Wil Spillman’s farm). And there, the nation’s new general-in-chief explained his future headquarters “will be in the field and until further orders, will be with the Army of the Potomac.” Meade offered to resign so Grant could put his own man in charge of the forces contending against Confederate Gen. Robert E. Lee, but Grant insisted Meade remain in tactical command of his 120,000 soldiers, now wintering in Culpeper.

Gen. Grant returned to Washington on March 11, where the plainspoken chief “published an order in six lines and refused three dinners.” Grant then met privately with President Lincoln, who told Grant he did not intend to “interfere” with the commander’s impending operations. And in fact, the president did “not want to know” Grant’s plans as Lincoln feared the “temptation to leak.”

Returning to Culpeper on March 26, Grant ruminated over the future course of the nation’s coordinated military effort. As Grant’s strategic thinking ultimately developed, his emerging orders ultimately decided the question of national union, or disunion.

With urgent plans to be formulated, Grant quickly got to work from his headquarters lodgment at John Barbour’s home (now gone) on West Davis Street next to the county courthouse.

“Here is Grant, with his utterly immovable face, going about from Culpeper to Washington & back and sending no end of cipher messages, all big with strategy,” Union Lt. Col. Theodore Lyman wrote his wife, Elizabeth, on April 18, 1864, describing Grant, the newly appointed general-in-chief of the Union army.

Riding about Culpeper County on his large, bay horse, Cincinnati, while inspecting the hardened troops of the Army of the Potomac, Grant was concurrently assessed by the war-tested veterans of Antietam and Gettysburg. To note that these easterners were not impressed with the Ohio native was an understatement.

Derisively terming him “Useless” Grant, the army’s cynical troops offered generally unflattering comments. “Our new general doesn’t impress anyone with any idea of greatness,” one soldier wrote. A Massachusetts officer recorded that Grant, “looks like a farmer and rides his horse like a sack of potatoes.” Another wrote, “When in Culpeper yesterday I got a sight of the new Lieutenant-General as he was poking around the house he has since moved into. He is not so hard-looking a man as his photographs make him out to be, but stumpy, unmilitary, slouchy, and Western-looking; very ordinary in fact.”

Some soldiers, though, gave Grant the clear benefit of the doubt. A Maine colonel informed his wife, “For the first time, we have an appointment from the president that carries a grand, national strategy and a unity of purpose.” The unassuming Grant also conveyed, as one Pennsylvanian put it, “an air of business which soon inspired confidence in us all.”

Deeming himself satisfied with the quality of soldiery he observed and reviewed on Culpeper’s plains, Grant wrote on April 26: “The Army of the Potomac is in splendid condition and evidently feels like whipping somebody; I feel much better with this command than I did before seeing it.”

In late April, Grant directed all United States armies to prepare to advance simultaneously against the enemy. Sherman, for example, would attack the Army of Tennessee. Sigel was directed to advance in the Shenandoah. And Grant instructed Meade to attack Lee in Orange County.

On May 4, the nation’s greatest, most consequential military drama began as the Army of the Potomac (and Grant) left Culpeper forever by crossing the Rapidan River and entering the primeval forest of the Wilderness.

We’ll let a private soldier of Lee’s army have the last word on U.S. Grant, offered that May: “We will either ruin General Grant, or he us, and the Confederacy.

Excerpt from “The Armies of the Wilderness,” a poem written by “Moby-Dick” author Herman Melville in May 1864, when he traveled to Virginia to visit his cousin, Lt. Col. Henry Gansevoort of the 13th New York Cavalry, and met Grant at his headquarters in Culpeper County. The poem was first published in August 1866 in Melville’s book of 72 poems about the Civil War, “Battle-Pieces and Aspects of the War.”

Civil War historian Clark B. Hall, a Star-Exponent columnist, lives in Culpeper County. He was profiled in the March issue of Civil War Times magazine. Email him at clarkbhall@aol.com.

To commemorate the arrival of Union Lt. Gen. Ulysses S. Grant in Culpeper 155 years ago this month, a living-history event at Culpeper’s Burga…

Lt. Gen. Ulysses S. Grant arrived in Culpeper County on March 10, 1864, to introduce himself to the Union’s Army of the Potomac and its commander, Maj. Gen. George G. Meade.

Lt. Gen. Ulysses S. Grant, commander of all Union armies, made his headquarters in the John Barbour house beside the Culpeper County Courthouse on West Davis Street in the spring of 1864.

Union Maj. Gen. George G. Meade, commander of the Army of the Potomac, poses with his staff in Culpeper County, where he conferred with Grant in the spring of 1864 before they launched the Civil War's Overland Campaign.