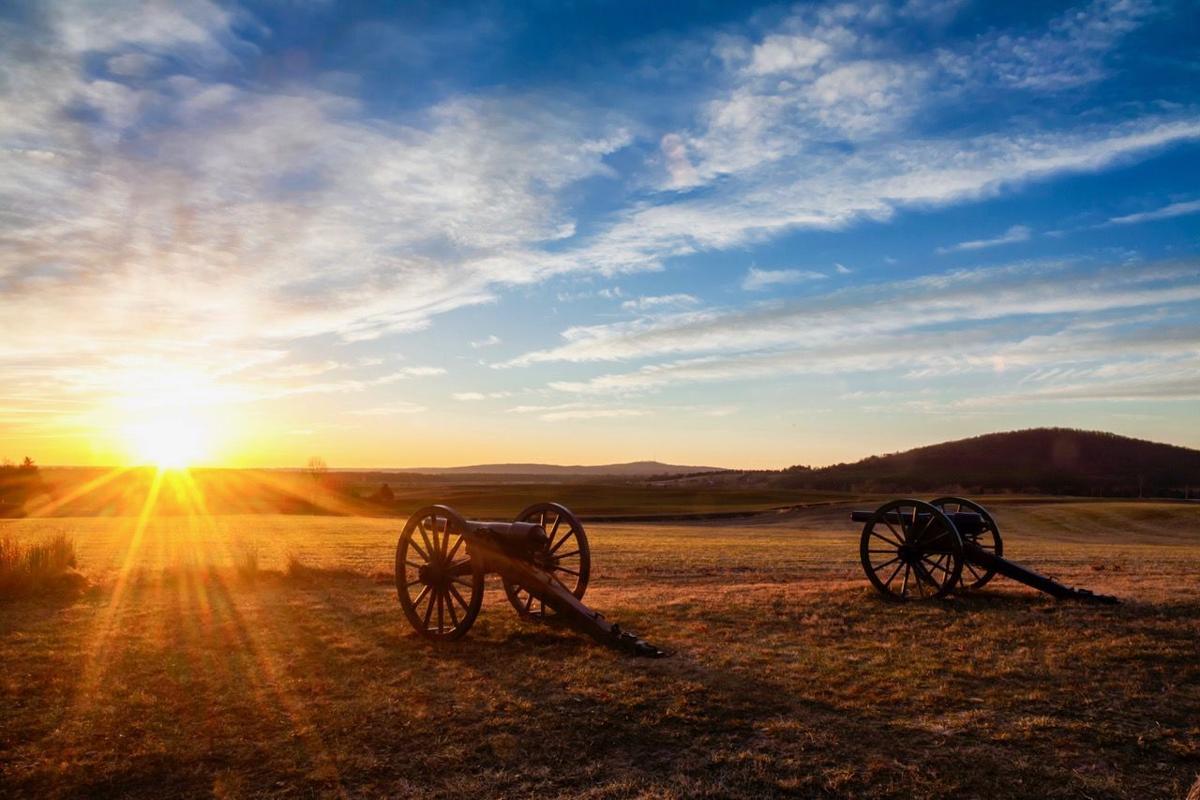 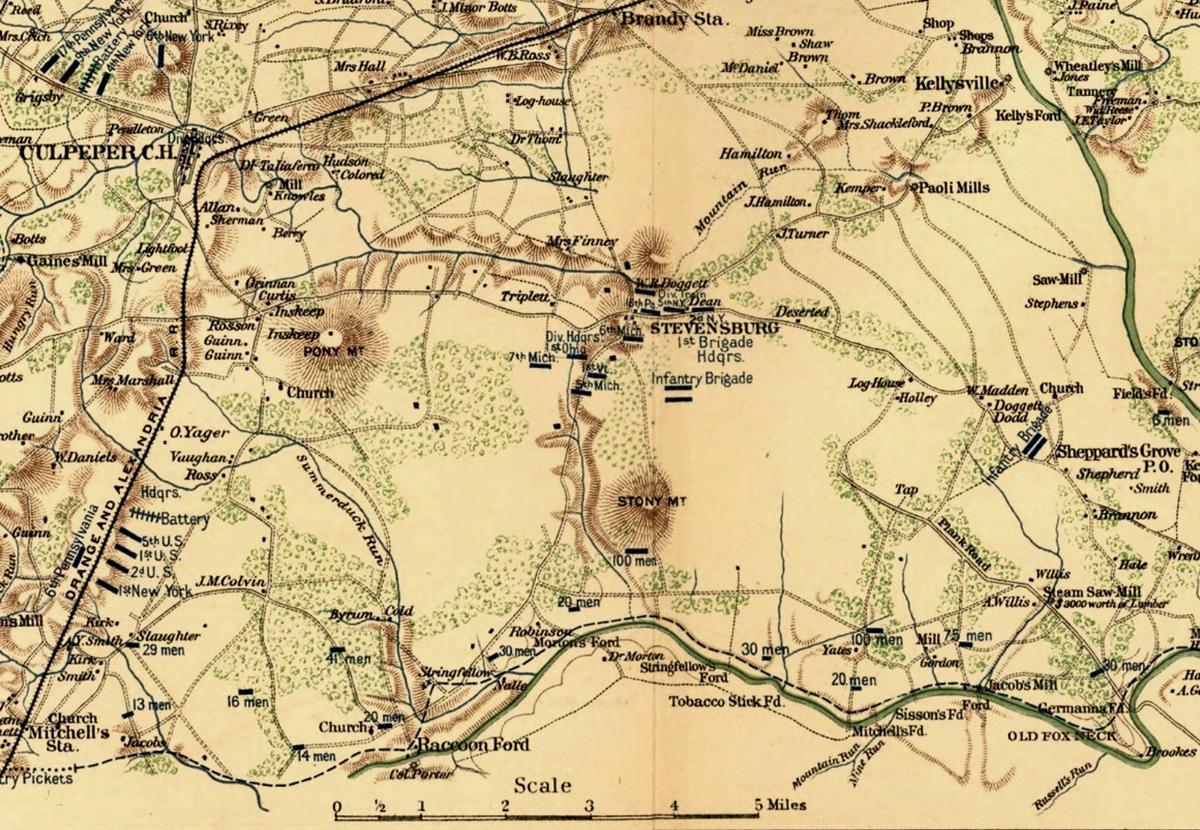 A wartime map depicts part of the area occupied by the Union's Army of the Potomac in Culpeper County in the winter of 1863-1864. Stevensburg south to the Rapidan River and west to Raccoon Ford is now being considered for industrial-scale solar plants.

Without a solar ordinance, developers will continue to target Culpeper County for industrial-scale power plants, especially since they have seen that the county is unwilling to enforce the conditions of its conditional-use permits.

Instead of heeding the example set by Madison County, which enacted a solar ordinance limiting large-scale solar to industrial-zoned land, the Culpeper County Board of Supervisors passed a policy that has zero chance of being enforced. As a supervisor noted, the policy is just a “guideline,” not a law.

Likewise, Culpeper’s comprehensive land-use plan is a “fluid document and could be changed day by day,” this same official said. Of the county’s solar policy, he said: “Any sitting board can make changes to it … The board has the power to go the other direction.”

Is any policy enacted by Culpeper to be taken seriously? Or do officials draft policy, on the fly, with none of it to be obeyed if people later disagree? And where is the public input in this process?

In October 2019, after multiple proposals by Cricket Solar and other companies for giant solar plants in Culpeper, the Board of Supervisors limited such projects to 300 acres and recommended limiting the county’s total solar-plant development to 2,400 acres. Given supervisors’ disagreements about a stronger ordinance, these provisions were the minimum on which they could agree.

In July 2020, Maroon Solar (aka Strata Solar) submitted a plan to build a plant on 1,700 acres along Raccoon Ford Road, including parcels that were part of Crickets’s plan. Maroon totally disregarded the 300-acre limit.

If Culpeper’s solar policy had any chance of being enforced, the county wouldn’t have accepted Maroon’s application for review. Instead, county officials are going over it now.

Meanwhile, Greenwood Solar has approval to build a 1,000-acres facility in the Stevensburg District, the same area as Maroon Solar. Landowners will be harmed by both projects. The Planning Commission voted against Greenwood, but supervisors approved the venture in 2018 and a revised plan is now under review.

Greenwood and Maroon total over 2,700 acres, so it seems there’s no chance for Culpeper’s upper limit of 2,400 total acres for solar projects. Why bother with a policy, then?

The Greenwood and Maroon sites lie within a Civil War area being studied under the U.S. Department of Interior’s American Battlefield Protection Program. In May 2020, Culpeper’s Friends of Cedar Mountain Battlefield was awarded an $80,000 grant for its “Rapidan Front” study of the county’s Racoon Ford, Morton’s Ford and Somerville Ford battlefields and the Union army’s 1863-64 winter encampment sites. This land’s historic significance is undeniable, and the research funded by this federal grant will document it.

Hence, the Friends of Cedar Mountain Battlefield and other allies oppose both solar projects.

It is time for Culpeper County to develop and enact a serious solar ordinance that restricts large-scale solar facilities to industrially-zoned land or marginal or contaminated acreage, and encourages putting roof-top solar on commercial buildings, parking structures and homes. Such an ordinance would set minimum standards for such projects.

The rural land in Culpeper that developers are targeting for solar development represents a rich agricultural and historic heritage, a wonderful resource for the county that brings in tourism dollars.

If residents and county officials do not stand up and fight for and protect this land and these resources, they will be destroyed forever.

Culpeper County resident Susan Ralston is president of Citizens for Responsible Solar, a 501c4 group that advocates for responsible policies which balance demand for renewable energy with the interests of Culpeper and its people.

LETTER: We must agree to disagree peacefully

The year 2020 has been nothing short of a challenging year from many angles for us all.

LETTER: Partisan politics has no place in schools

As a citizen, parent and grandparent of students in the Culpeper County Public Schools, I am concerned about the politicizing of the School Bo…

It is time for Culpeper to look at its history with an open view.

LETTER: Capitol attack was not a patriots' act

The definition of a patriot is “a person who vigorously defends his county.”

In movies of the Old West when a large group of misinformed townsfolk gathered behind a small band of evildoers, bent on a lynching, the sheri…

LETTER: Trump should be censured, not impeached

A wartime map depicts part of the area occupied by the Union's Army of the Potomac in Culpeper County in the winter of 1863-1864. Stevensburg south to the Rapidan River and west to Raccoon Ford is now being considered for industrial-scale solar plants.