In October 2006, Shane Adcock of Mechanicsville was laid to rest in Arlington National Cemetery. 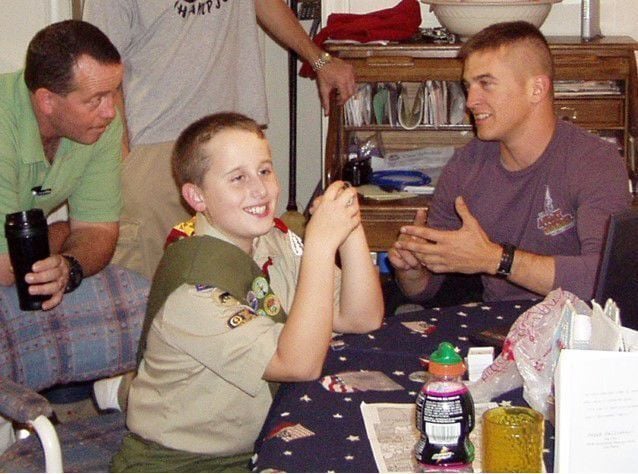 Chris Woychak in the Boy Scout uniform, with his dad Mike (left) talking to Shane Adcock. 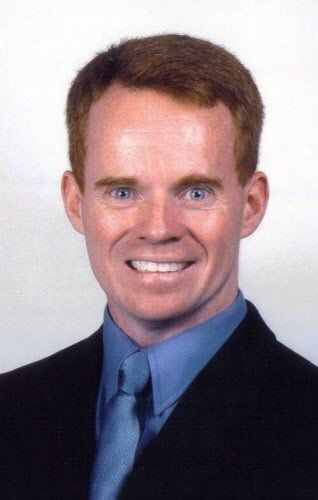 On Veterans Day this week, crowds will gather in small towns across Virginia, and it is a wonderful time to honor the service of all veterans. This year, the Virginia War Memorial in Richmond officially launches a new exhibition, “Who They Were: Lives Worth Knowing.” It showcases the lives of 32 Virginia veterans whose names are among the nearly 12,000 inscribed on the walls at the memorial.

This is a wonderful tribute, but I also want to know why they served. Some did so because of family tradition, some needed a job, some wanted college benefits and some were drafted. However, the draft ended in 1973, so what inspired those who served in the global war on terror?

One of those lives worth knowing in this new exhibition is Capt. Shane Adcock of Mechanicsville, who served in Afghanistan and Iraq. His story of sacrifice shows the impact of one person on a community and our nation. His story is symbolic of all those who serve and find infectious inspiration in patriotism.

Shane’s parents, Maris and Vera, settled in Hanover County and raised two children. They did not serve in the military but always instilled a sense of respect for those in uniform. Maris’ father served in the Navy for 30 years, and Shane grew up admiring his grandfather. Every time Shane left his house to visit his grandfather, he entered Interstate 95 at the Sliding Hill Road entrance near Virginia Center Commons.

As a kid, Shane earned his way up the ranks to earn the title Eagle Scout. He watched the neighbor’s son, Christopher Woychak, when his parents needed a babysitter. Sometimes we never know the impact we have on others, as Chris truly admired Shane.

Chris’ interest in service to our country grew as a young teenager learning of Shane’s service in Afghanistan. Their parents were neighbors, and social media allowed almost real-time updates of Shane’s service overseas. Chris followed in Shane’s footsteps by joining Shane’s Boy Scout troop and also earning the title of Eagle Scout. Chris was unable to attend Shane’s wedding in Hawaii, but Shane’s service continued to shape this young man.

Some might think this inspiration ended when an insurgent threw a grenade at Shane’s Humvee in October 2006, striking him down at the young age of 27. They would be wrong, because Shane’s parents and those who knew him ensured his life was worth remembering.

Maris and Vera Adcock turned tragedy into remembrance. They immediately joined the local Gold Star family chapter to assist others going through tragedy. Maris started riding a motorcycle with a painting of his son and the quote “all gave some, some gave all.” It’s like Shane is riding with him every time he gets on his motorcycle. They worked with Hanover to name the bridge that crosses over I-95 the Capt. Shane T. Adcock Memorial Bridge.

Those who head toward Ashland on I-95 may notice the American flags that are constantly replaced on both sides of the sign. Shane’s Longwood Phi Kappa Tau fraternity brothers and friends started an exhibition baseball game to raise money for a scholarship at Longwood in Shane’s memory. His parents continue to work on endowing a scholarship for an Atlee High School senior in Shane’s memory with a GoFundMe Page.

Christopher Woychak grew up watching and participating in all of these remembrances of Shane. He drove past that same bridge off I-95. While Shane was struck down before having children, part of his legacy is Chris. Not only did that kid follow in Shane’s footsteps, he demonstrates why they serve. No one thing caused Chris to serve, but Shane, Shane’s grandfather and Shane’s family keeping his memory alive all collaborated to inspire Chris.

Every time people pass under that bridge and see that sign over I-95, there is an opportunity to inspire the next, recently promoted, Capt. Christopher Woychak. Now we see why it is important to remember Shane. His service and exhibitions like the new one at the Virginia War Memorial will be part of the inspiration for future warriors. Please join me in making these lives worth remembering this Veterans Day.

Rusty E. McGuire is commonwealth’s attorney of Louisa County and a colonel in the Virginia Army National Guard. He served in Operations Iraqi Freedom and Enduring Freedom.

I write this from a very biased position. I know there will be negative comments, because no one takes the time to know the man over their opi…

A local farmer recently suffered severe injuries inflicted by cattle he was trying to load. These were his own animals raised from birth and s…

EDITORIAL: Virginia's tribe get a seat at the table

It seems like a small thing to grant. After a 414-year land grab, the Commonwealth of Virginia is giving federally recognized tribes some say-…

COMMENTARY: $1.75T spending bill is wrong, and Spanberger knows it

U.S. Rep. Abigail Spanberger (D-7th) got one thing right. President Joe Biden was not elected to be Franklin D. Roosevelt. He was elected on p…

COMMENTARY: From pandemic to endemic and what to expect in the coming months

JOHNSTON: Remembering a day that lives in infamy

I wonder how many people will remember that it was 80 years ago today that the Japanese bombed Pearl Harbor.

EDITORIAL: Saving the fish that saved a nation

In 2004, Fredericksburg witnessed one of the largest explosions since the Civil War. The Virginia National Guard breached the old Embrey Mill …

COMMENTARY: No child is too young to learn about racism

I feel Leonard Pitts’ article, “How young is too young to teach white kids about race?” (Nov. 17, 2021) was extremely relevant from conversations at school board meetings to the divisions in our society today.

REUTHER: Problem solvers seek to work across the aisle

Has the curtain fallen on the American experiment? America’s reputation and position in world affairs sprang not only from the success of its …

Apparently, there will be no literary bonfires in Spotsylvania County anytime soon.

In October 2006, Shane Adcock of Mechanicsville was laid to rest in Arlington National Cemetery.

Chris Woychak in the Boy Scout uniform, with his dad Mike (left) talking to Shane Adcock. 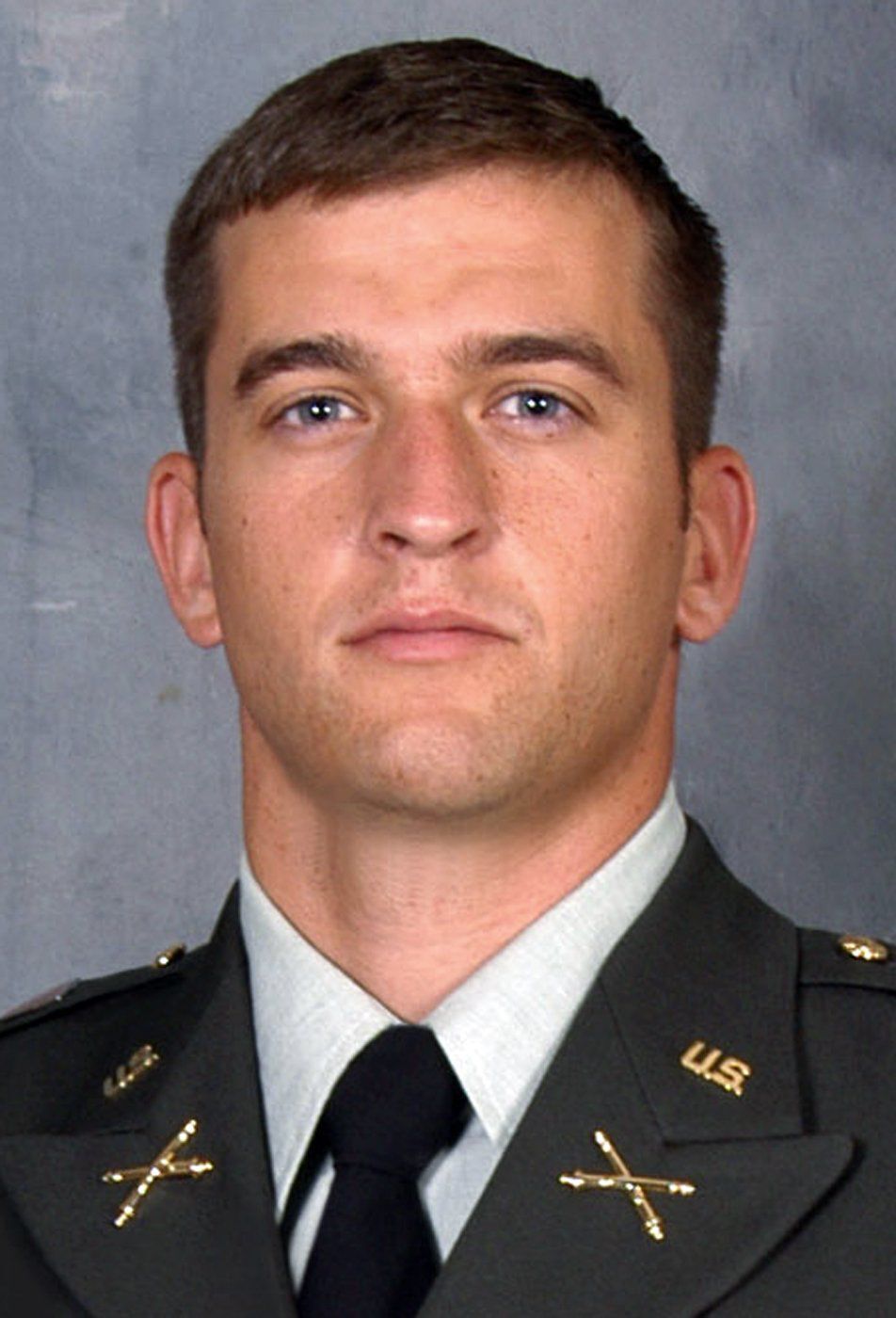