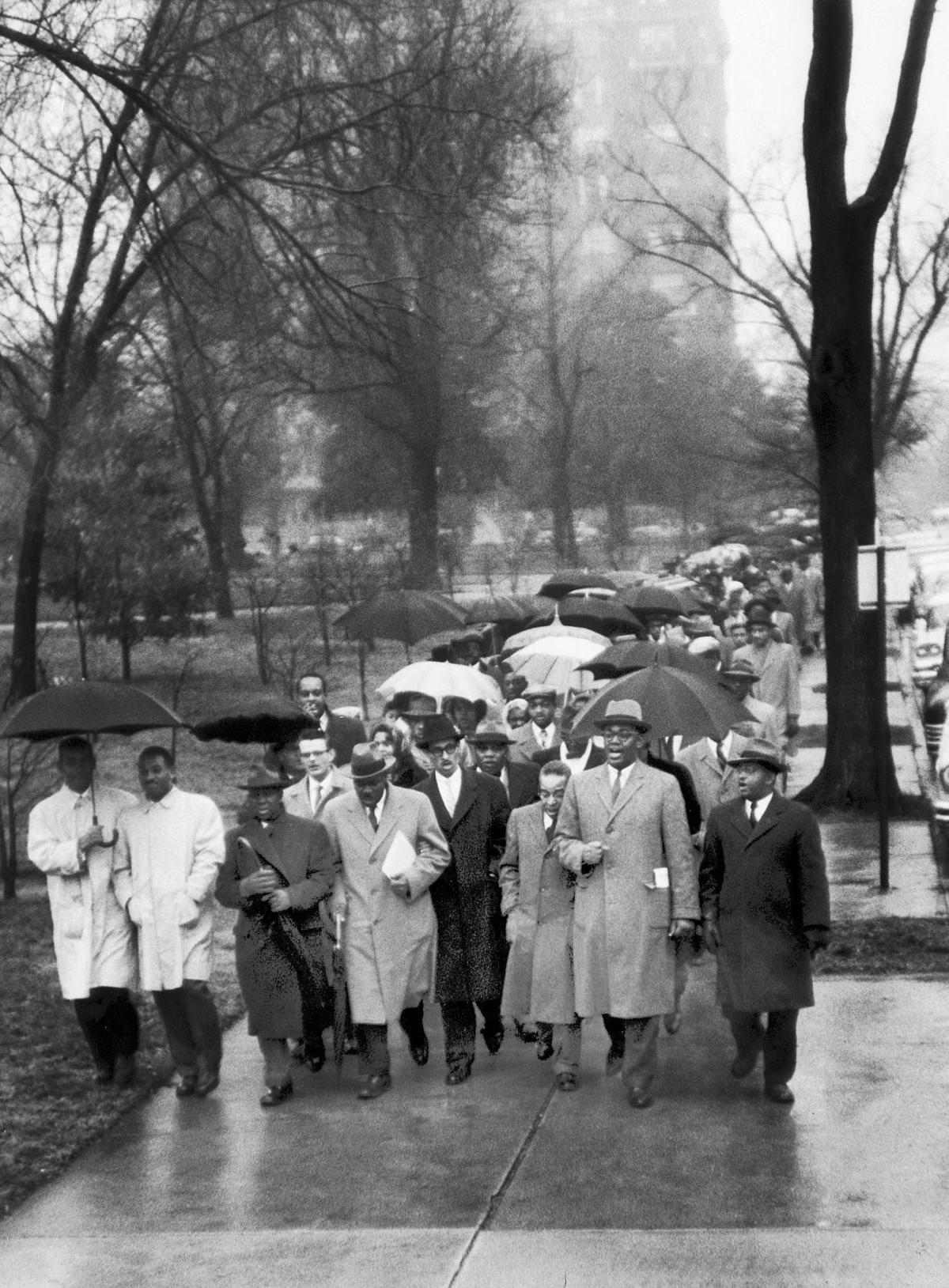 In January 1959, protesters marched through the rain to the state Capitol in Richmond to support school integration. In the midst of the state’s Massive Resistance to the Brown v. Board of Education ruling, protests were mounting across Virginia. 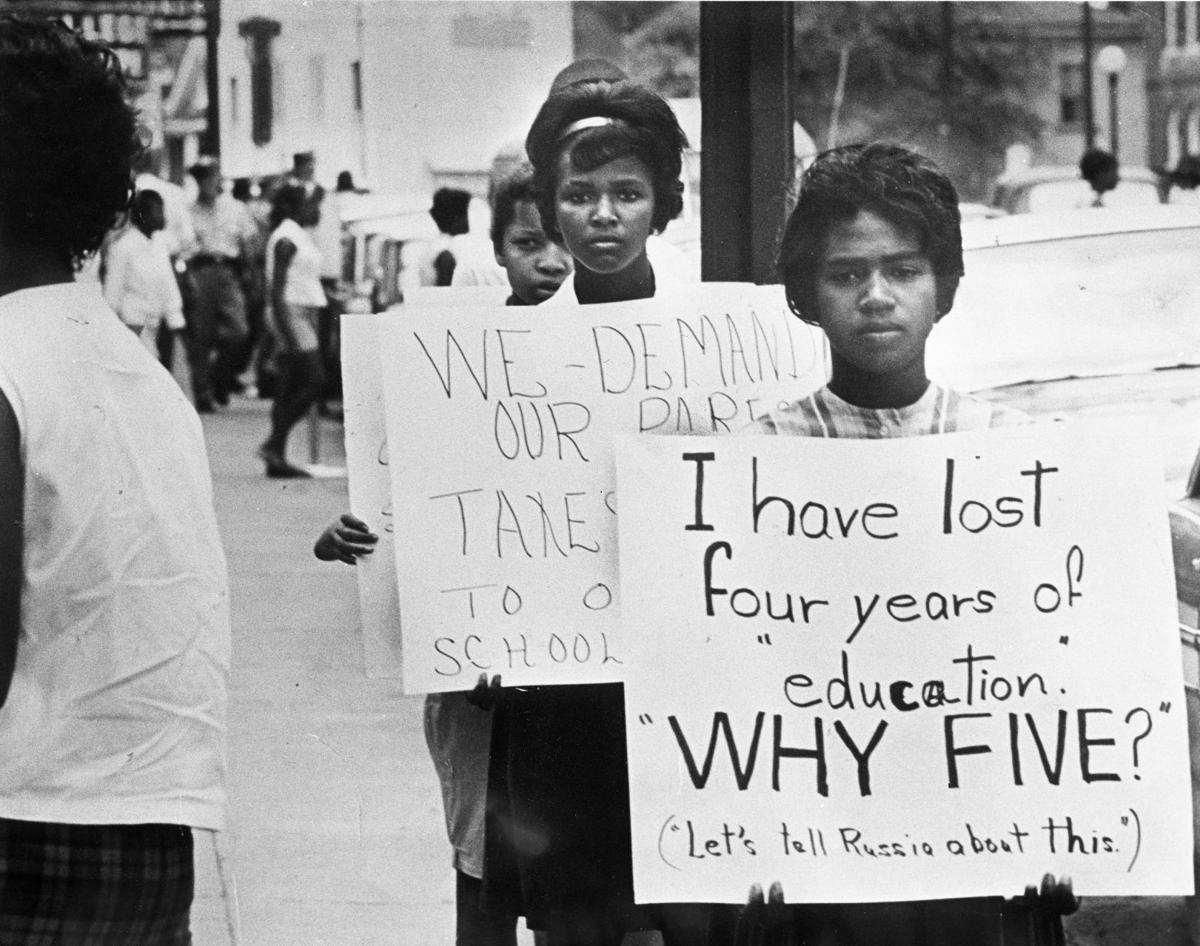 This past week, President Joe Biden spoke with Vice President Kamala Harris and members of the Congressional Black Caucus at the White House.

We never have officially and formally apologized as a nation for slavery.

The 3.95 million human souls held in bondage, according to the 1860 U.S. Census, exceeds the current population of 21 European nations.

And we haven’t said we’re sorry.

Nor has America apologized for the Jim Crow segregation that followed “emancipation” or the institutional, systemic racism that continues to stalk African Americans today.

To call this omission a national disgrace defames the word “disgrace.”

Different resolutions passed by the U.S. House and Senate in different years do not constitute a formal national apology. Most Americans are unaware of them.

President Joe Biden should embrace the moral imperative for our nation to fully and publicly hold itself accountable. On national television, and via every social media platform, he should apologize on behalf of the nation for slavery, Jim Crow and everything done in their name.

An apology directly from the president, rather than pursuing a joint act of the House and Senate, would bypass any partisan attempt to water down the uncompromising sorrow and honesty this apology demands. And it would avoid the possibility of a filibuster.

I am old enough to remember July 20, 1969, when Apollo 11 landed on the moon and the first footsteps were taken on the lunar surface. For that moment, we were one people, watching and listening—even those who thought the space program was money misspent. An apology by Biden would give the nation a “Neil Armstrong moment” of genuine goodness. Unmistakable. Unmissable. Here on Earth where it so desperately is needed.

Some will dismiss such an apology as empty. “Enough words. Give us deeds,” they will say. And they will be correct about the need for action to repair the harm of slavery and Jim Crow. But making a formal national apology would, in itself, be a deed done—and one long overdue.

And it also could help those, myself included, who are advocating for reparations.

In 2003, the commonwealth of Virginia apologized for the five-year eradication of public education in Prince Edward County in Massive Resistance to Brown v. Board of Education, and the state’s role in those 1959-64 school closures. Most whites were educated in a private, whites-only academy, but more than 2,000 African American children in Prince Edward County grew up without a formal education.

That apology provided political and moral support a year later for the fight to create state-funded scholarships for those who had been denied a public education decades earlier by racist opposition to integration. The late Julian Bond called Virginia’s Brown v. Board of Education Scholarship Program and Fund the “first Civil Rights-era reparations in U.S. history.”

It would be a mistake to underestimate the importance of an honest, uncompromising apology as part of meaningful reparations, as a catalyst for healing, which is a vital part of repairing this harm.

In July 2008, the Prince Edward County Board of Supervisors made its own formal apology for the county’s decision to shut down public education in June 1959. Alfred L. Cobbs, Ph.D., who was one of the African American children locked out of school, attended the public delivery of that apology.

Cobbs writes in his memoir, “Locked Out,” that the ceremony “would tax my emotions almost to the breaking point, for it was almost impossible for me to grasp that what was happening was real and not a dream.” As he had witnessed that day’s events, “the flow of tears and the outpouring of emotions seemed to find no end. I had found ... catharsis ...”

The power of a genuine apology is real. I know from personal experience. I am a white man and, in 1997, I publicly apologized for slavery and Jim Crow and everything done in their name. I made that apology when I was editor of The Farmville Herald, based in Prince Edward County, which relentlessly had editorialized in the 1950s and 1960s for Massive Resistance to integration, even if it meant shutting down public education.

I’ve never owned a slave and, as a 2-year-old in 1959, I had nothing to do with the closing of any school. But reaching out across this terrible racist chasm was, and is, the right thing to do.

I made that apology in an auditorium filled with African Americans who had been locked out of school in Prince Edward County when they were children. In that moment, we shared a spiritual exchange that was palpable, like a channel of grace had opened between us.

A moment of genuine power waits on the tip of Biden’s tongue.

Fifteen months after the assassination of the Rev. Martin Luther King Jr., Armstrong and Buzz Aldrin proved that humans could walk on the moon. But 52 years later, we still are deciding whether or not the footsteps of King’s dream will walk by our side.

Stepping onto the lunar surface, Armstrong told the world, “That’s one small step for man, one giant leap for mankind.” An apology by the president on behalf of the nation would be a vital step in our ongoing journey toward one another across the racist pain and sorrow of our past and, all too clearly, our present wrongs.

“I am as clear-eyed as ever that racism has not disappeared from the fabric of the nation, for it is part ... of its DNA,” Cobbs writes in “Locked Out.” “But I feel positive that on that day in Prince Edward County, a group of people made at least a small tear in that fabric and decided to move forward together, beginning a new day with renewed hope and confidence.”

The president’s action wouldn’t be an attempt to redeem the past. No apology ever could. But it would create a moment of national clarity, bringing us all, in a sense, face to face. Here and now.

Whether it becomes part of anything like a giant leap would depend on the words and deeds of those who chose to move forward from that moment together.

But giving us that chance is the right thing for America’s president to do.

Ken Woodley is author of “The Road to Healing: A Civil Rights Reparations Story in Prince Edward County, Virginia.”

LOGAN: Will Culpeper encourage heritage tourism, or enrich a few?

LETTER: To avoid a ruckus, avoid naming sites for people

COMMENTARY: Saving biodiversity one backyard at a time

Joni Mitchell got it right.

EDITORIAL: Infrastructure bill should live up to its name

Back in 2009, Congress passed the Obama/Biden administration’s $800 billion “shovel-ready” infrastructure plan as a way to stimulate the economy and create good-paying jobs fixing America’s crumbling roads, bridges, airports and shipyards. So why, just 11 years later, are our roads, bridges, airports and shipyards still crumbling and in need of trillions of dollars in new federal spending?

Working under Dr. Anthony Fauci, director of NIH’s Institute for Allergy and Infectious Disease, Dr. Kizzmekia Corbett was a lead immunologist on the vast health agency’s hastily assembled Coronavirus Vaccines and Immunopathogenesis Team. When President Donald Trump visited the team in March 2020, Corbett delivered its presentation. Three weeks later, he declared a national emergency. She was already designing animal tests of the vaccine and devising the means for measuring its effectiveness in humans once trials began.

ASK THE VETS: Good pet food, not medication, is the key

Why medicate our pets more than we need to?

EDITORIAL: The opioid epidemic & the problem of pain

Fatal drug overdoses continue to be the top cause of unnatural deaths in the commonwealth, according to preliminary figures recently released …

The Ethical Life podcast: How will today's society be judged in 50 years?

Episode 13: Also discussed is the role luck plays in our lives, and why some people rely more on superstitions and the supernatural instead of logic and science.

In January 1959, protesters marched through the rain to the state Capitol in Richmond to support school integration. In the midst of the state’s Massive Resistance to the Brown v. Board of Education ruling, protests were mounting across Virginia.

This past week, President Joe Biden spoke with Vice President Kamala Harris and members of the Congressional Black Caucus at the White House.