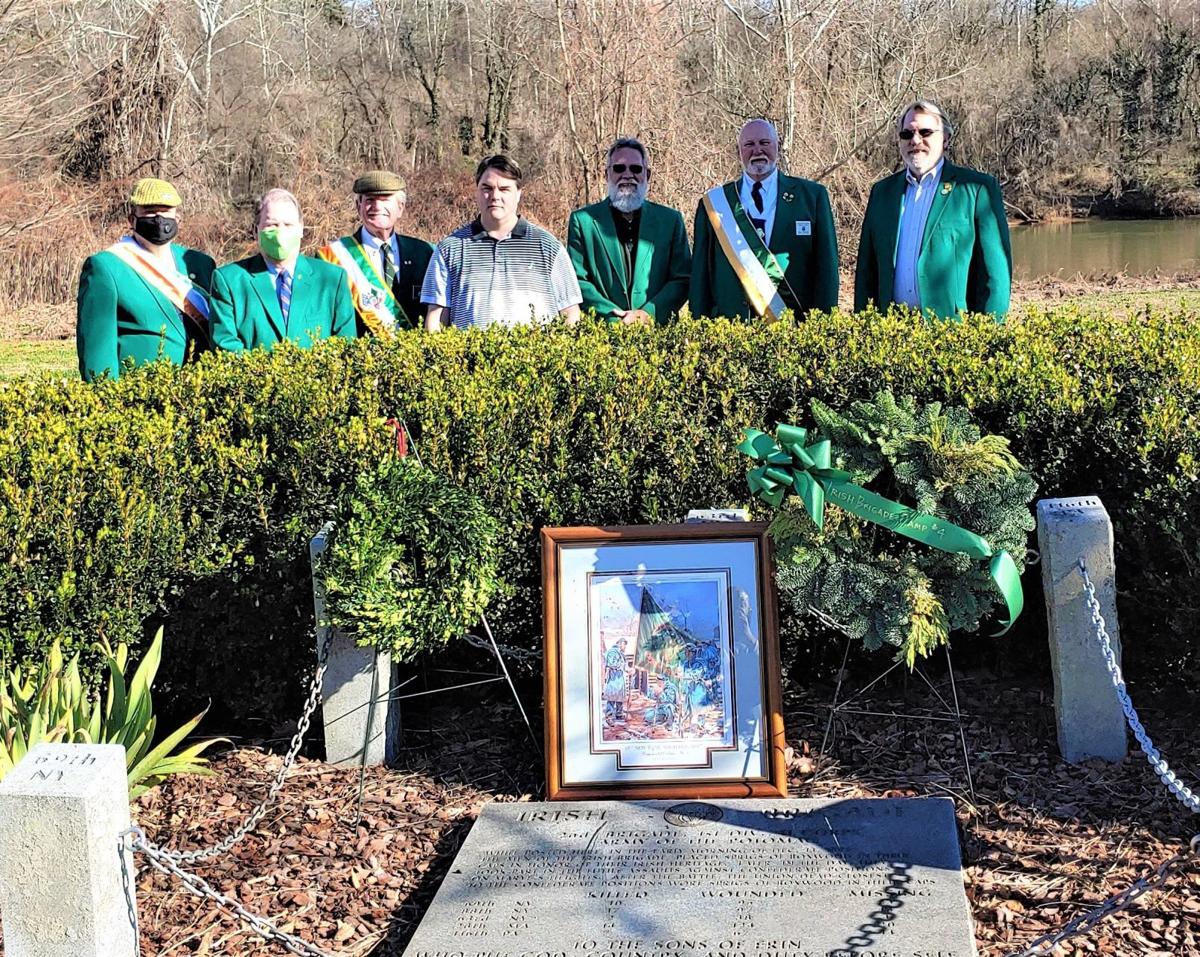 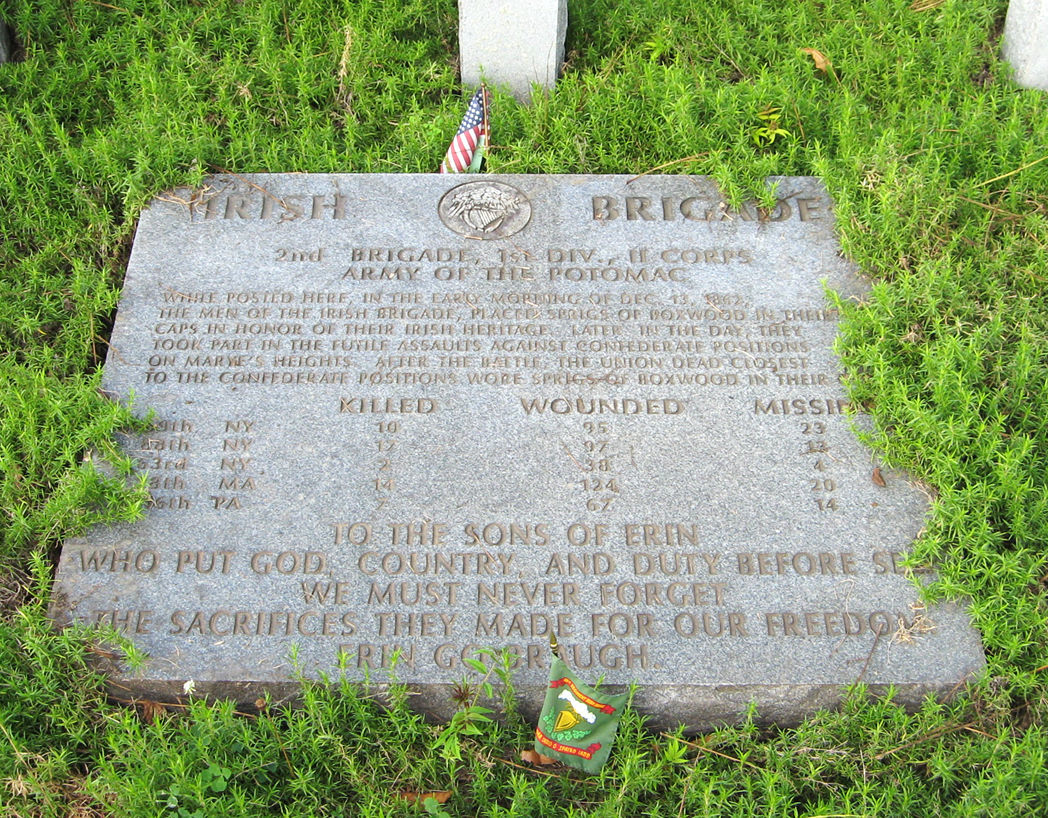 A monument at Fredericksburg’s City Dock to members of the Army of the Potomac’s Irish Brigade commemorates their unsuccessful assault against Confederate along the Stone Wall below Marye’s Heights on Dec. 13, 1862.

Irish American Heritage Month is heralded by presidential and congressional proclamations that celebrate the achievements and contributions of Irish immigrants and their descendants to the fabric of America.

IAHM is also featured on national websites at the Library of Congress, the National Archives and the Smithsonian Institution. Today 39 million Americans claim Irish heritage! And there is plenty of reason to celebrate the feast and the month of St Patrick.

In the 1400s, the Irish were rebelling against English rule. The English wanted a loyal population, so they confiscated Catholic properties and granted ownership to loyal Scottish and English migrants. This occurred primarily in Ulster, Ireland’s northernmost province.

About five generations later, the English ordered all subjects to convert to the official Church of England. The Scots had strong Presbyterian roots and refused. They were labelled “dissenters” and suffered discrimination under the so-called Penal Laws. Thousands decided to leave for America.

The “Ulster Irish” arrived in the colonies as skilled workers, artisans, and merchants. Their first settlement was named Donegal in the Pennsylvania colony. They later populated the Shenandoah Valley.

These Irish immigrants assimilated, prospered and became active in government. In 1776, eight Irish Americans—three born in Ireland—signed the Declaration of Independence.

During the American Revolution, about 35 percent of George Washington’s army was Irish, with 1,500 officers and 25 generals. Commodore John Barry is honored as the “Father of the U.S. Navy.” After the American victory, English leaders lamented the “loss of the colonies to the valorous Irish.”

In the 1830s, another wave of Irish immigrants began to arrive in America. These Irish had lived for generations under Britain’s Penal Laws that officially deprived them of religious freedom, education, and owning land.

In the 1840s, the “Great Hunger” famine further decimated the Irish population and more than 800,000 fled the Emerald Isle, many to Boston and New York. These Irish were poor, unskilled, Gaelic speaking, and Catholic. They did not easily assimilate and faced religious and ethnic discrimination from the Know-Nothings, a major political party based on an anti-immigrant philosophy.

Irishmen labored at menial jobs and in coal mines and canal and railroad construction. Irish women became domestic servants, exposing them to the finer aspects of life and raising their expectations for the American Dream.

In America’s Civil War, these “new” Irish joined the military to gain acceptance in their adopted country. For many it was a “job” providing enlistment bonus money to send home. Others joined to learn the art of warfare in anticipation of a future fight for Irish independence. Few units are as famous as Thomas Meagher’s Irish Brigade, especially here in Fredericksburg.

After the war, the Irish became a political force in major cities. William Grace and Hugh O’Brien were elected the first Irish-Catholic mayors of New York and Boston. The Irish became prominent in the labor movements and the Democratic party where they flourished in politically appointed public positions.

Irishwoman Mary Harris “Mother” Jones organized the United Miners Union, George Meany was elected president of the American Federation of Labor, and Peter McGuire is known as the “Father of Labor Day.” This upward mobility assured that the third generation Irish would be better educated and more successful than their parents and grandparents.

So there is plenty of reason to responsibly celebrate the month of St. Patrick, Irish American Heritage Month, not only with parades and festivals, but also in schools and the media.

Bill Halpin, a retired intelligence officer and graduate school professor, is founder and chairman of the Irish Cultural Center of Virginia, Inc., and past president of the Virginia Ancient Order of Hibernians and Fredericksburg’s General Thomas F. Meagher Division, AOH.

Bill Halpin, a retired intelligence officer and graduate school professor, is founder and chairman of the Irish Cultural Center of Virginia Inc., and past president of the Virginia Ancient Order of Hibernians and Fredericksburg’s General Thomas F. Meagher Division, AOH.

ASK THE VETS: It's best to learn these litterbox basics

I have had cats for many years. I love my cats and try to do everything reasonable to give them a happy and healthy life.

We are a nation of plurality; our diversity is our strength. I would hope that despite where you fall on the political spectrum, you’ll hear m…

In seeking a full eight-year term, Culpeper Circuit Court Clerk Carson Beard has noted his close relationship with his grandfather, the late G…

LETTER: How has COVID affected the price of lumber?

I have noticed the price of plywood 4x8-foot sheets have about tripled in the past couple of months. The price of 2x4s has doubled.

My husband and I have lived on Monument Avenue near the Lee Circle for more than 25 years. We are supportive of all the monuments being removed, as proximity to any Confederate statue never was a factor as to why we bought here.

Conservative talk radio host Rush Hudson Limbaugh died on February 17 at age 70 of lung cancer. The news was received that day with sadness by…

COMMENTARY: The 1948 Executive Order that ended segregation in the military

Until 1948, America’s armed forces —no exceptions—were segregated, and it was a hard segregation too, one carefully embedded in the rules and …

I am writing to express my support for Carson Beard, for Clerk of Culpeper Circuit Court. I have practiced law in Culpeper for more than 32 ye…

A monument at Fredericksburg’s City Dock to members of the Army of the Potomac’s Irish Brigade commemorates their unsuccessful assault against Confederate along the Stone Wall below Marye’s Heights on Dec. 13, 1862.