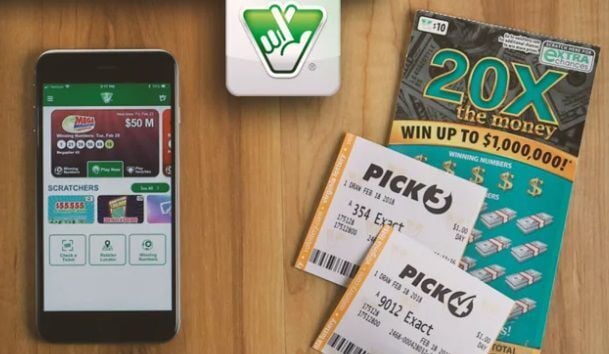 A patron, who did not want to give her name, shows the ticket she had just bought for the Mega Millions lottery drawing at the lottery ticket vending kiosk in a Smoker Friendly store, Friday, Jan. 22, 2021, in Cranberry Township, Pa. The jackpot for the Mega Millions lottery game has grown to $1 billion ahead of Friday night’s drawing after more than four months without a winner.

BY THE EDITORIAL PAGE STAFF OF THE FREE LANCE-STAR

As the one-year anniversary of the first confirmed COVID-19 case in the commonwealth on March 7 approaches, most Virginians will look back on the past 12 months when a microscopic virus upended their lives with a combination of sadness, fear and frustration. It was a dark year, indeed, but there were a few bright spots amid the gloom.

While most businesses and government bodies had to grapple with lost revenue in addition to increased costs caused by the pandemic, the Virginia Lottery reported a 37 percent increase in revenue for the second half of 2020 over the same time in 2019. And after paying off the winners, the Lottery’s profit on $1.48 billion of total sales during the last six months of 2020 was a not-too-shabby $350 million.

Lottery officials credit the substantial increase in revenue during the last six months of 2020 to big Powerball and Mega Millions jackpots, and to the launch of its mobile app.

The Lottery’s windfall is something to celebrate because the money will be handed over to the state Department of Education, which will then distribute it to local school divisions on a per-pupil basis.

If lottery sales continue at the same rate as the last six months, the amount of money raised for education would increase to around $700 million. Early returns on the iLottery app authorized by the General Assembly seem to indicate that not only has the app not cut into sales at the commonwealth’s brick-and-mortar stores, it has also increased participation in the lottery.

It’s easy to see why. A lot of people are still either stuck at home social distancing, or social distancing at work. They miss the intimate interaction and gatherings with family members, friends, neighbors and colleagues that they used to enjoy. They’re worried about their finances. And after long hours alone spent staring at computer screens, they’re desperate for something to look forward to.

Despite the stories of misfortune and woe that have befallen past lottery winners, most people fantasize about hitting it big one day and never having to worry about money again. When purchasing a lottery ticket is as easy as a few taps on your mobile phone, it’s easy to act on those fantasies.

And win or lose, the money spent on lottery tickets goes to educating children in the commonwealth. That’s an unexpected silver lining in the COVID-19 playbook.

Conservative talk radio host Rush Hudson Limbaugh died on February 17 at age 70 of lung cancer. The news was received that day with sadness by…

I am writing to express my support for Carson Beard, for Clerk of Culpeper Circuit Court. I have practiced law in Culpeper for more than 32 ye…

In seeking a full eight-year term, Culpeper Circuit Court Clerk Carson Beard has noted his close relationship with his grandfather, the late G…

LETTER: Carson Beard is qualified as Clerk of Court

I’m writing to express my support for Carson Beard in the March 30 election for Clerk of the Culpeper Circuit Court.

February is National Pet Dental Health Month. For three decades, veterinarians around the country have been using this month as an extra oppor…

LETTER: News outlets have a different take on Jan. 6, other events

In the aftermath of the Jan. 6 events, Matt Walsh of the Daily Wire reported on Feb. 10 that the five who died were not beaten to death or sho…

EDITORIAL: Some Virginia Democrats have lost touch with their heritage

It’s fashionable — and correct — these days to point out how many Republicans have lost touch with their party’s heritage. Some on the right like to call those closer to the center-right “RINOs,” meaning “Republicans in name only.”

A poll gauging the degree of respect for leadership in substantial organizations and institutions found that Congress was lowest on the list, …

LETTER: Thanks to all who support preventing suicide

On behalf of Team Jordan, I would like to express sincere gratitude and appreciation for all who contributed to our recent fundraiser held on …

The Jan. 31 Star-Exponent article, “Culpeper Clerk of Court Tasked with Many Responsibilities,” provides an astounding list of tasks for which…

A patron, who did not want to give her name, shows the ticket she had just bought for the Mega Millions lottery drawing at the lottery ticket vending kiosk in a Smoker Friendly store, Friday, Jan. 22, 2021, in Cranberry Township, Pa. The jackpot for the Mega Millions lottery game has grown to $1 billion ahead of Friday night’s drawing after more than four months without a winner.