Subscribe
Read Today's E-Edition
Share This
WILLIAMS: Gov. Youngkin's "critical race theory" order is the epitome of systemic racism. Leave MLK out of it.
2 comments
Share this
1 of 2 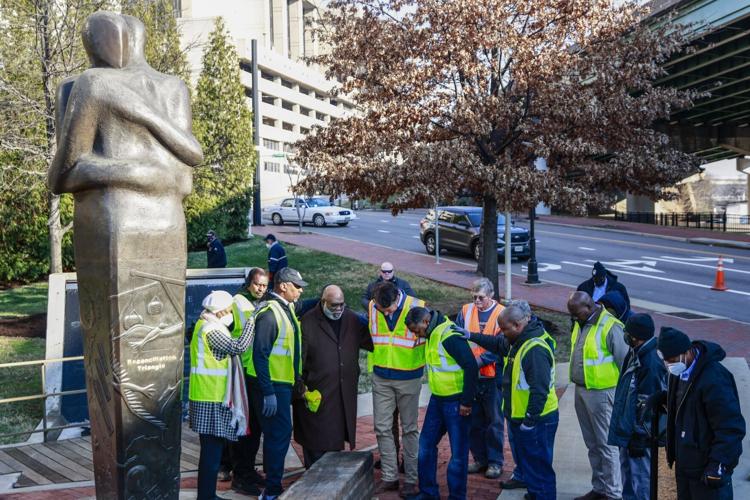 Governor-Elect Glenn Youngkin participates in The Spirit of Service Day of Service on Friday, January 14, 2022 at Reconciliation Triangle Statue in Richmond, Virginia.

As he settles into office, Gov. Glenn Youngkin looks an awful lot like one of those “inherently divisive concepts” he seeks to ban from the classroom.

It’s one thing to campaign to a soundtrack of dog whistles and yet another to pitch your governance that way.

Youngkin’s first executive order—note the priority—is part of the Republican Party’s orchestrated obsession with “critical race theory,” a term they use to refer to schoolhouse lessons on systemic racism. The governor seeks to purge K-12 education in Virginia of “inherently divisive concepts”—a term so utterly vague and subjective as to be meaningless and unenforceable.

Over the years, when someone accuses me of being divisive, it’s invariably an attempt to shut down conversation on race. Exasperated, they argue that racism would disappear if only people like me would stop writing about it. Ultimately, I’m told that I’m the real racist.

When conservative politicians dip into this toolkit, it’s to proclaim that the Rev. Martin Luther King Jr. is on their side. Invariably they’ll use the same shopworn quote.

Youngkin’s text paraphrases a passage of King’s 1963 “I Have a Dream” speech in asserting that schools should teach children to think for themselves and be provided the facts and context necessary to understand important events—assertions at odds with the intent of the order. “Only then will we realize Dr. Martin Luther King Jr.’s dream that our children ‘will not be judged by the color of their skin but by the content of their character,’” he says.

On behalf of facts and context, I’ll note here that King explicitly expressed that dream for “my four little children.”

Youngkin’s order is about protecting the feelings of white children, even at the expense of their education. In what it seeks to omit, it’s right-wing political indoctrination and the epitome of systemic racism.

Frankly, many of King’s own words might be deemed “too divisive” for Youngkin’s edict.

The most relevant quote for this situation is not from the “Dream” speech, but King’s 1967 book, “Where Do We Go From Here: Chaos or Community?”

“Whites, it must frankly be said, are not putting in a similar mass effort to reeducate themselves out of their racial ignorance. It is an aspect of their sense of superiority that the white people of America believe they have so little to learn,” King wrote.

He added: “Loose and easy language about equality, resonant resolutions about brotherhood fall pleasantly on the ear, but for the Negro there is a credibility gap he cannot overlook. He remembers that with each modest advance the white population promptly raises the argument that the Negro has come far enough. Each step forward accents an ever-present tendency to backlash.”

Youngkin’s executive order is the latest expression of that backlash in Virginia, even as those on the American Right seek to sanitize King and enlist him in their cause. And his daughter, Bernice King, is not amused.

“Fear mongering regarding #CRT is intended to usher in the banning of any teaching of substance on the history of slavery and racism and on current devastation of racism,” King, CEO of The King Center, tweeted in October.

“I oppose these efforts. And I oppose quoting my father to facilitate that fear and accomplish that banning.”

Youngkin, in his order, gives an obligatory nod toward teaching about “the horrors of American slavery and segregation, and our country’s treatment of Native Americans.” But then, he absurdly opines that “critical race theory and related concepts are teaching our children to engage in the very behavior the Constitution prohibits.”

This all-consuming concern over “inherently divisive concepts” and the Constitution is rich coming from a member of a political party in thrall to a former president so divisive that he inspired an insurrection that the vast majority of GOP lawmakers are loath to acknowledge or investigate.

We’re a nation rife with division over such crucial issues as climate change, reproductive rights and public health policy during a pandemic, just to name a few.

Youngkin’s legally dubious attempt to micromanage classroom instruction is antithetical to education and democratic discourse. How can you teach students how to think for themselves if government declares subjects off-limits?

Not content to misappropriate King’s message, Youngkin—as part of a service event on the MLK holiday—tossed mulch around the Reconciliation statue in Shockoe Bottom. But demonizing antiracism in public policy is hardly in the spirit of truth, reconciliation and repair.

If Youngkin and other politicians want to stifle the interrogation of systemic racism, they should quote George Wallace, Donald Trump or Tucker Carlson. Keep King’s words out of your mouth.

January 18, 2022: Check out A1 Minute NOW – Gov Youngkin on state of Commonwealth; Baseball stadium will be the hub for development project; Grace Christian School broke ground on $6M expansion.

Governor-Elect Glenn Youngkin participates in The Spirit of Service Day of Service on Friday, January 14, 2022 at Reconciliation Triangle Statue in Richmond, Virginia.