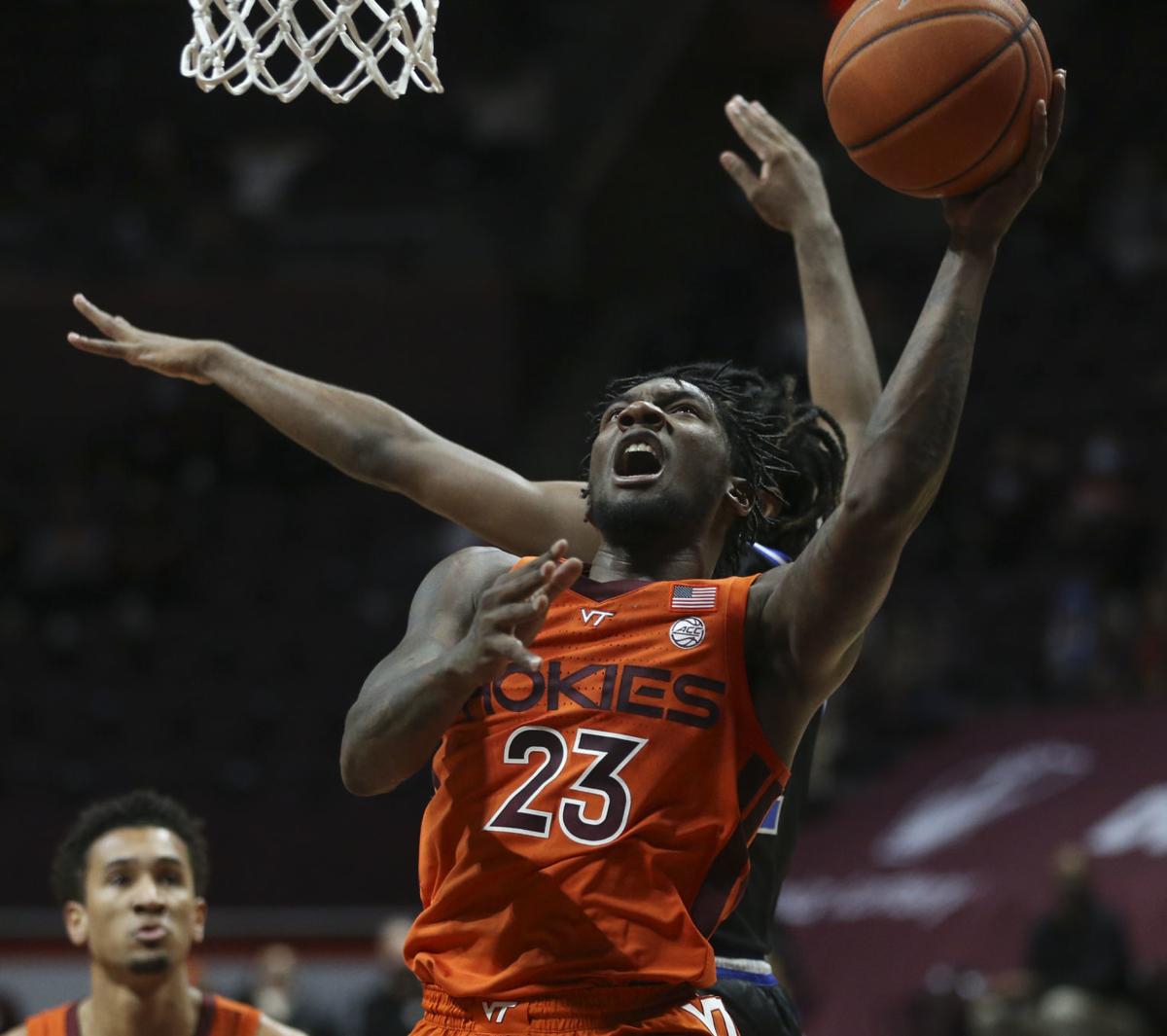 Virginia Tech’s Tyrece Radford (23) has the ball stolen from him by Dukes’s DJ Steward (2) in the first half of an NCAA college basketball game in Blacksburg, Va., Tuesday January12 2021. (Matt Gentry/The Roanoke Times via AP, Pool)

But when the game got tight, Tech’s own individual talent showed up just fine.

Tyrece Radford, Keve Aluma and Jalen Cone each took turns seemingly sing-handedly holding off the No. 19 Blue Devils, as the No. 20 Hokies held on for a 74-67 win, Tech’s third over a ranked foe this season.

“I’ll take nothing away from my guys. I’ve got good players also that have played a lot of basketball around here now,” said coach Mike Young. “I like my team and the things each individual brings to the unit.”

Radford scored 14 of his 18 points in the first half, helping Tech jump out to an early lead. Aluma got 13 of his 17 in the second half, helping to hold off a Duke surge, and potentially sealing the win with a blocked shot on Jeremy Roach with 1:25 to go.

And Cone, as he has in each of the past three games, proved unguardable at times on the perimeter, finishing 3 for 5 from 3-point range and contributing 14 points.

For the first time this season, Cassell Coliseum hosted a Top 25 matchup, with both Tech and Duke (5-3, 3-1) in the national rankings this week. And accordingly, Tech drew its largest home crowd this year, using almost all of its 250 capacity limit of family and friends of players and staff.

Virginia Tech came out aggressively on both ends of the floor, forcing five turnovers in the first nine minutes of play, and shooting well at the onset. The Hokies hit 6 of their first 8 shots, including all three of their 3-point attempts, to jump out to a 17-7 lead.

A 12-0 run, fueled by Cone and Aluma, pushed Tech’s advantage to 29-12 midway through the first half.

Duke outscored the Hokies 18-10 over the final seven minutes of the half, but Radford made sure the home team kept the lead during that time, scoring all 10 of Tech’s points.

The Blue Devils trailed 46-34 at halftime.

They opened the second half with a vengeance, using a 6-0 run to get within 46-40 early in the period.

Duke’s leading scorer, Hurt, held in check for the first half, scored eight straight – hitting two 3-pointers and a 12-foot fadeaway jumper, to trim Tech’s edge to a single point at 56-55 with 13:21 left.

But on the other side, the Hokies’ leading scorer – Aluma – was going to work, as well. He scored seven in a row for Tech to help keep the lead.

After outrebounding Notre Dame 41-24 in a win Sunday, Tech coach Mike Young noted the importance that statistic would have Tuesday night against the Blue Devils. And his players heeded his call, remaining competitive on the glass all game long.

Former Episcopal star Henry Coleman, a freshman at Duke, didn’t make the trip with the Blue Devils. Coleman is ill, though he has tested negative for COVID-19.

The Hokies play at Wake Forest on Sunday night.

No. 19 Virginia Tech dominates Notre Dame on the glass in 77-63 win

BLACKSBURG — Going into this basketball season, Mike Young expected his Virginia Tech team to be far more competitive rebounding than it was a year ago. The Hokies had assembled a far bigger and deeper frontcourt than they had in Young’s first season.

Despite all the hurdles, CFP title game has arrived with No. 1 Alabama taking on No. 3 OSU in Miami

There was a point in August where having a season appeared to be greatly at risk, let alone reaching the College Football Playoff national championship game.

Virginia Tech’s Tyrece Radford (23) has the ball stolen from him by Dukes’s DJ Steward (2) in the first half of an NCAA college basketball game in Blacksburg, Va., Tuesday January12 2021. (Matt Gentry/The Roanoke Times via AP, Pool)