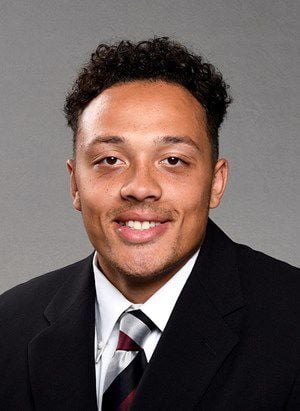 When Brent Pry was an assistant coach at Penn State, he showed interest in Jason Brown but ultimately didn’t offer the Chancellor High School quarterback a scholarship.

However, Pry built a relationship with Brown and several other Chargers as former Chancellor defensive end Yetur Gross-Matos went on to star for the Nittany Lions.

He’s entering his first year as the head coach at Virginia Tech, and Brown was seeking a home after entering the transfer portal following one season at South Carolina.

Brown announced on Twitter Thursday that he’s committed to the Hokies.

He said he made the decision last week but was waiting to make the announcement, tweeting “I’m coming’ HOME!” and thanking the South Carolina coaching staff and fans for their support in his brief time in Columbia.

He’ll have some competition, though. Grant Wells, Marshall’s starting quarterback for the past two seasons, also joined the Hokies through the transfer portal Thursday.

Brown will enroll in Virginia Tech Jan. 14 as a graduate transfer and will pursue his second undergraduate degree, this one in communications.

He said he’s thrilled to finally unite with Pry.

“Coach Pry was the one at Penn State who recruited me, Yetur, George [Brown] and E.J. [Jenkins],” Brown said. “So yeah I definitely thought [Virginia Tech] could be an opportunity for me. I’ve always wanted to play for him because he’s a good dude. I’ve known him for quite some time.”

Brown said Pry messaged him and told him that he was doing a good job at South Carolina.

Brown made seven appearances and went 2-2 as a starter. He completed 60 of 108 passes for 721 yards, eight touchdowns and six interceptions.

He helped lead South Carolina to wins over Florida and Auburn. He announced he was entering the transfer portal before the Gamecocks’ Duke’s Mayo Bowl game win over North Carolina.

Brown said after his experience in the Southeastern Conference he’s eager to test himself against Atlantic Coast Conference competition.

“The experience in the SEC was great, getting to play in the best conference in college football,” Brown said. “When I got the opportunity I made the most of it … It was tremendous having an opportunity to play on the biggest stage in front of the biggest crowds in college football. I’m excited to go to Virginia Tech and in the ACC and see what I can do there, as well.”

Brown graduated from South Carolina last month. He spent the previous three years at St. Francis (Pa.). As a redshirt sophomore in 2019, he was an honorable mention FCS All-American selection and was named second-team all-Northeast Conference. He led the NEC in passing yards (3,084) and touchdown passes (28) and set school records in each category.

Jenkins was one of his top receivers at Chancellor and St. Francis and joined him at South Carolina, as well. Jenkins responded to Brown’s message on Twitter that he was proud of his former teammate because “the grind to get to his dream school [Virginia Tech] was unbelievable.”

Jenkins, who now plays tight end, has a year of eligibility remaining. Brown said he has no insight on if Jenkins will remain at South Carolina after graduation this spring or move on to another program.

CHARLOTTESVILLE – Virginia got bullied and battered in Saturday’s loss at North Carolina. Francisco Caffaro wasn’t about to let it happen again.

CHARLOTTESVILLE – Tony Elliott has been using the acronym H.E.A.R.T as he’s explained what he’ll demand from his Virginia football team in his first year as a head coach – humility, effort, accountability, respect and toughness.

CHARLOTTESVILLE –When he was introduced as Virginia's next football coach last week, Tony Elliott laid out his vision of what the program could become.

Reigning national champion Baylor isn’t showing any sign of loosening its grip on No. 1.

Alabama's Bryce Young and Georgia's Stetson Bennett both transferred in 2018. One got a lot more attention than the other.

A wild week of upsets led to big changes in the AP Top 25. Amid the chaos, a familiar team returned to the top.