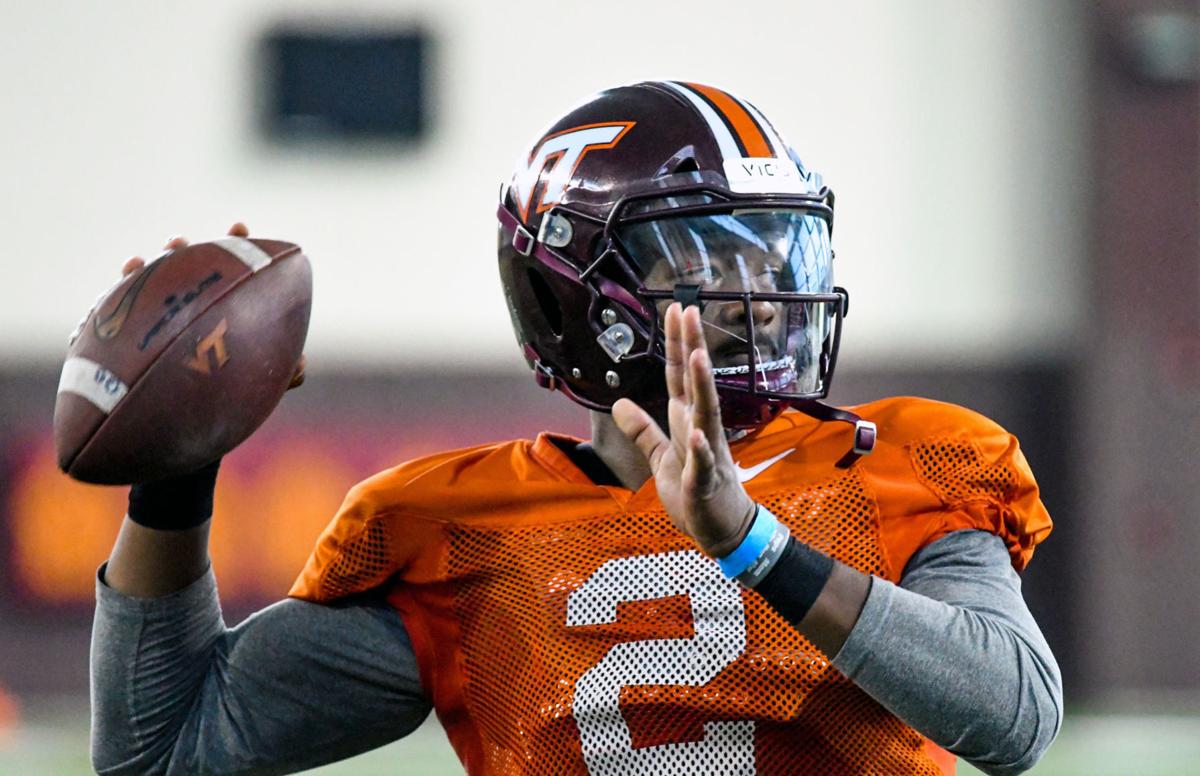 Hendon Hooker is listed at the top of Virginia Tech’s quarterback depth chart for Saturday’s game against N.C. State. 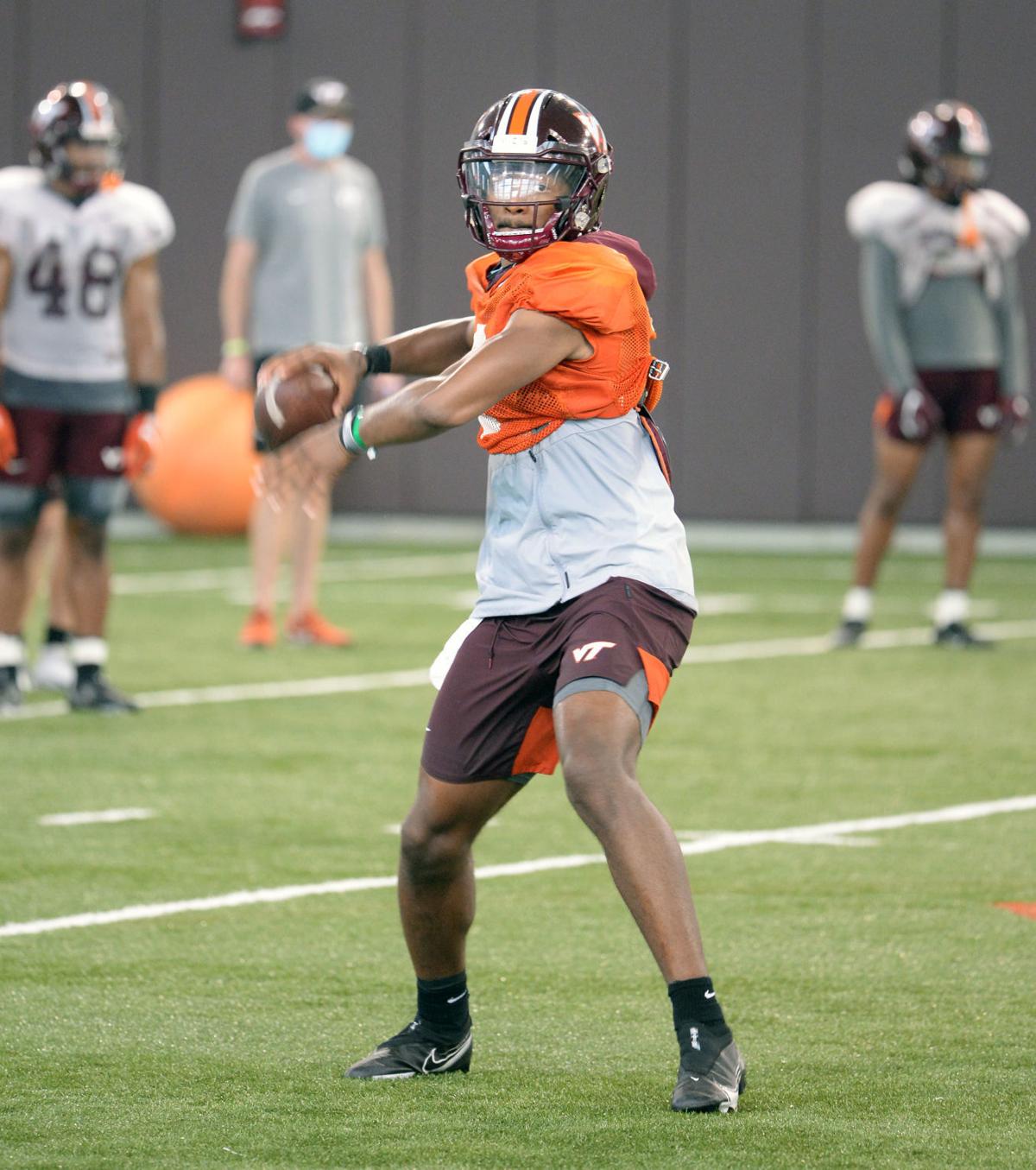 Hendon Hooker, currently listed at the top of the depth chart at quarterback, throws during practice.

By Mike Niziolek tHE rOANOKE TIMES

BLACKSBURG—Virginia Tech announced a depth chart on Monday for its season-opening football game against N.C. State.

Tech coach Justin Fuente put together the two-deep as if he would have his full roster available, but he expects an unspecified number of players listed won’t be available on Saturday as the program continues to grapple with COVID-19 related issues.

“We will not have a full roster,” Fuente said. “I hope we are able to play. We still have three more tests this week, I mean we have one today, we got one Wednesday and we got one Friday. Taking it day by day.”

The Hokies were forced to postpone their game against Virginia with what athletic director Whit Babcock described as a “significant” number of players sidelined from testing positive or contact tracing.

Players that test positive are held out at least 10 days and players in quarantine must sit out a full 14 days (and can’t test out of it).

“I think we’re all living in a test-by-test world right now,” Fuente said. “So we’ll see as they come and hopefully everything works out fine and it all works out. I’m not trying to raise alarm but I’m also not trying to, I’m just being honest with the situation we’re in.”

Fuente addressed the depth chart—a two-deep with eight starters returning on both sides of the ball—without revealing who might miss Saturday’s opener.

He started out by clearing up an error that left Tayvion Robinson off the list of punt returners that included Khail Herbert, Raheem Blackshear and Keshawn King.

“I would say that would be referred to as a mistake,” Fuente said. “Yeah, and we have been shuttling guys around a lot, but if we played right now, Tayvion would run out there and return punts. Those other guys have worked back there and have been really good. I’m excited about them, but that’s a mistake.”

Robinson, a 5-foot-10, 187-pound sophomore out of Virginia Beach, took over the role late last season. He returned 13 punts for 185 yards (14.23 yards per return). His 35-yard punt return against Virginia was the team’s longest of the season.

The biggest surprise on the roster was at boundary safety, where Keonta Jenkins is listed at No. 1 on the two-deep ahead of fellow true freshman Lakeem Rudolph. Devon Hunter was expected to start at the position, but he was indefinitely suspended last week after being arrested on two assault-related charges.

Tech could have gone with a more experienced option like Tyree Rogers, a fifth-year senior who has played in 31 career games and made three starts, but he’s listed as Divine Deablo’s backup at free safety.

Jenkins was a standout among the team’s 2020 signees during fall camp. The 6-foot-3, 194-pound was a three-star signee out of Jean Ribault High School in Florida.

“Keonta Jenkins is one [freshman] on the defensive side that’s a young player that has shown a lot of promise and ability to pick up things pretty quickly,” Fuente said in August.

Fuente said that things could change quickly in the secondary given the team’s overall lack of depth after losing Hunter, Nasir Peoples (injury) and Caleb Farley (opted out).

“That’s created a little sense of urgency with those young guys,” Fuente said. “We do still have some guys on that depth chart that can play multiple positions. We are a little bit thin and we’ll have to do a good job as we go through the season, hopefully, being able to cross train guys in those five defensive back positions to be able to play a couple different spots.”

On offense, the most notable change came on the offensive line, where Brock Hoffman is listed as Tech’s starting center and Bryan Hudson at right guard. Hudson started 10 games at center as a true freshman in 2019 while Hoffman sat out as a transfer from Coastal Carolina.

The rest of the starting offensive line is the same as last year, with Christian Darrisaw at left tackle, Lecitus Smith at left guard and Luke Tenuta at right tackle. The odd man out is Doug Nester, who started 10 games at right guard last year, and is listed as the team’s backup right tackle.

“That’s the more natural spot for those guys,” Fuente said of Hudson and Nester. “I have no problem sliding Doug inside as well, that’s where he played last year. We already know this, we will have to be versatile and move guys around. I’m thankful we have as many guys as we do have that have played and at times played well. I think those are the natural spots in a perfect world, but I also believe that they will be mixed around a little bit.”

Fuente committed once again to playing both Hendon Hooker and Braxton Burmeister at quarterback. Hooker is listed No. 1 on the depth chart followed by Burmesiter and Quincy Patterson.

“That’s the plan, and yes that’s an ongoing process in how that’ll exactly work,” Fuente said. “It’s going to be all hands on deck, so we’re going to need everybody to try to find a way to have success. I would say how that looks may change from day to day based on the information we have.”

“I believe we’ll have a year of college basketball that people will enjoy,” North Carolina coach Roy Williams said.

‘That had me really hyped’: Virginia Tech quarterback Hendon Hooker running with confidence

Though his coach is less enthusiastic about the risk taking, Hendon Hooker got a charge out of taking the ball to the end zone.

On Wednesday, the Naismith Memorial Basketball Hall of Fame and Gazelle Group announced a season-opening event that will occur at Mohegan Sun Arena in Connecticut, and the Cavaliers are one of the four teams included.

WINSTON-SALEM — Virginia Tech just couldn’t get out of its own way on Saturday at Truist Field.

Justin Fuente makes it clear No. 19 Virginia Tech has many areas in which it needs to improve.

Hendon Hooker is listed at the top of Virginia Tech’s quarterback depth chart for Saturday’s game against N.C. State.

Hendon Hooker, currently listed at the top of the depth chart at quarterback, throws during practice.