Liberty quarterback Malik Willis (7) celebrates with teammates after the team’s overtime win over Coastal Carolina in the Cure Bowl. 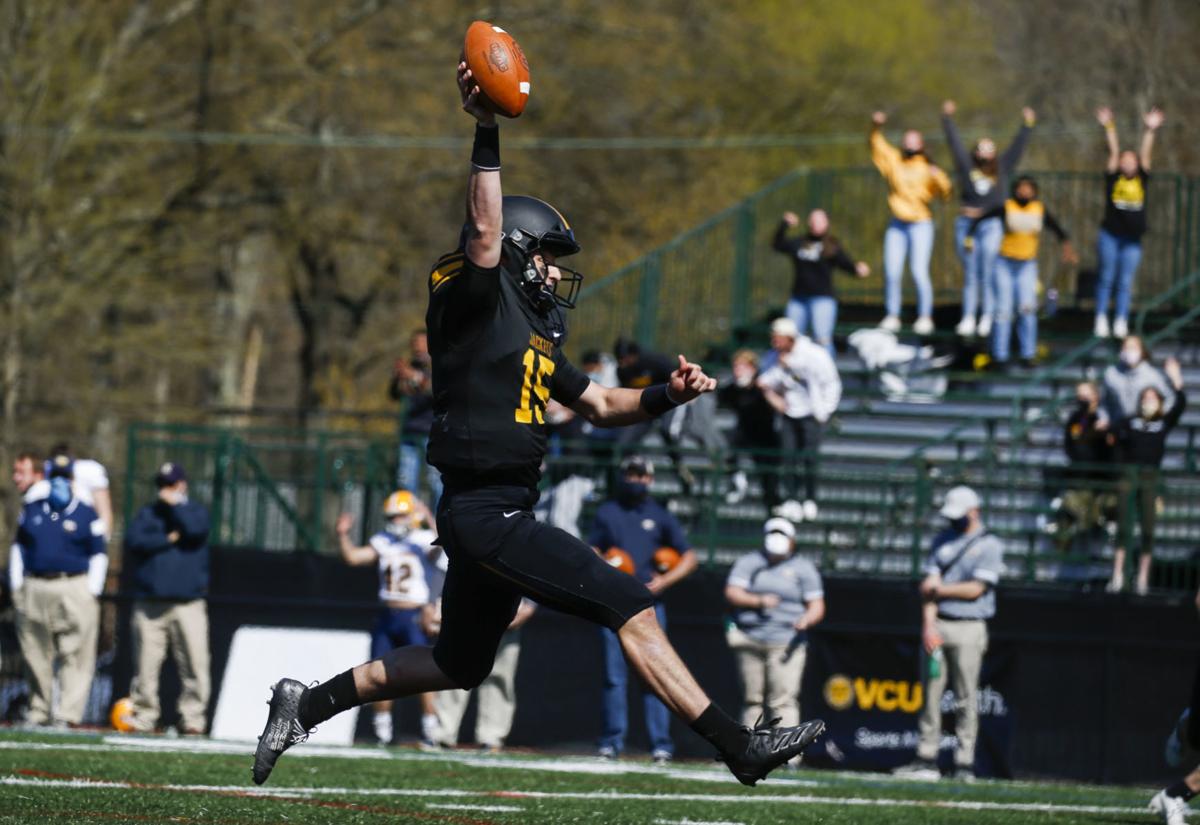 One vote was a nail-biter, one was unanimous. Both award winners were quarterbacks who lifted their teams this season.

The Lanier Award, given to the best small-college player, went to Randolph-Macon’s Presley Egbers, a sophomore who led the Yellow Jackets to an undefeated season and the ODAC title.

Egbers received all 10 first-place votes from the selection panel.

Willis, a dual-threat quarterback who rewrote the Flames’ record book, led Liberty to a 10-1 season with upset victories over Syracuse and Virginia Tech. The Flames—ranked 17th in the final Associated Press Top 25 poll—capped their season with a 37-34 victory over then-No. 9 Coastal Carolina in the Cure Bowl in Orlando, Fla.

“I’m thankful and very humbled,” Willis said in accepting the award. “I’m just so thankful to my family and friends, coaches and teammates, and God most of all.

“I just really appreciate this honor, and I’m glad to join the ranks of great athletes that came before me.”

He follows on the heels of another dual-threat quarterback, UVA’s Bryce Perkins, who won the Dudley in back-to-back years. If Willis returns to Liberty in the fall, he’ll have the opportunity to become the fourth two-time recipient of the award.

With the announcement, Liberty became the seventh school to produce a Dudley winner.

Because of the pandemic, the awards ceremony was moved from December to allow schools that opted to play in the spring the opportunity to finish their seasons.

Instead of an in-person banquet, the ceremony was televised on WTVR 6.

Egbers, the Randolph-Macon sophomore quarterback, is the second Yellow Jackets player to win the Lanier Award, following in the footsteps of running back Will McGhee in 2013.

“I want to thank our coaching staff,” Egbers said. “They put in a lot of hard work, a lot of late nights and early mornings, and without them, I don’t know where our program would be.

“I also want to thank my teammates. A motto our team follows is, ‘The team, the team, the team,’ and I feel like that’s why we were so successful this spring is because we all came together as a team.”

The ceremony also included the presentation of the annual Touchdown Club of Richmond postseason awards.

VMI’s Scott Wachenheim was named the Division I coach of the year, and Randolph-Macon’s Pedro Arruza won the award at the small-college level.

The Wells Fargo Advisors Humanitarian of the year was Terrell Jana, a wide receiver at UVA.

Both Willis and Egbers thanked the colleges for working to put on a football season during the pandemic.

“We just had to battle through and stick together,” Willis said of the challenges. “Now we’re just looking forward to a great 2021 season.”

The Virginia baseball team’s NCAA Tournament fate hangs in the balance with just two ACC weekends left on the schedule.

UVA lacrosse out to defend 2019 title, and these 'Hoos may be on a similar path

In 2019, despite a 1-2 start, the Cavaliers won the national championship. The 2020 tournament was canceled due to COVID-19, and now, Tiffany sees parallels between this year’s group and the title winning squad.

Two of the three finalists represent schools that have never produced a Dudley winner. The awards show will air Saturday night on CBS 6.

College basketball players are transferring at a record rate. What does it mean for the sport?

It began as an idea, a hopeful notion that might one day become something more.

Liberty quarterback Malik Willis (7) celebrates with teammates after the team’s overtime win over Coastal Carolina in the Cure Bowl.