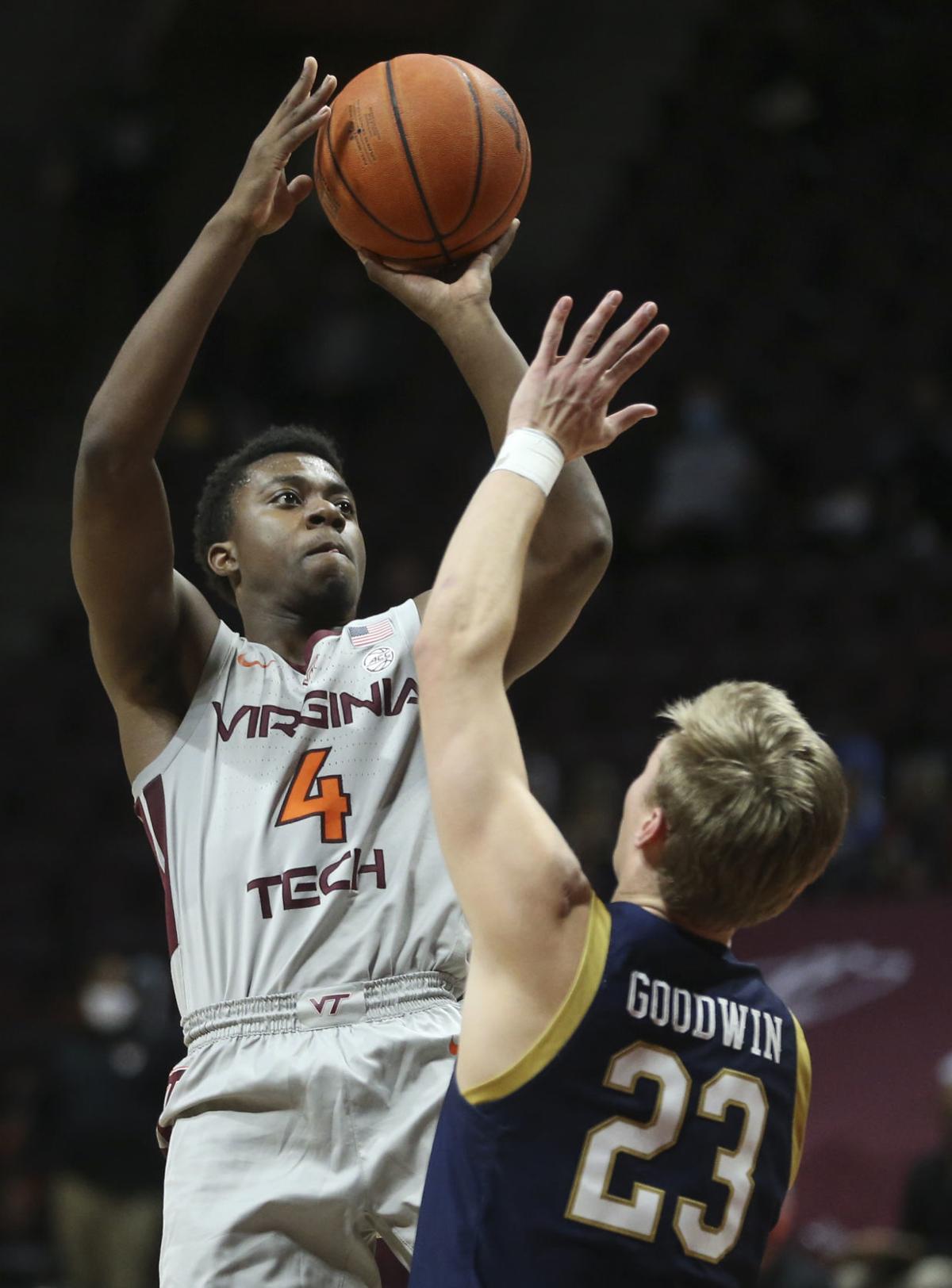 Virginia Tech’s Nahiem Alleyne shoots over Notre Dame’s Dane Goodwin in the first half of the Hokies’ home win. 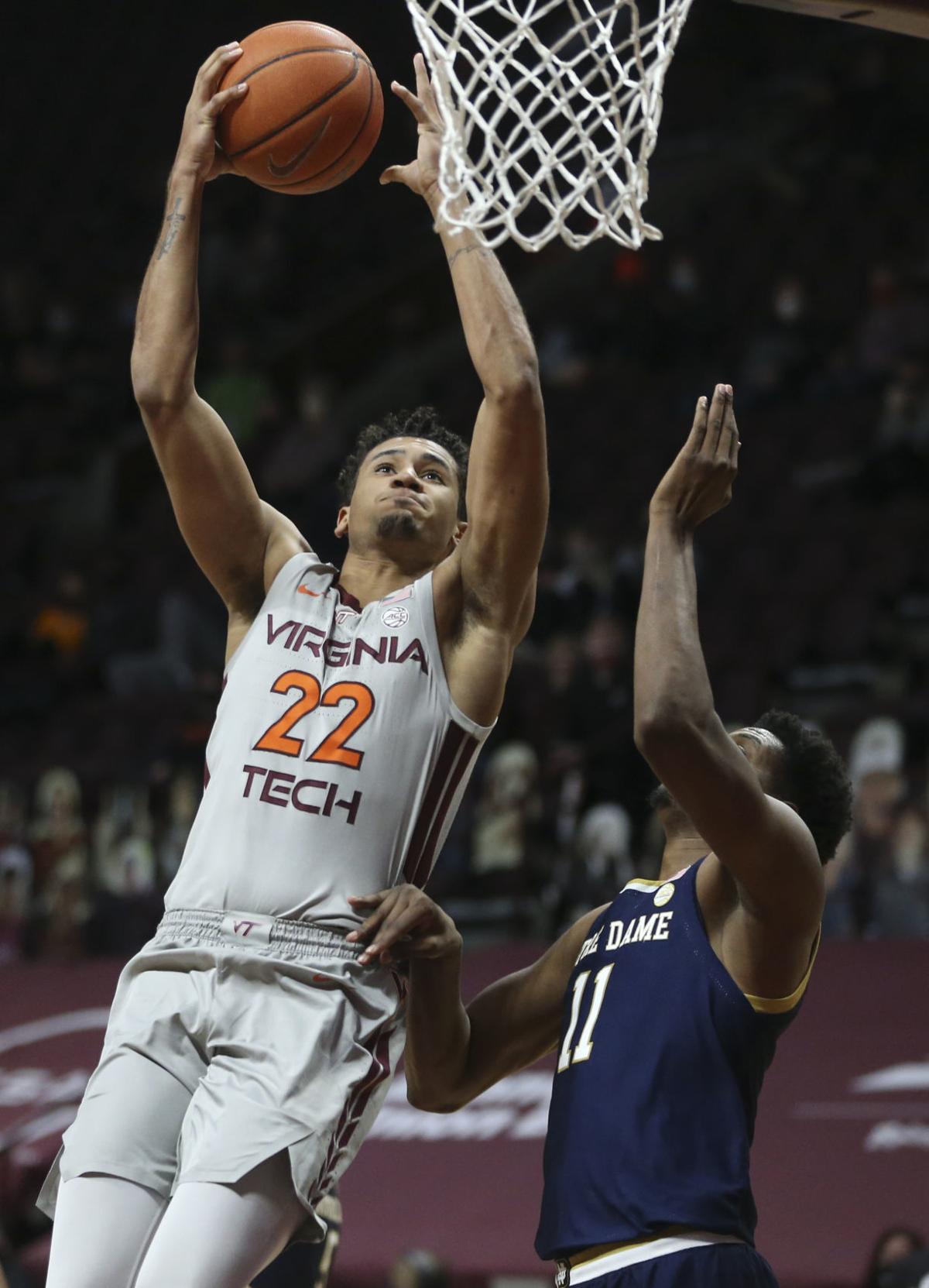 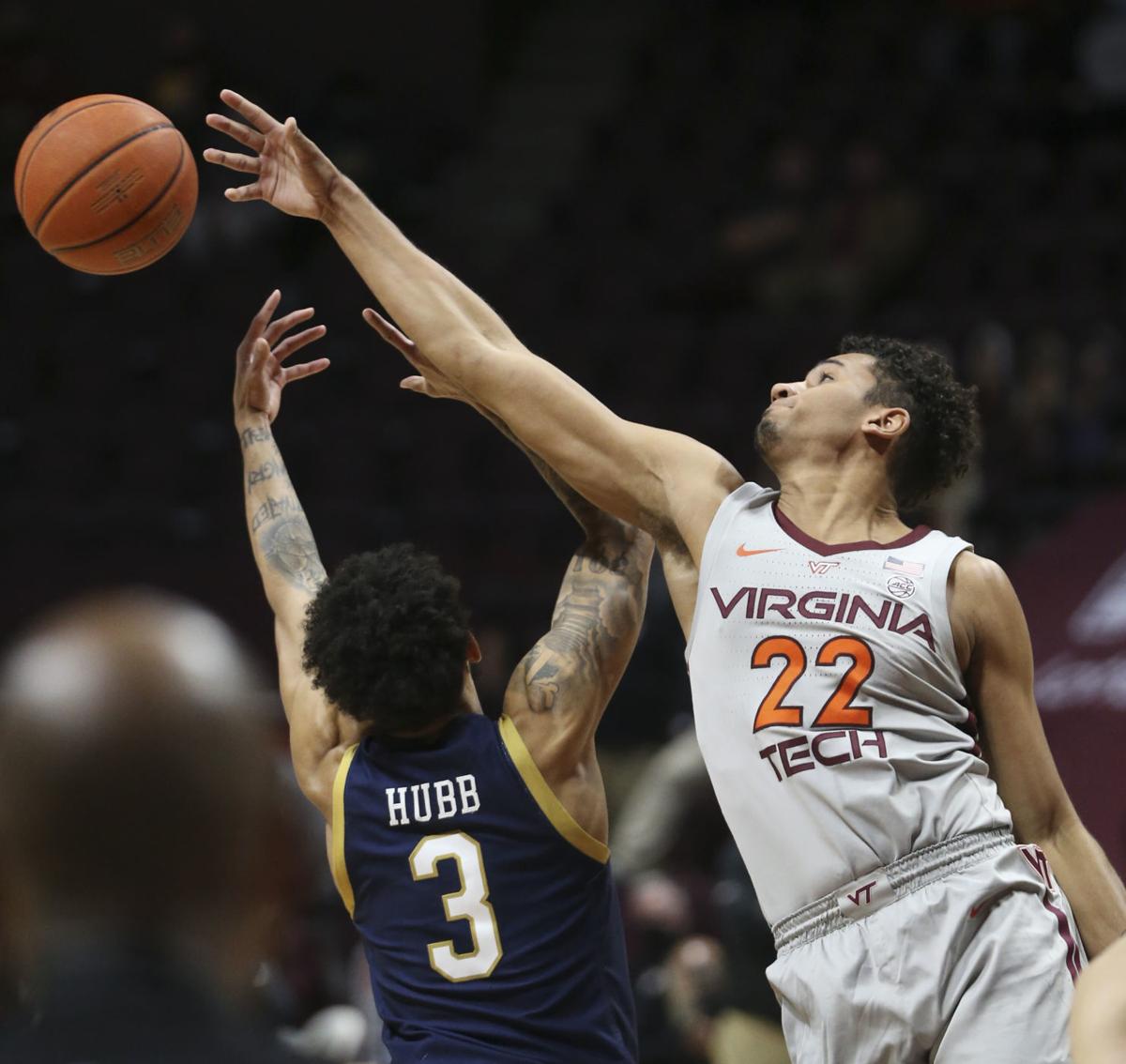 Virginia Tech’s Keve Aluma, right, knocks the ball away from Notre Dame’s Prentiss Hubb,, left, in the first half on Jan. 10.

BLACKSBURG—Going into this basketball season, Mike Young expected his Virginia Tech team to be far more competitive rebounding than it was a year ago. The Hokies had assembled a far bigger and deeper frontcourt than they had in Young’s first season.

This group, Young thought, wouldn’t be dominated on the glass night in and night out. Sunday night, in fact, No. 19 Virginia Tech did the dominating, controlling the rebounds and holding off Notre Dame for a 77-63 win.

“That was a big focus,” said guard Jalen Cone, who led Tech with 18 points. “I don’t think we walk out this game with a win without our frontcourt playing the way they played and getting all the rebounds they did.”

Forward Keve Aluma posted his first ACC double-double, scoring 15 points and grabbing 12 rebounds, helping Tech to a 41-24 rebounding edge. The Hokies finished with 16 offensive rebounds, the most in ACC play in Young’s two seasons at Tech.

Outrebounded 71-58 in the previous two games, a win over Miami and Wednesday’s loss at Louisville, Tech emphasized that Sunday night. In addition to Aluma’s work, the Hokies got eight rebounds from Tyrece Radford and seven from Justyn Mutts.

“I just hated just getting mauled on the glass night in, night out, a year ago,” Young said. “I knew that that part of it would be better with this team, but it’s got to be every time out.”

Guard Hunter Cattoor scored 15 points for Tech and played a strong defensive game, taking a pair of charges. Cattoor hit two 3-pointers in the final 10:25 of the game, including the finisher with 2:33 to play that put Tech up by 11.

“He got two big shots down,” Young said. “That boy, he played, really, a good ballgame. I thought his overall play in 26 minutes was pretty special and went a long way to helping us win.”

Tech’s defense clamped down in the second half, holding Notre Dame to 2-for-19 shooting from the floor, including a 1-for-10 showing from 3-point range.

“We didn’t adjust a darn thing,” Young said. “We guarded in the second half the way we wanted to guard in the first half. We communicated much better. We were able to keep a body on a body. We had a couple of text-book possessions.”

Wednesday night in Louisville, Virginia Tech (9-2, 3-1 ACC) tried to surge back at the end of a game only to come up short.

Sunday night at home, the basketball shoe was on the other foot for the Hokies, trying to hold off Notre Dame (3-7, 0-4).

The Hokies led 60-53 with 9:10 to go and never let Notre Dame get closer, holding on to pick up an important ACC win heading into Tuesday night’s game against No. 21 Duke.

Cattoor’s straight-away, step-back 3 as the shot clock wound down helped seal a game that was close most of the night.

Notre Dame jumped out to a 12-6 lead as Tech committed three turnovers in the first five minutes. The Hokies tied the game 21-21 with 10:46 to go in the half after back-to-back 3-pointers by Cone and Cattoor.

While Cone canned his first shot from 3-point range, overall the Hokies went just 1 for 5 to open beyond the arc.

Cone finished the half 4 for 7 on 3-pointers, but his teammates went just 1 for 7 in the opening 20 minutes.

But Tech opened the second half on an 8-0 run, going up 43-42 on a layup by Radford with 16:26 to play, positioning itself for its fifth straight home win and fifth win in its last six outings overall.

It didn’t take long after the win for the players to shift their focus to Duke.

“We start thinking about them tonight,” Aluma said.

Virginia waltzed into Littlejohn Coliseum on Saturday and demolished Clemson, using an elite defensive performance and glorious 3-point shooting to beat the No. 12 Tigers.

Sam Hauser came one rebound shy of his fourth consecutive double-double, Jay Huff calmly drained four shots from beyond the arc and Casey Morsell looked like the best version of himself on both ends as UVa cruised by Notre Dame.

Virginia Tech’s Nahiem Alleyne shoots over Notre Dame’s Dane Goodwin in the first half of the Hokies’ home win.

Virginia Tech’s Keve Aluma, right, knocks the ball away from Notre Dame’s Prentiss Hubb,, left, in the first half on Jan. 10.