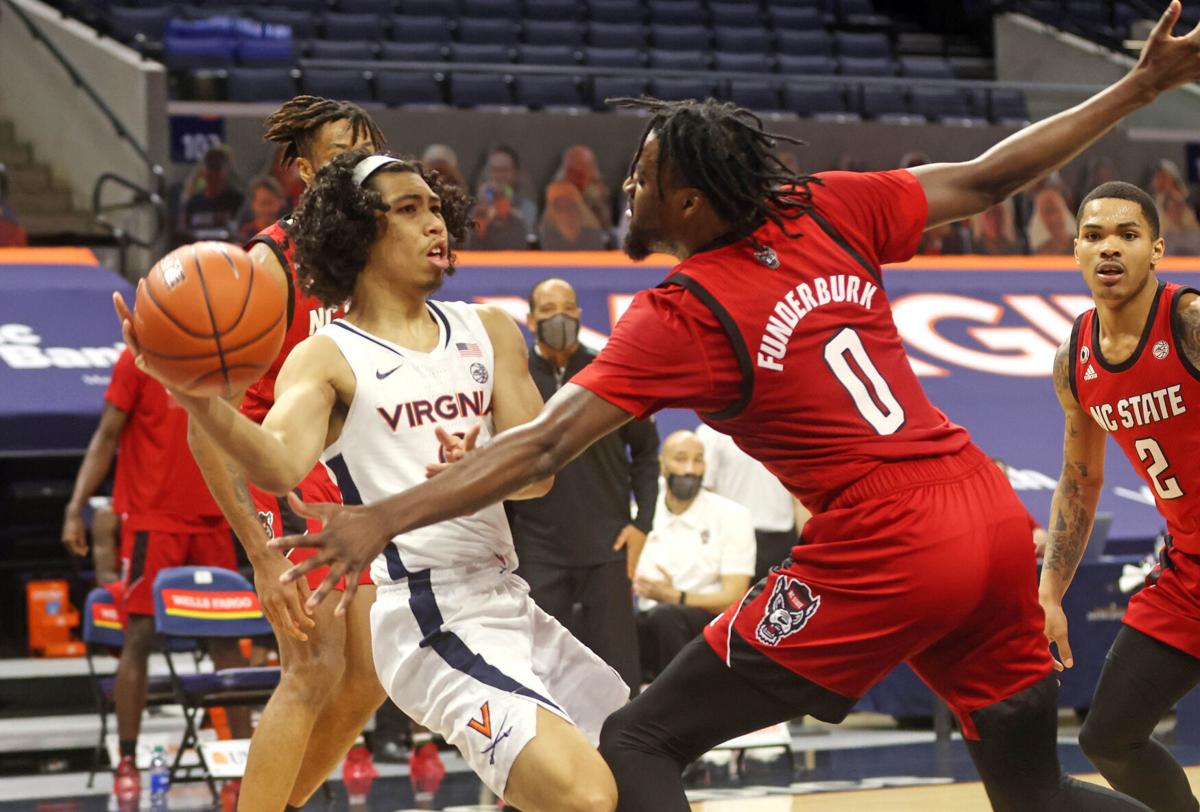 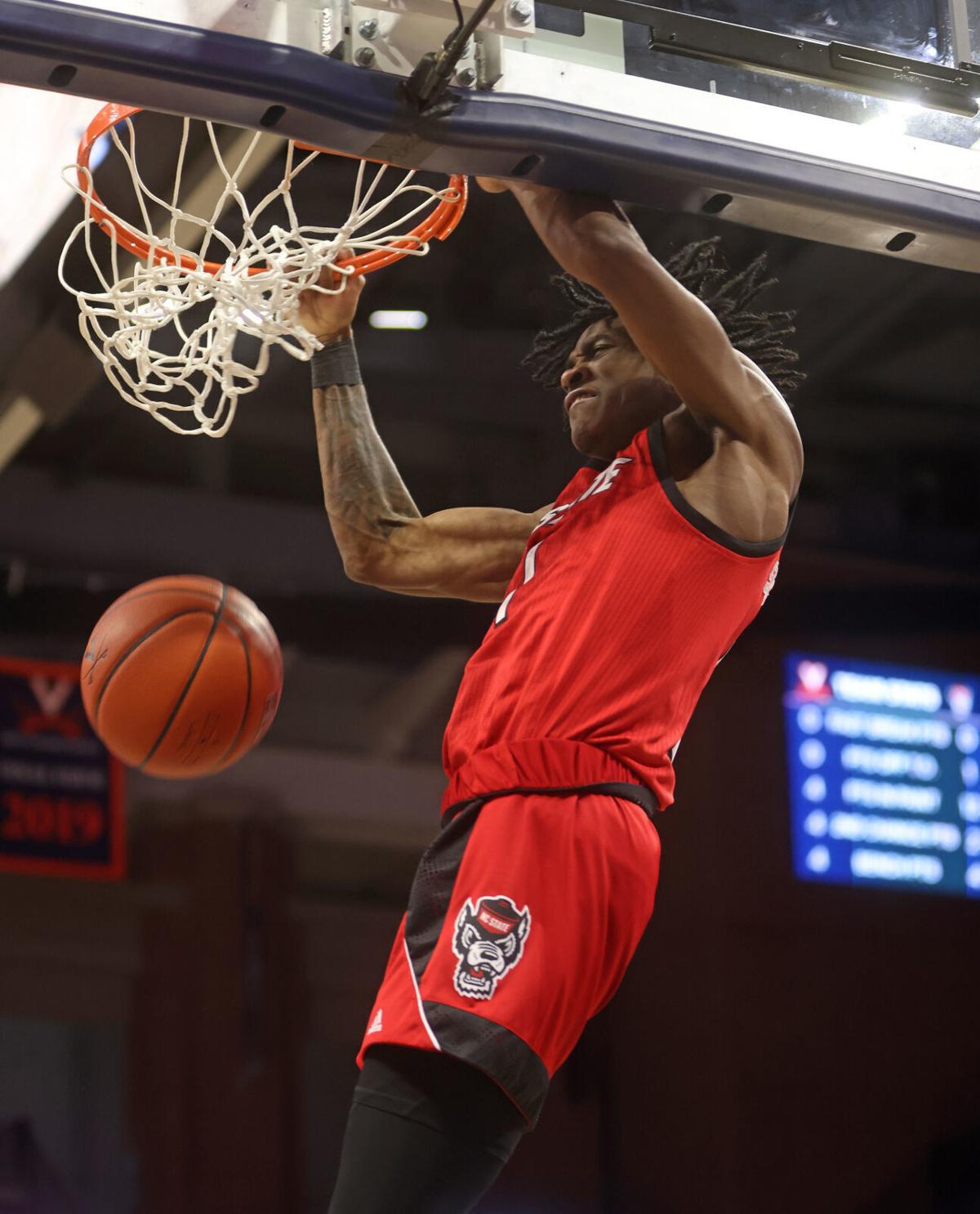 Floundering at both ends of the floor, the No. 15 Cavaliers fell 68-61 to North Carolina State on Wednesday at John Paul Jones Arena, losing their third straight game and falling at home for the first time this college basketball season.

Virginia (15-6, 11-4) went to Raleigh on Feb. 3 and beat the Wolfpack 64-57. But that was three weeks ago and this is a very different looking UVA team now, one struggling to defend the paint defensively, and enduring long scoring droughts offensively.

This is just the third three-game slide for UVA in the last five seasons. The Cavaliers, who are off this weekend and host Miami on Monday night, haven’t lost four in a row since February, 2017.

With heightened COVID-19 precautions on campus, UVA had no fans in attendance Wednesday, not even the small contingent of family and friends it had been allowing. An empty arena witnessed a largely empty performance.

The Cavaliers came out characteristically cold, and needed 3:40 to score their first points, on an inside basket by Huff. The Wolfpack jumped out to a 17-4 lead with 11:08 left in the half.

Virginia missed 11 of its first 13 shots and its first eight attempts from 3-point range. It trailed by as many as 14, down 24-10 with 6:05 to go before halftime, before fighting back into the game. At one point, a personal 6-0 run by Huff cut the Wolfpack edge to 25-21, and the Cavaliers went to the locker room down by a manageable count of 29-23.

Still, it was a flawed half for the ‘Hoos on both ends of the floor. Offensively, though it cut down on turnovers, committing only three, Virginia shot 10 for 27 from the floor and 1 for 9 from 3-point range. They drew just two fouls in the first 20 minutes of play.

Defensively, North Carolina State scored 18 of its 29 points in the paint and shot 12 for 25 before the break.

The Cavaliers turned things around out of the gates in the second half. Hauser hit back-to-back 3-pointers to tie the game 29-29 and North Carolina State’s first three possessions were fruitless.

State regained command during a 12-2 run highlighted by a corner 3-pointer by Braxton Beverly. That came during another cold-spell for the UVA offense in which it missed eight of nine shots and allowed the Wolfpack to go up 45-37.

Virginia stayed close the rest of the way, led by Hauser and Huff, but never really threatened to take the lead. It trailed by four, 65-61, with 15 seconds left when Hauser’s long 3 bounced around the rim but rolled off.

It got 40 of its 61 points from its two redshirt senior forwards.

The strange disappearance of Trey Murphy III continued. Despite UVA playing its second straight game without senior guard Tomas Woldetensae, who is out due to COVID-19 contact tracing, the Rice transfer was a non-factor.

After taking just two shots in Saturday’s loss at Duke, Murphy III was 1 for 3 in the first half and didn’t start the second, when UVA turned to a big lineup with sophomore forward Francisco Caffaro instead.

Murphy III finished 1 for 5, including an 0 for 4 showing from beyond the 3-point arc, before fouling out with 8.6 seconds to go.

Former Virginia Tech soccer player sues coach, claiming she was forced off team for refusing to kneel before games

The coach engaged in a “campaign of abuse and retaliation” that led her to leave the program, the player said.

Virginia Tech is looking to upgrade its athletics programs with more financial support from donors.

Former Virginia Tech soccer player sues coach, claiming she was forced off team for refusing to kneel before games

She alleges that, during halftime of the Sept. 12 season opener at UVA, “Coach Adair berated Hening for her stance."

The arena would get a new look both inside and out.

With the Virginia baseball team sitting on NCAA Tournament bubble, every game matters down the stretch

'It's a miracle': Three years after his pancreatic cancer diagnosis, UVa catcher's father ready to watch him play in person for the first time

Three years ago, UVa catcher Logan Michaels' father, Jeff, was diagnosed with pancreatic cancer. On Friday, Jeff will be on hand to see his son suit up for the Cavaliers in Charlottesville for the first time. “It’s a miracle.”

Virginia Tech football wraps up spring that was focused on turnovers

Tech’s five defensive fumble recoveries were the fewest for the program since at least 1987, so the Hokies have stressed stripping the ball in drills and scrimmages.

Two of the three finalists represent schools that have never produced a Dudley winner. The awards show will air Saturday night on CBS 6.