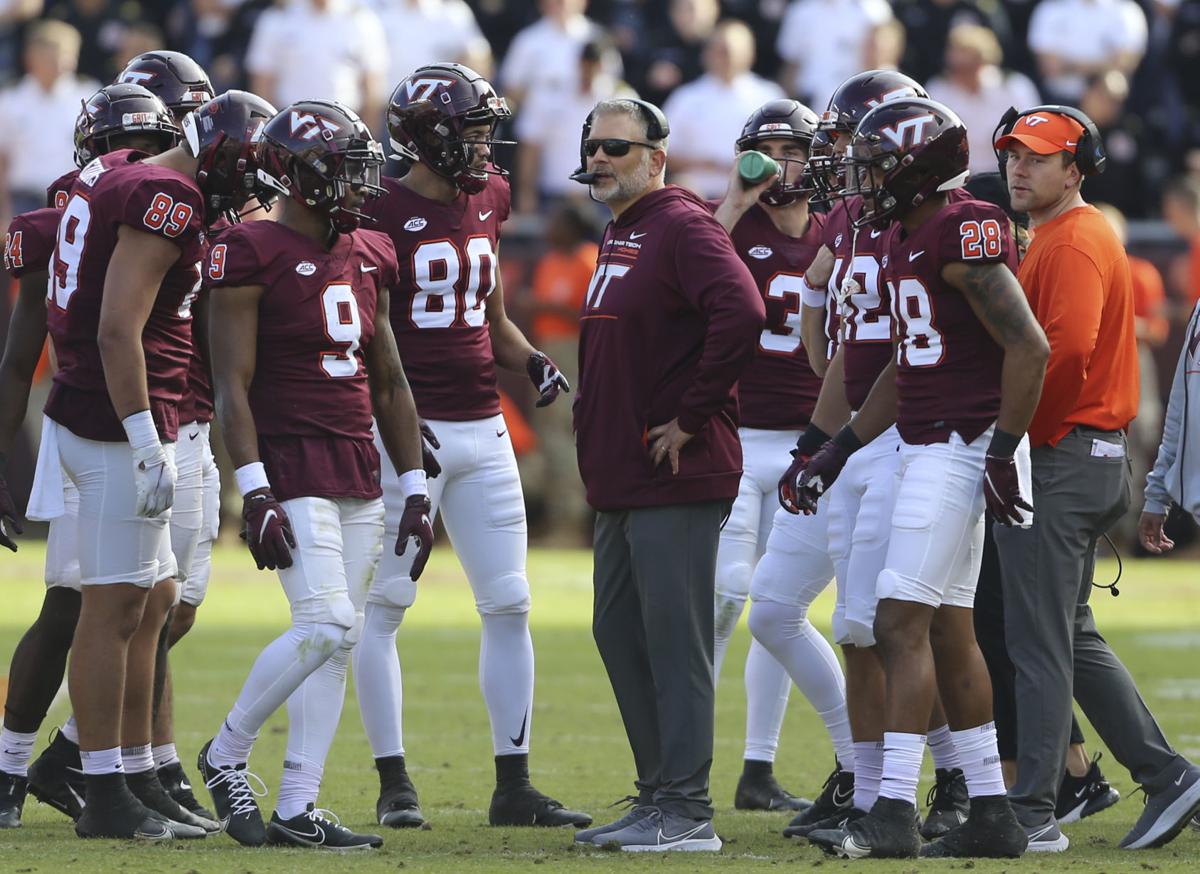 Virginia Tech head coach Justin Fuente huddles with his team in the final minutes of Saturday's game against Syracuse.

Virginia Tech coach Justin Fuente disputed an official’s call Saturday, when the Hokies suffered their third consecutive home loss. Tech is 22-22—and 15-14 against the ACC—since the start of the 2018 season.

Scores responded, with near-universal themes: You have no reason to apologize; Hokie Nation has your back; ignore the negativity.

Indeed, the pessimism surrounding the program is rampant. Tech (3-4, 1-2 ACC) is sliding toward its third losing season in four years, an outcome that almost certainly would end Justin Fuente’s head-coaching tenure in Blacksburg, a tenure that began so auspiciously in 2016 with the ACC Coastal Division title.

The prevailing question now isn’t whether the 2021 Hokies can win the Coastal but whether Fuente can earn a seventh season leading the program.

With sports gambling all the rage, let’s assess his plight in handicapping parlance: He’s a 17-point underdog.

Perhaps that’s a harsh portrayal of a coach with a 41-30 record. But big whistles are, and should be, judged on far more subtle facets than overall wins and losses.

What are the trend lines? Are you recruiting well? How is your game and roster management?

Not to suggest ceding control of the program to fans, but do they have faith in you? Is your team prepared and motivated?

The good: These Hokies have played their backsides off in every game, and Fuente’s collection of recruits for next season ranks 20th nationally in 247 Sports’ composite ratings.

The suboptimal: Since Fuente’s first two Tech squads finished a combined 19-8, the Hokies are 22-22, 15-14 versus the ACC. As Fuente and Tech athletic director Whit Babcock acknowledge, that’s not good enough.

Worse yet for Fuente, and compounding fan angst, is rival Virginia’s corresponding resurgence under Bronco Mendenhall. UVA is 28-17 in the past three-plus seasons, 18-13 against the ACC.

The last time the Cavaliers won more games than the Hokies in a four-year stretch was 1992-95.

Another jarring contrast: While Tech again lacks a consistently productive quarterback—think Braxton Burmeister, Hendon Hooker (now thriving at Tennessee) and Ryan Willis—UVA again has a record-setter at the position. Brennan Armstrong was groomed to succeed the electric Bryce Perkins, and the transition has been virtually seamless.

Game-management hiccups also have riled up the faithful. Last year’s defeat to Liberty and this season’s to Notre Dame were most glaring and part of extended home losing streaks.

In Frank Beamer’s 29 seasons as coach, the Hokies endured two skids at Lane Stadium of at least three games, in 1988 and ’92. There were none in his final 23 years steering the program.

Tech’s current three-game home losing streak—to Notre Dame, Pitt and Syracuse—is the third in the past four seasons under Fuente.

The Orange (4-4, 1-3) are better than last season, and Sean Tucker is the ACC’s premiere running back. But the optics of losing to an opponent that had dropped 10 consecutive conference games and hadn’t defeated a Power Five opponent on the road in two years are brutal.

Many Hokies faithful already were discouraged, and Saturday’s defeat entrenched that position. Hard to blame them.

On an afternoon when the offense, a liability all season, scored four touchdowns against a Power Five opponent for the first time, the defense played its worst game, yielding two touchdowns in the final 2:30. Even the kickoff coverage unit, a staple of Fuente’s head-coaching career, failed at the worst time.

After Malachi Thomas’ 47-yard touchdown burst gave the Hokies their largest lead at 36-27, Trebor Pena returned the ensuing kickoff 51 yards to Tech’s 45, flipping the field and momentum. Syracuse pounced on the excellent field position and scored in seven plays.

Pena’s return was the longest by an opponent in Fuente’s 10 seasons as a head coach, four at Memphis and the past six at Tech. Prior to that critical sequence, opponents had returned only four of John Parker Romo’s 32 kickoffs all year—none for more than 23 yards.

The afternoon bordered on real-life Whac-A-Mole. The moment one phase corrected course, the others careened into a ditch.

West Virginia, Notre Dame, Syracuse: The Hokies could have won all three and should have won the latter two. Instead, they lost all three.

“I think we have a great group of young people that deeply care about Virginia Tech, and maybe more importantly, care about each other,” Fuente said Monday. “They have strained and held on tight and done everything that they can to try and get rewarded for their effort. We’ve come up a little bit short three times. We’re asking them to continue to hold and strain, knowing that their rewards are coming.”

With five games remaining, all in conference, Tech could still finish the regular season 8-4, a record most believed in August would secure Fuente’s job. But the Hokies haven’t won five consecutive games, all against ACC opponents, since 2011.

Quarterbacked by Logan Thomas, that team won the Coastal Division, showcased the ACC player of the year in running back David Wilson and was invited to the Sugar Bowl.

That team isn’t walking through the door.

This group is 1-4 against the Power Five. This group ranks 13th among 14 ACC teams in scoring, yards per game and yards per play, not where you should be in Year Six with a coach renowned for offense.

This transpires frequently at all levels of sports: Successful coaches see their programs, for various reasons, decline/plateau, and no matter what remedies they try, nothing seems to work.

This doesn’t mean they contracted amnesia. It means that most coaches have a shelf life and that darn few exit a job or career at their peak.

It means that separation is often best for both parties, and that feels like where Justin Fuente and Virginia Tech are headed.

Georgia won its first national title in 41 years, defeating Alabama 33-18 in the College Football Playoff championship. The Bulldogs shot down the top-ranked Crimson Tide in a fourth quarter rally. Here's the latest, in photos.

CHARLOTTESVILLE – Virginia got bullied and battered in Saturday’s loss at North Carolina. Francisco Caffaro wasn’t about to let it happen again.

When Brent Pry was an assistant coach at Penn State, he showed interest in Jason Brown but ultimately didn’t offer the Chancellor High School …

CHARLOTTESVILLE –When he was introduced as Virginia's next football coach last week, Tony Elliott laid out his vision of what the program could become.

Georgia wipes away 41 years of frustration

After 41 agonizing years, the Georgia Bulldogs were not about to let another championship slip through their fingers.

Reigning national champion Baylor isn’t showing any sign of loosening its grip on No. 1.

Virginia Tech head coach Justin Fuente huddles with his team in the final minutes of Saturday's game against Syracuse.

Virginia Tech coach Justin Fuente disputed an official’s call Saturday, when the Hokies suffered their third consecutive home loss. Tech is 22-22—and 15-14 against the ACC—since the start of the 2018 season.