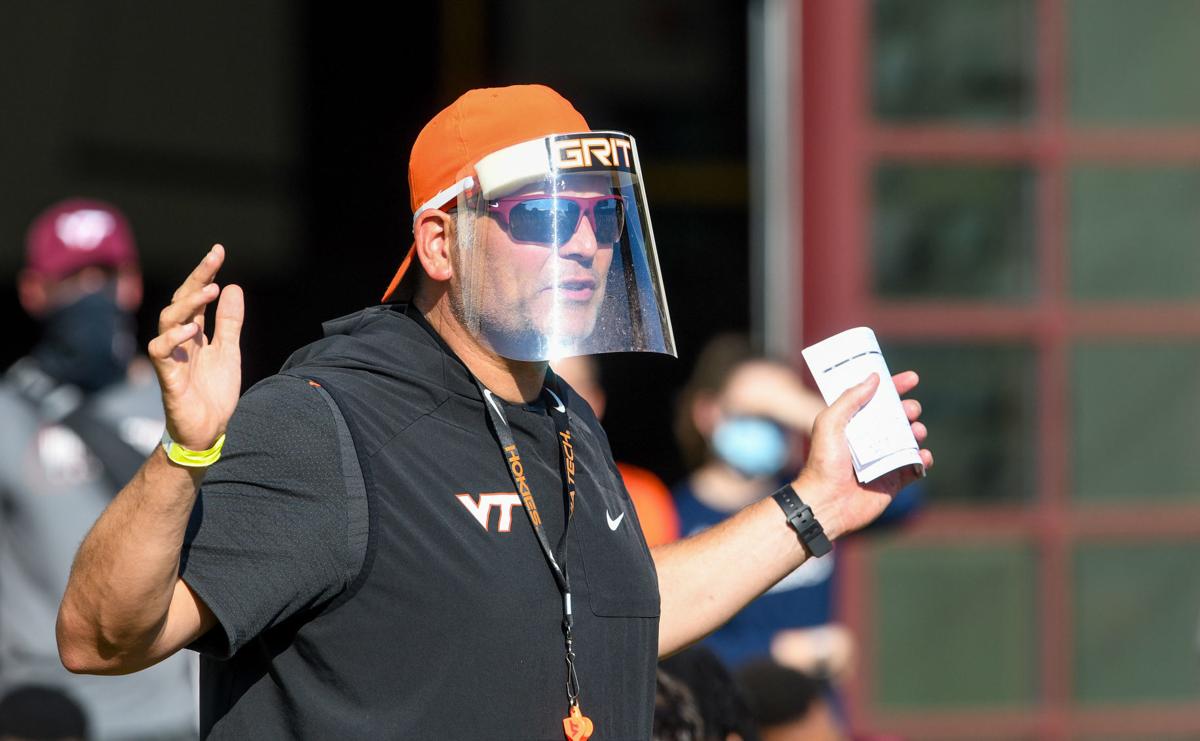 The Hokies committed themselves to safety protocols in practices, like the face guard worn by strength and conditioning coach Ben Hilgart, but an outbreak on campus still infiltrated the team. 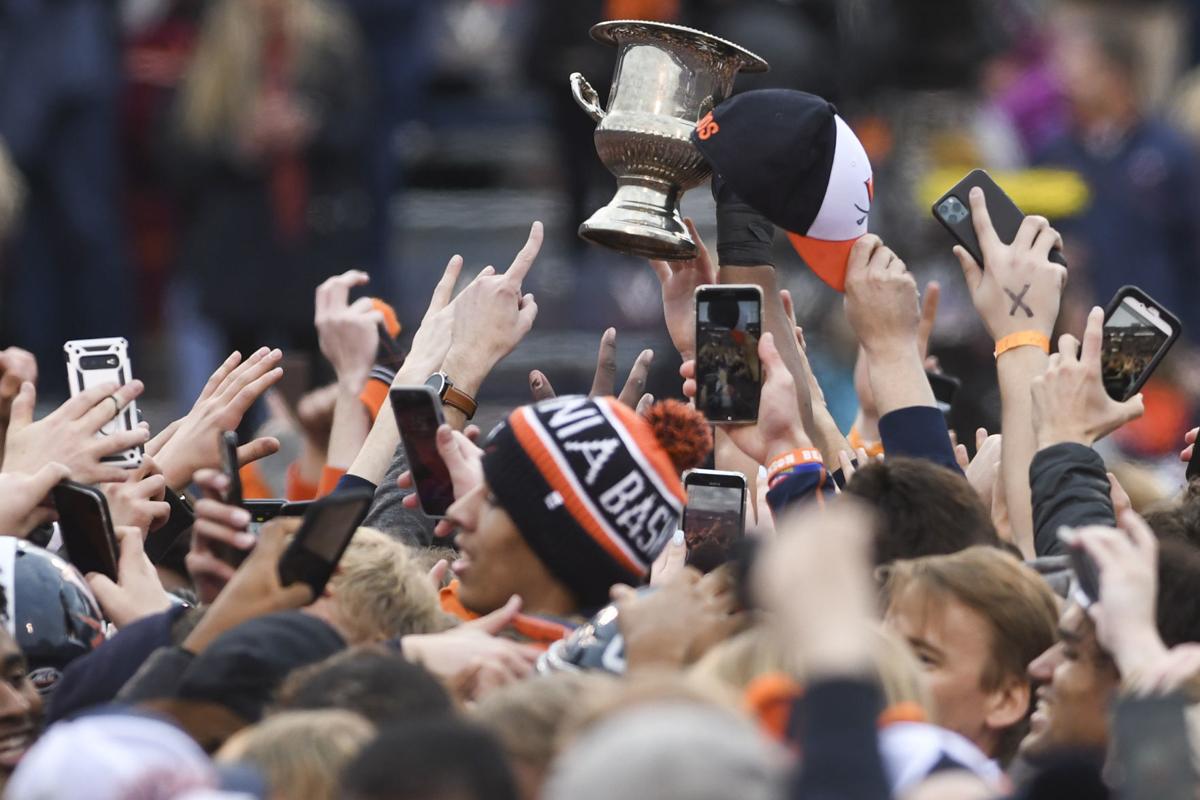 MICHAEL SHROYER | Special to The Roanoke Times Nov. 29, 2019 Virginia Cavaliers fans celebrate with the Commonwealth Cup following the victory against the Virginia Tech Hokies at Scott Stadium in Charlottesville, Va.

The annual rivalry game between Virginia and Virginia Tech has been rescheduled for Dec. 12 in Blacksburg, the latest the Hokies and Cavaliers have ever met on the football field.

The game was originally slated for Sept. 19 at Tech but had to be postponed after positive COVID-19 tests and quarantine tracing left the Hokies too shorthanded to field a team. Thursday, the ACC announced the new date and said a kick off time and television information would be revealed at a later date.

The league’s championship game is currently scheduled for Dec. 12 or 19.

“We would settle for any date, and that one at the end of the season would shape up nicely. If there’s a way we could do it earlier, we would like that, too,” said Babcock.

Babcock said that he had been in contact with ESPN about the possibility of hosting the network’s popular GameDay show on Sept. 19.

The Hokies had won 15 straight games against UVA before last year’s 39-30 Cavaliers’ victory in Charlottesville.

The delay until December could help cool tempers that flared after the postponement’s announcement. UVA players and coaches took to social media, most lauding the Cavaliers’ success of keeping their program healthy, some chastising the Hokies for not being similarly effective.

The latter led to predictable clap backs from some in the Tech camp, including one particularly heated Twitter exchange between Virginia linebacker Charles Snowden and Hokies wide receiver Tre Turner.

Questions were raised about Tech’s safety protocols back in August when star cornerback Caleb Farley opted out of the season, then authored an essay for the website ProFootballTalk in which he wrote, “I started having deep concerns about staying healthy. Guys were going home, going to Myrtle Beach, coming back to campus, and we weren’t getting tested. We’re all together, working out, close to each other, and you have no real idea who might have it, if anybody might have it. One day I looked around, and we were like 100-deep in our indoor facility, no masks. My concern grew more and more.”

Tech officials countered Farley’s concerns by stating the team’s indoor facility was being used as an outdoor structure with the large garage doors on the sides open.

“I believe we’ll have a year of college basketball that people will enjoy,” North Carolina coach Roy Williams said.

‘That had me really hyped’: Virginia Tech quarterback Hendon Hooker running with confidence

Though his coach is less enthusiastic about the risk taking, Hendon Hooker got a charge out of taking the ball to the end zone.

On Wednesday, the Naismith Memorial Basketball Hall of Fame and Gazelle Group announced a season-opening event that will occur at Mohegan Sun Arena in Connecticut, and the Cavaliers are one of the four teams included.

WINSTON-SALEM — Virginia Tech just couldn’t get out of its own way on Saturday at Truist Field.

Justin Fuente makes it clear No. 19 Virginia Tech has many areas in which it needs to improve.

COLUMBUS, Ohio—Justin Fields completed 20 of 21 passes for two touchdowns and ran for another, Master Teague III rushed for a pair of scores a…

The Hokies committed themselves to safety protocols in practices, like the face guard worn by strength and conditioning coach Ben Hilgart, but an outbreak on campus still infiltrated the team.

MICHAEL SHROYER | Special to The Roanoke Times Nov. 29, 2019 Virginia Cavaliers fans celebrate with the Commonwealth Cup following the victory against the Virginia Tech Hokies at Scott Stadium in Charlottesville, Va. 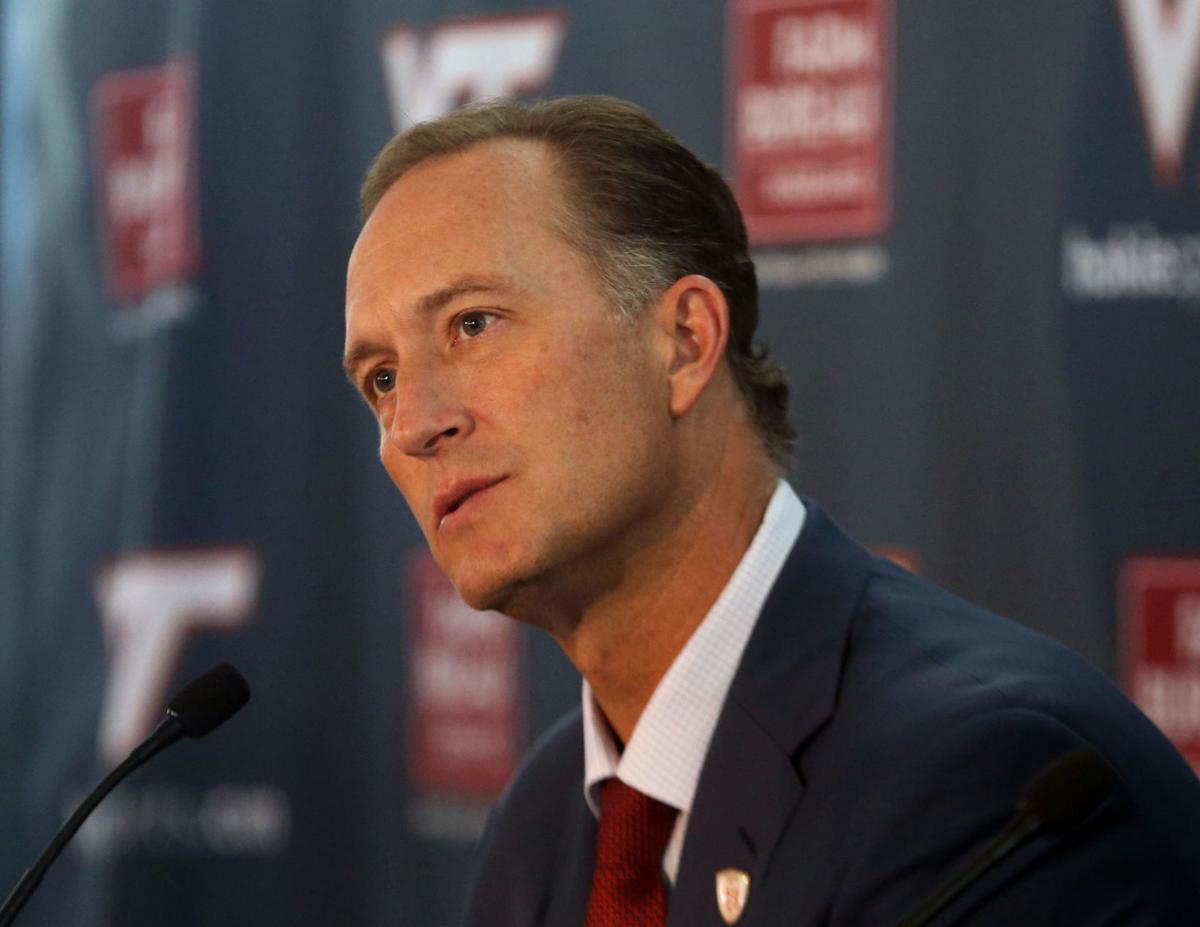