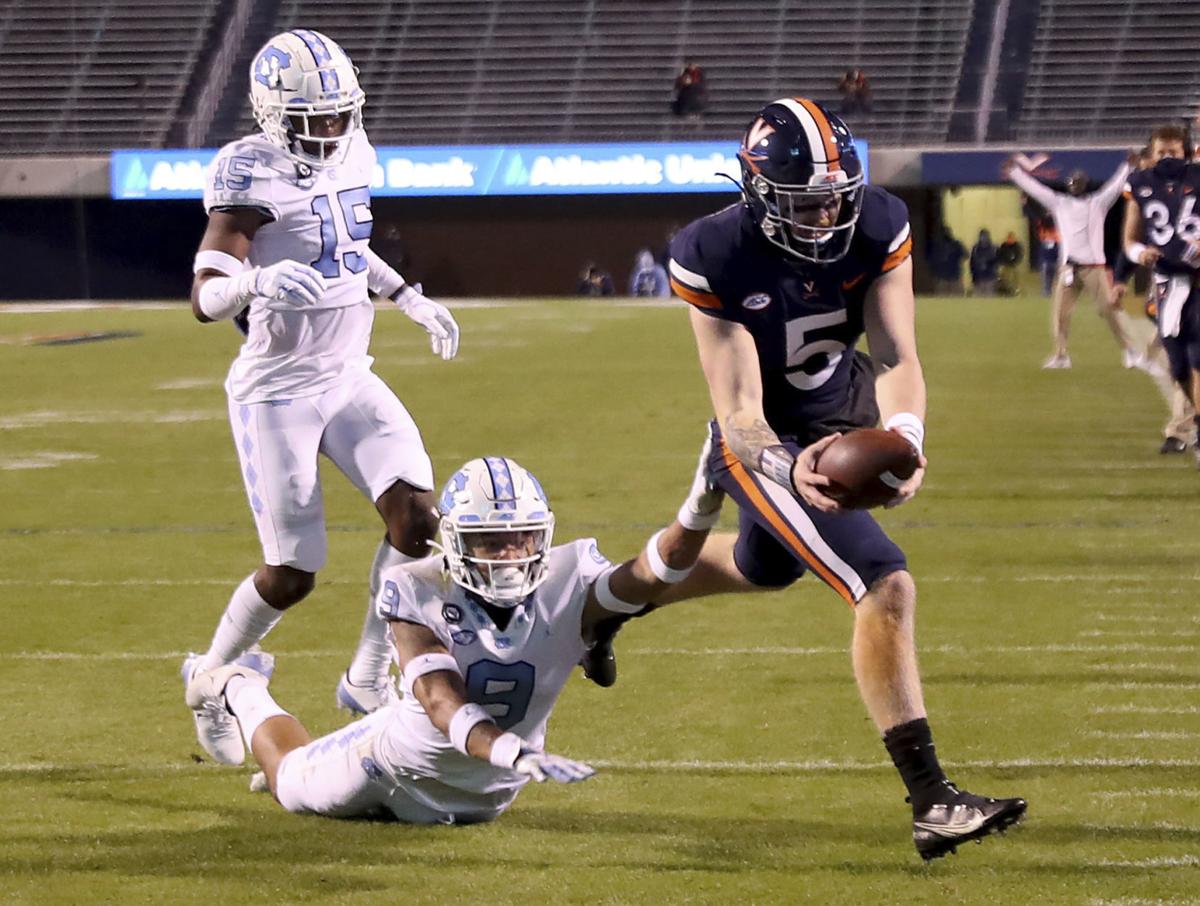 Virginia quarterback Brennan Armstrong (5) reaches for the end zone during the Cavaliers’ victory over North Carolina last season. UVA will look for its fifth consecutive win against the Tar Heels on Saturday night. 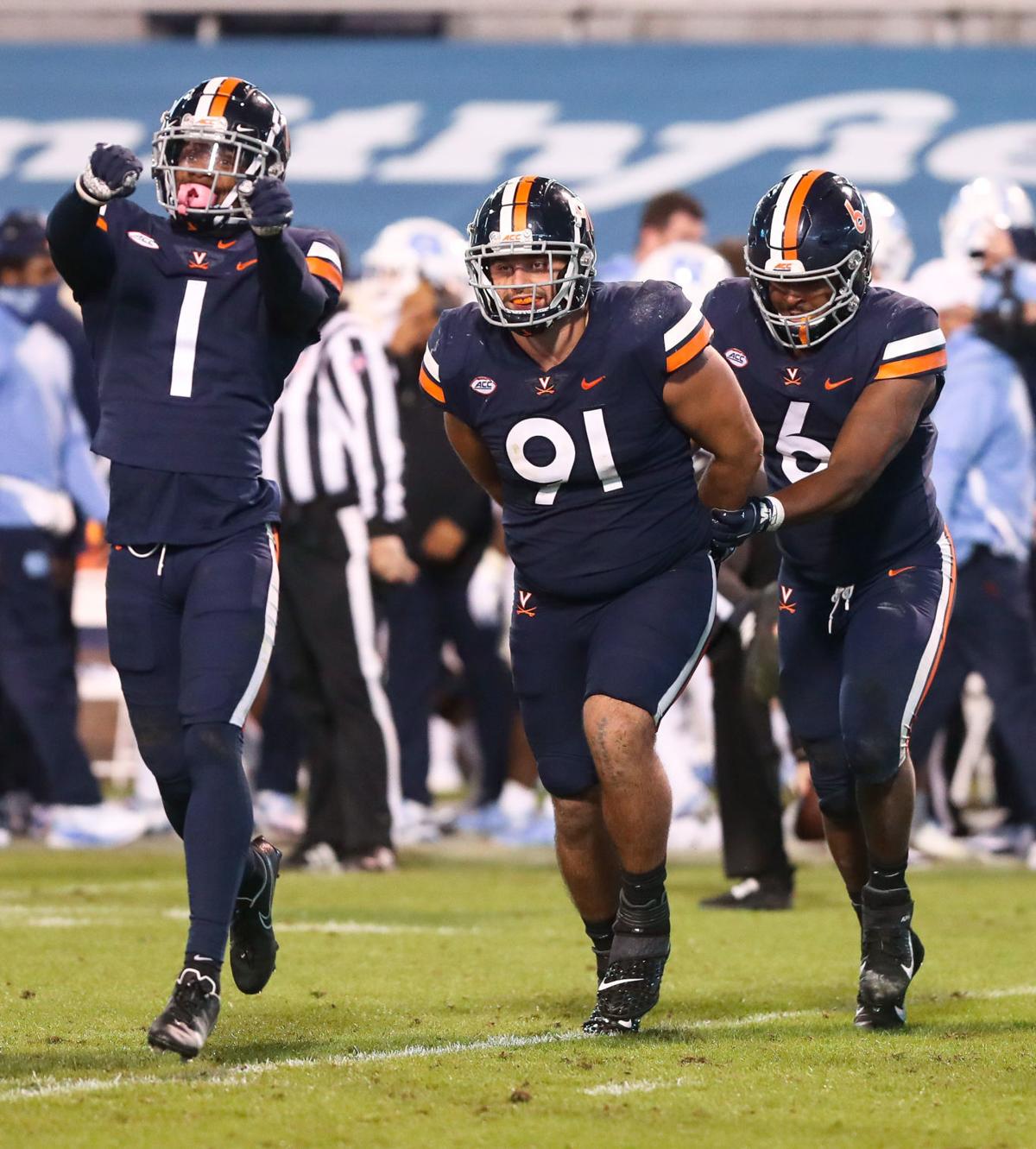 Virginia defense celebrated a fumble recovery in the Cavaliers’ 44-41 win over ACC foe North Carolina at Scott Stadium in 2020.

CHARLOTTESVILLE—When North Carolina’s coaches turn on the video of last year’s loss to Virginia, they see their players being beaten physically by the Cavaliers. It’s been a point of emphasis for the Tar Heels this week as they get ready for Saturday night’s pivotal ACC Coastal Division showdown with UVA.

So while Mack Brown and his staff spoke Monday about making sure that doesn’t happen again, Virginia senior defensive end Mandy Alonso said his team knows what to expect from its opponent.

“They always try to come physical,” Alonso said. “It’s our culture versus theirs. We’re going to go harder, longer each play and the whole game than they will. Even if they come out swinging, we just have to be able to sustain it and we know they can’t sustain it, because the past four years, they haven’t been able to.”

Alonso is 4-0 against UNC in his college career, and he and his fellow fifth-year seniors are eager to keep that streak going. Those games have been competitive affairs, each decided by 10 points or fewer, three by a touchdown or less.

Last season, Virginia led by three TDs in the third quarter, then held off a Sam Howell-led Tar Heel rally for a 44-41 victory.

“They were more physical than we were,” Brown said Monday. “We had to battle just to stay in the game.”

Brown’s assistants said they don’t have to remind their players that Virginia (2-0) was the tougher team a year ago. They just have to point to the television screen and sit back.

“We’re watching film from last year and they blocked us,” said Jay Bateman, UNC defensive coordinator and a Glen Allen native. “This game eventually always comes down to whipping blocks, right? You either get blocked or you get off blocks.”

The streak—Virginia’s desire to keep it going and Carolina’s drive to end it—makes for an intriguing side story this week, but for both teams, Saturday night’s game could define their season. The Tar Heels (1-1) opened the year ranked No. 10 in the nation and were the preseason favorites to win the Coastal Division.

Then came a 17-10 loss to Virginia Tech in Blacksburg, a defeat that dropped UNC in the polls and all but buried Howell’s Heisman hopes in a six-sack barrage. He threw a career-high three interceptions.

North Carolina can ill afford a second division loss if it hopes to remain in the title race.

Brown believes his Heels—now ranked No. 21—took a step forward in their 59-17 routing of Georgia State, a game in which Howell threw for 352 yards and three touchdowns and ran for another 104 yards and two scores.

For Virginia, which outscored William & Mary and Illinois 85-14 in its first two wins, a road victory in Chapel Hill would signal that its goal of defending the Coastal crown it won in 2019—there were no divisions in last year’s pandemic-impacted season—is attainable.

Both teams are well aware of what’s at stake on Saturday night. Alonso said the Cavaliers are relishing that spotlight.

“It’s a huge game, big picture,” Alonso said. “We’ve heard all the hype that UNC’s had from the media and from the top 25 rankings and such. It’s just things that we have to keep into account, that way, once we beat them, then we’ll actually be respectable or talked about on ACC Network and ‘Sportscenter’.”

Are the Green Bay Packers pretenders?

UVA has been excellent at home the past two seasons and I’m betting the defense bounces back.

Coastal Chaos in play yet again for Hokies, Hoos three games into season

When Virginia Tech opened the season with a 17-10 home win over preseason division favorite North Carolina, the Hokies instantly elevated themselves into the ACC's Coastal Division title race. It’s a race they won't run another leg in until mid-October.

College football picks: Rivalry matchups arrive early for Tech and UVA, but both are underdogs

The Hokies renew an old rivalry when they visit Morgantown for a game against West Virginia, while UVA travels to Chapel Hill for the latest installment of ‘the South’s oldest rivalry’ between the ‘Hoos and North Carolina.

“UNC outplayed us, out-prepared us and really, especially on the offensive side, took over the game.”

Virginia quarterback Brennan Armstrong (5) reaches for the end zone during the Cavaliers’ victory over North Carolina last season. UVA will look for its fifth consecutive win against the Tar Heels on Saturday night.

Virginia defense celebrated a fumble recovery in the Cavaliers’ 44-41 win over ACC foe North Carolina at Scott Stadium in 2020. 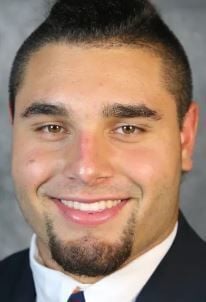