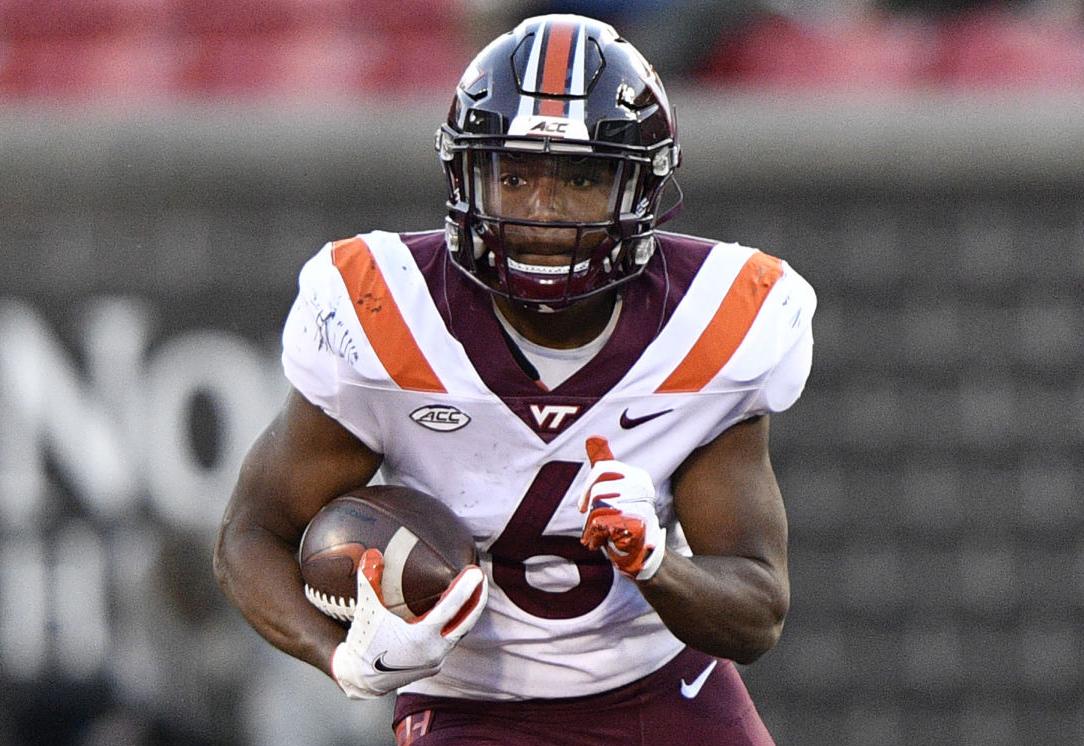 Virginia Tech running back Keshawn King, left, carries the ball against Kentucky during the Belk Bowl on Dec. 31, 2019.

By Mike Niziolek The Roanoke Times

BLACKSBURG—Virginia Tech is tentatively set to open spring camp sometime in March. The Roanoke Times is taking a look at the Hokies roster position by position before they get back to work.

Virginia Tech running back Khalil Herbert left big shoes to fill after rushing for 1,182 yards and eight touchdowns in his lone season with the team. The Kansas transfer ranked eighth among all FBS backs with 7.7 yards per carry. He was the most successful running back in Blacksburg since David Wilson nearly a decade earlier.

The good news for the Hokies is that they won’t be lacking for options in trying to replace him.

Tech has eight scholarship running backs on campus for spring camp and four more will enroll in May. Jalen Holston and Raheem Blackshear are the early frontrunners, but there is a long way to go until the season-opener against UNC in early September.

Holston waited patiently for an opportunity last fall and impressed coaches with the way he ran the ball late in the year. He had 40 carries for 189 yards on the season, but 33 of those attempts came during the final four weeks of the season with a particularly notable performance against Miami.

Coach Justin Fuente said Holston was running the ball “like he was angry” in the close loss. He had a pair of impressive touchdown runs and all 36 of his rushing yards came after contact, according to Pro Football Focus.

The bulk of Tech’s remaining experience at the position comes from Blackshear. He had 409 yards (255 rushing) with 86 touches (68 carries) last fall. He split time between running back and slot, but by the end of the season was primarily working as a wideout thanks to injuries at the receiver position.

Blackshear wasn’t the central figure in Tech’s offense that the coaching staff expected him to be when they landed him out of the transfer portal. He got off to a slow start after being sidelined from COVID-19 protocols in September and a hamstring injury after the opener.

Tech coaches are excited about Blackshear’s versatility and remain optimistic they can better take advantage of his skill set this fall.

What we don’t know

Can Keshawn King break through the pack? King flashed his explosiveness as a true freshman. He had 494 yards (340 rushing) with a pair of touchdowns including three plays of 40-plus yards.

As a sophomore, he was a non-factor on offense. Fuente was pleased with King’s contributions on special teams, but admitted the running back had an “up and down year” overall. Cornelsen was asked about the running back competition in December and described King as someone who could provide a huge spark to the team if he can take the next step.

The rest of the backs are even more of an unknown quantity. Marco Lee had three carries last fall while Tahj Gary’s four career carries all came in 2019. Jalen Hampton and Jordan Brunson didn’t take any offensive snaps as freshmen.

It would be easy to make an argument for Holston, Blackshear, King or Lee to be the center of attention this spring.

Blackshear has clear NFL aspirations and is the type of all-purpose player that most teams covet; Holston returned to form less than a year removed from suffering a season-ending leg injury in 2019; King has the explosiveness that Herbert so often brought to the field and Lee cuts an impressive figure in the weight room, but is waiting for a chance to really show what he can do at the FBS level.

If forced to pick one, Holston might get the slight edge for paying his dues, battling through various injuries and being from all-accounts a standout teammate and hard worker.

Tech has produced mixed results at running back under Fuente before Herbert’s success, but this year will give second-year running backs coach Adam Lechtenberg an opportunity to put his stamp on the team.

The Hokies have way too many running backs on their roster to give each one a fair share of carries in practice, so it will be up to Lechtenberg to narrow the competition down to make things manageable this spring and get a better look at their top options.

If a clear leader doesn’t emerge over the next six months Lechtenberg might have to go back to a running back by committee approach with the competition spilling into the season.Links

Back at home, Virginia aims to end two-game skid against N.C. State

The Cavaliers felt like the performance against Duke was decent, and they’re hopeful to build off the positives from the showing when they host N.C. State on Wednesday night.

On Wednesday, Virginia surrendered 68 points to N.C. State as it extended its losing streak to three games. The Cavaliers have allowed at least 66 points and 45% shooting in all three losses.

History was made Thursday during the Virginia baseball team’s game with North Carolina, but it wasn’t created by the players on the field.

No. 16 Virginia Tech sizzles in rout of Wake Forest

It was Tech's most lopsided ACC win ever.

No. 16 Virginia Tech falls to Georgia Tech in return to court

The Hokies had not played since Feb. 6.

Virginia Tech's lost some talent on the offensive line during the offseason, but they still have a solid foundation, here's the latest spring position preview focused on the team's offensive front

"It's nice to have everyone back in uniform and participating," Mike Young said.

MORGANTOWN, W.Va. (AP) — Austin Reaves helped No. 12 Oklahoma pull off an impressive win on the road.

Virginia Tech running back Keshawn King, left, carries the ball against Kentucky during the Belk Bowl on Dec. 31, 2019.