Virginia Tech players (from left) Hunter Cattoor, Wabissa Bede and Nahiem Alleyne and the rest of the Hokies haven’t played in 16 days.

Virginia Tech guard Hunter Cattoor (top) celebrates with teammate Justyn Mutts after Cattoor made a 3-pointer against Miami on Feb. 6. 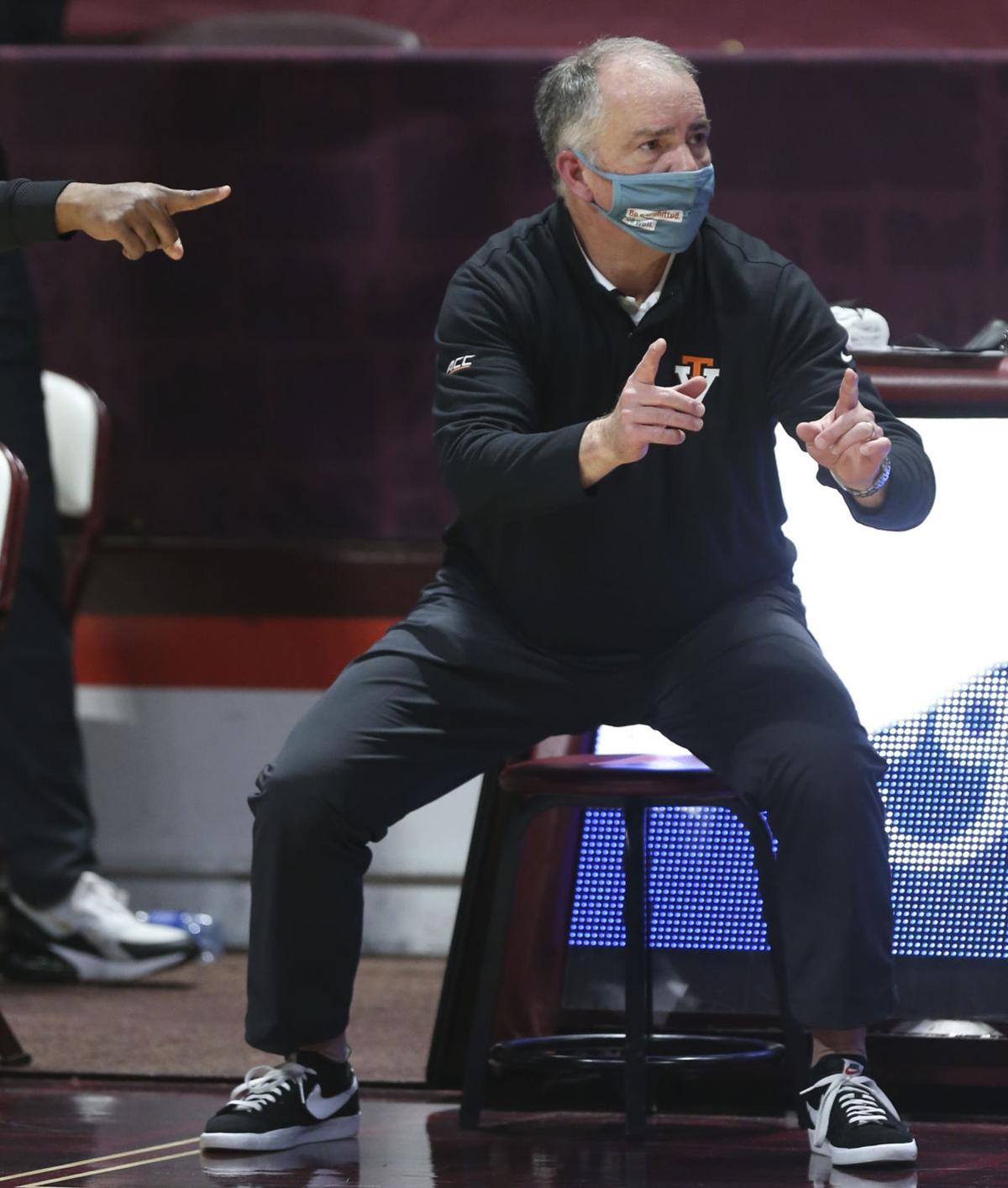 Virginia Tech men’s basketball coach Mike Young and his team will host Georgia Tech on Tuesday. It will be the Hokies’ first game since Feb. 6.

After going 16 days without playing a game, the Virginia Tech men’s basketball team will be back in action Tuesday.

How sharp the Hokies will be in their return remains to be seen.

Virginia Tech, which had to postpone last week’s games against North Carolina and Florida State because of COVID-19 issues in the Hokies’ program, will host Georgia Tech at 7 p.m. Tuesday.

“It’s nice to have everyone back in uniform and participating,” Virginia Tech coach Mike Young said Monday on the ACC coaches’ weekly video conference.

It will be the 16th-ranked Hokies’ first game since a Feb. 6 win at Miami.

“We’ve passed all of our tests and we’re ready to go,” Young said.

The Hokies (14-4, 8-3 ACC) were short-handed at some of their practices the past two weeks.

“Unlike some [teams], we always had four or five that we could work out,” Young said. “I talked to some friends that have had one or two guys that they could work out individually. … We had as few as four, sometimes five [at practice].

Young said that “for the most part,” the regulars in his playing rotation will be available Tuesday.

But Young said he is concerned about the Hokies’ conditioning on Tuesday.

“We probably scrimmaged three four-minute games … just to get them up and down [the court],” Young said. “We’ve got to get back on the floor.

“I’ve talked to so many colleagues that have gone through it. … We’ve navigated it as best we can.

“We had such great momentum after the Miami game. I thought we were playing good basketball, and we get paused.

“But … we’ve got ample time to get this thing back to a high level.”

The Hokies’ past four games were postponed.

As it turned out, COVID-19 woes also surfaced in the Virginia Tech program on Feb. 9 or Feb. 10, Young has said, forcing the program to “shut down for a bit.”

Young said last week that a couple of non-players in his program had tested positive for COVID-19 and that “too many” players were in quarantine and unable to practice because of contact tracing.

Teams have often struggled in their first game back from a layoff.

Florida State, for example, needed overtime to beat ACC lightweight Wake Forest on Feb. 13. The Seminoles had not played since Jan. 30 because of FSU’s COVID-19 pause.

“Your guys’ conditioning goes quicker than you think,” Clemson coach Brad Brownell said. “You’re not going to come back with the same juice and energy and legs.

“[And] you need to remind them of all the fundamentals.”

After another pause resulted in the Tigers’ past two games being postponed, Clemson hopes to return to action Wednesday against Wake Forest.

“Four or five days off really affects kids,” Brownell said. “You start doing some work with a guy and he hasn’t been in a defensive stance in six days, … and you’ve got four guys on your team dropping out because their backs are all tightened up.”

Louisville lost 85-48 at Wisconsin on Dec. 19. It was the Cardinals’ first game since Dec. 1 because of a pause.

The Cardinals fell 99-54 at UNC last weekend. It was Louisville’s first game since Feb. 1 because of another pause.

“You have guys that are actually coming back from having COVID, and then you have guys that just aren’t able to get in the gym with their teammates to be able to continue to practice because of the hypersensitivity of making sure the virus doesn’t spread,” Louisville coach Chris Mack said.

“There’s no substitute when you have to actually be on a basketball court reacting, catching your breath, changing ends of the floor. … You also have the challenge of just the lack of repetitions and the lack of continuity from practice to practice.

“You take one step forward and you take two steps back when you go through a pause, even it’s for a few days.”

Wake Forest beat Division II member Catawba 70-62 on Dec. 31 after not having played a game since Nov. 27 because of a pause. Six straight Wake losses followed the Catawba game.

“Our team [pause] was 33 days having zero activity,” Forbes said. “That first game back is tough. And it’s tough for a week or so or two weeks, to get those guys back in shape.

“[The problems are] the mental fatigue, the physical fatigue of the game—you’re playing probably at a faster pace. The rhythm you have on offense and defense. … Basketball’s such a timing sport.”

Two Virginia Tech players’ status for Tuesday is uncertain, but not because of COVID-19.

Jalen Cone suffered an ankle injury in the Hokies’ win at Miami.

“He’s in a splint, more for support than anything,” Young said. “He’s doing fine. I’m waiting to hear … from our medical staff to see where we are.”

Young said it remains to be seen if Tyrece Radford will return to action Tuesday. Radford was indefinitely suspended from the Hokies on Jan. 25 after being arrested by Blacksburg police a day earlier.

“That situation is still unfolding. We’ll see how it plays out,” Young said.

Notes: Georgia Tech squashed injury-plagued Miami 87-60 last weekend for its first ACC road win of the season — and for its most lopsided ACC road win ever. Georgia Tech shot 57.1% from the field, made 11 3-pointers and forced 15 turnovers. … Jose Alvarado averages 16.7 points for the Yellow Jackets, while Moses Wright averages 16.3 points and 7.5 rebounds. Michael Devoe averages 14.7 points. Ex-VMI standout Bubba Parham averages 7.7 points. … Georgia Tech ranks second in the ACC in steals (9.0 spg). … This will be the Hokies' first home game of the month.

Back at home, Virginia aims to end two-game skid against N.C. State

The Cavaliers felt like the performance against Duke was decent, and they’re hopeful to build off the positives from the showing when they host N.C. State on Wednesday night.

On Wednesday, Virginia surrendered 68 points to N.C. State as it extended its losing streak to three games. The Cavaliers have allowed at least 66 points and 45% shooting in all three losses.

History was made Thursday during the Virginia baseball team’s game with North Carolina, but it wasn’t created by the players on the field.

No. 16 Virginia Tech sizzles in rout of Wake Forest

It was Tech's most lopsided ACC win ever.

No. 16 Virginia Tech falls to Georgia Tech in return to court

The Hokies had not played since Feb. 6.

Virginia Tech's lost some talent on the offensive line during the offseason, but they still have a solid foundation, here's the latest spring position preview focused on the team's offensive front

MORGANTOWN, W.Va. (AP) — Austin Reaves helped No. 12 Oklahoma pull off an impressive win on the road.

Virginia Tech players (from left) Hunter Cattoor, Wabissa Bede and Nahiem Alleyne and the rest of the Hokies haven’t played in 16 days.

Virginia Tech guard Hunter Cattoor (top) celebrates with teammate Justyn Mutts after Cattoor made a 3-pointer against Miami on Feb. 6.

Virginia Tech men’s basketball coach Mike Young and his team will host Georgia Tech on Tuesday. It will be the Hokies’ first game since Feb. 6.